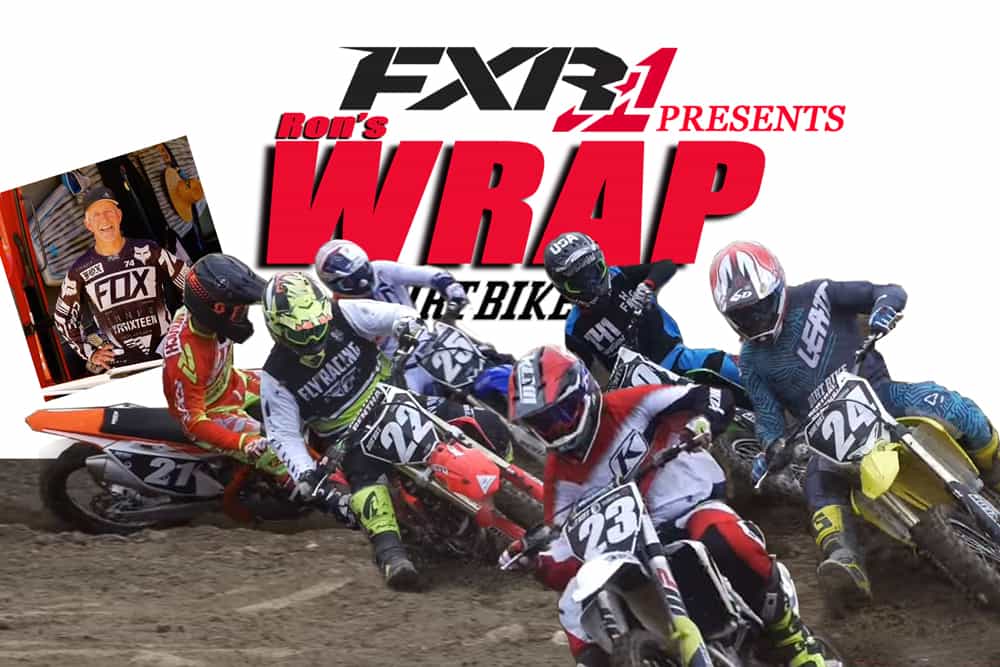 The 2018 250 MX shootout was unlike any other shootout in recent years. It was all about one bike: the new Honda CRF250R. The five other bikes involved are mostly unchanged. The Yamaha and Suzuki have only cosmetic changes while the KTM and Husqvarna have minor updates. Only the Kawasaki has real changes to the motor, but not enough to change its position in the overall standings. Those five will finish in the same order as 2017 because we believe it’s important to be consistent from year to year. We use most of the same test riders and the test will be written by the same staffers. Here’s how we see the bikes.

The 2018 CRF250R is completely different this year. It now has double overhead cams with finger followers and a super-short stroke. The motor is electric-start only; no kickstarter at all. Clearly, there’s a lot of KTM influence here, but not everywhere.  The air fork is gone, replaced with a Showa coil-spring fork. The chassis is completely different from the old CRF250R, but we did get a preview of it on the 2017 Honda 450. The 250 uses the same frame with minor variations around the engine cradle. Like the 450 it uses an intake that goes over the rear shock to give the throttle body a straight shot down into the intake valves. The end result is that the Honda is a screamer. There’s a massive horsepower increase over last year, and it’s all from the mid-range up to a crazy top-end scream. Even with all the changes, the Honda still handles like a Honda, which is to say it’s very nimble and easy to turn. This is despite gaining weight compared to last year, between the electric start and the coil spring fork.

The Kawasaki KX250F has had more success in Pro racing that any other bike in its class, but in more recent years, it hasn’t been as dominant, leading to a total chassis redesign in 2017. Kawasaki followed that up with a long list of motor changes for the 2018 model. It doesn’t have electric start, but the KX is the lightest of the Japanese-made 250 four-strokes. It uses a single-spring Showa SFF Type 2 fork, with the spring in one leg and all the damping functions in the other. The KX has great low end power and a very narrow layout, making it very easy to ride. Another great feature is that it can be tailored to fit almost any rider. The footpegs and handlebar positions are adjustable, and you can switch maps with plug-in couplers or use the Kawasaki FI Calibration kit, which is a hand-held accessory. The Kawasaki’s standard power delivery makes it a good fit for novices, but it needs work to run with bikes like the Husky and KTM. It was fourth in 2017.

KTM is in the driver’s seat because it won last year’s 250 MX shootout. The 250 SX is the lightest in the class, it has electric start and for years it’s been the fastest, too. In the past, the only thing that held it back was suspension, and last year, KTM addressed that with the WP AER 48 air fork. In 2017, it was the uncontested favorite among more experienced riders who don’t mind screaming the motor and taking advantage of all that top-end power. The bike offers a number of ways to alter that powerband through a map switch and traction control, but no matter which setting you use, it’s a pro-level revver. For 2018, KTM took a wait-and-see approach. The bike didn’t get any mechanical changes aside from a beefier battery and some suspension tweaking. It did get a few cosmetic updates including that orange frame.

Suzuki has been shuffled out of the limelight in the 250 class by newer bikes and pro teams with bigger names. But the RMZ250 was the standard of the class for years, especially in the handling department. There were considerable changes for the 2016 model year, but the bike didn’t really look or perform any different. Now, the 2018 model is completely unchanged aside from graphics. The bike still uses a KYB PSF2 air fork with separate clickers for high and low-speed compression damping. Like the KX, it has couplers that allow you to adjust the power delivery. The Suzuki’s fundamental personality hasn’t changed for years; it’s still an extremely good handling bike with a smooth, torquey motor. The RMZ250 is the uncontested the king of the turns. It lays into corners effortlessly and doesn’t demand any special technique. On the  negative side, the Suzuki is still heavy despite having an air fork and no electric starter. It’s also has the most modest peak power output. The bike still has a place in the market and it can certainly be made competitive, but the RM-Z 250 hasn’t quite kept up with the rest of the class. It was sixth in our 2017 shootout.

The YZ250F has a huge following of devoted riders who absolutely love it. It’s the number one choice for novices and beginners, and there are even a few pros who prefer it over any other 250. When it got the reverse-head, downdraft intake treatment in 2014, it became the new horsepower standard of the 250 class, particularly down low. And was still reasonably light, despite the coming of fuel-injection. Yamaha stubbornly stuck with the KYB coil spring fork throughout the era of air forks, which further cemented its status as the most-loved bike in the class. Since its introduction, Yamaha has been refining the bike from year to year, without changing the fundamental formula. Now it returns with almost no changes for the new model year to face a class that has, for the most part, completely changed over the last three years. It still has suspension that’s as good or better than that of any other production motocross bike on earth. It still has great low-end power and excellent handling. And it might still be the favorite for everyone short of a full-time Pro racer. It was third in our 2017 shootout. 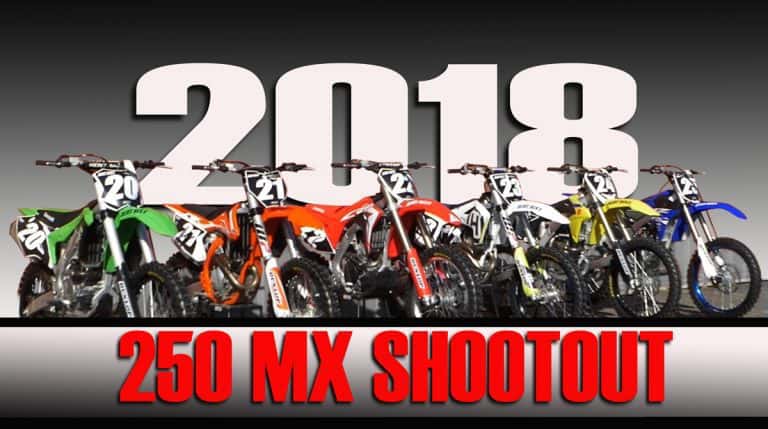 So does the Honda have what it takes to upset last year’s winner? It certainly gained horsepower over the previous year, but it also gained weight. It’s around 10 pounds heavier than the KTM and Husky. In order to win the shootout, it would have be have some big advantage elsewhere. That isn’t the case. Despite the motor redesign, the Honda still isn’t as powerful as the two Austrian bikes. Most riders do believe that the Honda’s suspension is excellent, but that still doesn’t give it the momentum to overcome the KTM’s advantage in power and weight. The full test of the Honda will appear in the January, 2018 print issue of Dirt Bike. The shootout won’t appear until February, but for a summery of how it goes, check out the video version by clicking the image above.

Tom White passed away yesterday. He was a dear friend and I’ll miss him very much. I’ve know him for 40 years, and there was hardly a week in that time that we didn’t speak. Back in the White Brothers days he gave me free run of the company’s shop, which was instrumental for my job at Dirt Bike. We used the dyno for all our test bikes, and he even allowed me to build a photo studio in the warehouse. 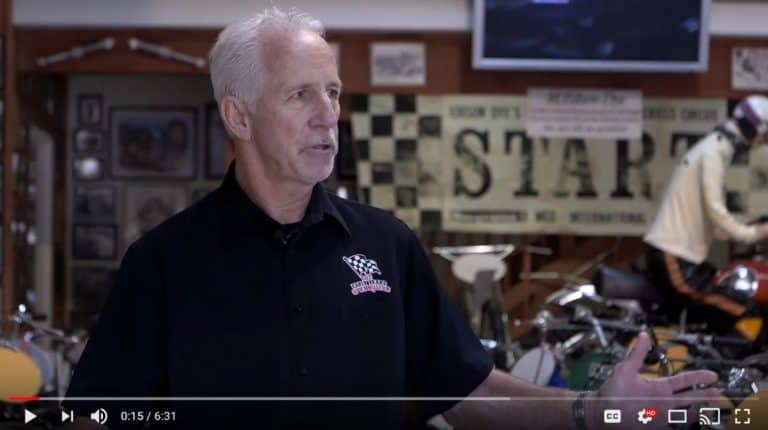 A few months ago we started on a video series featuring various motorcycles in his museum. At the time, Tom was sick, but he loved the idea so he sucked it up and Travis Fant filmed the first four segments in one day. Unfortunately, there would be no more segments. The first two have been already released on DB’s Youtube channel. The final two will be showing up soon.  You can click on the image above to see the Honda CR125 episode. The one below is for the Hallman TT500. He was a gifted speaker and ran through each of these in one take, pulling information off the top of his head. 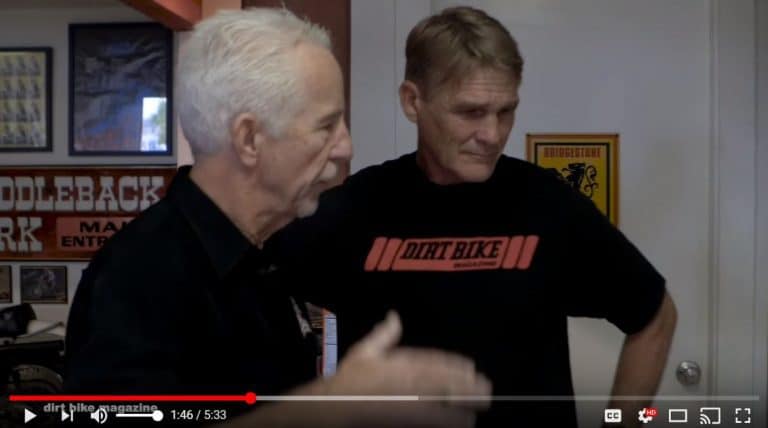 Tom was a truly good man. Throughout his illness, he made it a point to be upbeat no matter how badly he felt. I consider myself very lucky to be his friend. 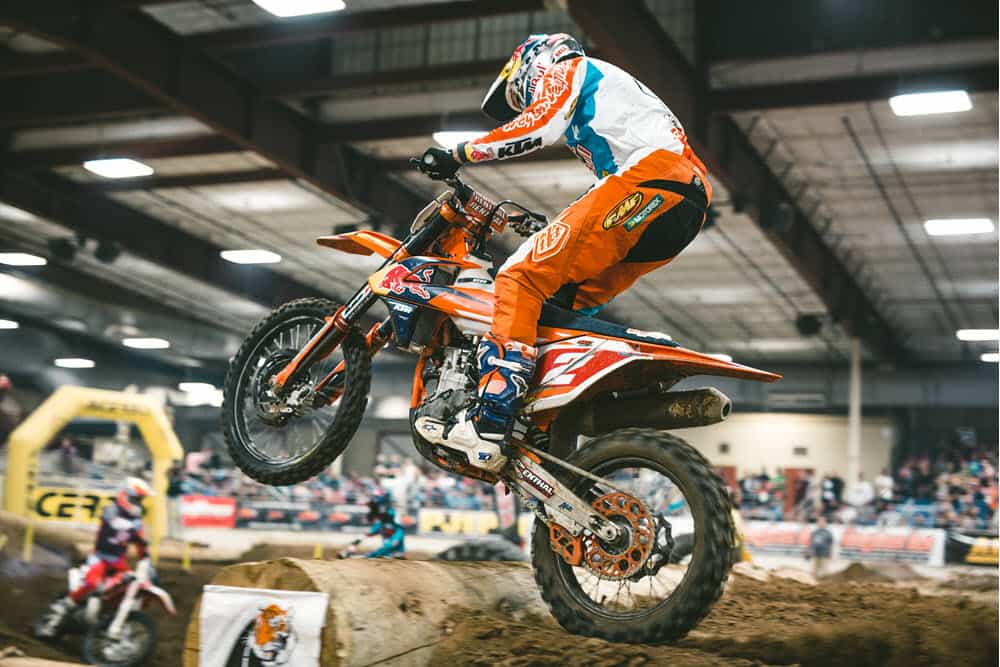 Cody Webb appears to be on his way to his third EnduroCross championship but the rest of the field is eager to challenge him for the Boise win. Photo: Tanner Yeager

The Ford Idaho Center, which is in Nampa, just a little west of downtown Boise, will host round six of the 2017 EnduroCross series this Saturday, November 4th. Fastway by Pro Moto Billet presents EnduroCross by Rekluse Clutch, which are both local companies that provide the performance products that many of the EnduroCross racers use. Pitting the best off-road motorcycle racers against each other on a track filled with rocks, logs, tractor tires and a pond creates some of the most exciting racing action you will find anywhere. There is no better way to spend a Saturday night with your friends and family.

Cody Webb, the FMF KTM Factory rider and two-time EnduroCross champion, will come into the Boise event as the heavy favorite but anything can happen in EnduroCross. Colton Haaker, the defending EnduroCross champion, has unfortunately suffered some injuries and is not expected to participate but there is a long list of riders eager to challenge Webb. 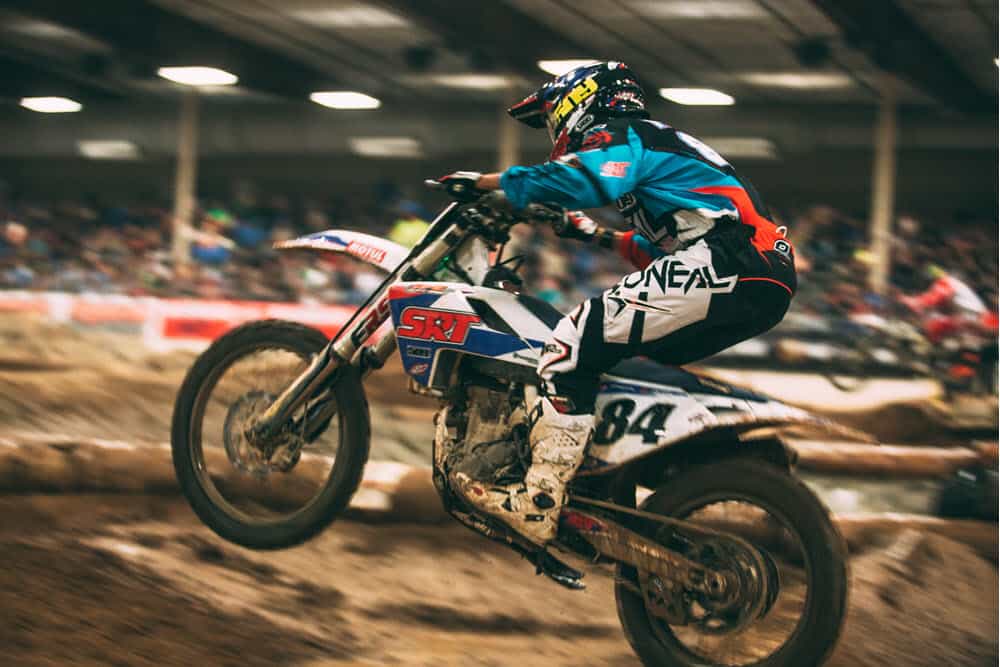 Trystan Hart is becoming one of the stars of EnduroCross and challenging for wins. Photo: Tanner Yeager

Twenty-year-old Trystan Hart has stepped up this season and earned three podiums in five events. The Canadian challenged Webb at the most recent round in Scottsdale and wants to earn his first win. Kyle Redmond has earned several podiums over the years and he, too, is looking for a win. Ty Tremaine, the three-time Junior EnduroCross champion, who is still only twenty-one years old, finished third in the championship in 2017 and looks poised to challenge as well. GasGas backed Noah Kepple, another twenty-one-year-old, also shows amazing skills that could earn him a top spot. And Cooper Abbott, son of off-road motorcycle racing legend Destry Abbott, is quickly becoming one of the stars of EnduroCross. There will be plenty of action in the pro class and there are also classes for Amateur, Vet, Women and TrialsCross riders. 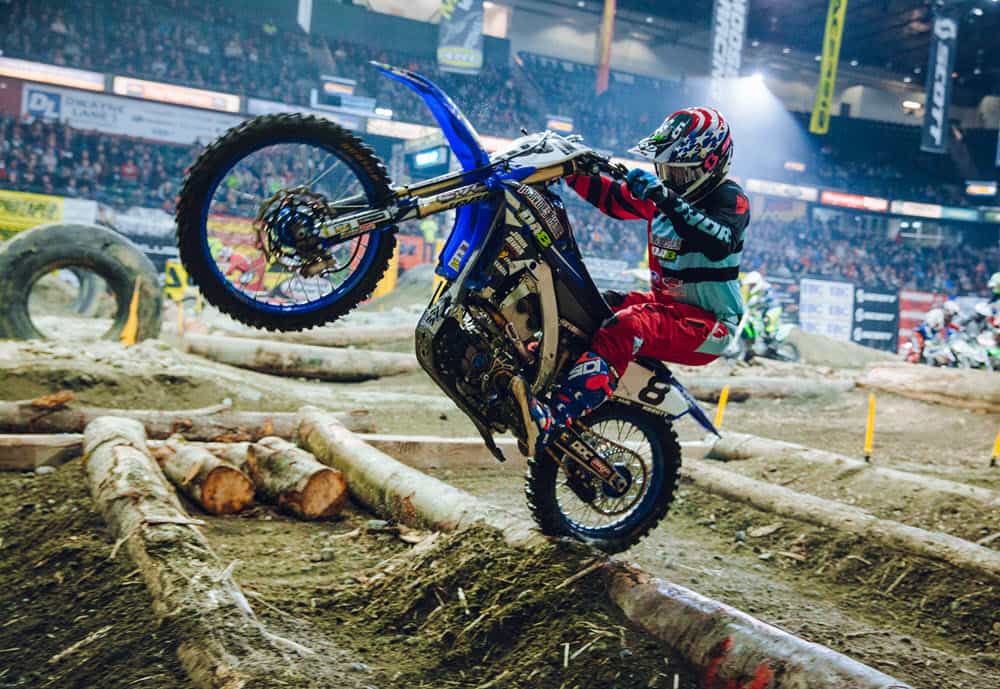 EnduroCross includes all of the toughest off-road riding obstacles in a single lap. Destry Abbott will be holding one of his DA8 Training sessions at the Boise EnduroCross to help riders master the techniques necessary to ride through the tough terrain. Photo: Tanner Yeager

The Boise EnduroCross will also include one of the Friday night Destry Abbott, DA8 training sessions on the track. The two-hour EnduroCross training session is very hands on with several of the top pro riders assisting Destry in providing instruction on how to tackle the obstacles. The session is open to all riders (even those not competing at the Boise event). For the $100 entry fee, you will learn how to tackle the difficult obstacles found on tough trails and EnduroCross tracks. This will be limited to the first 20 entries so sign up quickly to hold your spot.

EnduroCross includes a class for everyone with the Amateur, Vet, TrialsCross, Women’s and Super EnduroCross (Pro) classes. And for 2017, there is an Amateur B Main, which allows more riders to make it into the night show. If you want to give it a shot yourself, now is the time to sign up.

Riders can enter to race and/or the Destry Abbott training session here: https://secure.tracksideprereg.com/endurocross/ 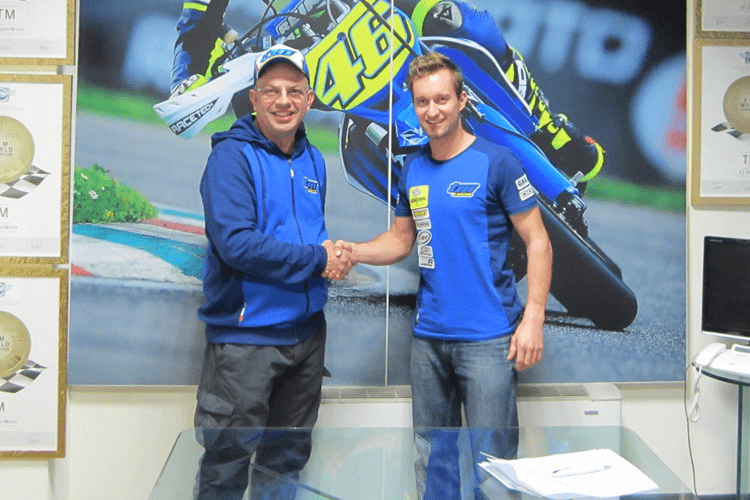 This was certainly out of the blue. Max Nagl just signed with the tiny Italian company TM to ride the 2018 MXGP season. TM continues to amaze us.

TOM WHITE PASSES AWAY AT AGE 68