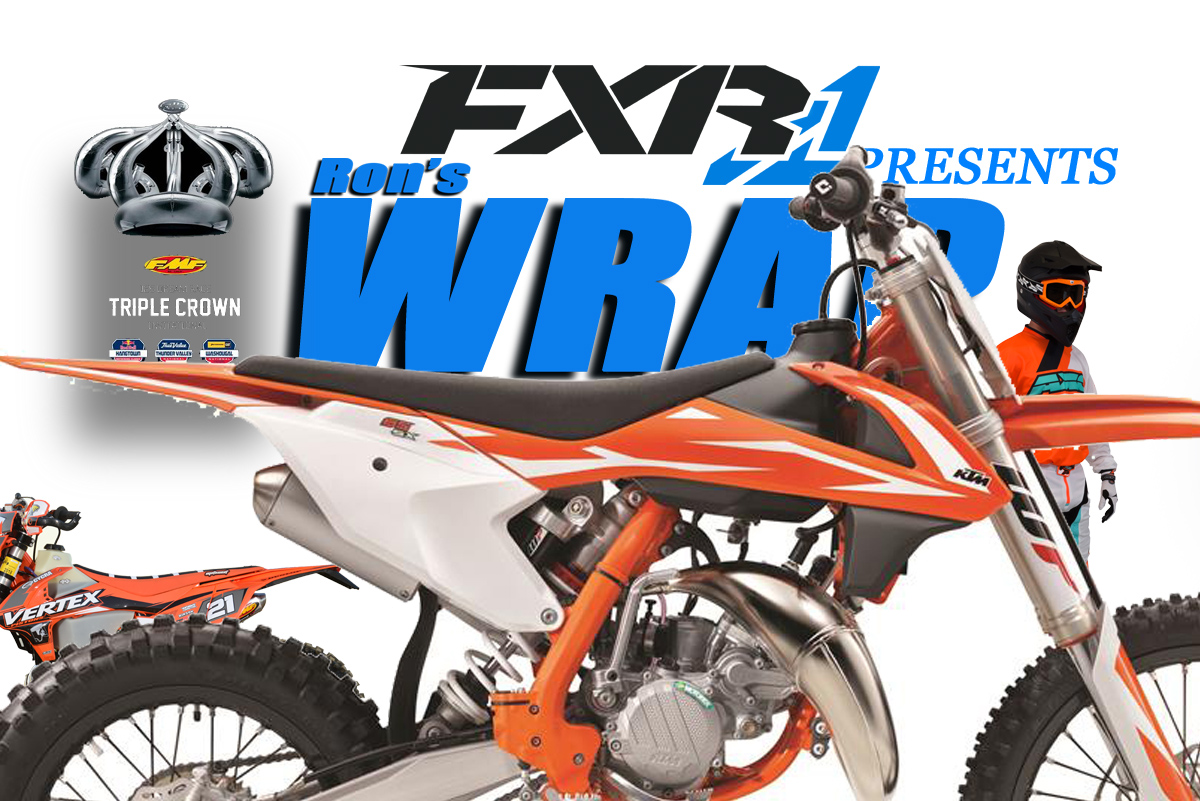 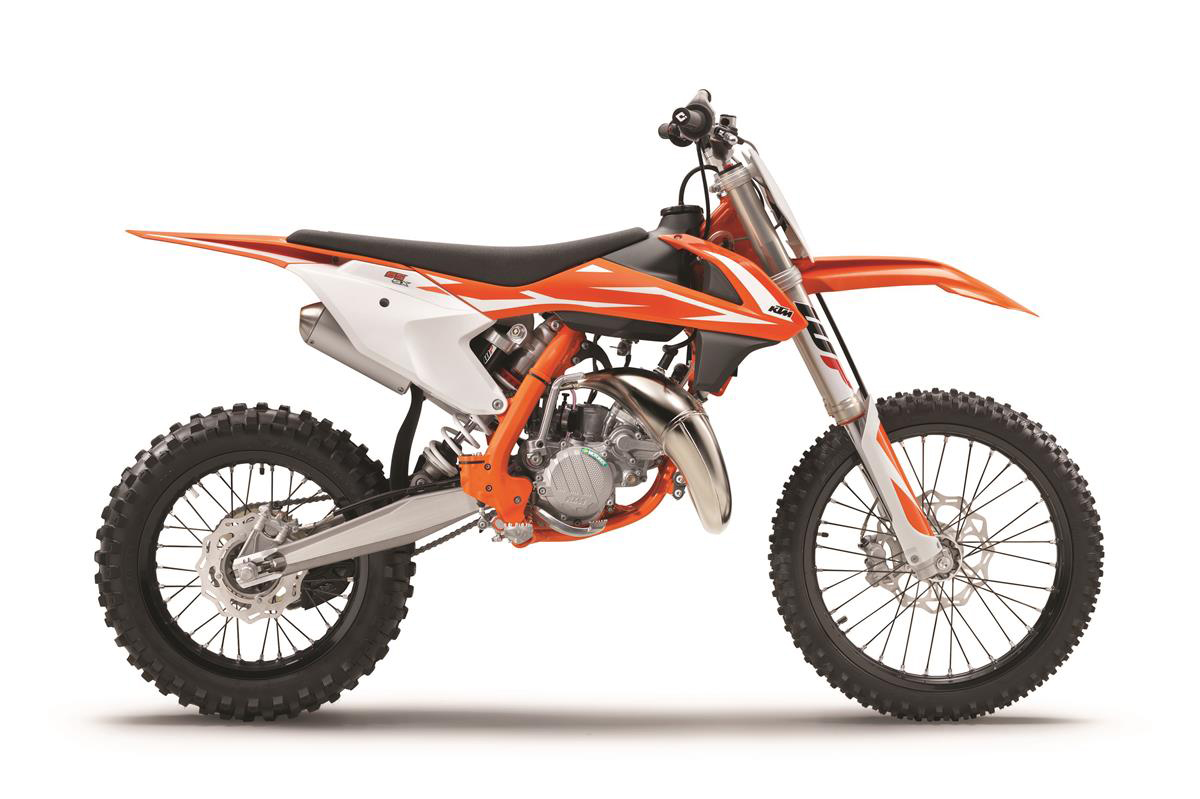 The new model release for 2018 KTMs is an on-going mini-series. It’s kind of like a drip feed irrigation system to keep interest from wilting up. We expect the next major announcement to be in two weeks, and that will include details on the fuel-injected 250 two-stroke that was teased with a line drawing last month. Earlier this week we saw photos of three models: the 450SXF, the 250SXF and the 85 SX. Of those, the most interesting is the 85. Even if you’re not in the market for a mini, this bike is fascinating . 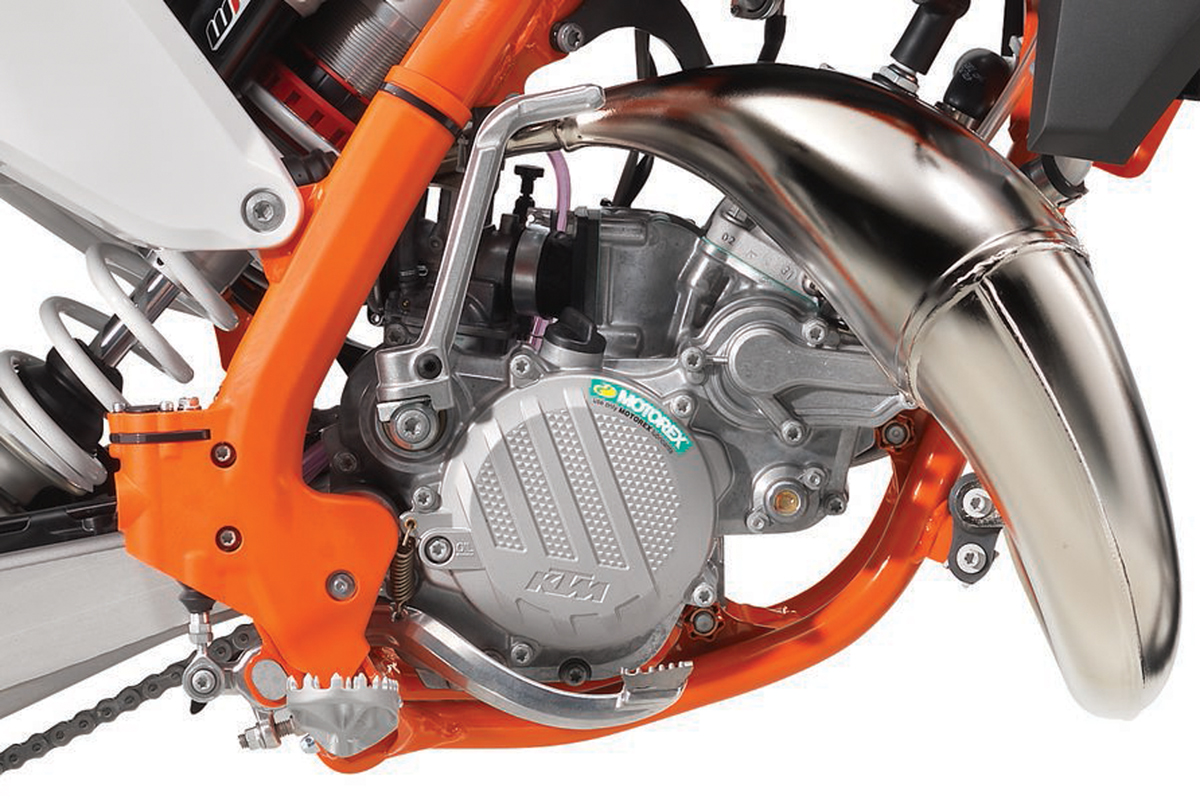 Detailed information is on a if-they-told-us, they’d-have-to-kill-us basis right now. But you learn much from photos already released. With the new 85, all KTM’s two-strokes motors have undergone complete redesigns in the course of three years. One of the reasons for this is that fuel-injection is on the table for everyone, and the new motors are designed with that in mind. Even though the new 85 has a carburetor right now, we guarantee that there’s an EFI version somewhere in KTM’s R&D department. The new motor also leaves space for an electric starter if one is ever required by the market.

It’s interesting to look at the previous motor, side by side with the new one.  Nothing is the same, although technically they both have case reeds and power valves. The power valve on the new one is now externally adjustable, just like the bigger two-strokes. The new 85 will get an air fork and a new shock, although it’s interesting that KTM is sticking with no-linkage PDS in the rear.

We would show you details of how the 2018 250SXF and 450SXF differ from the previous versions, but there’s nothing to show, aside from the new orange frame. There will certainly be suspension changes, but those models are mostly unchanged for the next year. We haven’t seen the 350 yet, but don’t read too much into that. So much of the 250SXF and 350SXF are shared that both would get similar updates. KTM is concentrating on two-strokes right now in a big way. The 125 and 150 will not be dramatically different, but there might be more changes coming for the 250. Will it get Transfer Port Injection like the off-road models? Almost certainly, but we don’t think it will be this year. 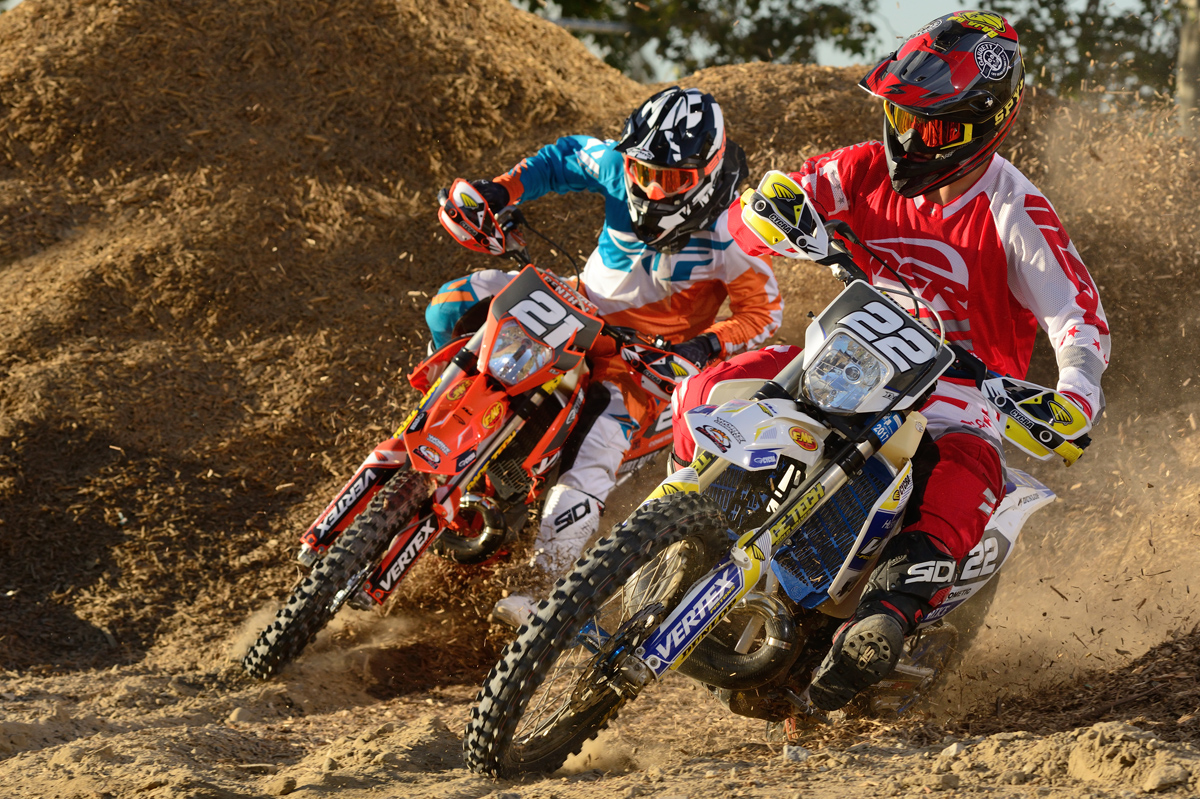 This week we were out working hard (read: having fun) with two 300cc two-stroke project bikes built by Jay Clark. Jay is a one-man project-bike factory, who puts together very cool bikes in order to promote his clients. Vertex, Pivot Works, FMF and Dunlop are among the companies that he represents, and he does a good job for them. These bikes are different from his usual builds for one very good reason: they’re his. Jay built them for his kid and himself, using everything he’s learned from other people’s bikes. 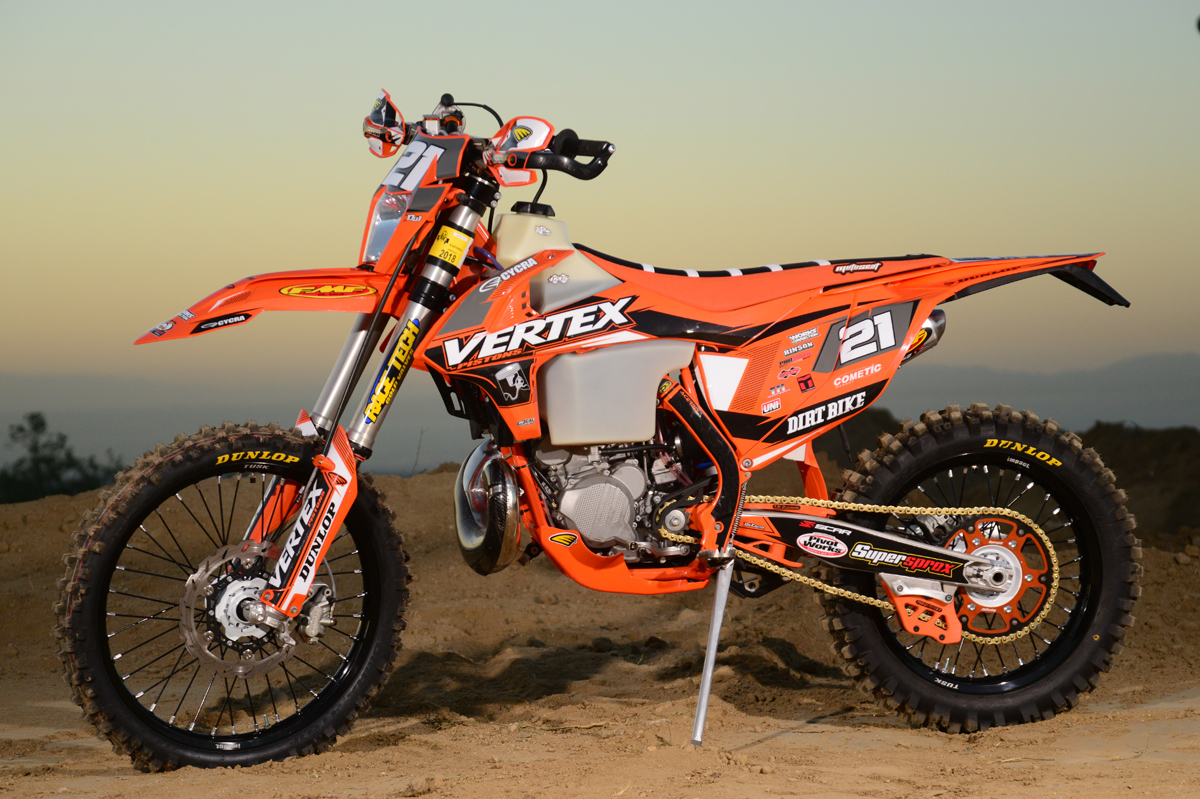 The idea was to make similar bikes based on the KTM 300XC and the Husqvarna Tx300. These bikes start off as the more aggressive, race-oriented bikes in the two lines, but in this case, trail riding was the ultimate goal. Race Tech softened the suspension with that in mind. Jay wanted to increase low end power so he increased compression slightly (not enough to require race gas) and got good results with the standard Vertex piston. 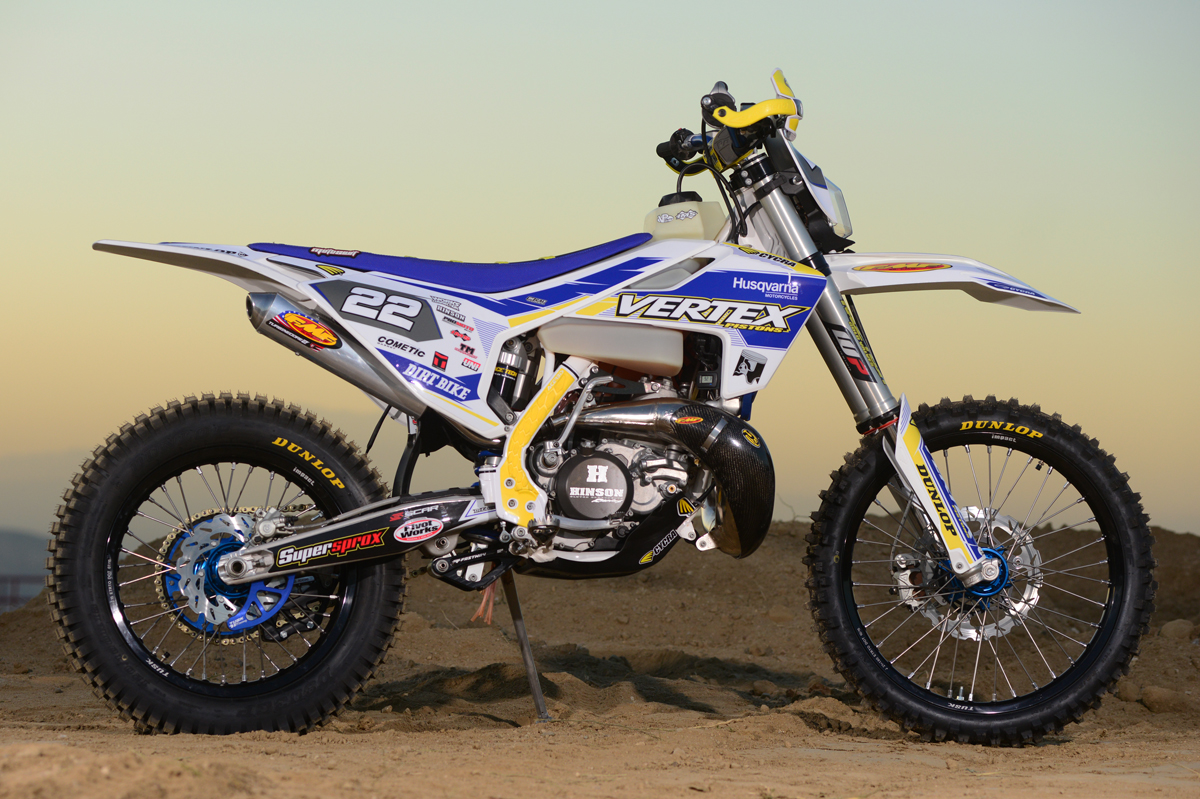 He added headlights to both bikes–if he had started with the XC-W and the Husky TE, they would have already had this, but he wanted the linkage suspension on the KTM. The biggest change up for the two was rear tire choice. The Husky got a D803GP trials tire and the KTM has a gummy endurocross tire based on the old D756 mold. 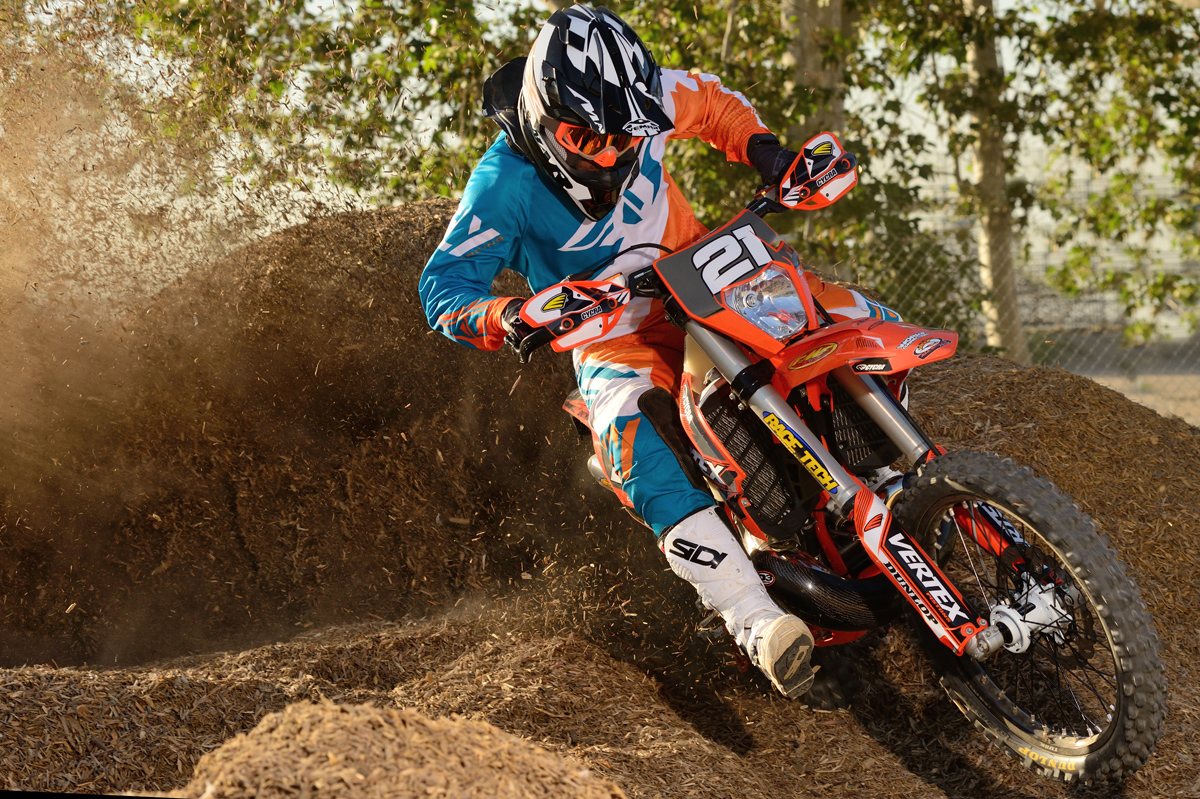 Even though the bikes were set up so similar, they had distinctly different personalities. This seems to be an on-going these with KTMs and Huskys. The Huskys usually have a smoother hit. For trail riding, we usually like this better. 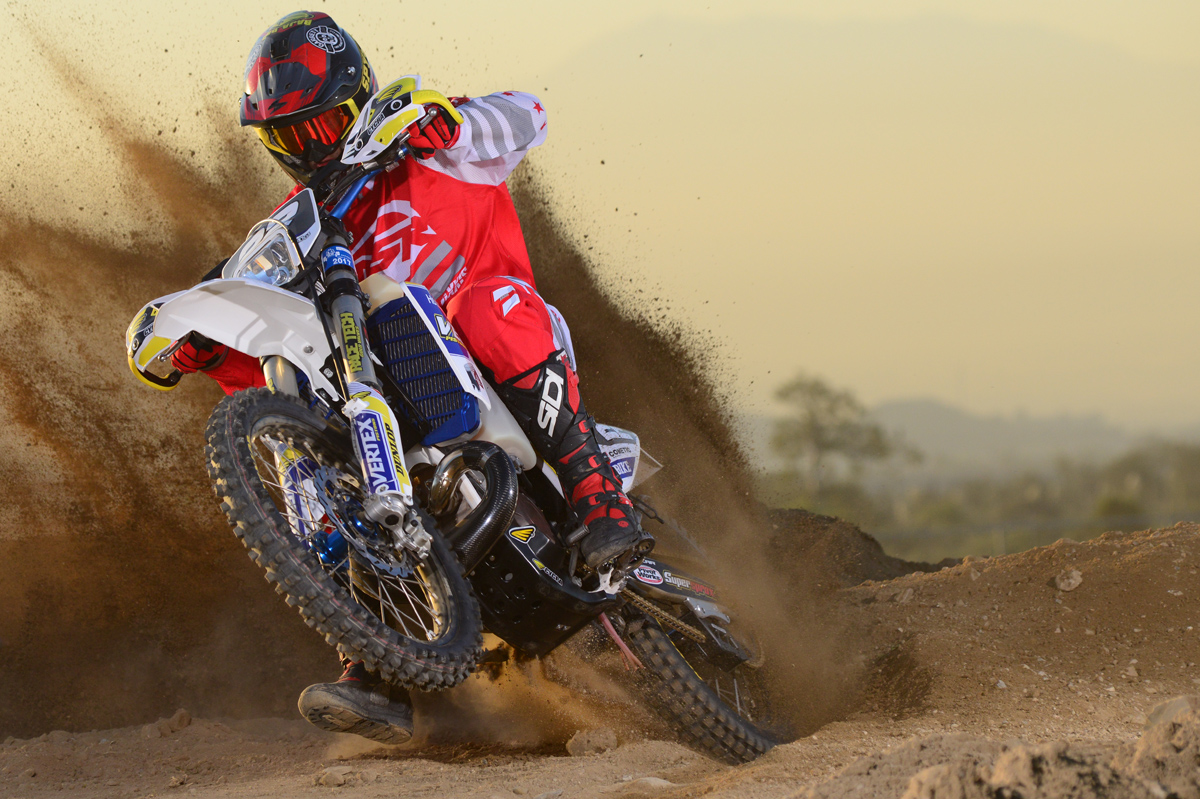 We didn’t get to ride the bikes as much as usual–Jay has a personal stake in these two bikes and they were built with a lot of love. We did scratch them up a little. That doesn’t make us bad people. Look for the full story in Dirt Bike this summer. 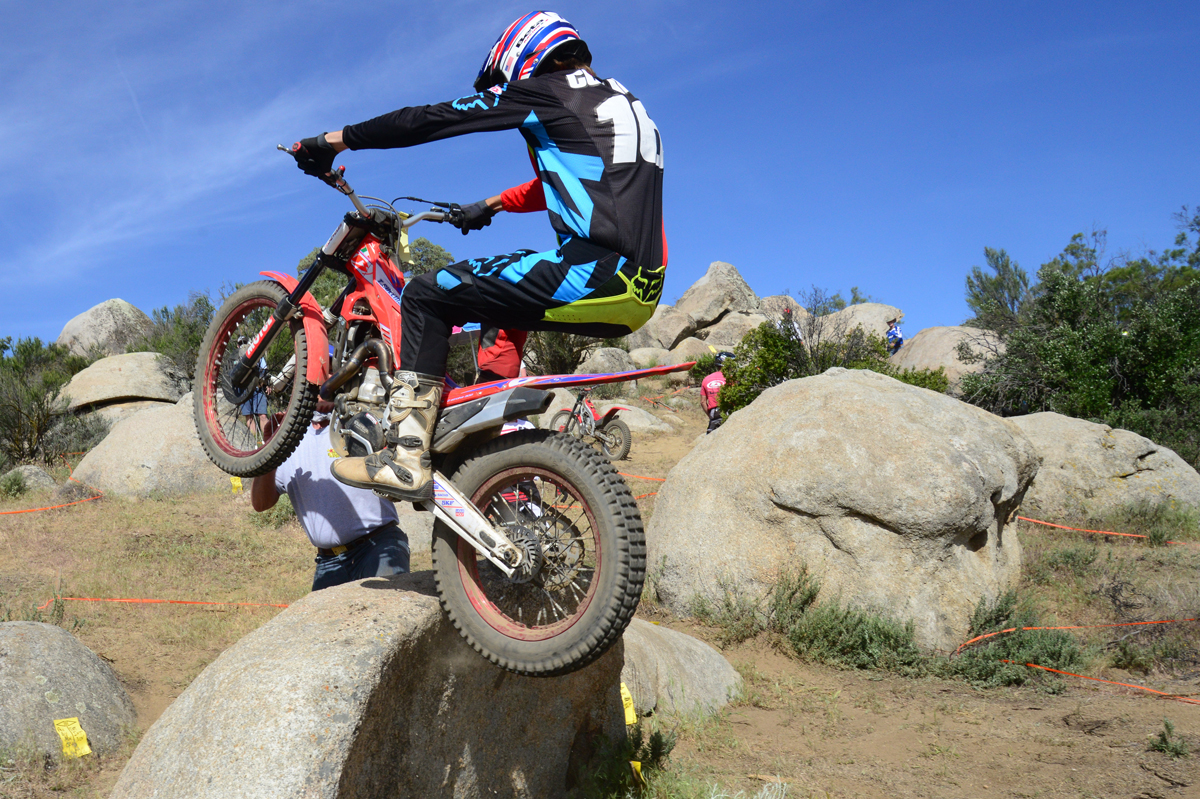 Last weekend we went out to the El Trial de Espana at Motoventures compound in the hills above Hemet, California. This event isn’t widely known today, but it has incredible history. It’s been held for 47 years, and back in the late ’70s and early ’80s, it was always linked to Bernie Schriber, America’s only trials World Champion. Bernie won the event eight times. In the post-Bernie Era, the El Trial has been used as a fund-raiser for the Trials des Nations team. This year, it was well attended, although both Tom Webb and I couldn’t ride. I was injured and he is still recovering from knee replacement. We both attended and had a blast watching and got to see what real talent looks like. Next year! https://www.socaltrials.com 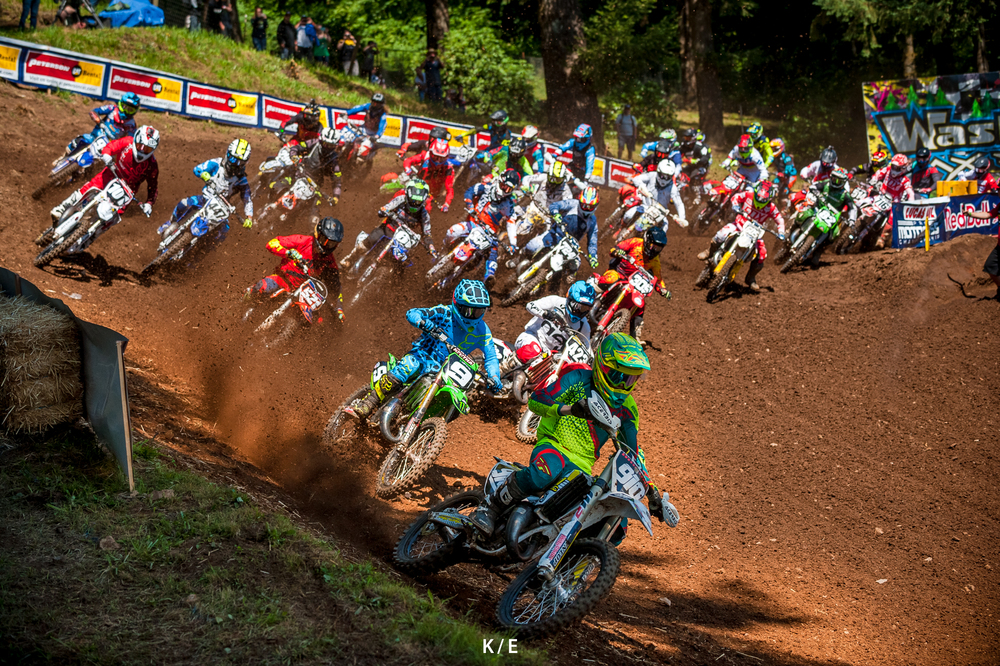 Hangtown, Thunder Valley and Washougal will all be stops for the FMF 125 Dream Race invitational Triple Crown in 2017.

40 riders
125cc-150cc legal
One practice/One moto format on National Day
Riders must be 16+ and an “A” rider
This is an invitational event. Past champions, current pro racers, local A riders, factory supported B riders, and industry icons will all line the gate, competing for a spot on the podium and the chance to bring home one of nine custom FMF trophies.

Even though this is an invitational event, we want to ensure full gates at each race. To put yourself on an alternate list, or for more information, email us at [email protected]

KTM will offer contingency to any KTM rider that finishes inside the top three at each of the three rounds of the series. The payout breakdown is as follows: 1st place: $400, 2nd place: $200, 3rd place: $100. Additionally, if a KTM rider wins the overall championship, an additional $500 contingency payment will be awarded.

Racers interested in the KTM_Cash Contingency Program should visit www.ktmcash.com for details and to register for future earnings.

The X-Factor GNCC in Indiana was postponed to May 20 because the area got over four inches of rain. This is a brand-new venue on a deer farm, and it looks incredible. We have a particular interest in this event because test rider Justin Jones made the trip across the country just to compete there. For him and all the other riders who preregistered s well as those who want to attend, here’s the link to information about the event. https://gnccracing.com/2017/05/04/quick-fill-16-this-week-in-gncc 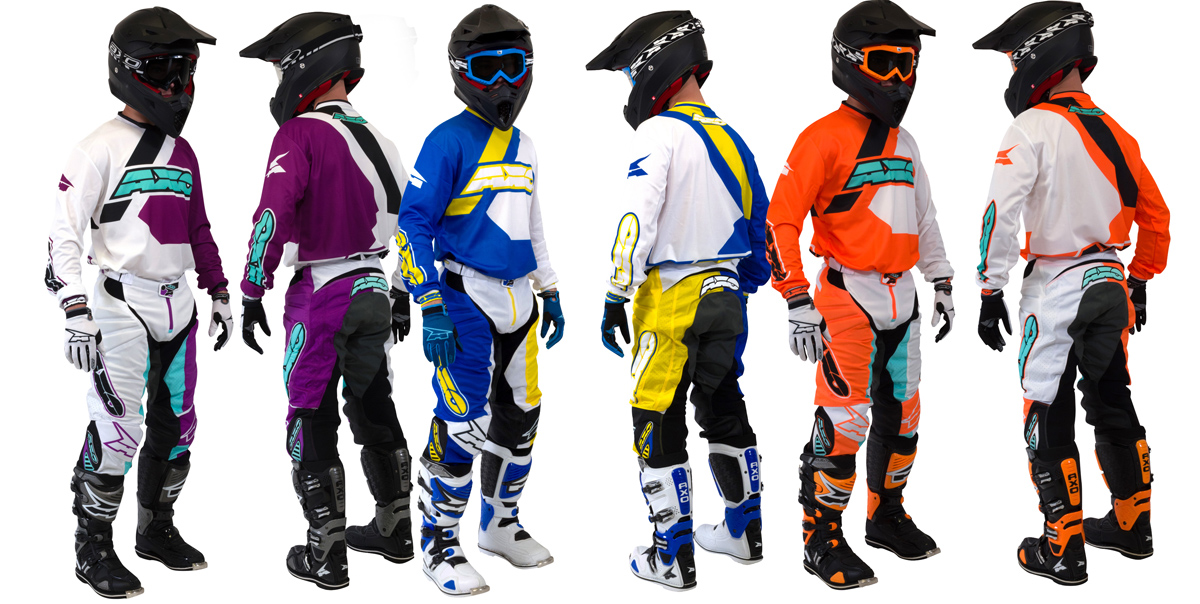 Our buddies at AXO just showed us their spring release, and it looks pretty good. Here’s the low-down:

The AXO Trans-Am pants are designed with stretch panels and an exclusive 3D knee construction for freedom of movement and extension. They are constructed from high tenacity fabrics and have hip padded areas that are included in the pattern of the pants. The Trans-Am pants also incorporates a heat resistant leather panel in the inner knee, front and thigh panels in soft 4WAY stretch material and mesh areas to offer superior levels of comfort and performance. The jersey is made of an extremely lightweight and breathable polyester fabric sublimated with color blocking graphics.

The MXGP official Suzuki riders under the lead of Stefan Everts will be wearing this new gear in the upcoming rounds of the MXGP. It was also worn by members of the newly formed AXO Alliance Amateur Team at the 2017 JS7 Freestone Spring Championship.

There are four color combinations that will be available: