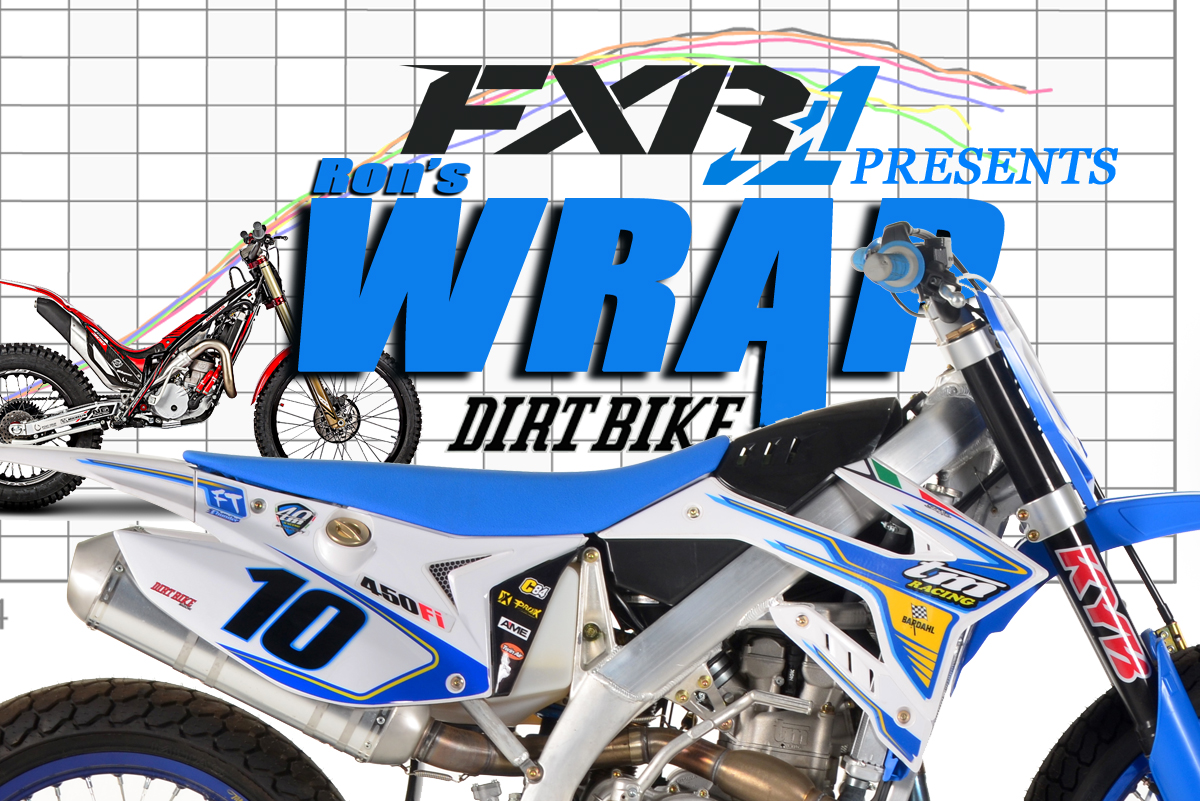 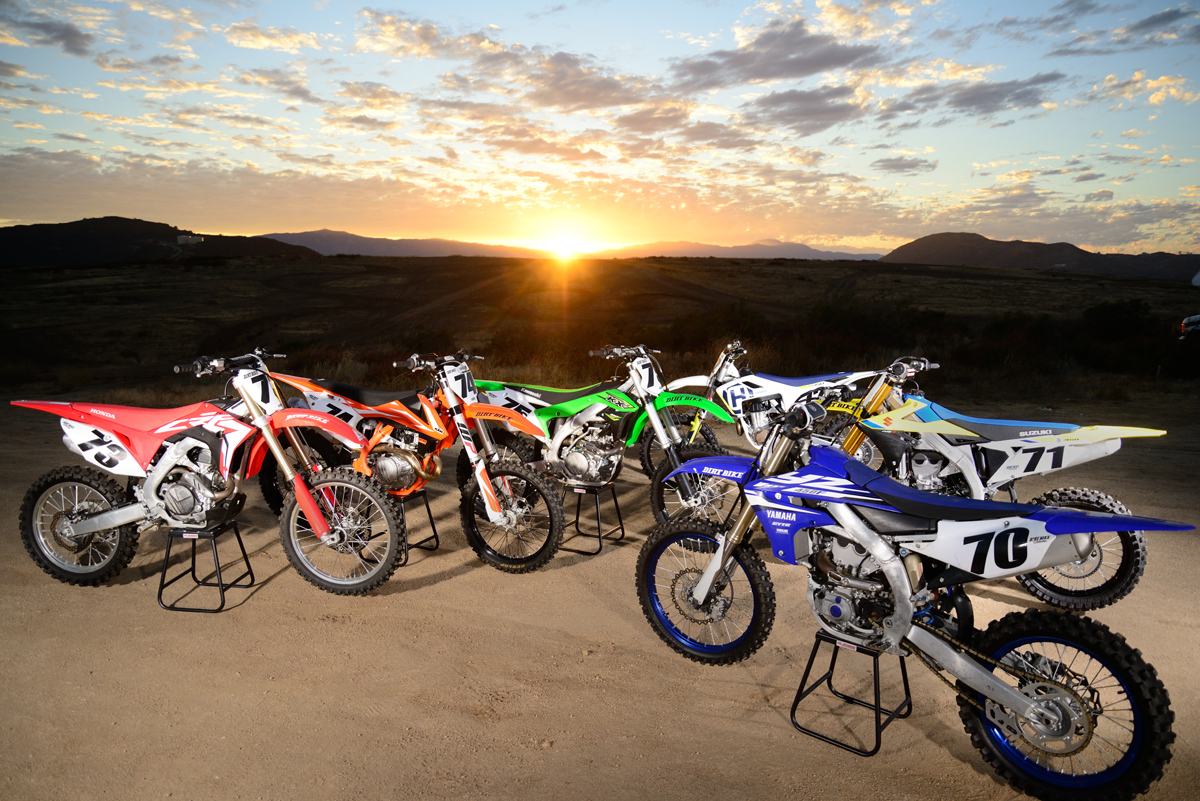 This week the 450 MX shootout really came into focus. Even though we have tested each of these bikes individually, there’s no substitute for back to back testing on the same track, on the same day. With six bikes, that makes for some long days and tired riders. So far we’ve had the bikes at Glen Helen, Milestone and Cahuilla as a group, and several other tracks separately. 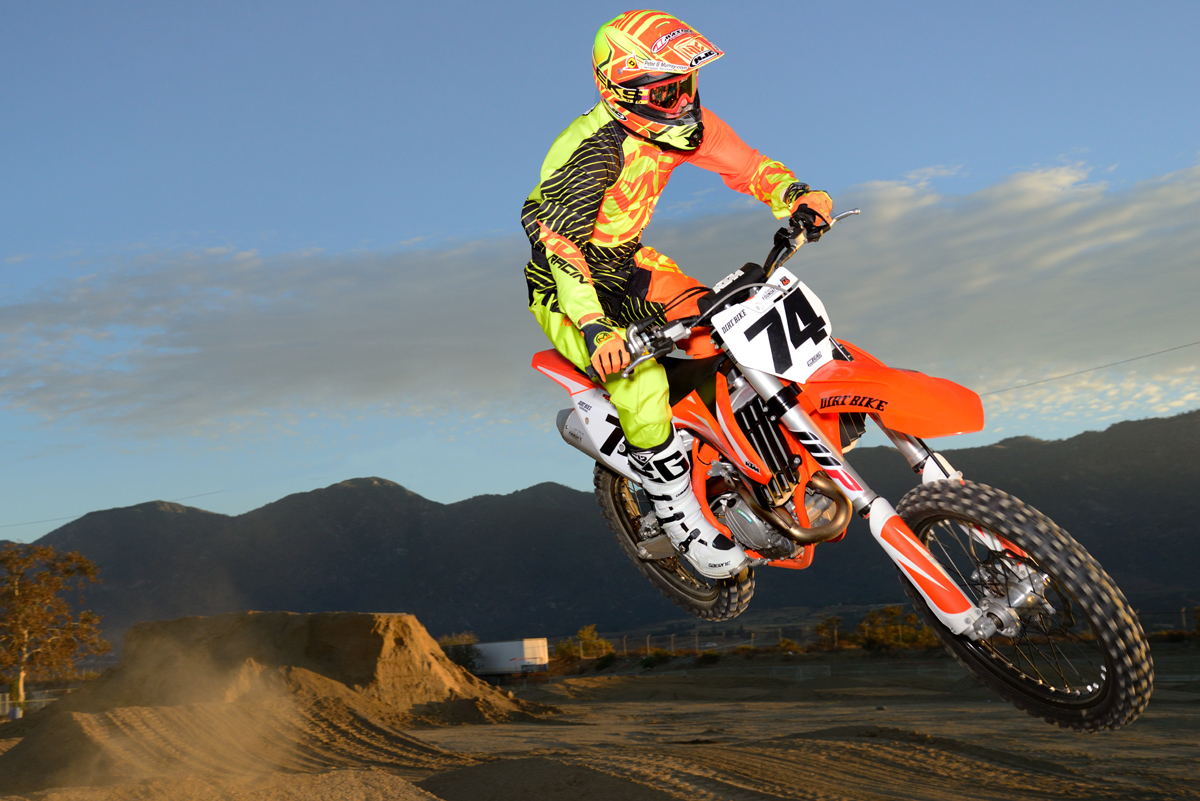 Here are some of the facts about each bike. First of all there’s the weight. On the same scale, with the fuel tanks all drained, here’s how they stack up: 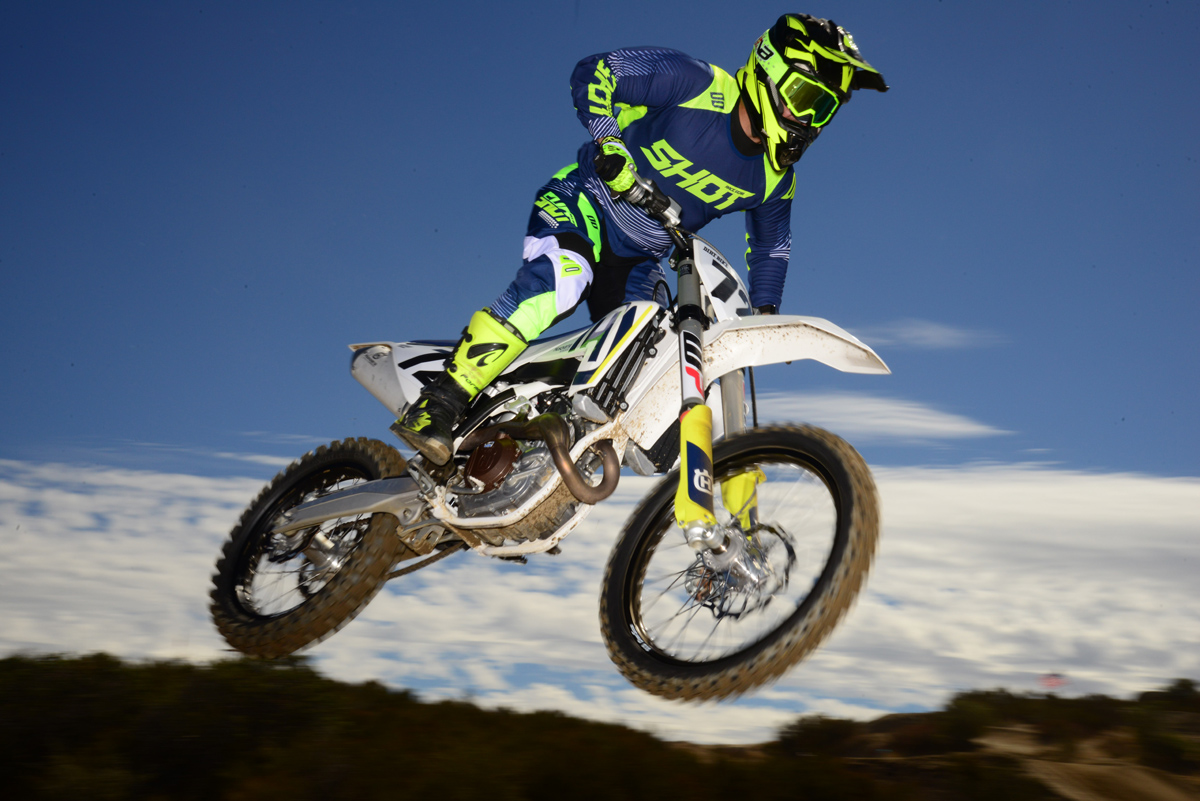 It’s interesting that all of them gained weight this year. The Honda and Yamaha got electric start, the Suzuki didn’t get a button , but it did get a coil-spring fork, the KTM and Husky gained a pound in the new battery and tray, and the Kawasaki was a pound heavier than last year, probably becuase of manufacturing variation. 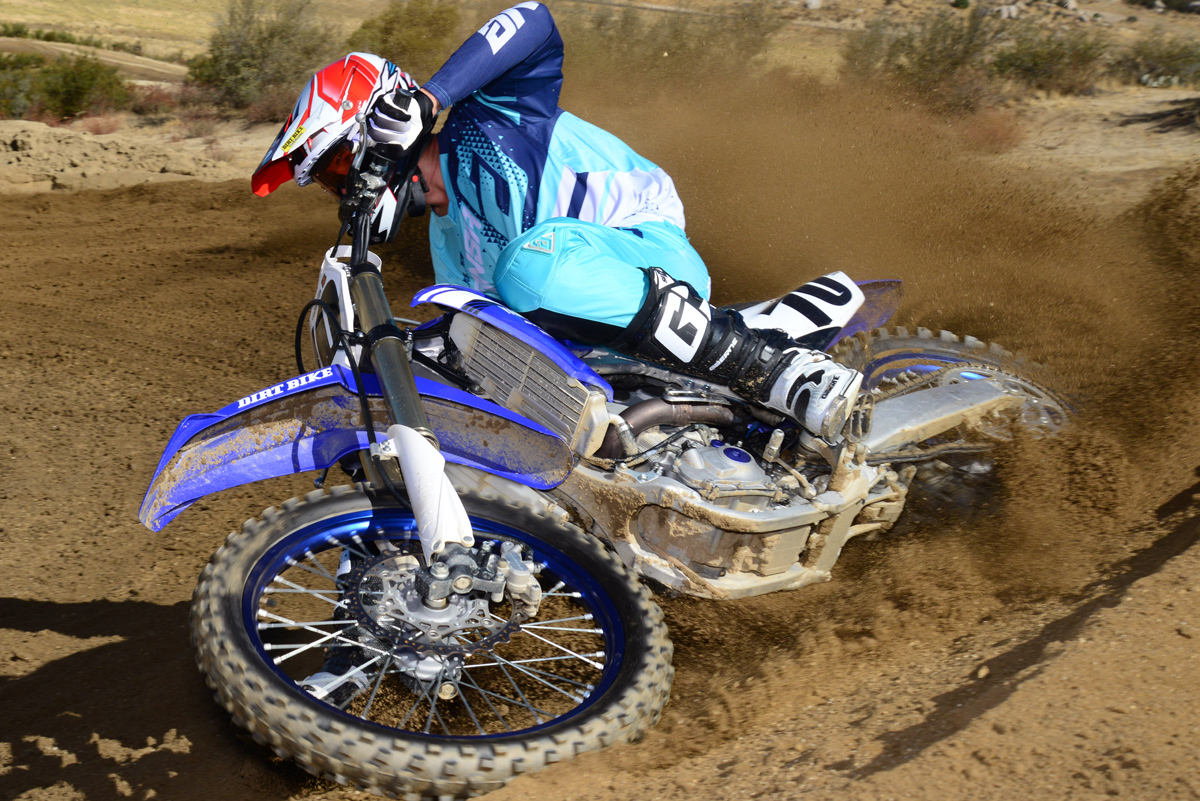 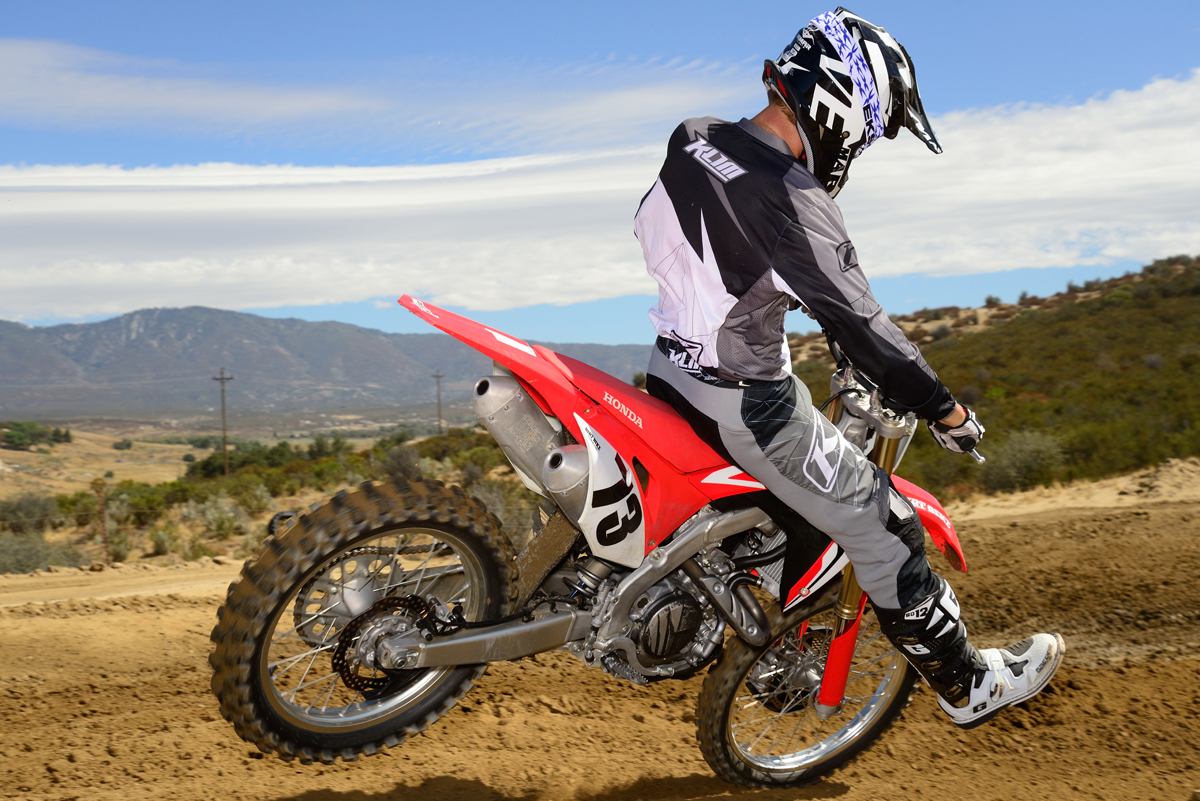 Peak horsepower numbers, as measured on the same day at FMF, stack up like this: 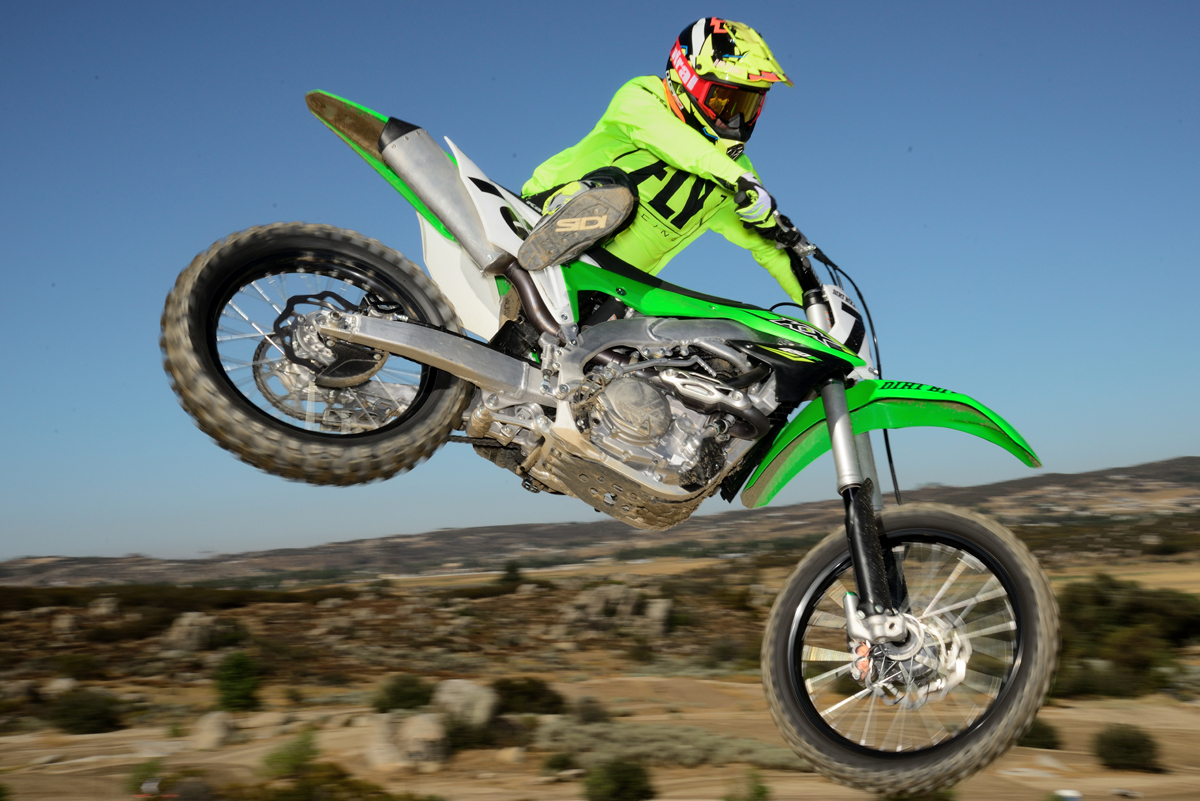 Horsepower peak numbers are, of course, increasingly irrelevant, but fun to look at. The new Yamaha, for example, has less peak power than last year’s model, but it carries that peak number forever. You can see that in the dyno chart below. So far, several impressions are becoming clear. The Yamaha and Suzuki are new bikes for 2018, but they have the same defining characteristics as before. The Suzuki is very good in turns and the Yamaha has outrageously good suspension. Both are heavy, and you feel it. So is the Honda.

The Kawasaki feels light, agile and has no detractors as far as performance goes, but it has that crazy three-chamber air fork, no electric start and some detailing issues. That leaves the KTM and Husky as fairly solid performers, but also the most expensive. We’ll sort it all out for the December print issue of Dirt Bike. 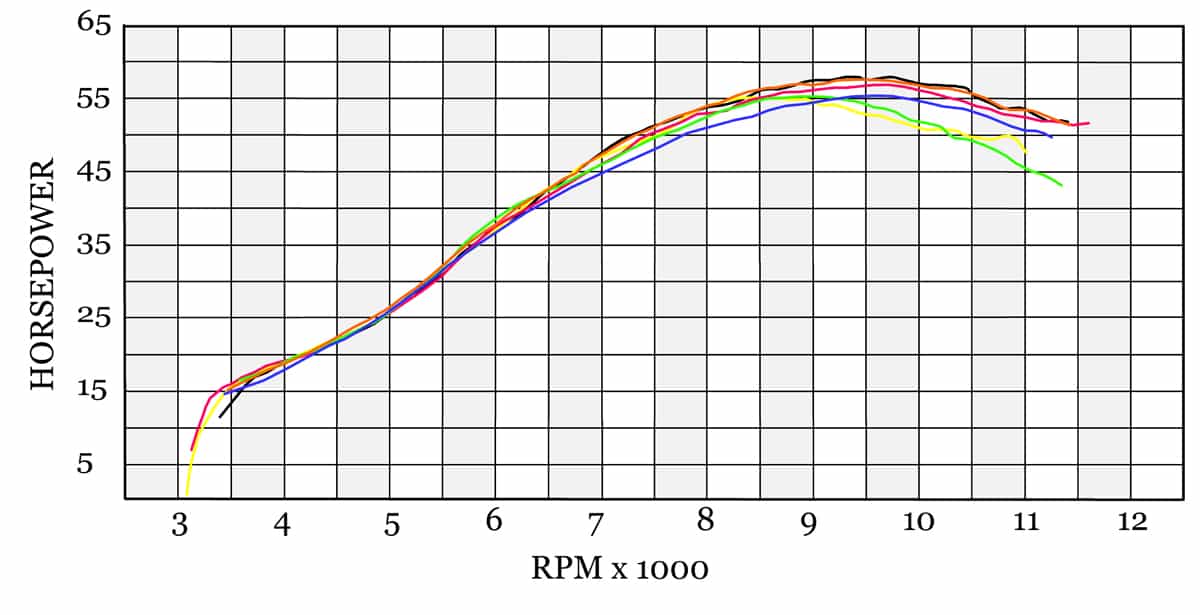 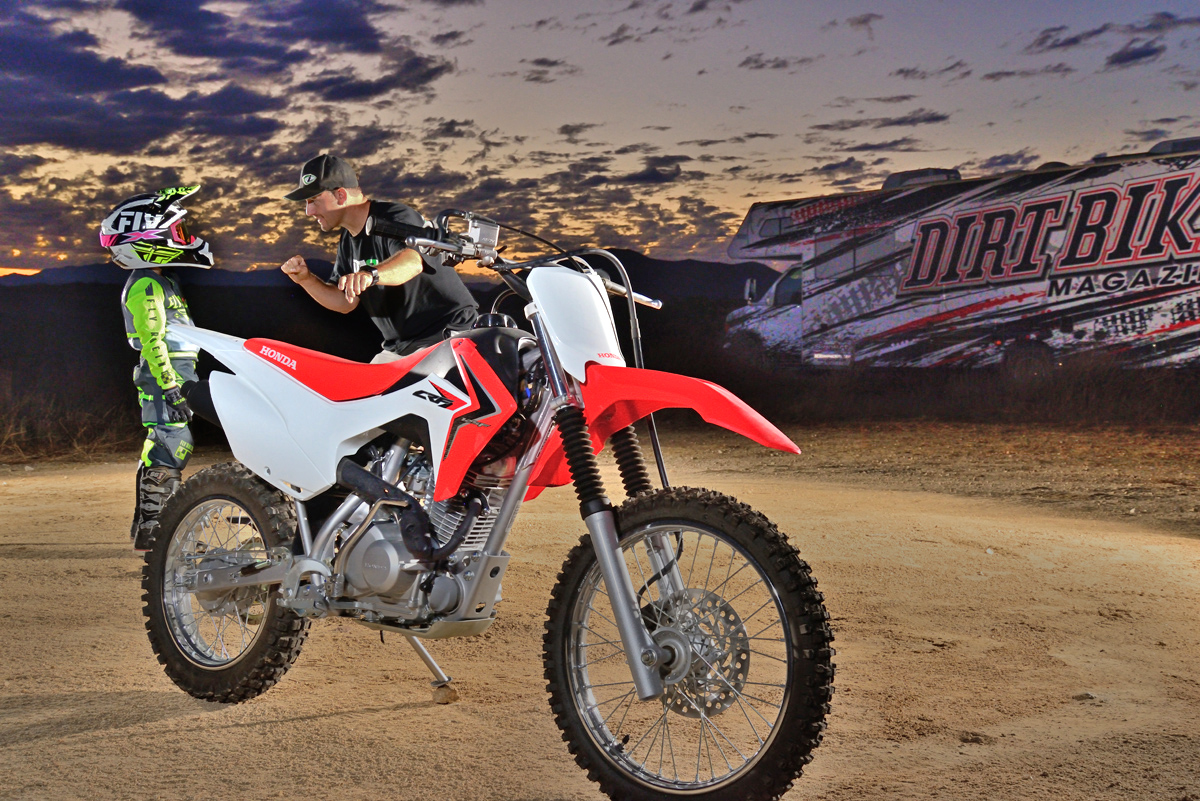 We’ve had a long-term CRF125F for about six months and it’s performed duty at both my house and the Tilley ranch. The CRF125R is an electric-start and manual clutch five-speed that comes in two wheels sizes. The standard one is a 14/16 combo and the big wheel is a 16/19. A little over a year ago, my wife and my (then) 12 year-old kid took a class at the Honda Training Facility in Colton, California where they both rode the CRF125F. They loved it, particularly the small-wheel version. The low seat height gave them more confidence, and the similar models offered from Yamaha and Suzuki and Kawasaki all are offered as big wheels only. The bike has been great, but its only real issue is that it only fits a kid for about a year. The perfect set up would be to have an extra set of wheels. In the real world, it’s more practical to trade up when your kid outgrows it.

THE WORLD IS FLAT 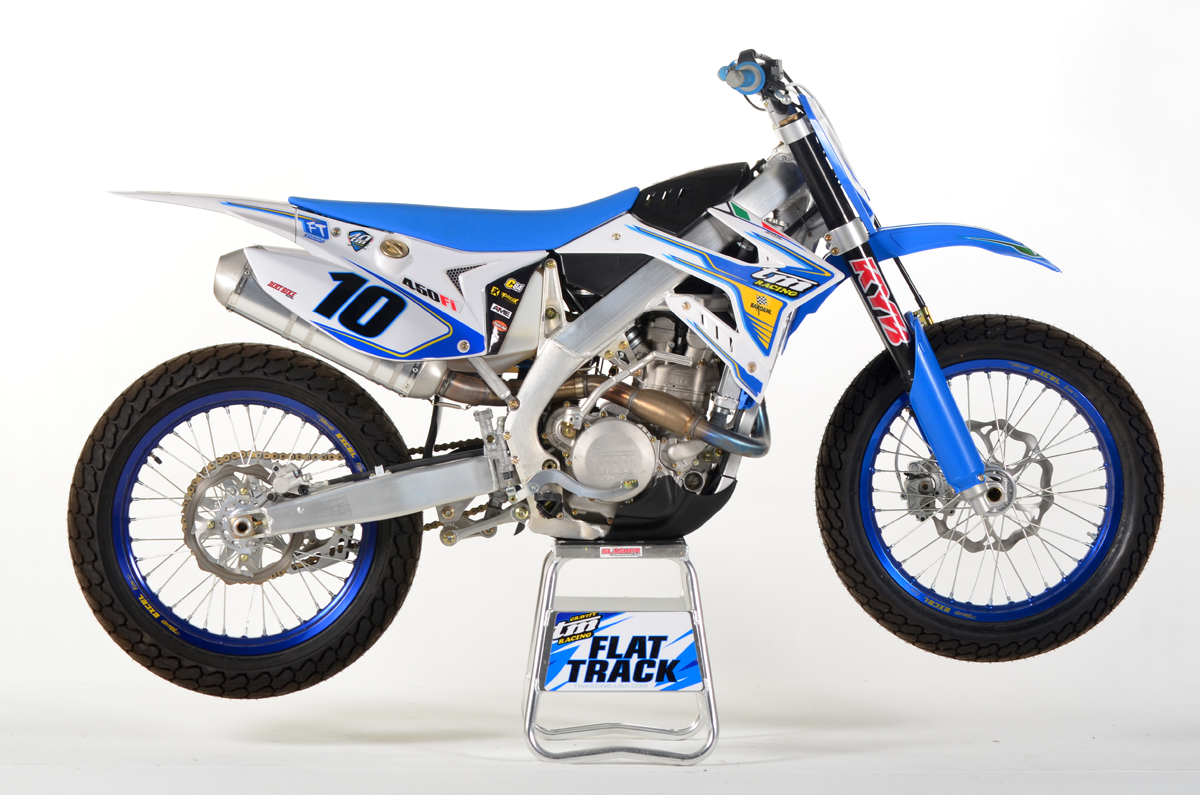 Up front, we admit that we know nothing about short track. But the TM 450 looks so cool that we had to try it. It’s a little hard to believe that an Italian company would know anything about short track, either, but evidently, TM’s experience with Supermoto allowed them to develop the bike easily. 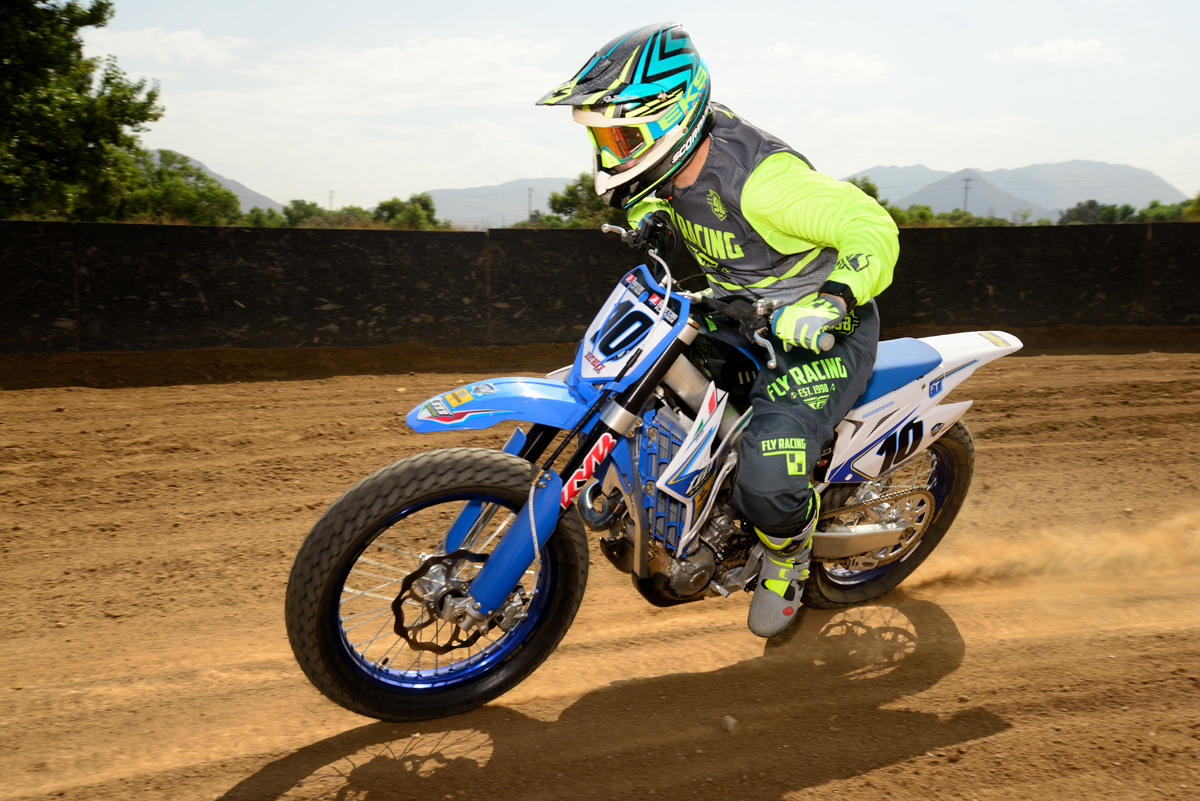 We tired the bike at Milestone’s flat track and learned a lot. Unfortunately, you can’t really get the technique without a steel shoe. Flat-track regulars are rolling their eyes right now. We’re still messing with the bike and will have more to say in the print edition of Dirt Bike.

JONNY WALKER AT THE MEGAWATT

Jonny Walker has had a rough year, but he was back on top at the last Red Bull Hard Enduro. Amazing stuff. 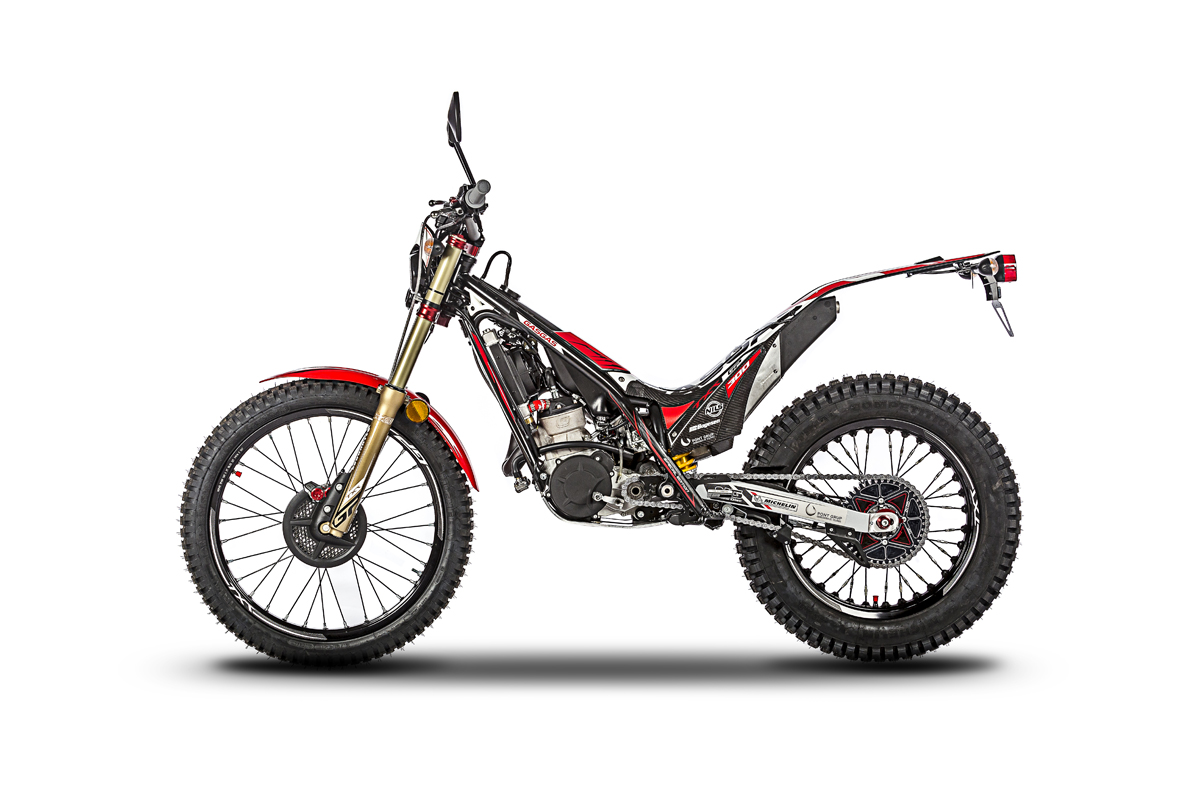 Gas Gas presents the new TXT GP 2018, the most exclusive and wildly exciting thoroughbred of its trial saga. A special edition, with a markedly sporting character, in which Gas Gas has taken care of every last detail. A limited series committed to excellence and the highest quality of its components to offer our customers the sensations and the feel of an authentic Grand Prix trial bike. 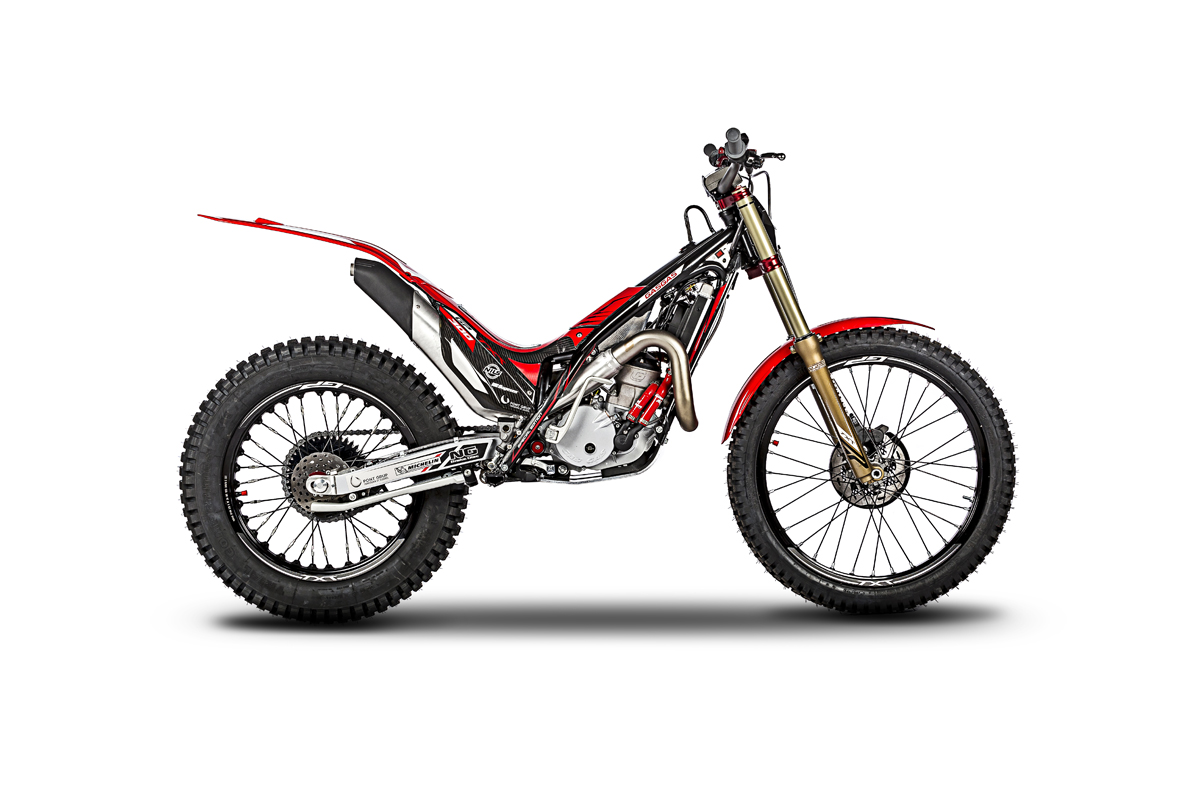 Gas Gas presents the utterly superlative model of its successful trial range: the newGas Gas TXT GP 2018. At first glance, out of all the wild horses of a herd, an impetuous steed always stands out because of its exultant and arrogant beauty. A born leader the group looks up to for its agility, cunning and resistance. The uppermost pinnacle of the saga, like the new Gas Gas Grand Prix. A special edition, inspired by the great wins, destined to become an object of cult for the passionate followers who strive to experience the same sensations as an official rider competing on an authentic trial thoroughbred.

In its tireless quest for excellence, Gas Gas has made a commitment to a long list of top quality components for its most exclusive trial model, the new Gas Gas TXT GP 2018, a direct legacy of its vast experience in the world of competition. A long-awaited limited series that will only be produced in the Salt factory in the 300, 280, 250 and 125 cc capacities.

BLAST FROM THE PAST: DAVID BAILEY MOTOCROSS DES NATIONS 1983