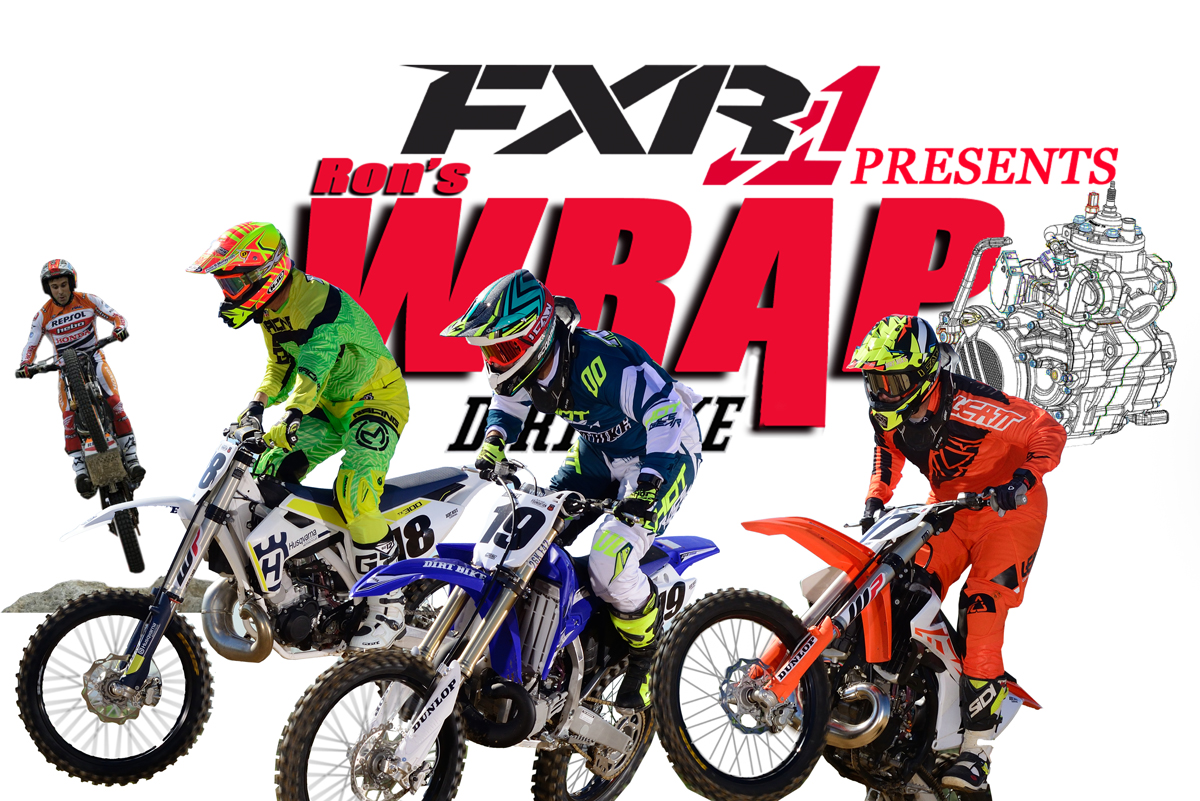 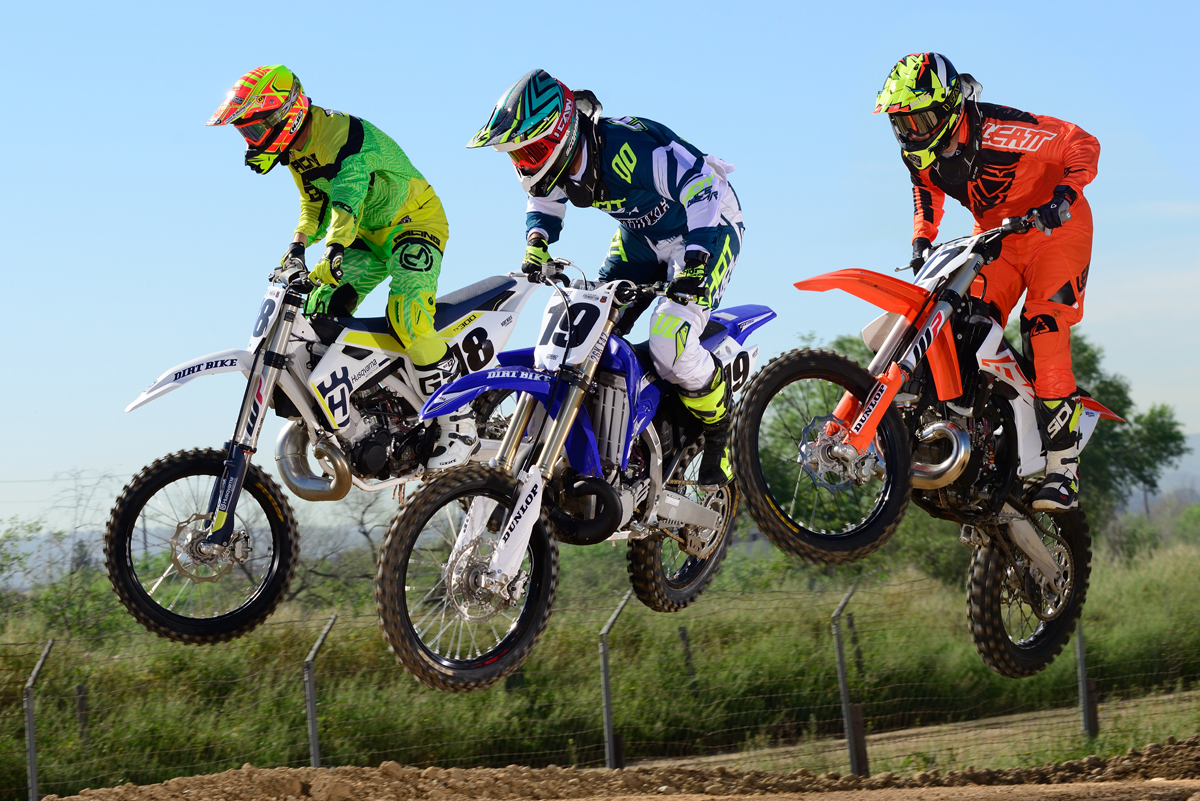 This week we’ve been mixing gas and pretending like it’s 1999. It’s all about a 250 two-stroke MX comparison, the likes of which we haven’t seen in about 10 years. The 2017 Husqvarna TC250 and the 2017 KTM 250SX are all-new, and the Yamaha YZ250 was at least updated two years ago. Of course, the Husky and KTM come out of the same factory and use many of the same parts, but that doesn’t change the fact that two-strokes are clearly receiving more attention now than they have in a very long time. 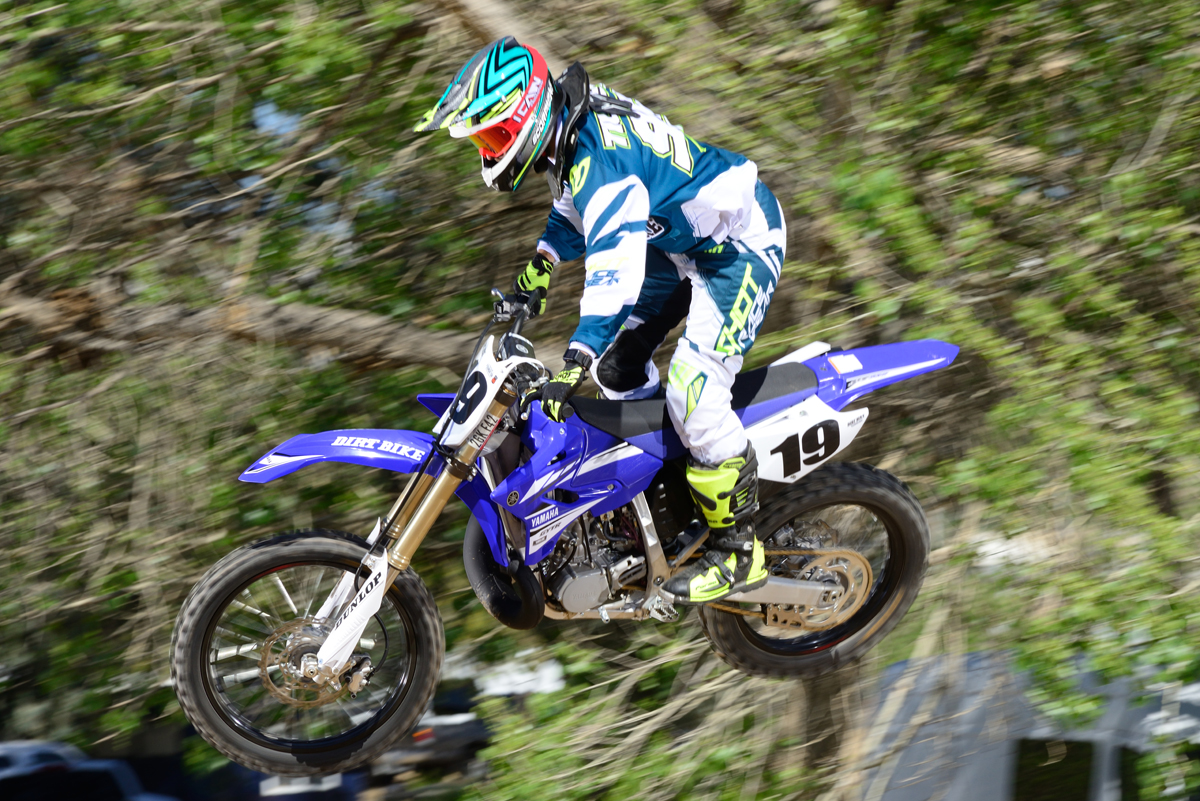 In our last 250 two-stroke shootout, which I’m guessing was somewhere around 2005, the Yamaha emerged as the favorite. Shortly afterward, Honda, Kawasaki and finally Suzuki just gave up, creating a climate where Yamaha didn’t have to update the YZ. KTM continued to give the 250SX chassis updates, but the motor was mostly unchanged through this period. It was already more powerful than the Yamaha, but virtually everyone agreed that the YZ250 had far better suspension and overall handling. In 2015, Yamaha gave the YZ a new fork and new bodywork and now the KTM/Husqvarna factory has made two-strokes a headline priority again. 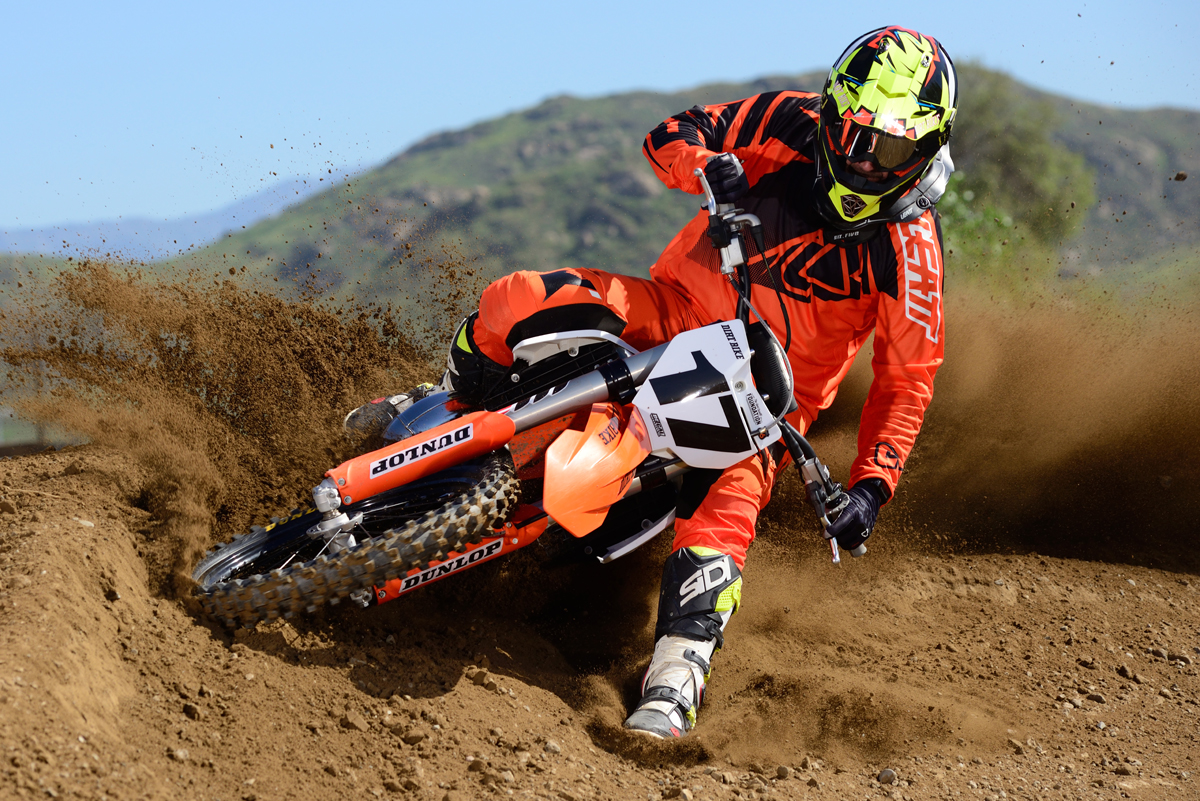 Almost all Husqvarnas have a counterpart in the KTM line. The company tries hard to make them look different, but only a few of them have real mechanical differences. The KTM and Husky 250 two-stroke MX bikes share more parts than many of the others. The suspension, engine and frame are the same. The bodywork, seat, subframe, airbox, clutch master cylinder, bars and rims are different. Those things make very little difference on the track, so it’s hard to separate the KTM from the Husky in the conclusion. 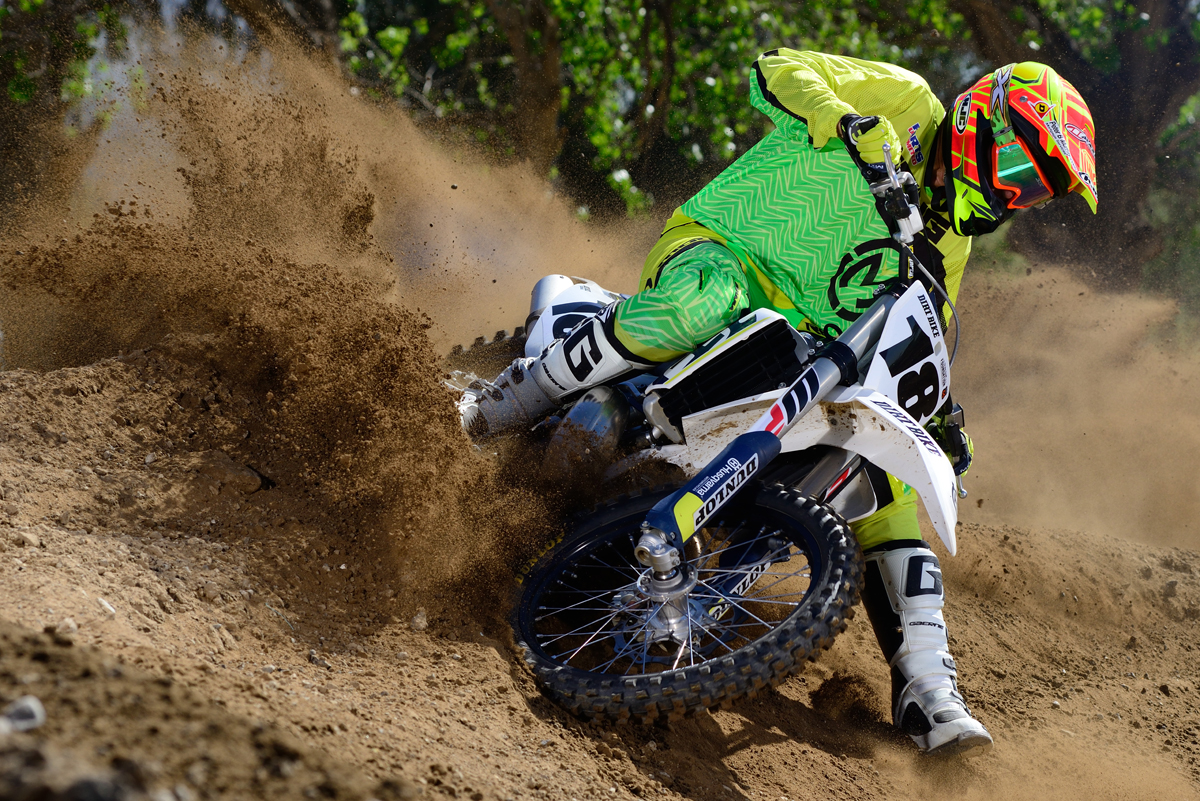 When you compare them back to back, it’s clear that the Yamaha is much easier to ride. The power is smoother, the jetting is cleaner and the suspension is softer. In every other quantifiable way, the KTM and Husky come out on top. They’re about 8 pounds lighter, they vibrate less and their motors are much more powerful. In fact, the power is such a big difference, you wonder if it’s too much. Certainly, on a track with good traction the Yamaha’s lap times will suffer, but in a non-race situation the YZ is a more fun bike to ride. In the suspension department, the air fork used by the KTM and Husky can be adjusted to any rider/track combination, whereas the coil-spring fork on the Yamaha will always be a little soft for serious MX. We’ll be working on this test for a few more weeks and it will appear in the June, 2017 print edition of Dirt Bike.

Glen Helen has a series of video interviews that feature motorcycle industry icons and celebrities. In this episode Tom White (White Bros.) and Nick Metchkoff (LA Sleeve) talk about the early days and how they were a part of the swift growth that the business experienced in those days. It’s a little long, but if you’re an industry nerd, you find it interestig.

Since taking over as the head of AMA’s off-road racing program, Erek Kudla has made the ISDE his priority and completely revamped the way we select our team. So far, the qualifiers have been well attended despite being much earlier in the season than ever before. The Idaho round last weekend, in fact, almost didn’t happen. It was moved at the last minute due to snow and took place entirely at the Owyhee Motorcycle Club’s private grounds on the outskirts of Boise. Justin Morgan and Nick Stover split the two days in the LOI class while David Kamo was the top non-LOI rider (with no intent to qualify for France). Mark Kariya was there and did full coverage on Facebook. Follow the link: 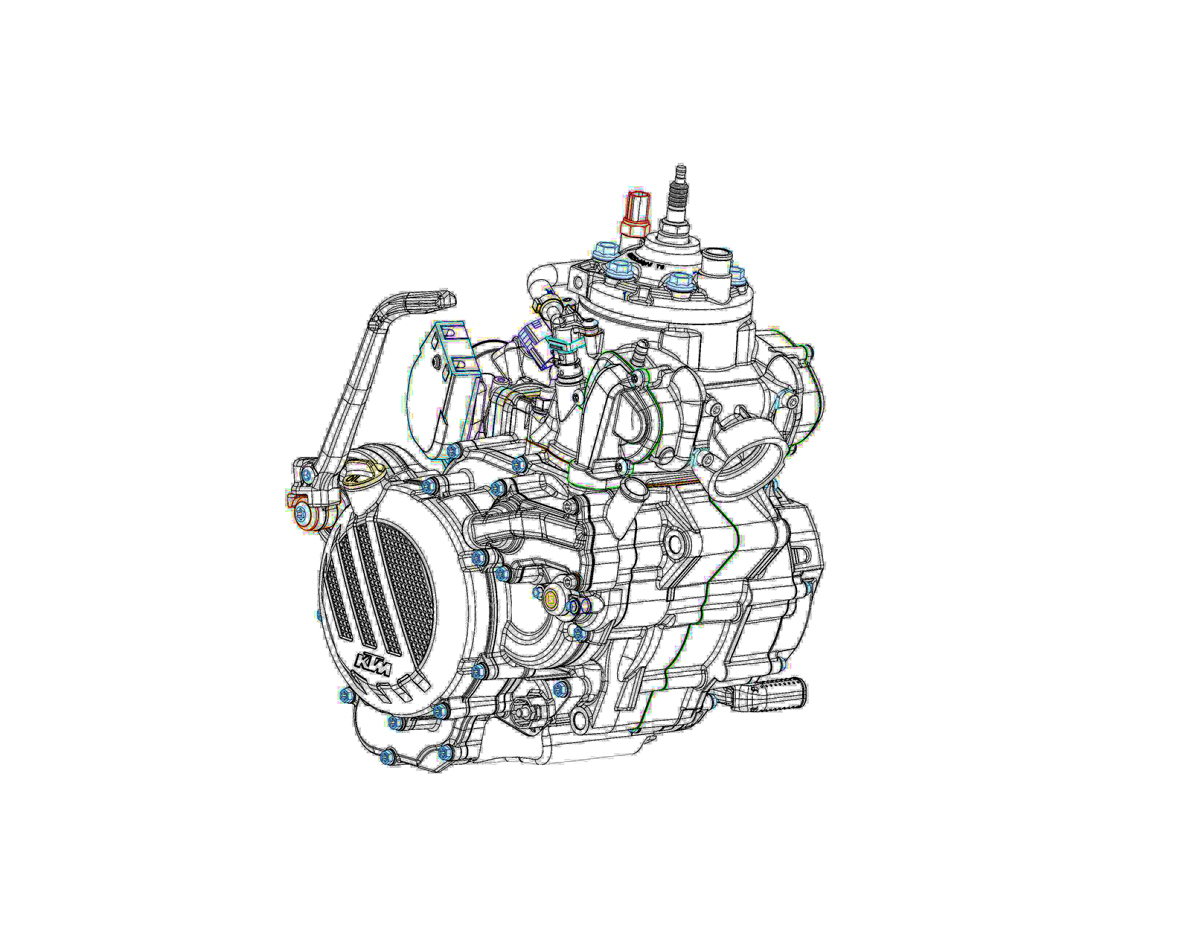 We’ve been anticipating the recent announcement of the fuel injected two-stroke for some time now. When it came earlier in the week, the most interesting part was the configuration. KTM calls its design Transfer Port Injection and in the drawing above you can see that there’s an injector on the side of the cylinder. The throttle body located behind the cylinder might just be for metering airflow, although it’s possible that there’s an injector there, as well. In the snowmobile and marine worlds, direct injection is used by Rotax and others, which requires massive pressure to inject fuel directly into the combustion chamber. Those  designs are very clean. There’s no emission information yet on KTM’s design, but all will be revealed in early May when we go to Austria to see it first hand. The 250XC-W will arrive in the U.S. next October.

The off-road season is about to start in Europe and KTM just introduced its factory team. The bummer is that Taylor Robert isn’t on the squad this year despite winning the last round in 2016. Taylor wanted to stay in the U.S. this year and his season was put on hold when he crashed at the King of the Motos. He’s still recovering from that. That leaves Matthew Phillips (Australia, Sherco) as the leading contender along with Mathias Bellino (France, Husqvarna), Steve Holcombe (GB, Beta), Nathan Watson (GB, KTM), Loïc Larrieu (France,  Yamaha), and Christophe Nambotin (France, KTM) to fight it out. Here’s the schedule:

Speaking of Europe, the X-Trail championship is amazing. Last week, the second round was held in Austria. Check it out–it’s unbelievable what they do. Toni Bou won (he also won the first round in February) and Adam Raga is currently running second in the points.

OSBORNE IN CONTROL AT INDY