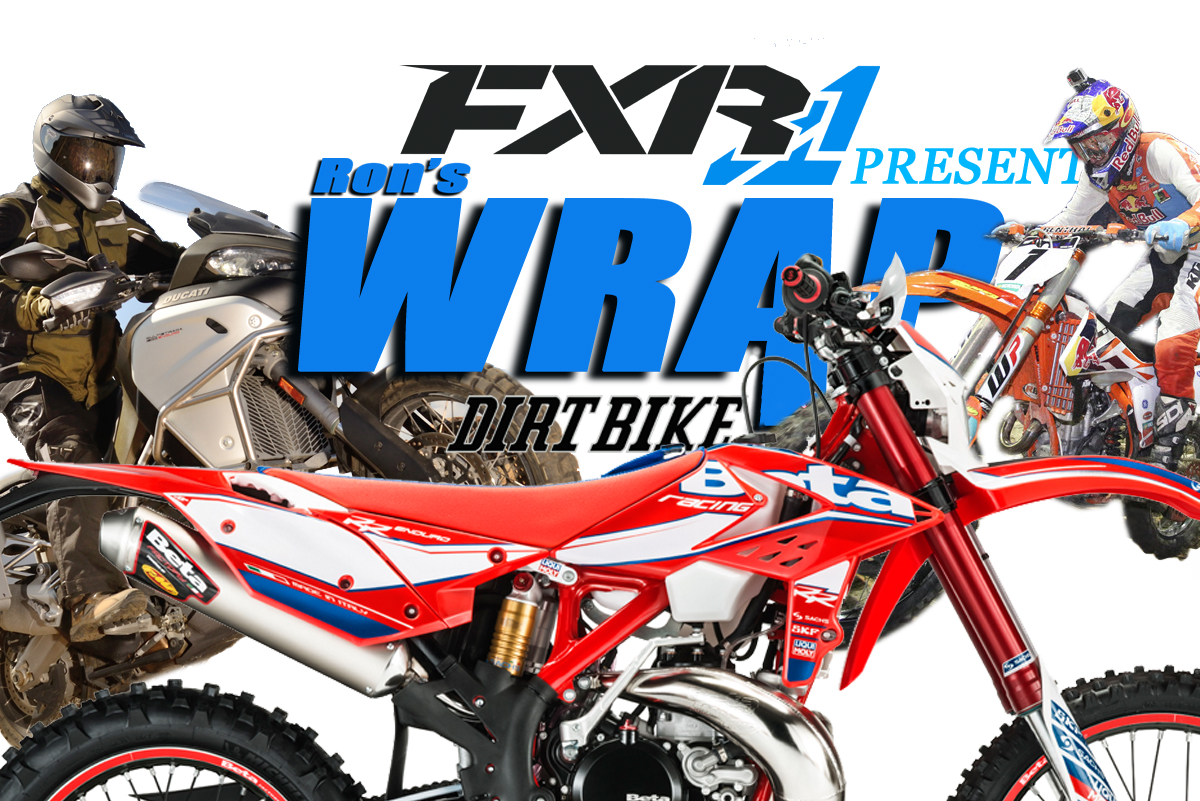 THIS WEEK AT DIRT BIKE 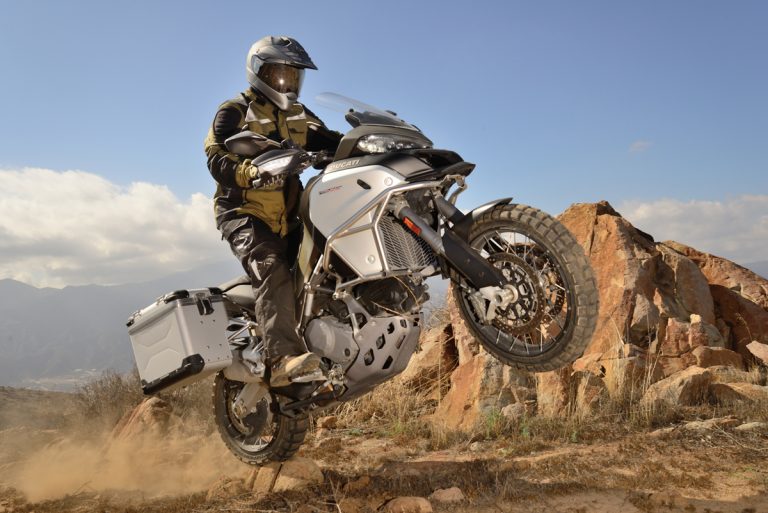 We’ve been playing with the Ducati Multistrada this week, which is an incredible motorcycle. This bike formerly was more or less a pure street bike in previous years, but with the Enduro model introduced at the beginning of last year, the engineers put serious effort into making it more dirt worthy. The best thing about it is that you can change ride modes on the fly. A thumb controls lets you cycle through five different modes: Sport, Urban, Touring, Enduro. All of those alter the power delivery, traction control, suspension and antilock at once. Very easy. The test will appear in the February issue. And about the photo? Mark Tilley is a very brave man. 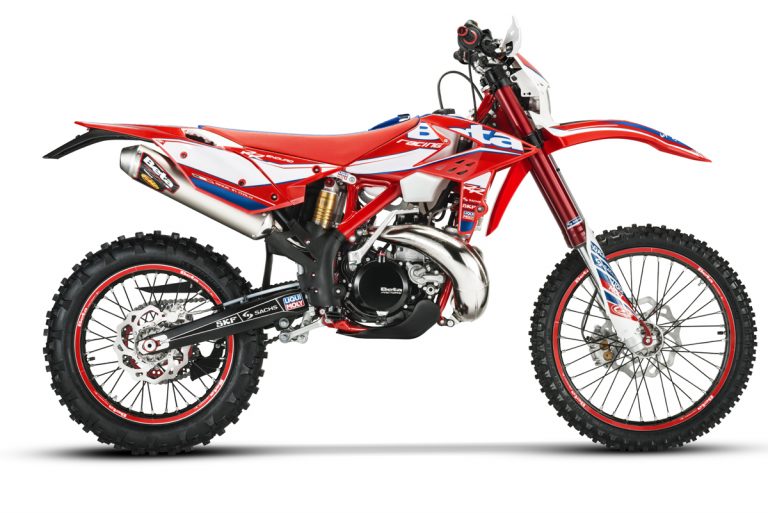 Beta just announced its new Race Editions, which include all the current models in both two-stroke and four-strokes (aside from the 125 and the Xtrainer). We’re happy to see a return to dedicated four-stroke dirt bikes from Beta. Earlier in the year, the company had joined KTM and Husqvarna in converting all its off-road four-strokes into dual-sport models. The Race Editions are red-sticker, closed-course competition bikes and the four-strokes have different mapping from the dual-sport models. If you want to go a step farther with a competition exhaust, you’ll have to do it yourself. The two-strokes have the oil-injectors removed, and all models have a list of goodies:
Quick release front axle pull
Flag style hand guards
Factory aluminum footpegs
Rear sprocket with an anodized aluminium core and stainless steel teeth
Red aluminum chain tensioner blocks.
Black Excel rims.
Racing seat
Black anodized shift lever and rear brake pedal.
Transmission oil filler cap, engine oil cap (4 stroke) and oil filter cap
Red rim stickers, special seat pocket, and Racing graphics. 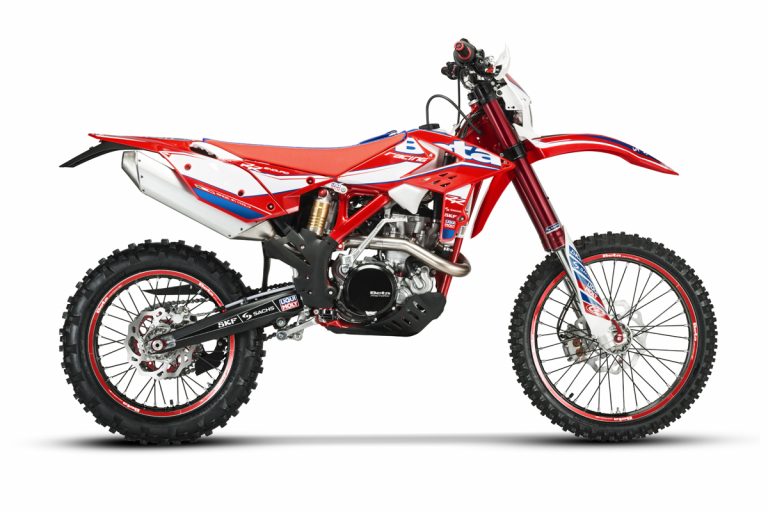 We’re big fans of Russell Bobbitt and couldn’t be happier to see him clinch his fifth National Enduro title. All last year he struggled with a back injury, and it looked like his days at the top of the enduro world might be over. The last time he won the championship was five years ago, and this year he almost wrapped it up early, coming into the final round with a 17 point lead. Congratulations Russell!

The guys at Husqvarna dug into their archives to come up with this very cool piece on the Rolf Tibblin training program. A similar story was actually featured in an early issue of Dirt Bike.
One of the true training buffs in motocross is the Swedish giant Rolf Tibblin, who won his first 250cc European crown for Husqvarna back in 1959. He regarded good physical training as an absolute must in order to become a successful rider. Not only did he preach for practicing strength, but he was also keen on emphasizing endurance stamina. No doubt he became one of the fittest motocross riders ever and in order to do so, Rolf Tibblin developed his own training regime.
For more of the Rolf Tibblin Training camp story, click here 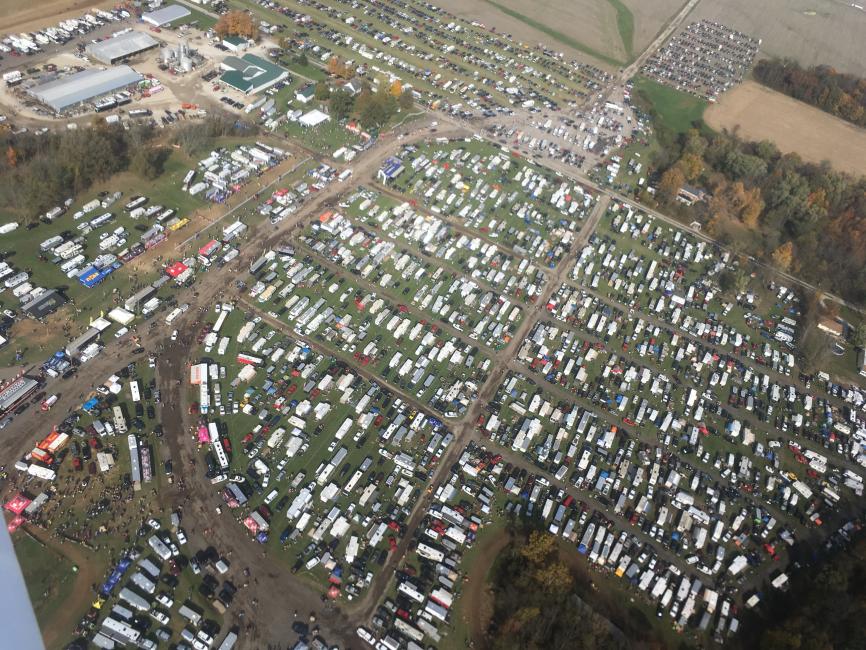 The 22nd annual running of the Ironman GNCC drew in an astonishing 2,440 unique ATV and motorcycle race entries, making this event the largest rider attended event in GNCC history. “We are elated at the number of racers that participated in the Ironman GNCC,” said Director Tim Cotter. “Nearly 2,500 competitors headed into the Indiana woods and raced under perfect conditions at our final round of the 2016 season. These statistics are a testament of the resiliency and dedication of the GNCC Racing Nation.” 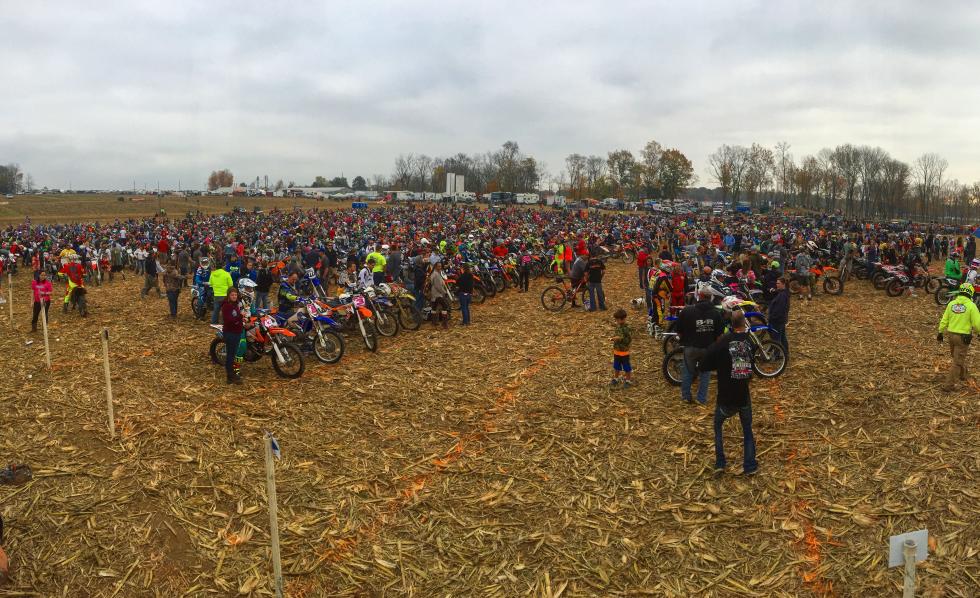 The community support that the GNCC family receives from the motorsports-crazed town of Crawfordsville is incredible. The 10-mile racecourse was decorated with local fans on both Saturday and Sunday, making this a lasting memory between AMA members of both motorcycle and ATV disciplines.

“Grassroots racing is the lifeblood of the AMA, and at the Ironman GNCC, the final round of the AMA National Championship series, we saw our largest crowd of amateur racers yet,” said AMA President and CEO Rob Dingman. “The 2,440 AMA members who participated this past weekend are a testament to the vitality of the sport, the effectiveness of the series promoter Racer Productions, and their own dedication. Congratulations to everyone for a job well done.”

The Amateur bike race on Sunday morning attracted nearly 900 rider entries, making it the single biggest race of the weekend, as well as in the history of GNCC Racing. Prior to the race start, Tim Cotter of Racer Productions recognized the life and passing of Ironman Raceway founder, Joy Adele “Duck” Shaver, who lost her battle with cancer on Tuesday, just days before the event. Proclaiming the event to be renamed the ‘Ironwoman’ GNCC for one day in celebration of Joy and her years of dedication and love of the event, all of the women riders were asked to step to the front of the start line for recognition, along with any cancer survivors in attendance.

Ironman GNCC has long been tied to breast cancer awareness with its pink theme and fundraising surrounding the annual October event dates. Fittingly, the top three overall winners from the 894 entries in the Amateur race were all WXC competitors, namely Becca Sheets, Kacy Martinez and Mackenzie Tricker. Racer Productions is also proud to announce $7,793 raised at the event will be donated to the Montgomery County Free Clinic, continuing years of partnership with the non-profit organization dedicated to providing free mammogram examinations across the Crawfordsville and Montgomery County region.

FMF KTM’s Cody Webb took the win in Everett Washington to tighten up his fierce AMA EnduroCross Championship battle with Husqvarna’s Colton Haaker. It was his second win of the season and much needed as Haaker has already recorded four wins and still holds a ten point lead heading into the Boise, Idaho event this weekend.

With only two events remaining and Haaker riding amazing this season to take four wins and two second place finishes, Webb is going to need to keep the pressure on in Boise. These two riders have dominated the series so far in 2016 taking all of the wins available despite a strong field of competitors.

The battle for third is also very interesting as Husqvarna’s Mike Brown currently holds a narrow four point lead over RPM KTM’s Ty Tremaine. Brown is now in his 40’s while Tremaine is just twenty years old and took his first ever AMA EnduroCross podium finish at the Everett event. Brown wants to prove he still belongs while Tremaine wants to prove it is now his time.

Add in the Factory Beta team of Max Gerston and Kyle Redmond, SRT Racing’s Cory Graffunder along with up and coming Noah Kepple and Trystan Hart and you have an exciting field of riders to follow. And longtime EnduroCross stars Geoff Aaron and Taddy Blazusiak are also looking to make their way back to the front of the field again.

See you next time: