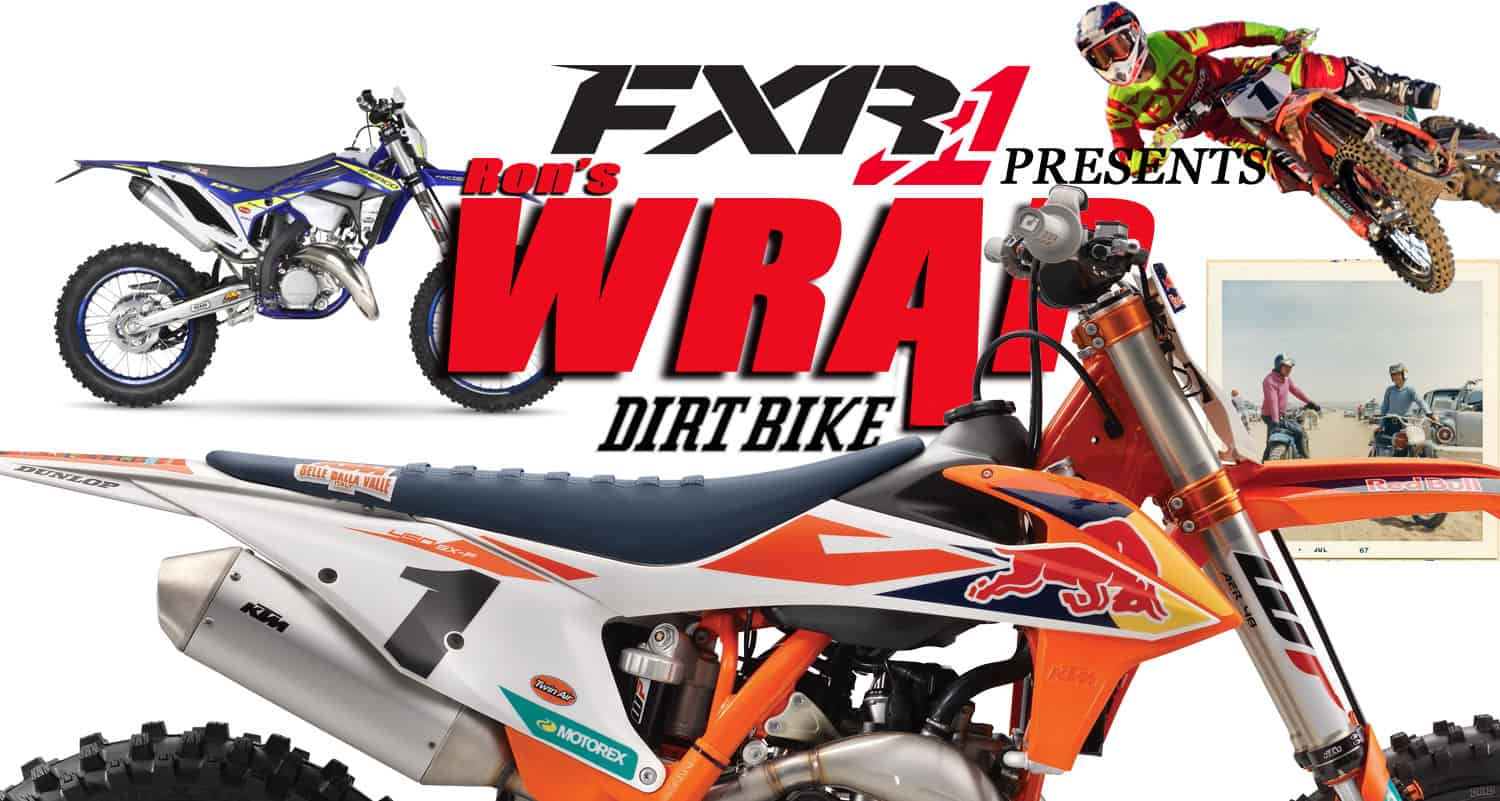 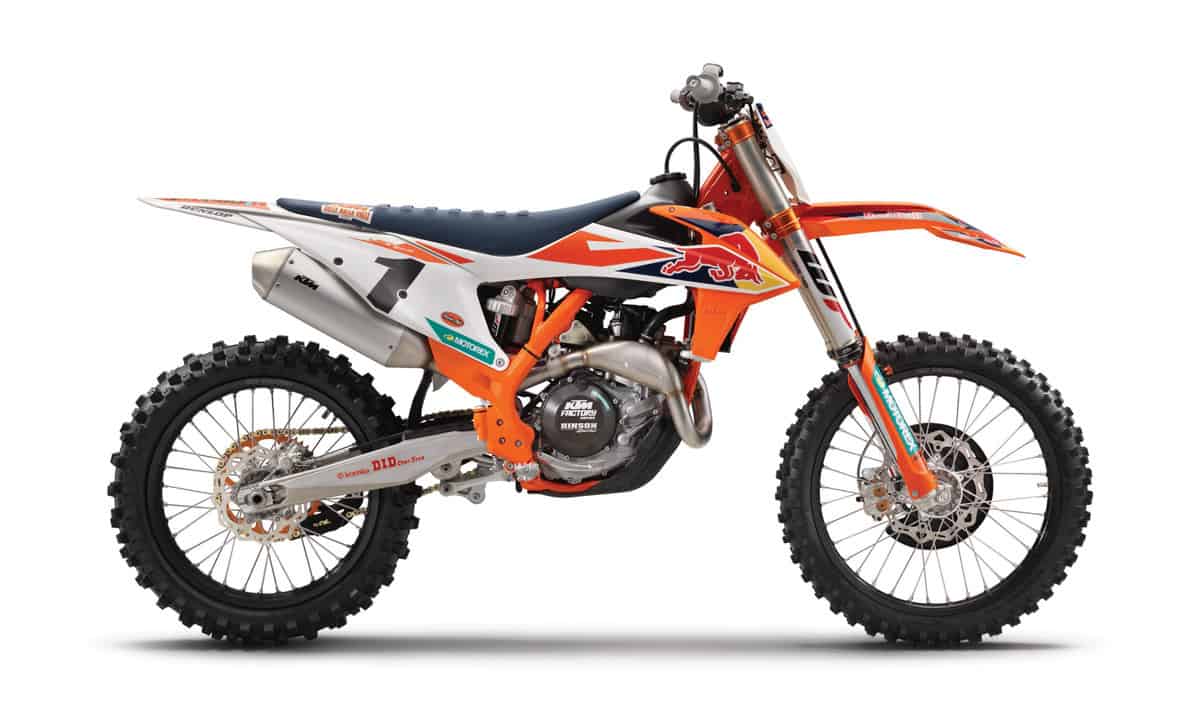 For the official announcement of KTM’s 2019 dual-sport bikes, click here

For the official announcement of KTM’s 2019 off-road two-strokes, click here.

For the official announcement of KTM’s 2019 motocross bikes, click here.

For all other 2019 models released so far, click here.

For an indication of what the 2019 KTM 450SX will be like, the Factory Edition is an indicator of things to come.

The release of a limited number of Factory Editions to the public has become an annual tradition with KTM, whether or not there are any substantial changes to the engine and frame. It just so happens that this time around, the changes are significant–so much so that the bike would technically be illegal by AMA rules if it weren’t offered to the masses. It’s an advance scout for the 2019 production KTM 450SX-F, and it’s here now. The new features fall into two groups; those that are here to stay and those that are just for the Factory Edition. KTM hasn’t released any official information on the 2019 model year, but it’s rather obvious what will be coming next summer. Here are the features that are new and will probably be on next year’s bike:
New head; one pound lighter and 15mm shorter
The cam has a new surface treatment.
New exhaust pipe with a contoured resonance chamber.
Pankl transmission.
Stiffer frame.
40mm longer aluminum subframe.
The swingarm has a chain adjustment slot that is 5mm longer.
All of the bodywork is new and more compact.
New design for the WP AER 48 fork
New shock valving Here are the features that are on the Factory Edition alone: 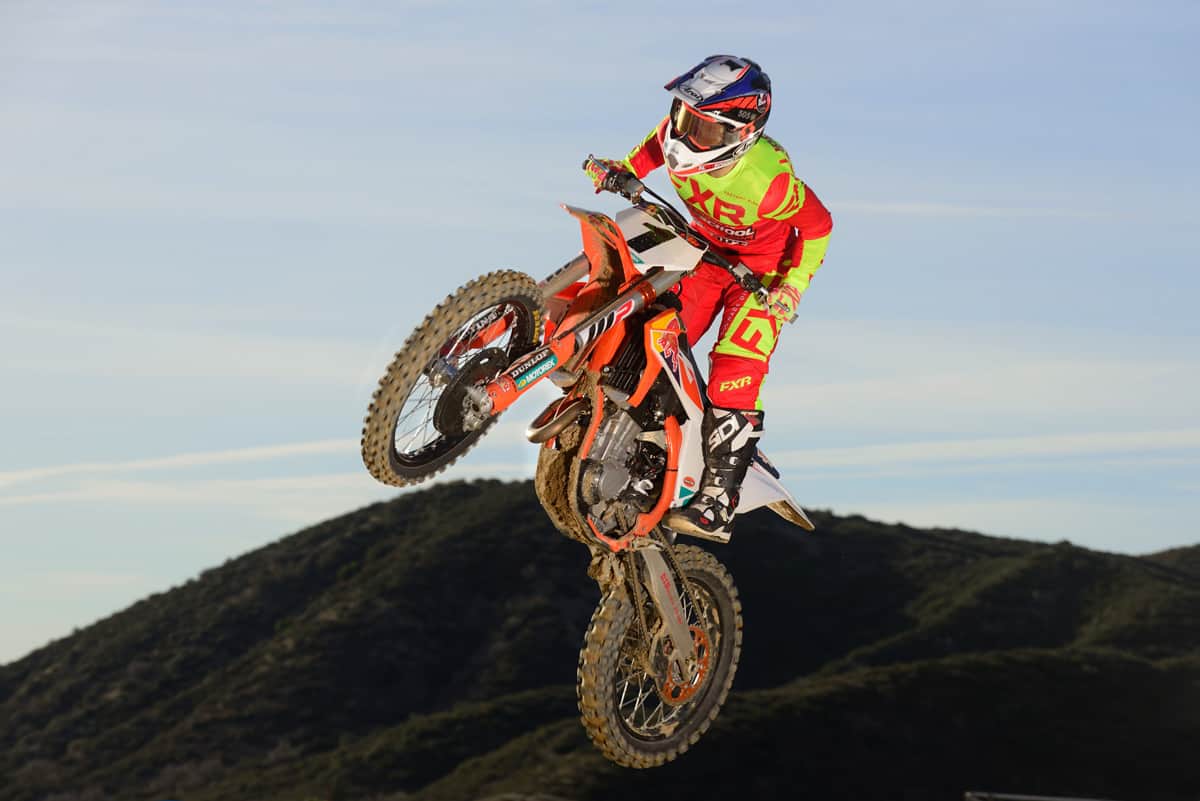 We have ridden the bike a few times now and believe it or not, it’s faster. We really thought we had reached the practical horsepower limit for a 450 motocross bikes, but the Factory Edition clearly has more power through the middle and on top. We have to admit that it’s still manageable, even in poor traction. The suspension also seems noticeably stiffer. The WP AER 48 fork has a smaller air volume in its balance chamber now. This is the chamber that opposes the main air compartment. Most riders don’t know it’s there because it isn’t externally adjustable on the WP fork. At this point, we don’t know if the stiffer feel is because of the change in the fork, the stiffer frame or the fact that it needs more break in. We’re still testing and the story will appear in the April, 2018 print edition of Dirt Bike.

A SWEDE IN THE MOJAVE 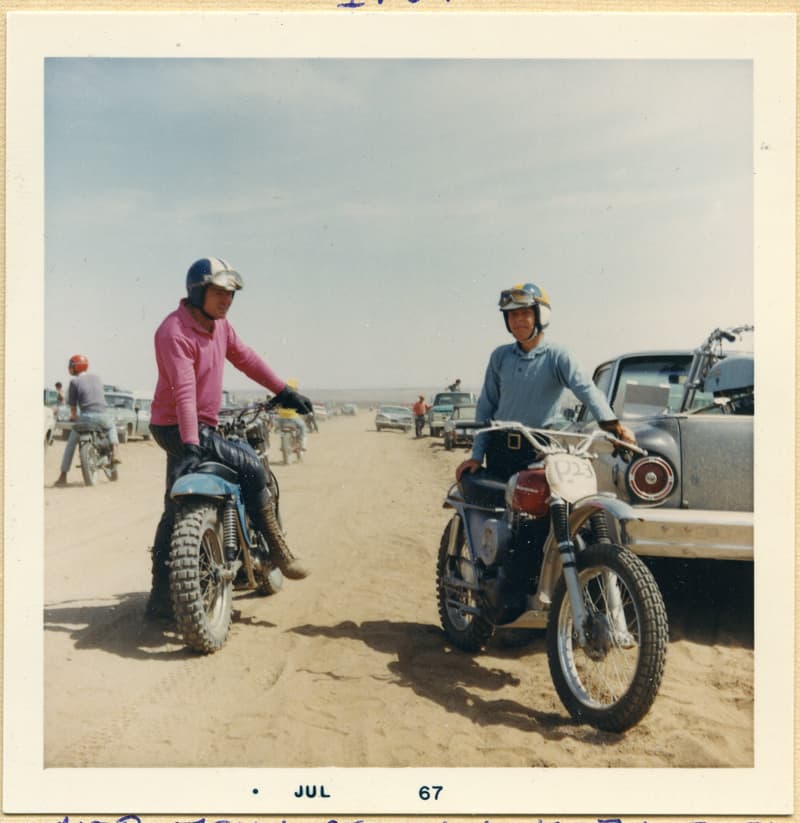 Ken Olausson is a Swedish motorcycle journalist who often contributes to dirtbikemagazine.com with his “Husky Good Old Times Blog” column. This month he has a fun story about one of his first involvements with Husqvarna, which happened in the Mojave desert of California in the days of the Beach Boys. Click the image above for the full story. 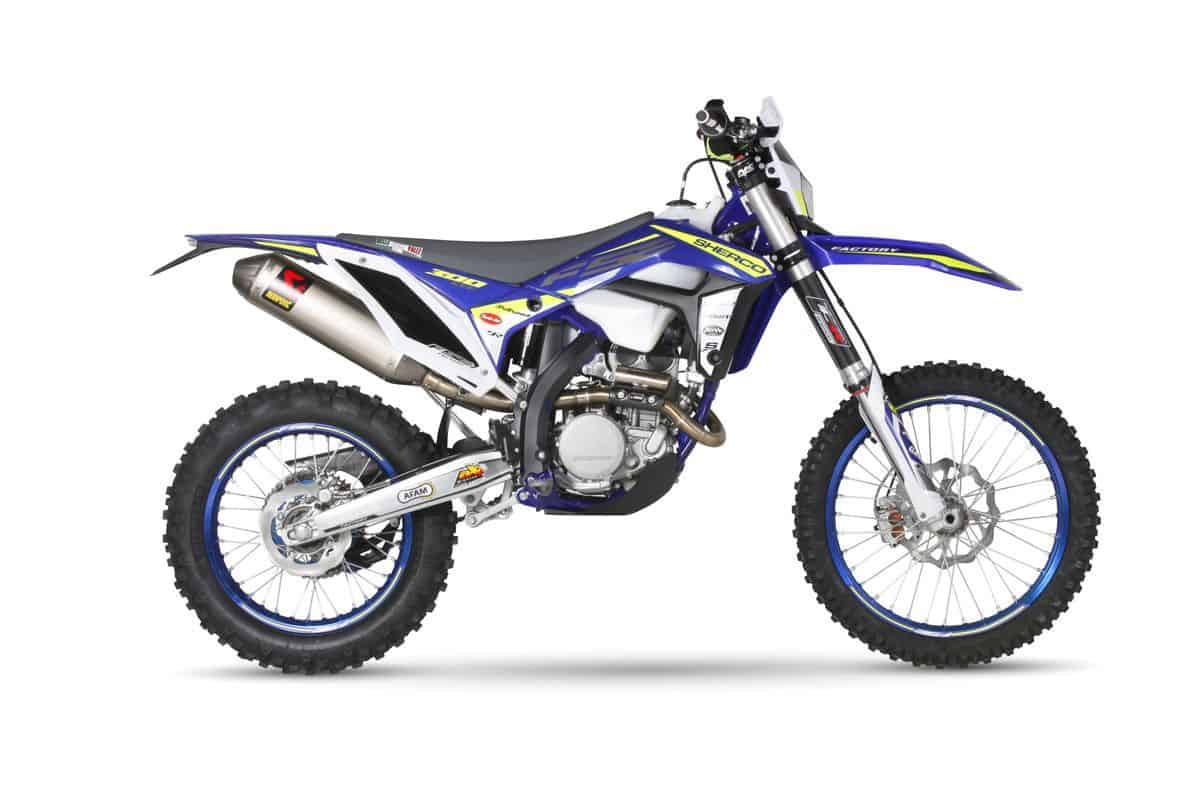 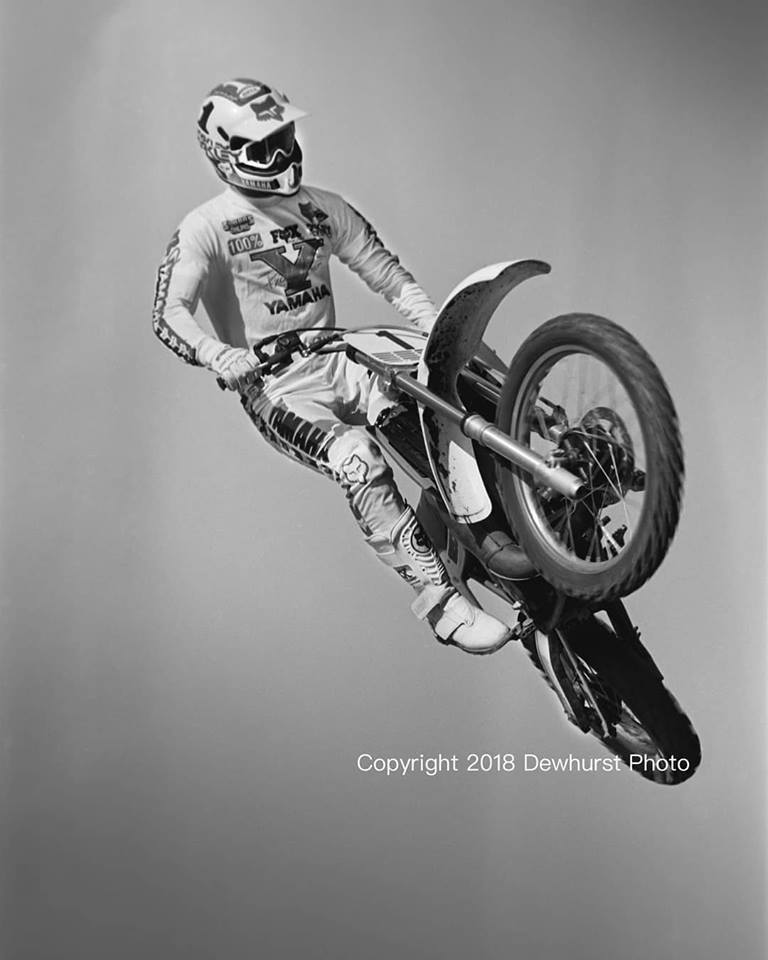 No, we didn’t see young Ricky Johnson on his YZ250, but we did see the man who shot this amazing photo and lots of others like it. David Dewhurst is now one of the top automotive photographers in the world, but he keeps his motorcycle roots close. He restored a 1978 Husky 390 for the next Husky World Championship, which is coming in March. 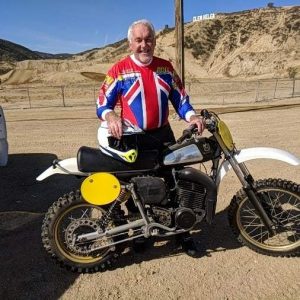 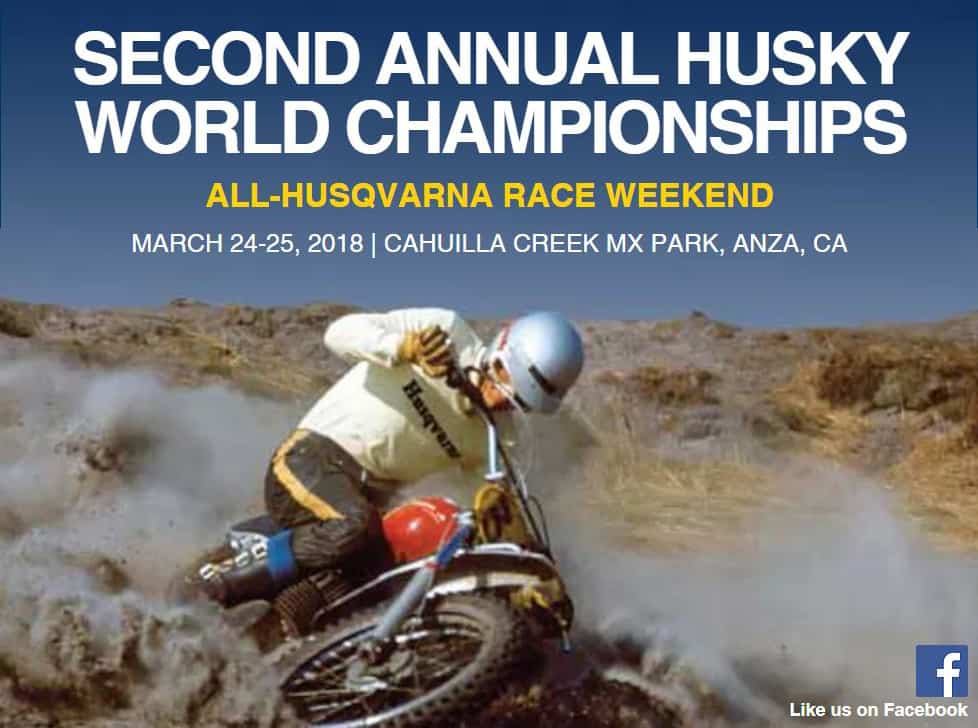 The other old bike race series on our schedule is the Old School Scrambles. We noticed there might be a conflict between the two, so there might be changes. 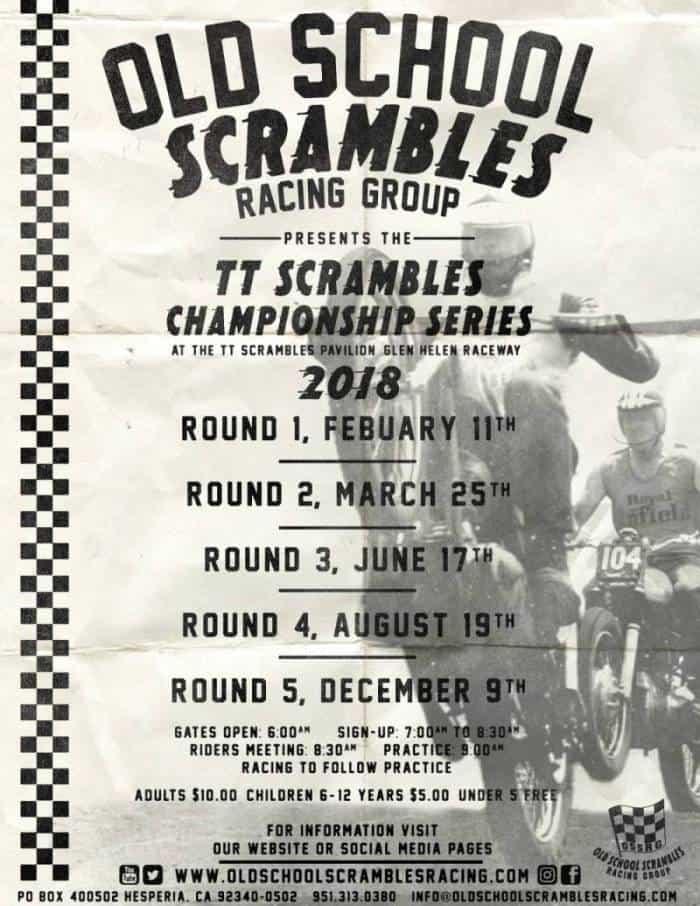 We’re keeping close tabs on the Dakar Rally, which has five Americans this year. It’s been an unusually difficult event, with flooding causing the cancellation of two stages. Currently, Austrian Matthias Walkner has the lead and, barring disaster, he will win it for the Red Bull KTM team. Honda’s Ricky Brabec has had a good run, finishing as high as second in a stage. He’s in sixth right now. And Andrew Short is having a spectacular rookie run, now in 17th. All the results are posted each day here on dirtbikemagazine.com. 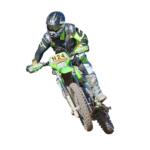 HUSKY BLOG: A SWEDE IN THE MOJAVE