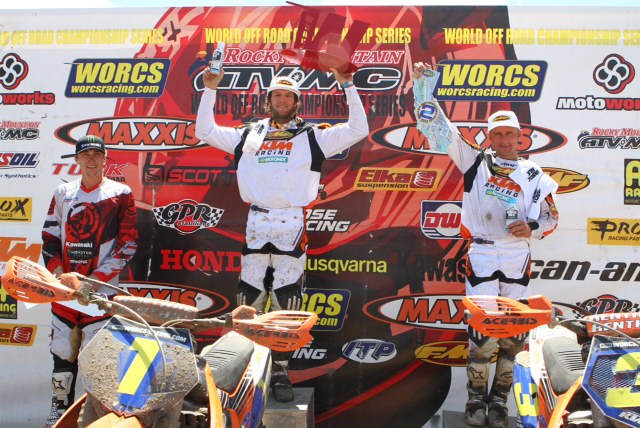 Factory FMF/KTM Team riders Kurt Caselli and Mike Brown topped the podium at the sixth round of the WORCS held at Honey Lake MX Park in Milford, CA.

The first moto of the weekend was held on Saturday and saw Caselli out front early as he rounded the second corner in 2nd place behind holeshot winner Taylor Robert. Caselli was able to move around Robert and take the lead before the end of the first lap. Robert remained close to Caselli for the first half of the race before he suffered a crash and Caselli was able to pull out to a 20 second lead.

Caselli’s teammate, Brown, had a decent start in the first moto coming around the first lap in 6th place. “It was very hard to make passes on this track,” remarked Brown after the race. “This course was very technical with tight single-track off-road sections and lots of rocks. You had to be creative to pass and definitely had to push the envelope.”

Brown had made his way up to 3rd place before he crashed down a large drop off when his front wheel got stuck in a rock on the landing and sent him over the bars. The damage to the bikes radiator was significant and Brown had to nurse the bike to the finish in order for it to not overheat due to the broken radiator. In a remarkable ride to the finish he came across in 6th place salvaging some much needed points.

In Sunday’s second moto, Brown was determined to get out front early to avoid having to spend time passing through the pack. He kept his throttle twisted the longest as he ripped down the start straight and hung on to take the holeshot. This time it was Brown who was pressured by Robert early on before Robert suffered a crash that caused him to DNF. From that point on, Brown checked out and cruised to a second moto victory.

Meanwhile, Caselli was the one who had to climb through traffic on day two. He started around 8th place and spent the first few laps finding lines to eventually make his passes. One by one, he picked riders off until he finally moved into 2nd place behind his teammate and crossed the finish in 2nd place. Caselli’s 1-2 results earned him the overall for the day while Brown’s 6-1 finishes were solid enough for 2nd place.

With six rounds in the books, Caselli leads the series by 26 points heading to round 7. Brown currently sits 4th overall in points.

Also putting in a notable performance was RPM/KTM Women’s ride Kacy Martinez who won the moto by 3 minutes over fellow KTM rider Elizabeth Bash. “This win was very special to me today because it is my birthday and it is the perfect present to give to myself,” remarked Martinez after her win.

OMA NATIONALS: FOUR IN A ROW FOR WHIBLEY