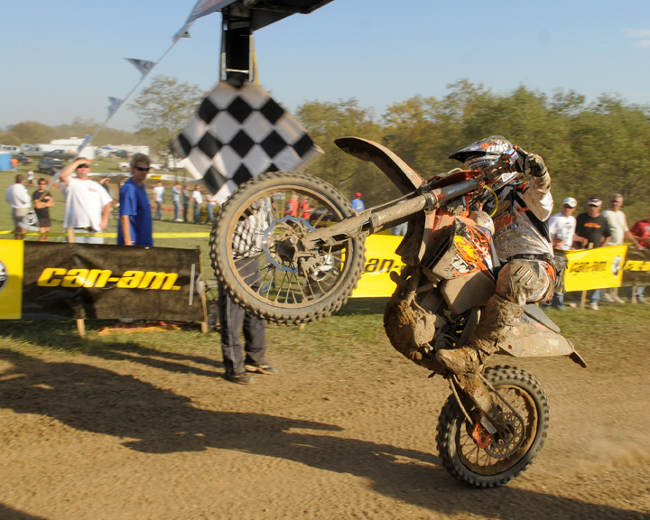 St. Clairsville, OH – FMF/KTM rider Kailub Russell won his second straight GNCC XC2 Championship with a win at the 12th round of the season at Powerline Park.

Russell had a bad start off the line rounding the first turn in second to last position right next to rival Jason Thomas. The two riders quickly moved up through the pack and by the end of the first lap Kailub sat in 5th place. He turned up his pace and caught two more riders by the end of the second loop to move into 3rd.

Going into the race Russell knew if he won the race and Thomas finished 3rd or worse he could wrap up the championship one round early. On lap three he saw Thomas ahead of him and began to close in. At the end of the third lap he passed Thomas and moved into 2nd. His gaze was now set on current leader Scott Watkins as they reached the halfway point.

With three laps to go Russell caught Watkins and made the pass to take over the lead. Once in the lead Russell picked up the pace again and pulled from the pack. When he crossed the checkers to take the win he was nearly one minute ahead of Watkins. Thomas finished behind Watkins in 3rd. The finishing order allowed Russell to take the number one plate one round early!

Fellow FMF/KTM rider Steward Baylor had a decent race at the Powerline Park GNCC. He started in 2nd place off the start and stayed within the top five the remainder of the race. He eventually finished 4th overall for the day.

In the XC1 class Cory Buttrick got off to a great start. He put his KTM 350 SX-F in 2nd position around the first corner and quickly took over the lead. Halfway around the first loop Buttrick made a mistake and crashed hard. The crash resulted in a broken front wheel which he had to return to the pits to repair. After the repair, Buttrick reentered the race in near last position 3 minutes 30 seconds down from the leader. For the remainder of the 7 lap race Buttrick put his head down and charged forward trying to pick off as many positions as possible. At the end of the race he had managed to move from 17th to 7th overall.

2010 GNCC Women’s class Champion Maria Forsberg crushed the competition once more to earn her 11th win of the season. This time she won the race by a margin of 10 minutes! Forsberg plans to race against the men in the XC2 Pro Class at the final GNCC.