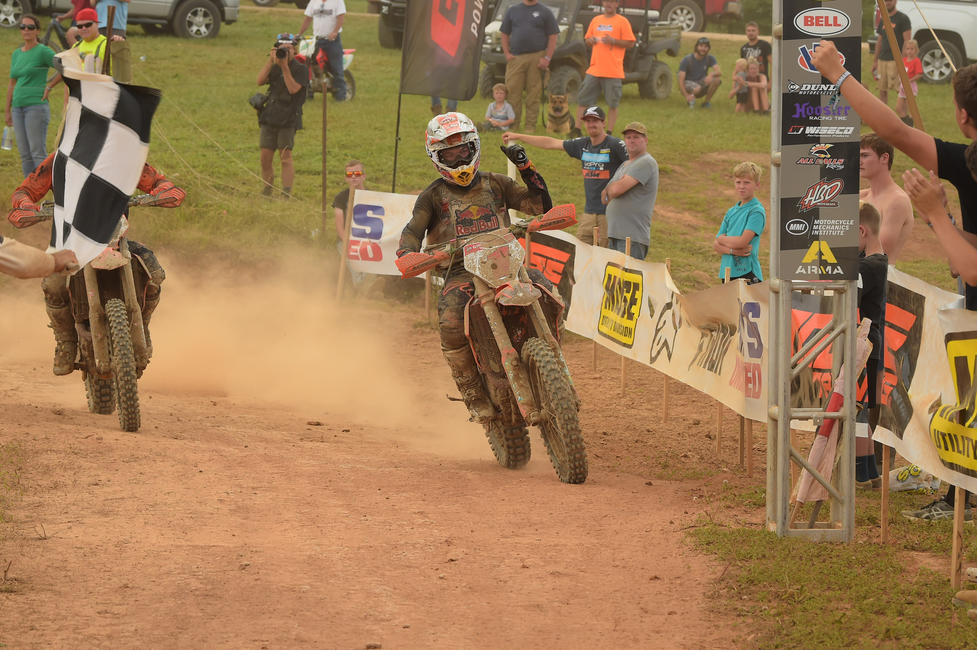 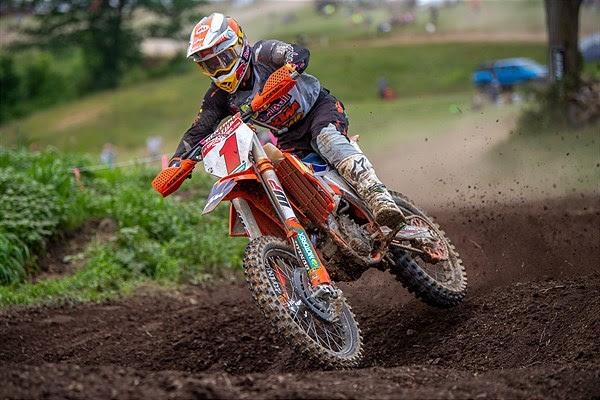 FMF KTM Factory Racing’s Kailub Russell raced his way to a 66th-career XC1 Open Pro victory on Sunday in Millfield, Ohio as his local family and friends enjoyed a top-performance by the seven-time GNCC Champion at the historic John Penton GNCC.

As racing got underway it was FMF/KTM Factory Racing’s Kailub Russell jumping off the line first to earn the $250 All Balls Racing XC1 Open Pro Holeshot Award. During the opening lap Russell would have company from his teammate Ben Kelley, who moved into the lead as they came around to timing and scoring. Russell would make the pass for the lead on the second lap, and never look back. Russell would lead the way for the remainder of the race, pushing his gap to 58 seconds by the time the checkered flag flew after three hours of intense racing. Russell earned his 66th career overall win, and continues to hold the points lead after seven rounds of racing.

Babbitt’s Online/Monster Energy/Kawasaki’s Josh Strang was off to a top three start, and would move into second overall on the third lap of racing. Strang would push for the duration of the race, reaching almost complete exhaustion by the time the checkered flag came out. Strang continues to hold second overall in the National Championship points standings, with just 33 points separating him and Russell.

After a top five start to the day, FactoryONE Sherco’s Grant Baylor was on a mission to land on a podium finishing position for the second time this season. Baylor would put his head down and push through the dusty, hot conditions to move into third overall by lap three of racing. Baylor would continue to push, and on the last lap would come through timing and scoring just 4 seconds behind Strang. After seven rounds of racing Baylor sits fourth overall in the XC1 Open Pro standings.

In the XC2 250 Pro class it was Rockstar Energy/Factory Husqvarna Racing/Kari Resources’ Craig DeLong coming through to take the class win, as well as finishing fifth overall on the day. DeLong would finish over two minutes ahead of his fellow XC2 competitors. This was DeLong’s third win of the season, which also moved him into the points lead in his class.

Factory Beta USA’s Cody Barnes earned his first podium finish of the season in the XC2 class with a second place finish. Barnes had a great jump off the line and would set himself up in the third place position to start off the day. On the third lap of racing, Barnes made the move into second and would continue to push for the remaining laps of the race.

Trail Jesters KTM’s Jonathan Girroir had work his way up to a podium finish after starting off the race back in fifth place. Girroir steadily made his way through the pack of riders, making the necessary passes he needed to earn a spot in the top three. After the seventh round of racing, Girroir sits third in the XC2 points standings.

Coming through to take the FMF XC3 125 Pro-Am class win was Moose Racing/Coppersmith/XC Gear’s Zack Hayes. Hayes would grab the early lead, and without looking back he would continue to hold that lead position all the way to the checkered flag. Hayes remains the points leader in the FMF XC3 class as the series heads to Indiana for round eight of racing in two weeks.