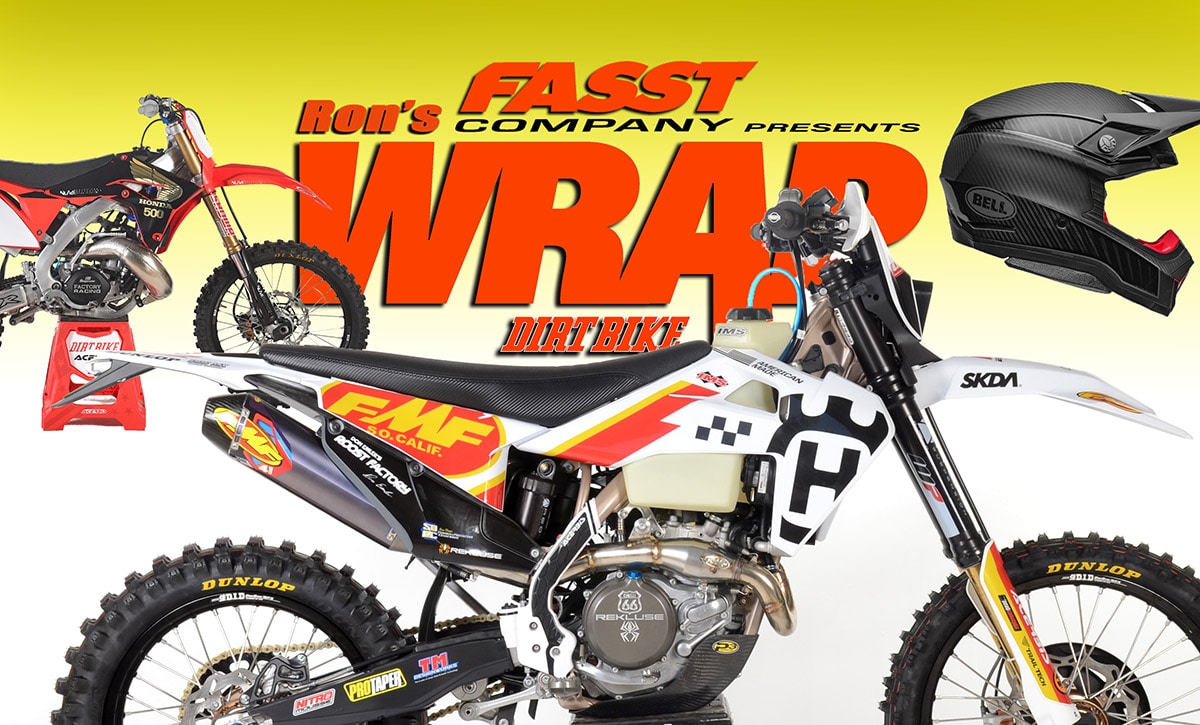 Donny Emler Jr (aka “Little D”) at FMF has been working there pretty much his whole life and has seen some of the coolest bikes in the world pass through the shop. His latest personal bike is a very well appointed Husky FE501S dual-sport. His personal emphasis has shifted over the years and now he’s in the growing ranks of riders who want to integrate riding with his family life. A dual-sport/off-road bike is the perfect way to hang out with his wife Kirsten and six-year-old Ethan. We got our hands on Little D’s Husky and took it for a ride. 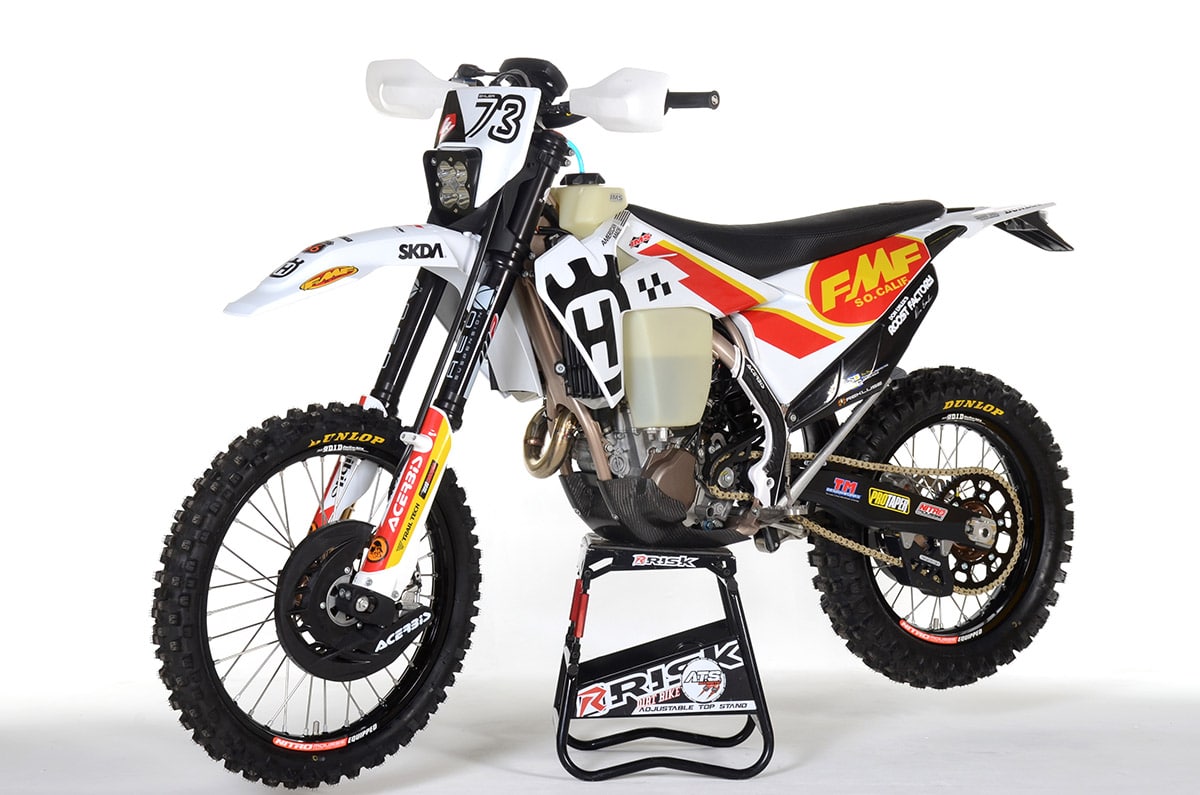 The project foreman was David O’Conner at DOC. Like many people who build FE projects, he had to set all the street legal dual-sport parts aside because virtually any modification officially makes the bike a closed-course competition bike.  It was remapped for the FMF Factory 4.1 exhaust system. What we like about this build is that it’s not just a full-blown race bike. Donny is a real off-road rider–always has been. The stuff you see on this bike reflects that. It has a big IMS tank and a Trail Tech Voyager GPS. It also has Nitro Mousse tire inserts. The suspension is a little over the top.  The fork started off as the XPLOR 48, but has WP’s cartridge conversion and Ti Nitride lower tubes by AEO.

The clutch is a Rekluse, the skid plate is a P3 Carbon and there are a number of TM Designs guards sprinkled here and there. What really makes the bike cool, though is the care and detailing that went into the build. The frame was power-coated gold and photos do NOT do it justice. We already have a video in the works and the full story will be in the July 2021 print edition of Dirt Bike.

We got to be among the first riders to wear the brand new Bell Moto 10 Spherical at Cahuilla Creek this week and we came away very impressed. Just putting it on tells you that it’s something new and very different.

Everything is new with this design, although the Moto 10 does uses the same magnetic cheek pad design as the Moto9 as well as a similar visor attachment. The shell is assembled from multiple pieces and has excellent air flow. The eye port is much larger than almost anything out there to accommodate the latest generation goggles, which all seem to be larger than ever. The foundation of the design is the latest version of the MIPS system. 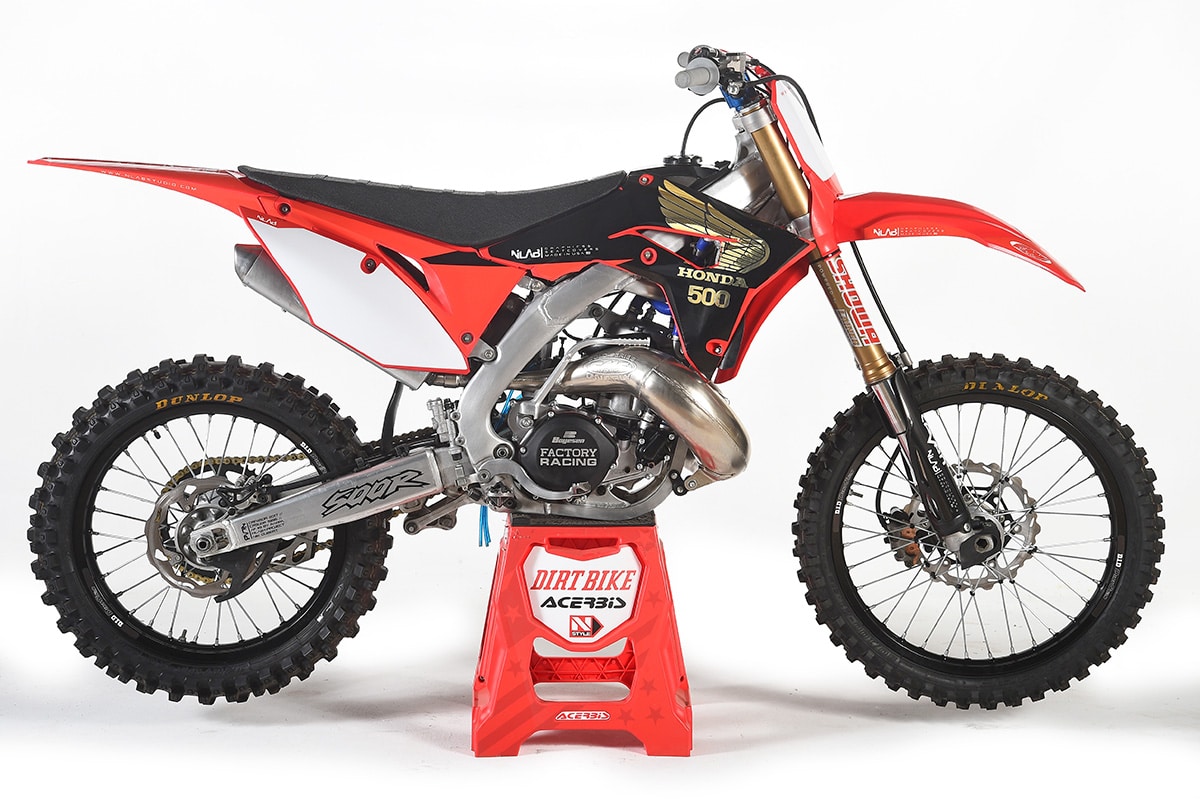 Once in a great while a very cool project gets dropped in our laps. This CR500 was built by Nic Gubert of the  graphics company NLab Studio Design. It has a very cool back story and will be featured in an upcoming Two-Stroke Tuesday, so keep an eye out. 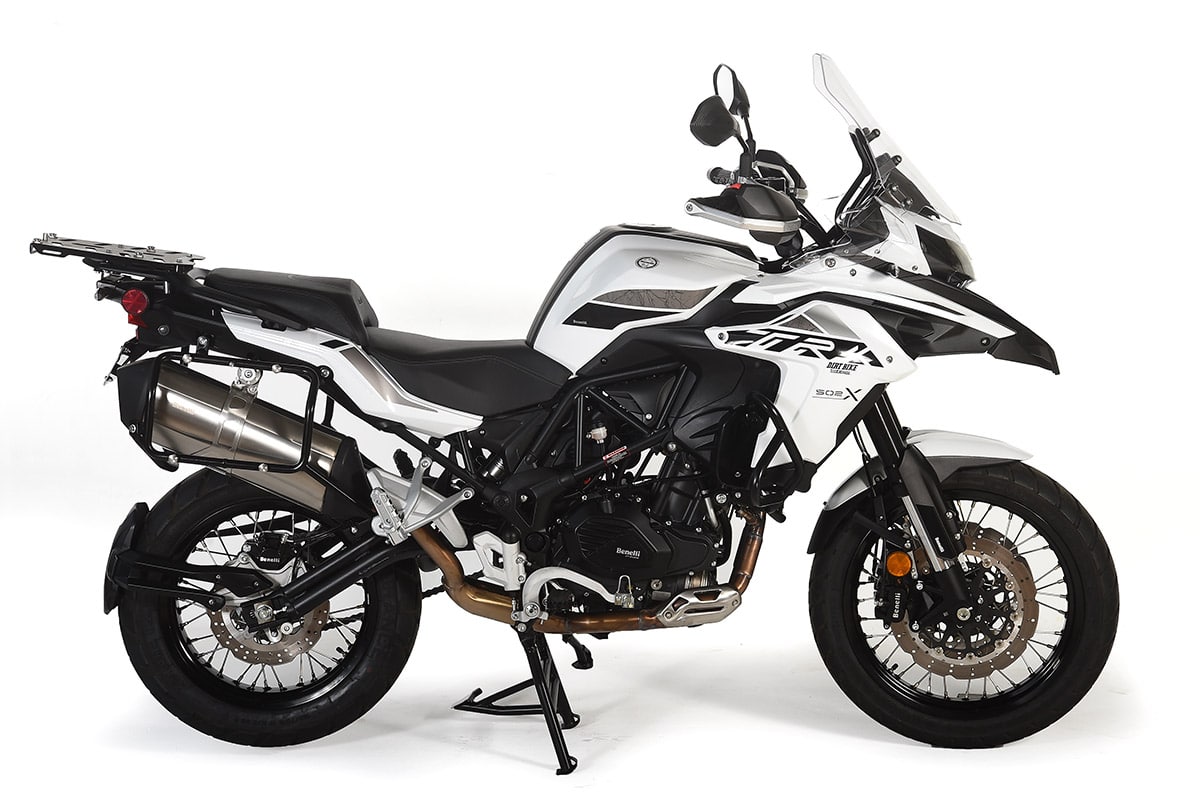 We just picked up a Benelli TRK502 adventure bike that we will be testing in upcoming weeks. If you’ve been around long enough, you remember Benelli. It was an Italian company famous for making incredibly fast minis. Now Benelli is back, imported under the SSR umbrella. What makes this bike interesting is the price. It sells for $6399.  The fit and finish are incredibly good for that, and so is the list of features. The motor is a twin-cylinder, fuel-injected 500 and we already know it’s surprisingly fast.

YOU CAN BE A HILLCLIMB CHAMPION 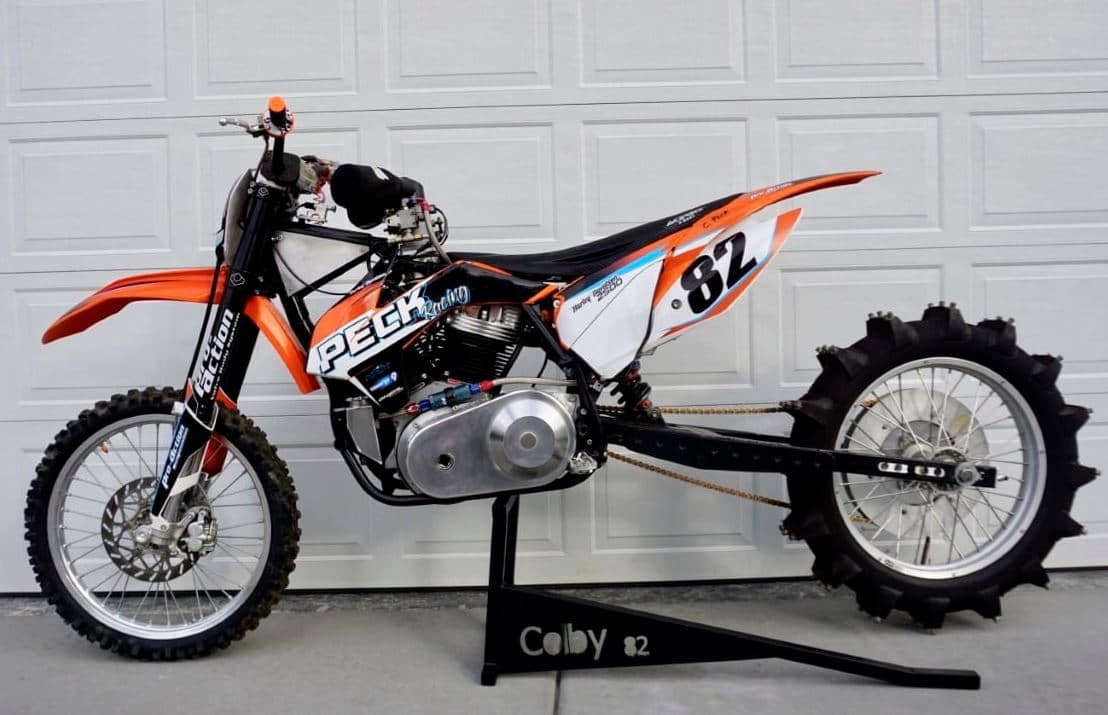 Ever feel like pointing a 200-horsepower Harley at a cliff and letter her rip?  Here’s your chance. This 1990 Harley climber has won a number of championships under Robie Peterson and others. Now, it’s going up for auction a Mecums Las Vegas. Check it out at the Mecum website. 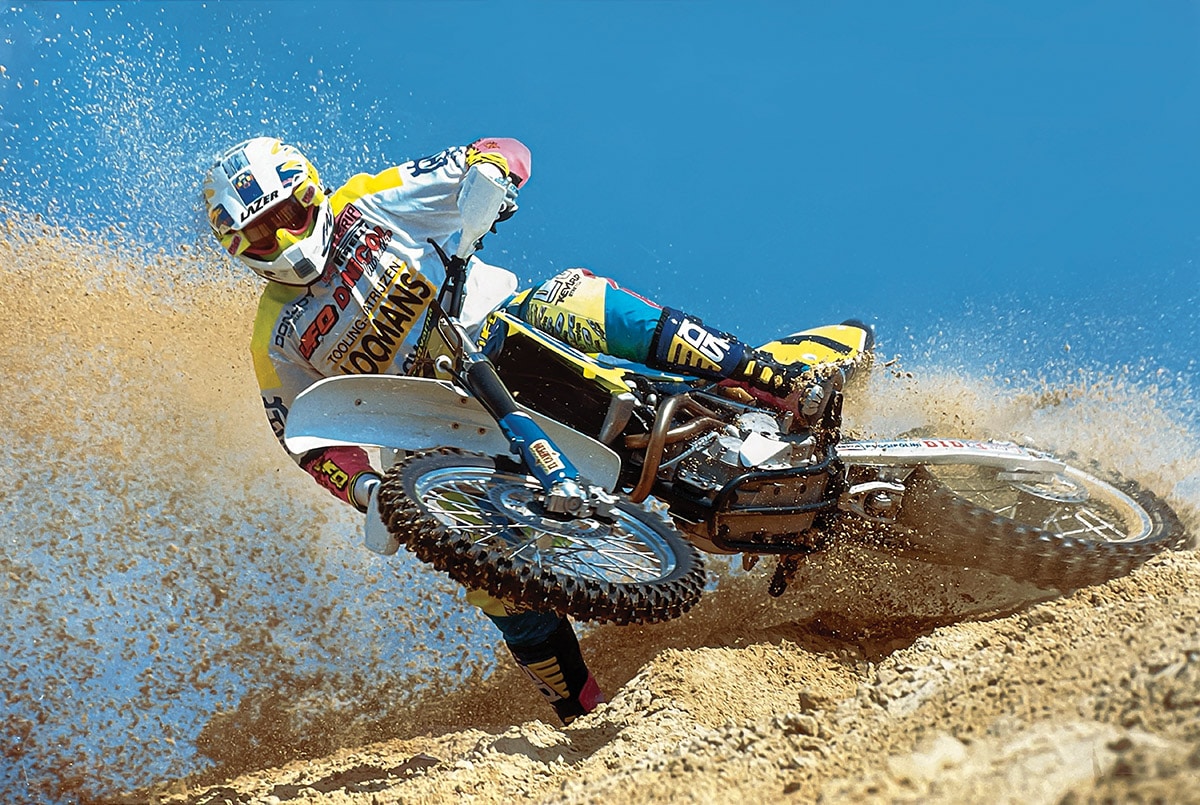 Back in 1993, Jacky Martens became the first rider of the modern era to win a World Championship MXGP on a four-stroke. At the time, Roger DeCoster was working for Dirt Bike, so he used the Belgian connection to score a ride on Jacky’s works Husky. He said it was the fastest works bike he had ever ridden. Roger wrote a story in the May 1993 issue of Dirt Bike, which will be reprinted in the July 2021 issue. Check it out!

SALT LAKE CITY SUPERCROSS 1 RESULTS: WEBB WILL HAVE TO WAIT