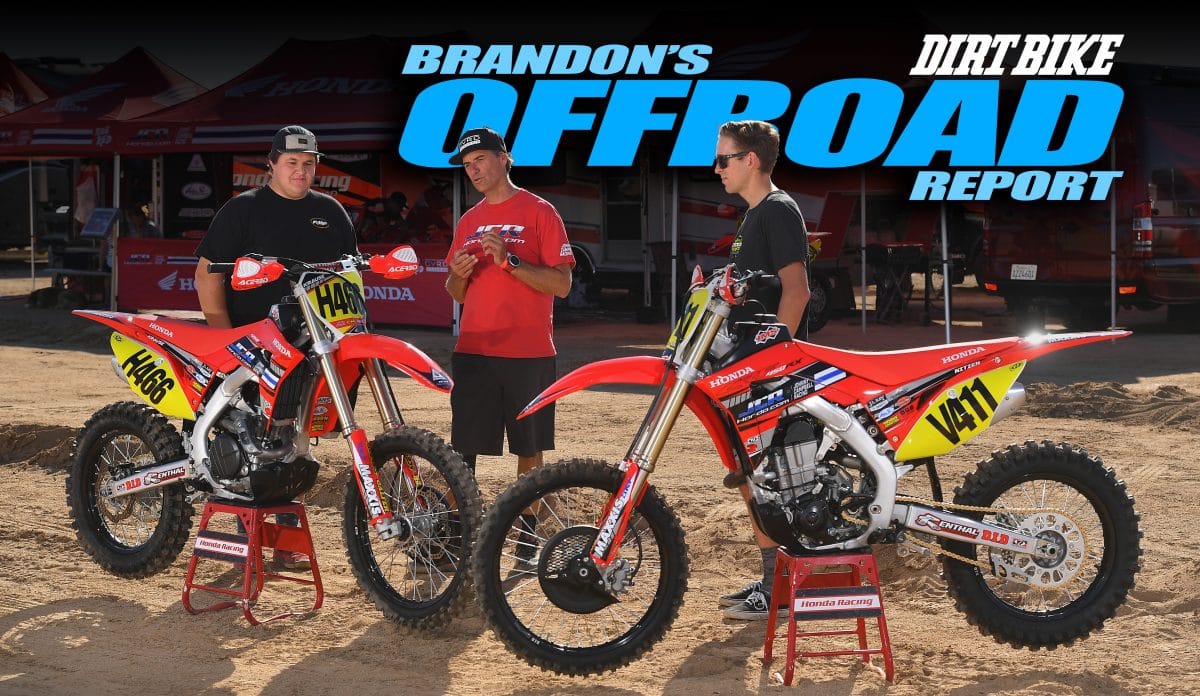 For most of the manufacturers, the bike introductions usually consist of heading out to a track or some sort of facility, them explaining what’s new and better about their machines or what was good enough about last year’s model that it remained unchanged, and then eventually we get a chance to ride the bike. Some of the time we just get the bike for ourselves to go out and ride for our first impressions. For the 2020 Honda CRF450RX, Honda decided all of that wasn’t enough. Instead, they invited us out to the sixth round of the 2019 AMA National Grand Prix Championship Series in Ridgecrest, California to not only test the bike for the first time, but to actually race it throughout the two-day weekend, with the guidance of long-time Honda racer Johnny Campbell and his JCR Honda off-road team.

In order to be able to race the stock 450RX in the fast-paced, desert setting of the Ridgecrest GP, Honda decided to make a few changes to what comes standard on the bike, but nothing major. For starters, they replaced the stock 2.2 gallon fuel tank with an IMS products 2.4 gallon tank, which would ensure we were able to make it at least an hour on a tank of gas. The JCR Honda team said the bike was capable of going the hour on the stock tank, but they didn’t want us to worry about running out just in case.

Another one of the changes was putting a one-tooth-bigger countershaft sprocket on the bike, going from the stock 13-tooth to a 14-tooth sprocket. The stock tubes were also replaced with heavy duty tubes to deter chances of getting a flat. Unfortunately, they didn’t last very long as both I and the DirtBikeTest rider in attendance got flats before the weekend was over. Luckily for us, JCR pitched in a rear mousse tube to prevent another flat. Other than both of those additions to the bike, Acerbis handguards were attached to the handlebars to protect from roost and some pesky stakes, as well as the removal of the kickstand to prevent it from unfolding during the race.

All “modifications” aside, I was still able to get a really good feel for the stock bike. Having only very minimal Honda experience in the past, I wanted to get as accustomed to the bike as possible before putting it through its paces during the hour and a half pro race, so I messed around with a lot of the settings the 450RX has to offer during the unclassified race in the morning. Like its motocross counterpart, the off-road model hosts three “Honda SELECTABLE TORQUE CONTROL” (HSTC) settings, which is basically traction control for your dirt bike, and three different preset maps for the rider to choose from, standard, mild and aggressive, which gives the bike all sorts of possibilities of riding conditions to take on. After messing around with all of the different combinations and discussing with the rest of the Honda crew at the race, I went with the stock mapping and HSTC setting two. The stock mapping already has very good hit off the bottom that continues smoothly the rest of the way through the powerband, plus the addition of the second HSTC setting smoothed it out just enough for some of the overwatered and slower sections of the course. The mild map was clearly too little for how fast the course was and the aggressive map had really good hit, but would lose all of its force on top, so that’s why I rode with the “standard” map.

It’s no secret that I’m a bigger dude, easily outside of the specs used to set up the stock suspension settings. With that being said, I didn’t change a single clicker all weekend. No added compression, no rebound. I just ran the bike as is. Now, I guess the Honda guys could’ve done something in fear that this big boy was going to break something, but they wouldn’t do that (right?).  We did setup the sag as close as possible for me, ending up with around 118mm of sag since the spring rate is a little bit lower than what I would normally run. Even though the suspension was stock, I didn’t have a single problem with it throughout the whole race. There was one time I bottomed out the forks pretty good, but that was just me “testing” (<–As a millennial, that’s where I would’ve included the face-palm emoji).

Although the setting for this bike intro was a bit atypical from what we’re used to, it was a very beneficial experience getting to test the bike in racing conditions. Some days, when your only intention is to go out and figure out what a bike does, it’s can be hard to discern if the bike really is missing something or if you just mentally put it there. With the race setting, it was easy to figure out exactly what the bike did as you went along. The weekend was also a very cool experience getting to hangout with the Honda guys, the JCR Honda team, as well as getting a nice history lesson from the man himself, Johnny Campbell. For more information on the 2020 Honda CRF450RX, check out https://powersports.honda.com/off-road/competition/crf450rx for details and be sure to lookout for future tests of the bike here.

Final Round of the National Hare and Hound Series

Since January, racers have been tackling the 2019 AMA National Hare and Hound Championship in hopes of taking home the coveted title. After eight round of racing, it all comes down to the ninth and final round of racing this weekend out in Lucerne Valley, Ca, as Jacob Argubright looks to claim his first NHHA title of his career. Argubright has been having the best year of racing I think he’s ever had, with the success he’s had in the hare and hounds, winning four so far this year, plus soloing the Mint 400 to almost a victory against Ricky Brabec and Kendall Norman, qualifying for his first International Six Days Enduro and many more accomplishments that he’s sure to be proud to be adding to his resume. He has a ten point lead coming into the final round of the series, so he’ll need to finish on the podium if his championship rival is able to win the race. 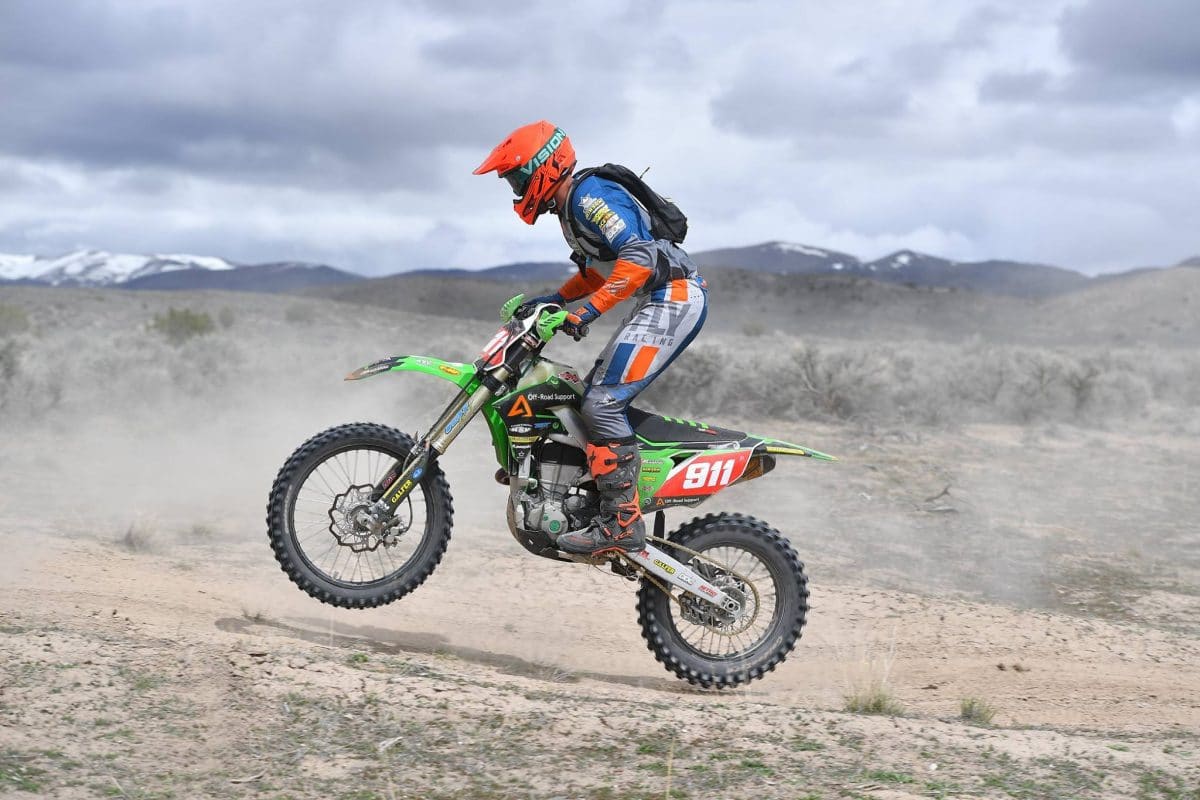 Factory Beta USA’s Joe Wasson currently sits second in the point standings heading into the championship deciding round. Taking three round victories of his own this season, Wasson has put himself in a good position to be able to take home the championship for himself once the weekend is over. He has also had plenty of success at the AMA Western Hare Scrambles series, currently sitting second over there as well. The past NHHA Pro 250 champion has the tougher fight going into the race tomorrow, but nothing is set in stone yet. 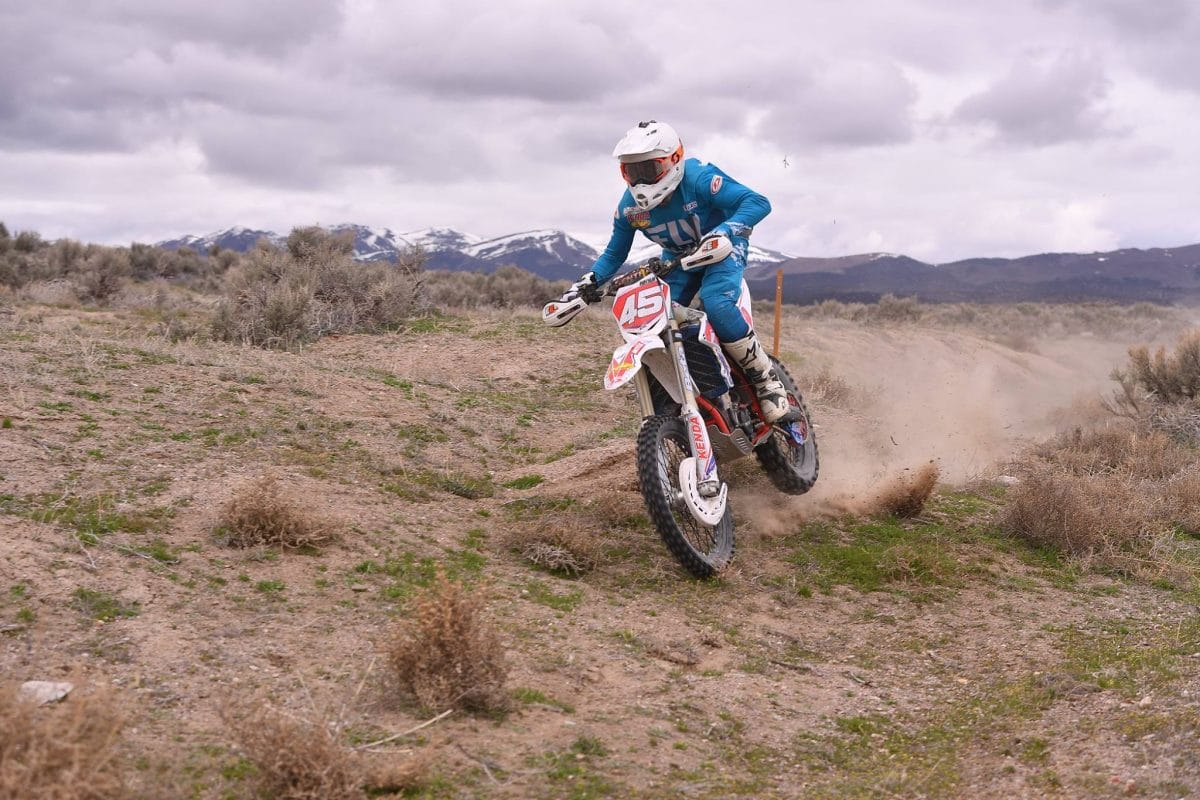 Reigning champion Kendall Norman and two-time champ Ricky Brabec both started out the year contending for another Hare and Hound championship to add to their mantels, but injuries for both parties took them out of the race before the series was half over. That, and needing to focus on the World Rallies were what kept the two from making a real push for the 2019 title.

In the 250 Pro category, Daemon Woolslayer is currently at the helm with a 20-point gap over his championship rivals Zane Roberts, who led much of the series until back-to-back races filled with bad luck, and JCR Honda’s Preston Campbell. As for Woolslayer, he basically just needs to finish the race tomorrow in order to clinch the title.

The fight for the 2019 Pro Women championship is still going strong going into round nine of the NHHA, as well, led by reigning champion Brandy Richards. Other than missing round three, Richards has dominated the women’s class, winning every other round so far. In fact, if it wasn’t for that missing race, mathematically she would’ve wrapped up the championship already. Albeit, she doesn’t have it too easy, though, as Factory Beta’s Morgan Tanke sits only 21 points behind her in second, able to take advantage if problems strike Brandy.

Does that name sound a bit unfamiliar? That’s because round 12 of the 2019 GNCC series is head to an all new location for the penultimate round. For all of you Boy Scouts out there, this is actually just one of four facilities in the world managed by the Boy Scouts of America, hosting the annual National Scout Jamboree and for 2019 the World Scout Jamboree. The 14,000 acres of the Bechtel Reserve have never seen any kind of motorcycling racing yet before, which means everybody comes into the event with equal experience at the location, making for some great racing! 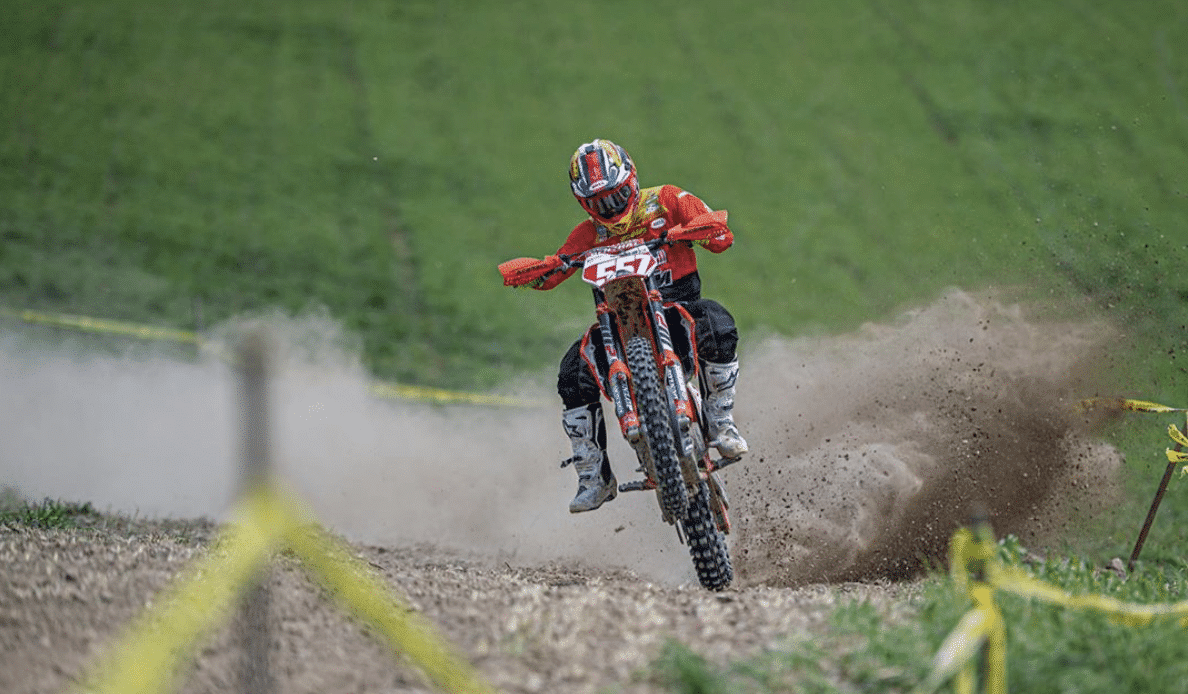 Kailub Russell comes into the 12th round of the series with a 37-point lead over Rockstar Energy/Husqvarna rider Thad Duvall, leaving the championship open until at least after this weekend. Unfortunately for Duvall, though, injury struck his way again, as he announced that on Tuesday this last week he fractured his leg, tearing his ACL and MCL along with it. Due to this, as long as Thad doesn’t line up and score points, Kailub mathematically has already clinched the championship since there is a nearly 100-point gap between him and third, making it his seventh consecutive GNCC title. Kailub already holds the most consecutive titles with six, but is still a few short of Ed Lojak’s nine total championships. 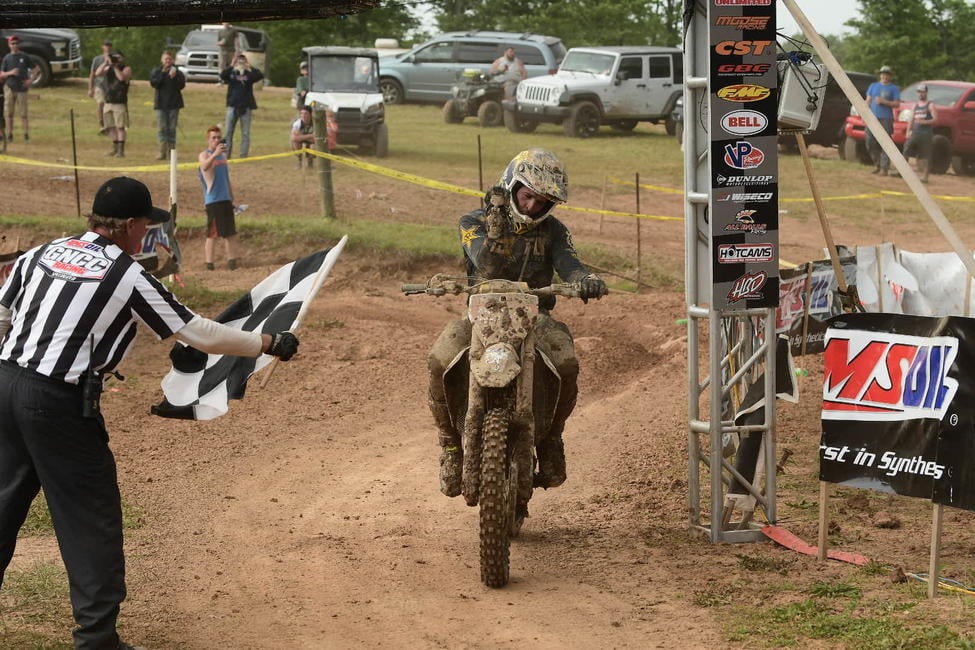 As for the XC2 class, the championship was already wrapped up by now-two time consecutive champion Ben Kelley, winning ten of the ten rounds he raced as an XC2 rider this year. After a few years in the smaller bore class, Kelley moved himself up to the XC1 class at the last round in preparation for next year, finishing eighth in the stacked field of riders and after some bike problems. With his successes at the past Snowshoe GNCC rounds, you can bet Kelley is more than capable of running up front with the rest of the XC1 boys.

In the XC3 division, Trail Jester/KTM’s Jesse Ansley continues to lead the 125 class. Now with a 54-point lead over Beta USA’s Cody Barnes, he’ll be able to to clinch the championship this weekend as long as everything goes his way. If Cody takes the win tomorrow, Jesse will have to finish 16th or better to take home the championship.

The points battle is a bit tighter in the WXC class compared to the other three classes above, as Becca Sheets and Tayla Jones are split by a 37-point gap coming into the Bechtel Reserve GNCC. Although it’s a much smaller point deficit, Sheets is still able to wrap up her championship after the day is over tomorrow if she remains more than 30-points ahead of Jones. 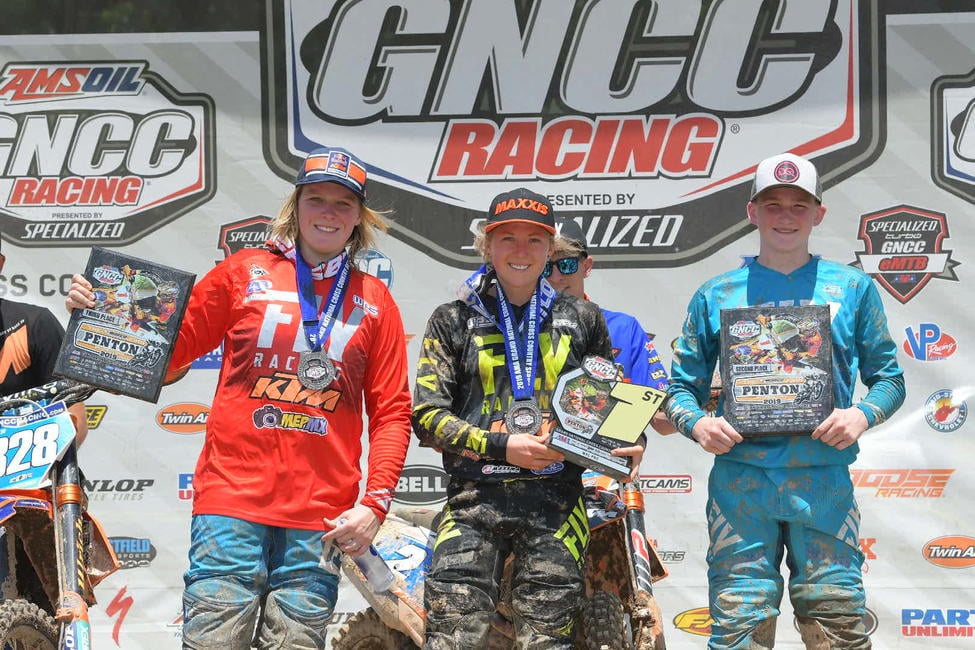 That’s all the news I have for this week’s offroad report. Be sure to check back next week as we take a look into Taylor Robert’s KTM 450 XC-F, as well as that weekend’s offroad events going on around the world.

A LOOK AT THE TEAM RED BULL KTM RACE BIKES FOR 2020: THE WRAP