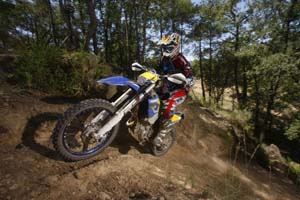 Share FacebookTwitterGoogle+ReddItWhatsAppPinterestEmail
For the first time in its short- but-impressive history, Husaberg now offers what can be called a full line of enduro motorcycles. That’s not to be confused with a full line of motorcycles—there are no dual-sport bikes, MX bikes or Supermoto bikes, just enduro bikes. There are two bikes for most off-road classes, two-stroke and-stroke.
As you might expect, all the bikes have counterparts in the KTM line, as the two companies have been one and the same since 1998. But these aren’t rebadged clones like Chevy and GMC. The Husaberg line has its own distinct personality. We got a chance to ride all the new bikes at a mass roll-out for the world media in Oliana, Spain. The common ground is that they are all no-compromise enduro bikes heavily oriented toward racing. Here are some brief impressions: