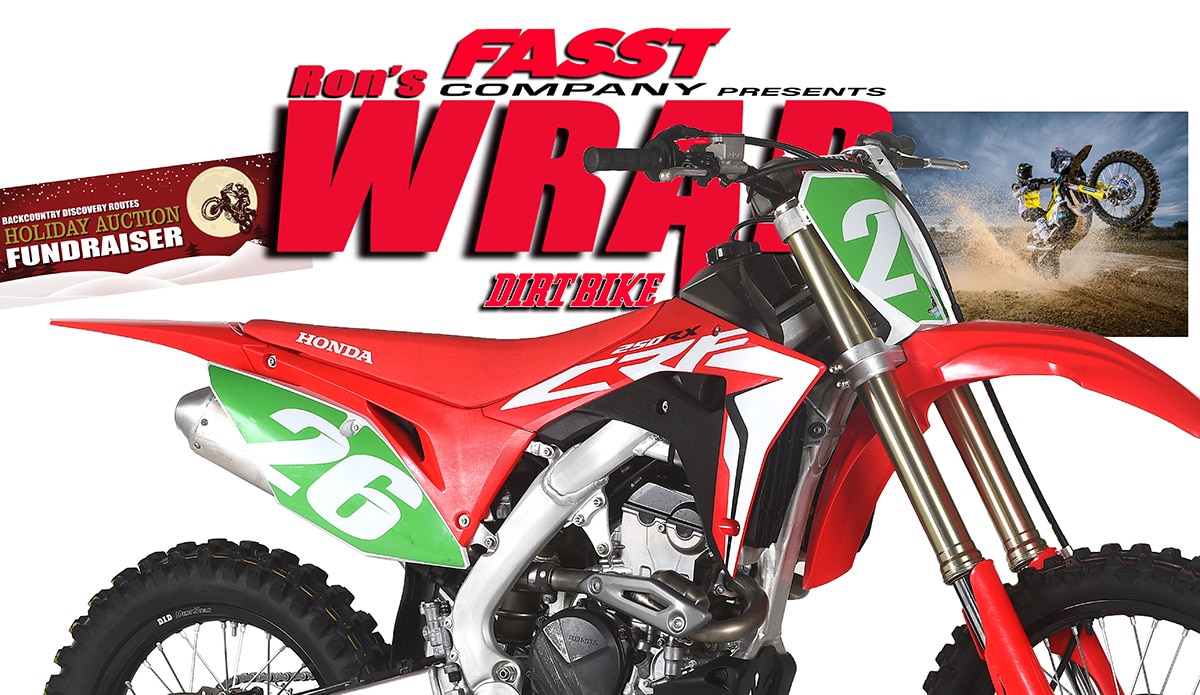 The CRF250RX off-road racer has just arrived and we have already spent a couple of days riding its wheels off. Honda is showing a level of interest and commitment in American off-road riders that we haven’t seen in a very long time. The new 250 joins the CRF450RX in a growing category we call closed-course competition off-road bikes.

When Honda or anyone else imports a motorcycle, it must fall into one of three different categories. It has to be a street bike, an off-road bike or a closed-course competition bike. Street bikes (including dual-sport bikes) have to meet fairly strict noise and emission requirements. The homologation process is expensive and the standards are difficult to meet. Off-road bikes face slightly more relaxed standards, but the process is just as bureaucratic and expensive. Only closed-course competition bikes are excused from all this. Until recently, this classification was mainly for motocross bikes. Now, more and more motorcycle makers are blurring the lines between MX bikes and off-roaders.

In order to create the CRF250RX, Honda engineers didn’t have to log too much overtime. Most of the work was done last year when the CRF250R motocross bike was redesigned from scratch. We often hear a bike is “all-new” when in fact there are only a dozen or so changes to an existing bike. But, in the case of Honda’s 2018 250 motocrosser, it was completely and totally different from the previous CRF250R. The motor got electric start and a double-overhead cam design with finger followers between the cams and valves. The aluminum frame was designed to direct the engine’s intake over the top shock mount, and the suspension was reconfigured with a coil-spring fork.
The conversion to an off-road bike followed a simple formula. The bike got seven key features:

What it didn’t get is significant, too. There’s no change in the transmission ratios or final gearing. There’s no headlight, taillight or odometer. There’s no spark arrestor, no handguards and the twin mufflers are identical to those of the motocross bike. This is a purebred race bike.

The previous SOHC Honda was the low-end torque king of the 250 class in 2017. When the new bike arrived, all that was gone. The new motor was a screamer with everything on top and nothing down low. You wouldn’t think that would be a good recipe for off-road, but it kinda works. Like the motocross version, there’s a handlebar mounted which that allows you to choose between three different power deliveries: standard is position one, mild is two and aggressive is three. When the RX is in position three, it’s virtually identical to the motocross bike in position one. The RX’s other settings are tailored specifically for off-road riding, and while neither of them gives the bike more torque, they do change the nature of the bike’s “hit.”  In standard mode, the bike is crazy smooth down low.

That’s the nature of a modern 250 four-stroke anyway; they find traction and they’re easy to manage. The Honda’s mediocre output at low rpm make it the all-time traction king. On level ground, there’s no downside to that kind of power. Of course, off-road riding is usually defined by a distinct shortage of level ground. That’s where the clutch comes in. When you come around a blind corner and find a sudden embankment to climb, the Honda can be brought to life, but you have to think quick. The motor is crazy powerful on top, but you have gain something like 8000 rpm in a split second to go from lazy fun mode all the way up to full rage. The Honda can do it. We don’t know of many other 250 four-strokes that free-rev so quickly. When you pull in the clutch and twist the throttle, the motor comes to life now. Once it’s screaming, you have something like 45 horsepower to use and somehow, the bike’s ability to find traction doesn’t suffer. That makes for a split personality. The sleepy low-end power gives it a sweet, gentle personality at a casual pace. The wicked top end power makes it a vicious racer. The trick is learning to make the two bikes coexist. If you aren’t ready with the clutch, the throttle and the shifter, you can’t fall back on torque. There just ain’t none. You have to learn to change modes quickly; the bike can do it if you can. 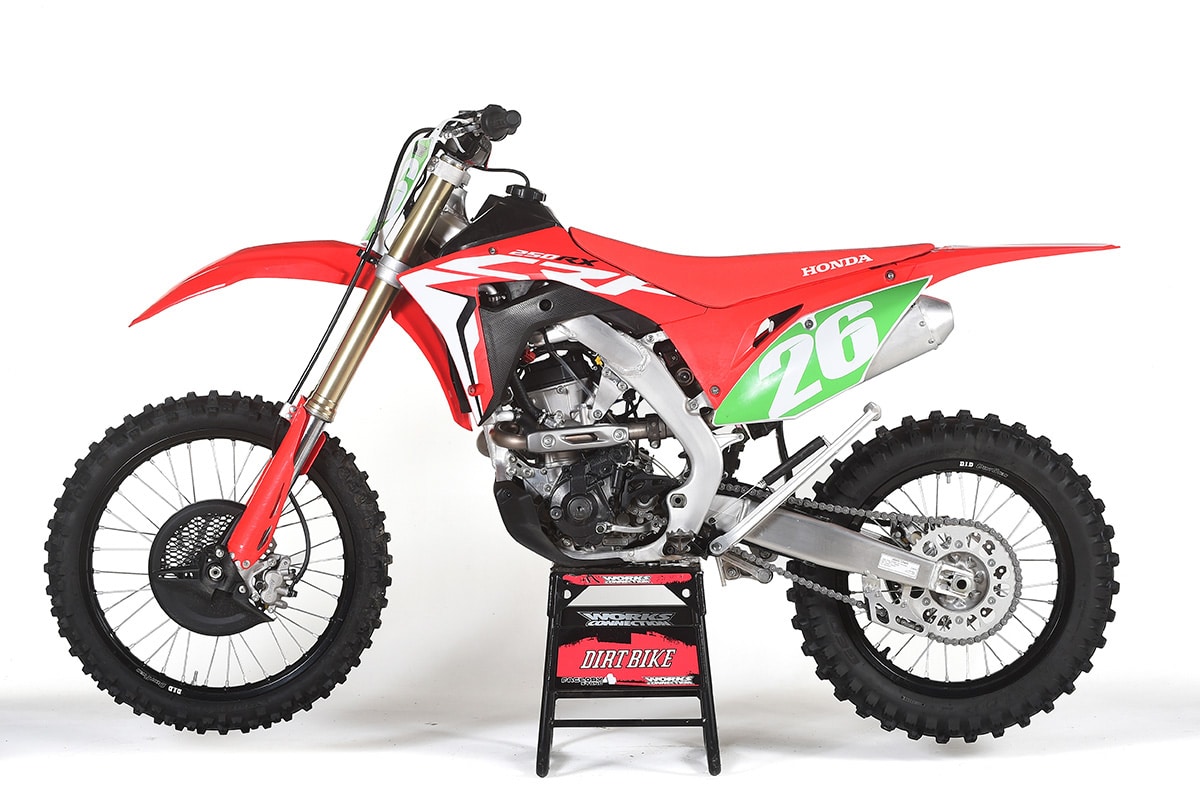 As for the suspension, we love it. This is a plush motorcycle, but it still doesn’t dive excessively or bottom. Like the motocross bike, the RX is universally loved for its combination of stability and effortless cornering. It’s a large bike with a spread-out rider compartment. Almost all riders feel comfortable on it. It’s not an especially light bike, though. Without fuel, it weighs 235 pounds on the magnificent Dirt Bike scale. That’s about 8 pounds heavier than the motocross version, but most riders say the difference seems like more.  Some of the feeling of massiveness comes from the fuel tank, which looks big, but never interferes with riding. Having said that, it’s still a light bike by off-road standards. With any off-road 250 four-stroke, the real test will come when it faces a 250 two-stroke. Off-road racing is the one arena where two-strokes still have an upper hand.  At this point, we still haven’t put the Honda against any other bikes, but that’s coming. For now, the single bike test of the Honda will be in the March 2019 print issue of Dirt Bike.

ALDON BAKER AND THE LITPRO GUYS

I can be pretty geeky about tech stuff like GPS and training aides. The LITPro guys are taking this to another level. This is the first in a series of videos with Aldon Baker about how to us their device in cooperation with a heart rate monitor. Pretty cool. 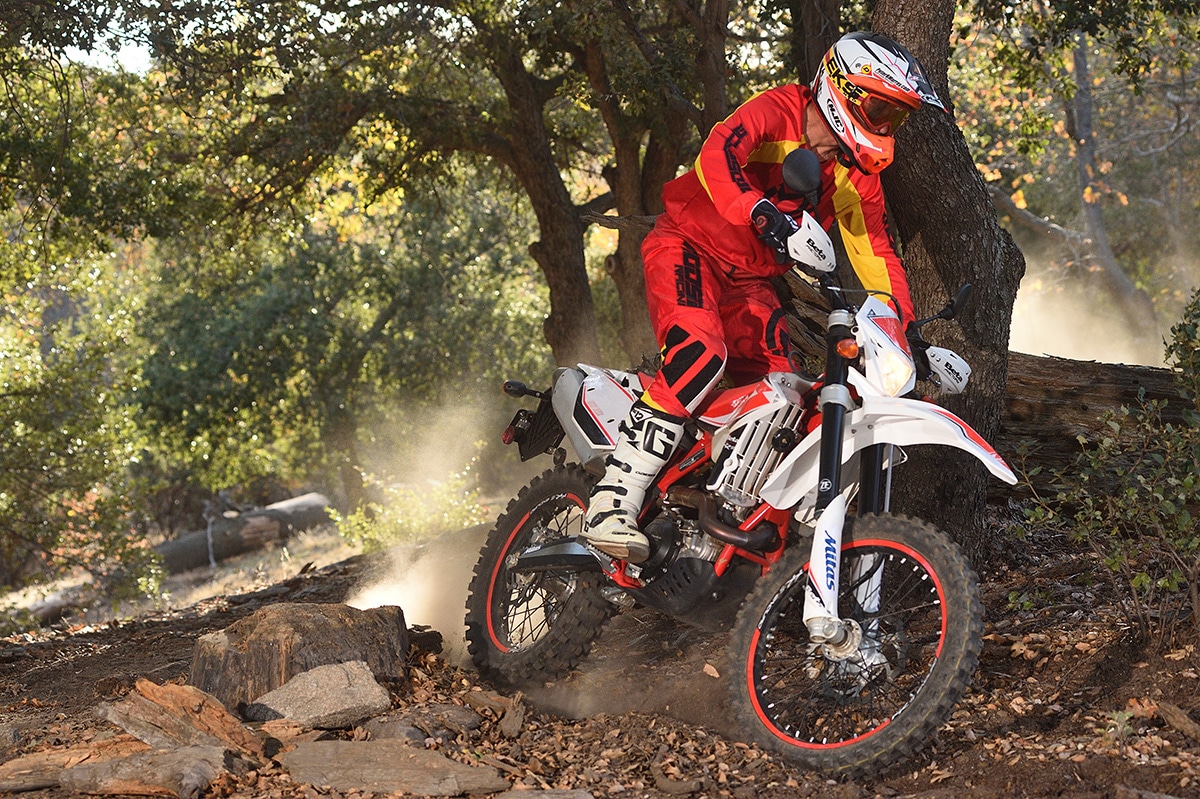 Beta let us know there are a few spots available at the next stop on the company’s demo tour, so if you have always wanted to experience the ride on a Beta, get out your gear and come join them for some good times.
Location:
Dacono, Colorado
IMI Motorsports Complex
Date:
Saturday, December 15th.
Click here to go to Beta’s website for more information.

Backcountry Discovery Routes is a nonprofit organization that maps out incredible adventure rides for motorcyclists all over the country. Each year, they auction off vacations and goods to help the cause. The BDR Holiday Auction features unique BDR experiences and ADV-moto-inspired packages you can’t get anywhere else.

Get your friends involved, head over to the BDR Holiday Auction Site, bid often and bid high to support the BDR cause! 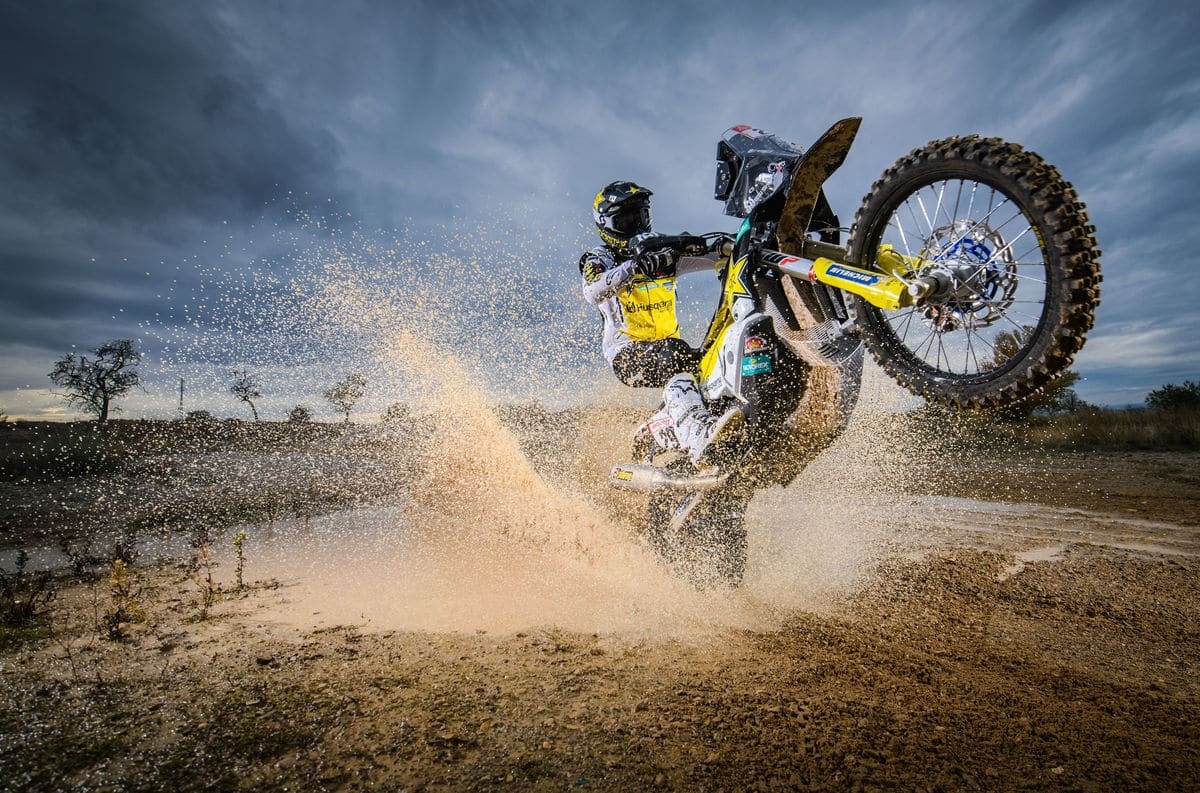 Andrew Short is getting ready for Dakar, where he will join his Rockstar Husqvarna teammate Pablo Quintanella. has gained valuable knowledge during his first full year of rally competition and is fired up for success in what will be his second participation in the Dakar Rally. Looking to make use of the experience he’s acquired, the American will be eyeing a good overall result in Peru in January.

Kicking off on January 6 in Lima, the 2019 edition of the Dakar Rally features a giant rally route entirely within Peru. With 10 demanding rally stages and approximately 70% being sandy dunes, the event is widely expected to be tough on all competitors.

Andrew Short: “I’ve learned a lot during the 2018 season and now I’m ready to put this experience to good use at the Dakar. The season started for me in Morocco with the Merzouga Rally and since then we’ve also raced in Chile and Peru. I had some good race time and was able to study the strategy of the top guys. I saw how fast they can go in specific sections and kept improving my speed while navigating correctly. In Peru, I was able to battle with them all the way to the finish and I was happy to get my first podium in rally racing. It gives me extra confidence knowing that the 2019 Dakar will take place in Peru. I am looking forward to going back racing in the massive Peruvian dunes. My goal for the coming Dakar is not on a number or place, it’s just to continue to race with the top guys. I want to be even more competitive in January and be as close as possible to the front.” 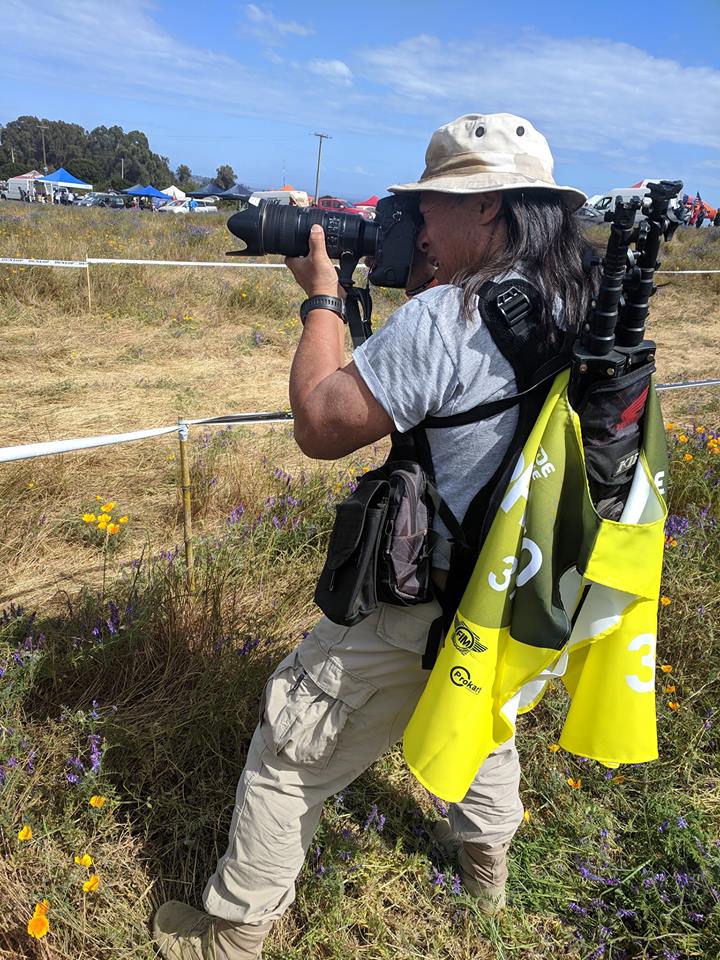 The America motorcyclist Association presented its annual awards last week. One of the  most deserving was Mark Kariya, who won the AMA Media award. He just returned from the ISDE in Chile.