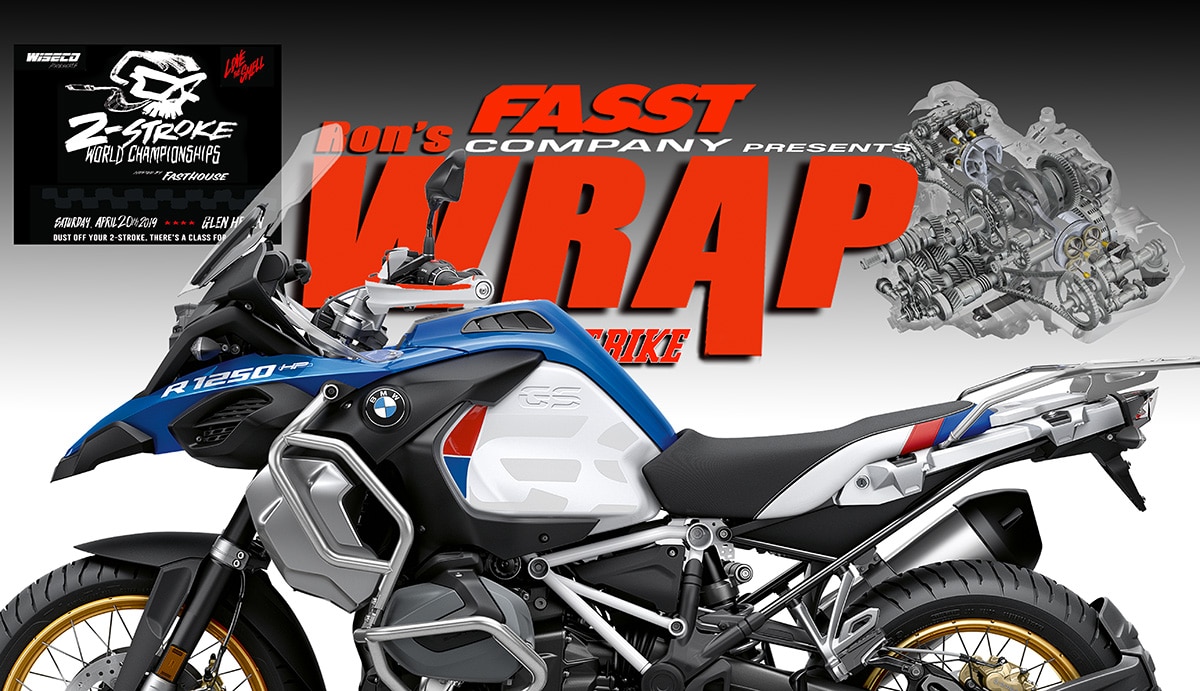 The new BMW R1250GSA has dominated the week at Dirt Bike. This is the heir to the BMW legacy of adventure bikes that goes back to the ’80s. BMW hosted a press intro for the R1250GS, the R1250GS Adventure and the R1250RT in Palm Springs last week and then I got to ride away on the GSA. While I was there, I did get to spend a good deal of time on the standard R1250GS, too. Just in case you don’t know your BMW models, the R means it’s a Boxer (longitudinal crankshaft, horizontal twin), the GS means it has some dirt capability, and the “A” suffix means it has a larger fuel tank and more accessories. The RT suffix means it’s a sport touring bike, with no dirt orientation. 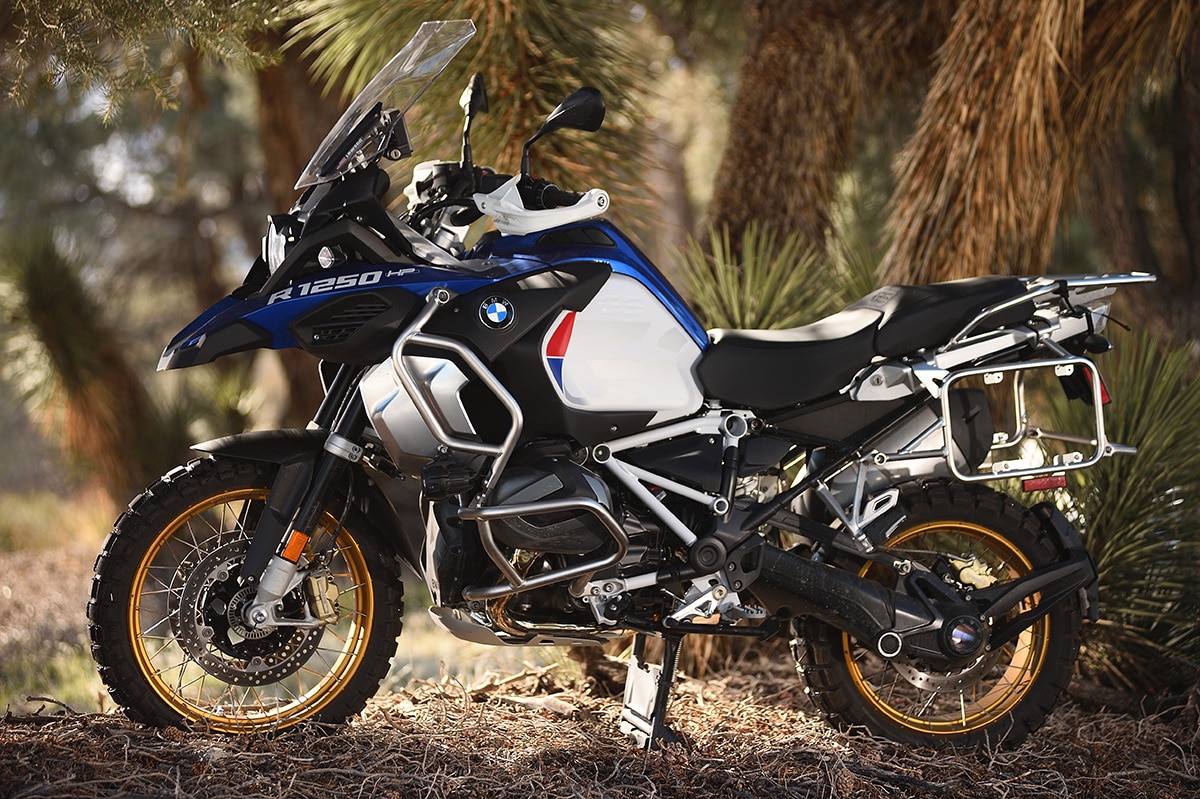 This year the bike gets a new name and new technology. The BMW R1200GS has morphed into the BMW R1250GS and increases from 1170cc to 1254cc. More importantly it incorporates a new twist on valve train design called “ShiftCam.” The motor is new from the base gaskets out. The surrounding motorcycle, however, is the classic GS that has come to represent adventure bikes as a whole. 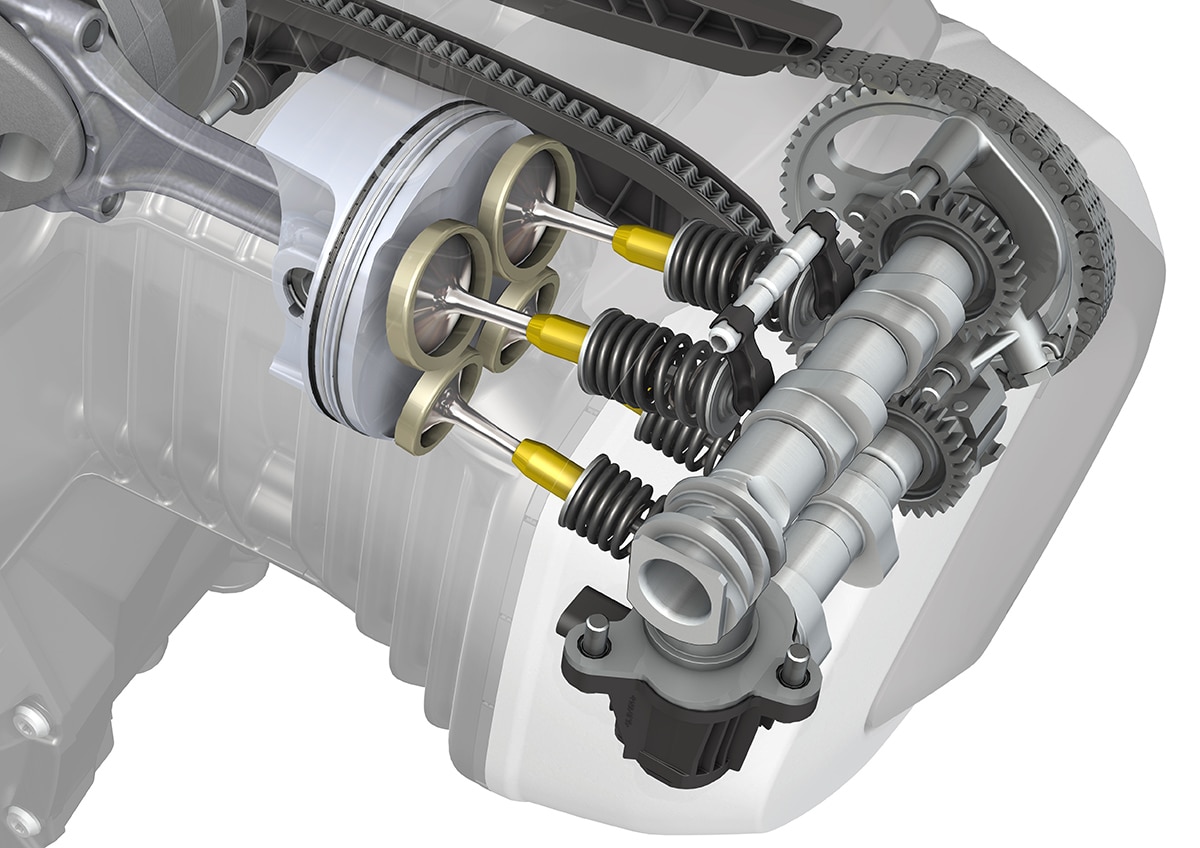 BMW’s ShiftCam design isn’t just variable cam timing. The intake side of the motor actually has two different cam profiles for each valve. The mild cam, which the engineers call the partial load cam, has less lift and shorter duration, and lifts the two intake valve asymmetrically. By opening one valve before the other, the combustion chamber is filled more efficiently, they say. At some point, as determined by a combination of engine rpm, load and throttle position, the camshaft shifts and more aggressive lobes come into play. It’s like a more sophisticated version of a two-stroke powervalve.

The goal is more power, but BMW claims there are benefits in emissions and fuel efficiency. The official horsepower rating for the 1200 was 125 hp with 95 foot-pounds of torque. The 1250 is rated at 136 horsepower and 105 foot-pounds. The rest of the motor is mostly the same as it’s been since 2013. That when it was redesigned from top to bottom and became liquid-cooled. It’s still a Boxer twin with a driveshaft–those are essential parts of the BMW “R” formula.

In case you’ve never ridden one of the big BMWs in the dirt, it’s not quite like anything else. All adventure bikes are big, but the BMW gives you the impression that it’s really, really big. The horizontal cylinders are a part of this, but you don’t really notice that unless you put your feet down. You kind of settle into a cockpit area that makes it seem like you’re inside the bike. The “A” model is defined by a larger fuel tank (almost 8 gallons, as opposed to 5.3 on the standard model). That makes the bike look even bigger. But it actually works on dirt roads. It has the usual ride modes that have become almost universal among adventure bikes, but you have to plug in a dongle that allows Enduro Pro mode, which lets you get a little loose in the dirt. It’s fun! There’s massive protection on the A model which means you won’t break anything it up if you drop it at lower speeds. Only the valve cover gets scratched. Getting it upright might be a challenge. It weighs about 550 pounds if the tank is dry. That’s actually typical of big adventure bikes.

There are some things that are unlike any other bike. There’s the slight “twist” that you get when you blip the throttle. That’s the whole bike torquing around the crank. There’s also the complete lack of fork dive under braking. The Telelever front suspension prevents that. And there’s a very distinctive sound that’s like nothing else in the motorcycle world.

This year, there’s a noticeable increase in power. It already had tons, but now it can go toe-to-toe in a roll-on with anything else in the ADV world. If you already have a late model R1200, don’t worry. The rest of the bike seems pretty much the same. The price is still pretty substantial. The base price is $17,695 for the standard GS and the A model is $19,945. You won’t find many strippos in the U.S., though. BMW only imports the bike with option packages that push the price as much as $4000 higher. Look for a full test in the June print edition of Dirt Bike. 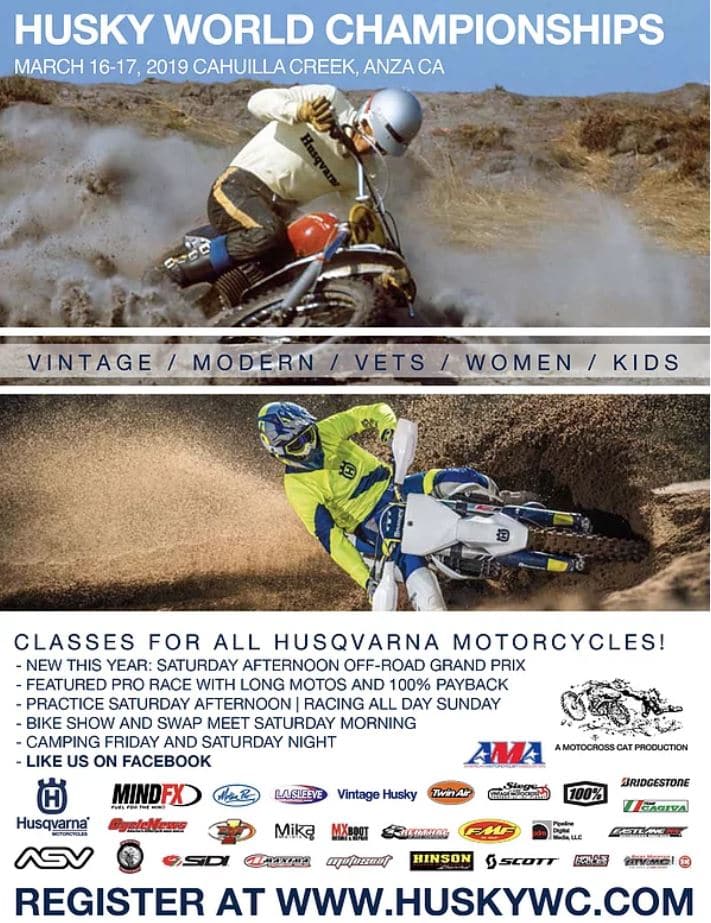 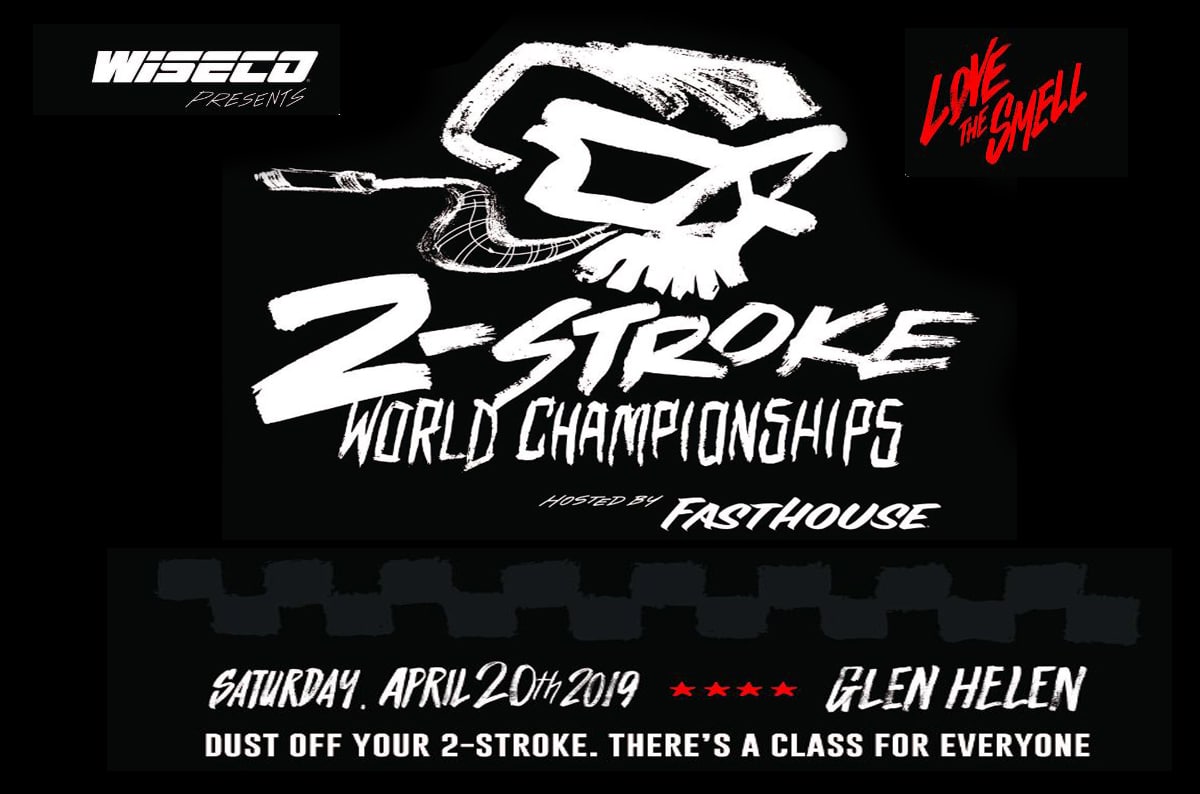 The Two–Stroke MX World Championship has been an inconic event at Glen Helen and provides the opportunity for riders to race their faithful two–stroke machines and mix it up with other premix loyalists. Wiseco is now the title sponsor of the event, taking over from MTA. The Wiseco Two–Stoke MX World Championship hosted by Fasthouse will take place Saturday, April 20 at Glen Helen Raceway in San Bernardino, Calif. The race will feature over 30 classes including Open Pro, 125cc Pro, 250cc Expert, 125cc Expert, 60+, 85cc, 65cc, 50cc and a women’s class. The event has grown every year and with Wiseco’s support for 2019 it should be the largest ever. For more information about the Wiseco Two-Stoke MX World Championships hosted by Fasthouse, log on to glenhelen.com.

The FIM MXGP season has taken a short break after getting started two weeks ago in Patagonia, Argentina, which might be the greatest MX track in the world.  In case you missed it, here’s the “Best Of” reel. The short form is that Jeff Herlings is out with a preseason injury and Antonio Cairoli went 1-1 to open the season. In the MX2 class, Jorge Prado did the same thing, making it a good day for KTM. Next week it starts up again in Great Britain.  The fifth round was scheduled to be held next month in Shanghai, China, but months of rainfall has made that impossible. The Chinese GP has been rescheduled for September 15. Get your visa now!

The 2019 FIM World Enduro GP season is about to begin. Last year, there was an odd schism between the European teams as to which series to ride: the traditional Enduro GPs or the newly formed World Enduro Super Series. Most teams supported both, but the Farioli KTM and the Rockstar Husqvarna teams abandoned the Enduro GPs and concentrated only on the Super Series. As a result, there are no Husky or KTM Champions. Contrary to what you might think, KTM traditionally struggled in that series against the smaller makes like TM, Beta and Sherco.  Beta’s Steve Holcombe is the E3 and overall Enduro GP champion. Eero Remes is the E2 champ. He earned that on a TM but is switching to Yamaha for 2019. Brad Freeman topped the E1 class on a Beta 125.
The 2019 season starts next week in Germany. It’s worth checking out.
March 22- 24 Germany
May 3-5 Portugal
May 10-12 Spain
June 14-16 Corsica
June 21-23 Italy
Sept 13-15  Czech Replublic
Sept 27-29 France.