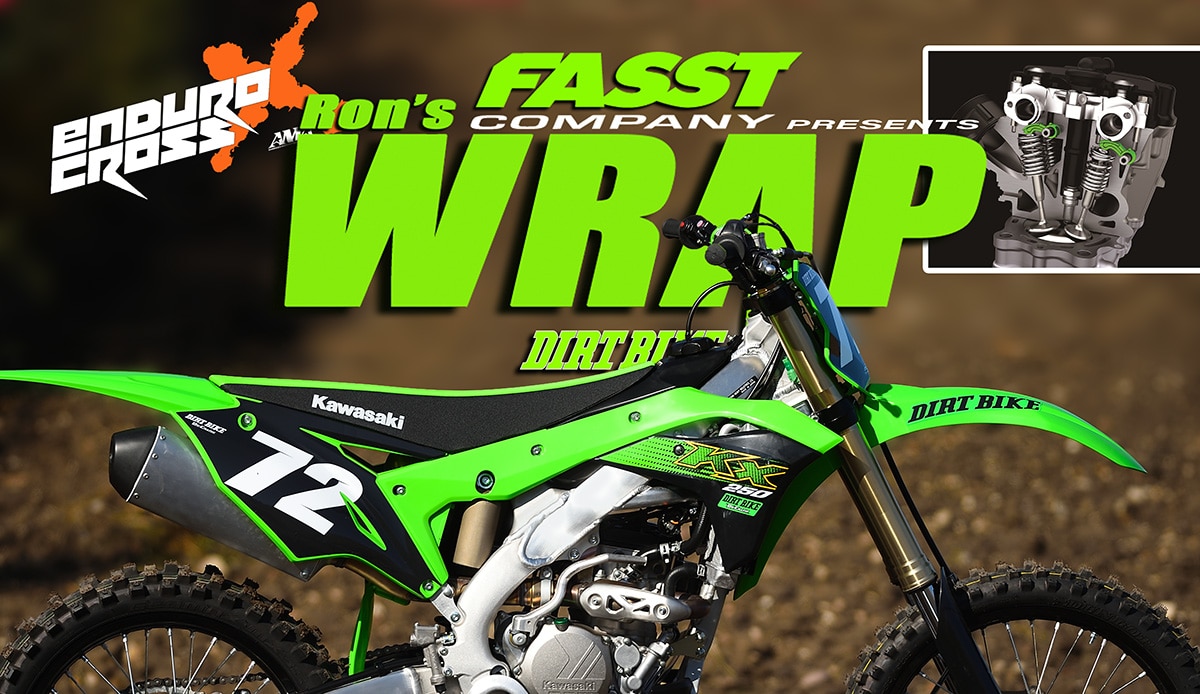 The 2020 Kawasaki KX250 is out and we have it in our greedy little hands. First, I want to congratulate Kawasaki on displaying corporate self restraint and discipline. Everyone expected a big redesign for this bike because it was overdue. The 2019 KX450 had a new chassis with an electric start motor and a hydraulic clutch, so it made sense that the 250 would get the same treatment, whether it needed it or not. Frankly it didn’t need it, and Kawasaki was smart enough to realize that. Electric start is a luxury that’s counterproductive where weight is critical. This is also a feeder class where price should be a factor. It was much smarter to concentrate on the bike’s weak points. That’s what Kawasaki did here.

Kawasaki says the bike comes in at the same weight as the 2019 model, and I’m sure that’s true. The only part that might add weight is the addition of a second fork spring. Last year it had the Showa Separate Function Fork which had only one spring. Now it has a KYB fork with one in each leg. The frame has only minor changes, but the reshaped engine mounts are most important because, as we are discovering, they can change the flex characteristics of the whole chassis. There are also changes in the brakes, the airbox and the muffler. All of these are very smart, economical changes. The one that required careful design work was the new valve configuration. 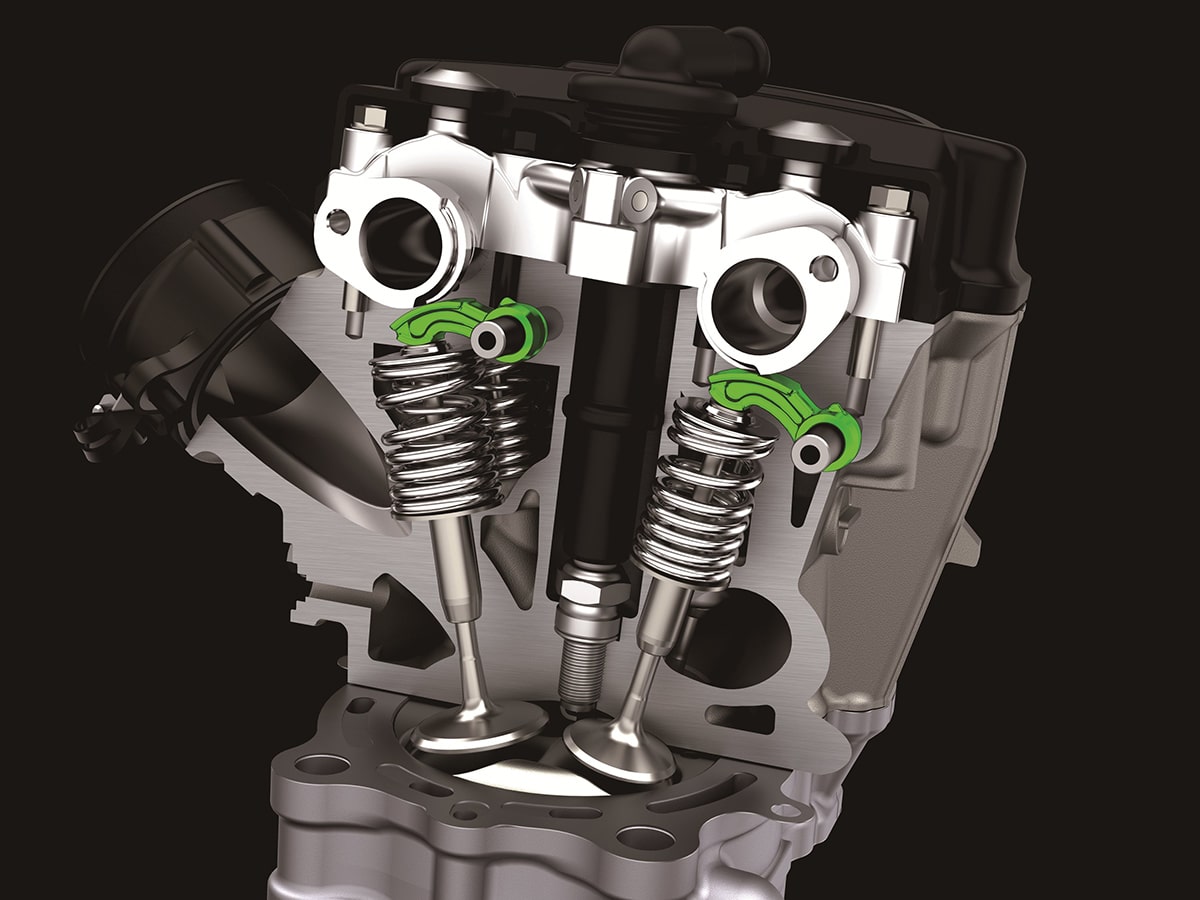 Kawasaki redesigned the top end of the motor to use finger followers between the cams and the valves. This allows for more aggressive tuning. Even there, Kawasaki was smart to use some existing parts. The followers themselves are straight out of a ZX10. The bore and stroke are also changed from 77.0 x 53.6mm to 78.0 x 52.2mm, meaning slightly more room for bigger valves. The air intake is larger and straighter and there are mapping changes feeding the 44mm Keihin throttle body. It still has a secondary injector in the air boot. The bottom line is that Kawasaki went looking for more power. That’s what the KX250 needed most.

This  was a wise, economical and successful strategy. Now, the KX is probably the fastest bike in the 250 class. It’s also inexpensive and one of the lightest.  The price is $7795 compared to $9099 for the KTM, and the weight will be about 222 without fuel. Does all that make up for no electric starter? I think so. As you might expect, the bike did lose some low-rpm power. In 2019, it had the most bottom end in the class, so it had some to lose. Now, it’s a little dead down low, but where the old bike was flattening out around 10,000 rpm, the new bike is really taking off. The rev ceiling isn’t any higher–it still signs off around 13,500 rpm, but now that seems low, simply because the bike is still getting better and better right up to that point–then it just stops. 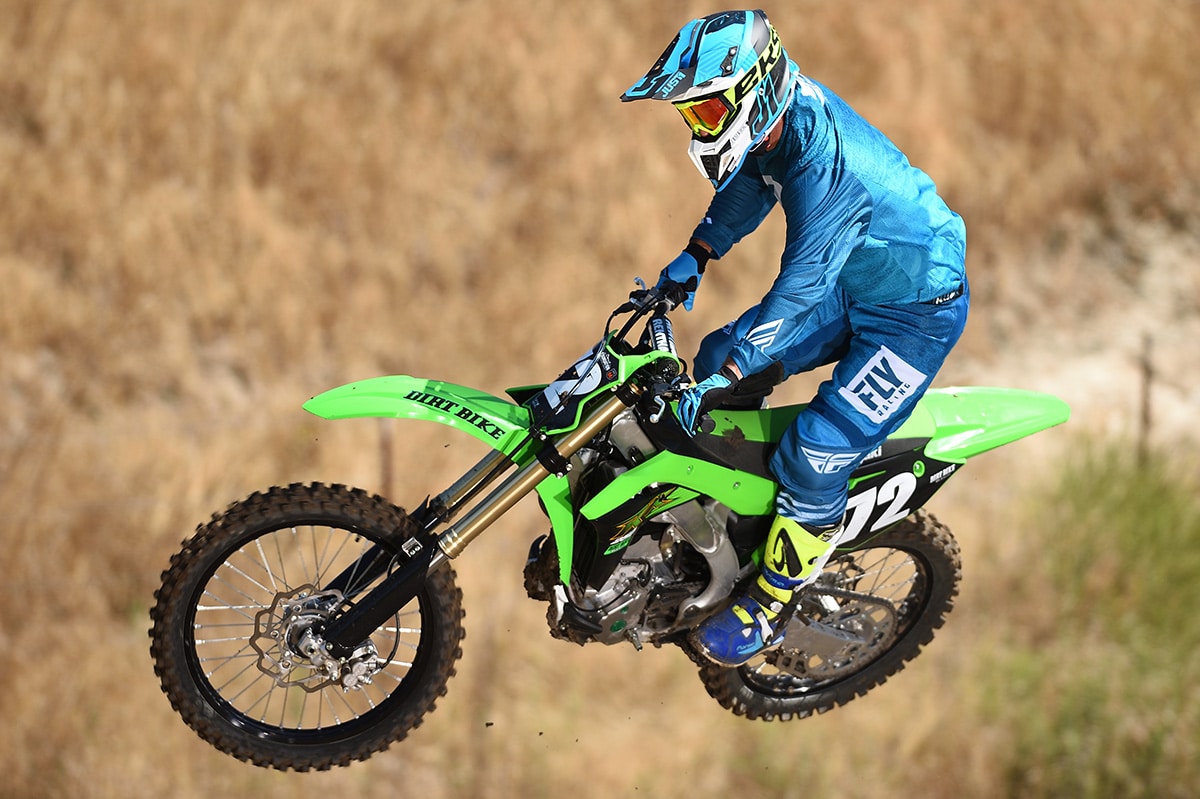 This type of powerband is more in-line with what KTM, Husqvarna and Honda are doing in the 250 class. Everyone is moving to more peak power at the expense of torque. Yamaha did the same thing to a lesser extent. Last year, the KX250 was a secret favorite of the novice-level riders who participated in our 2019 250 shootout. It couldn’t win because riders are generally reluctant to admit that they like one of the slower bike–which it was. Now that it’s fast, will those same riders freely admit how much they love it? Maybe. It has the same feel. It’s narrow and light feeling. Now the brakes are better. The fork might be better, but it’s too early to tell. We have a lot more testing to do. The 2020 KX250 will appear in the October 2019 print issue of Dirt Bike. 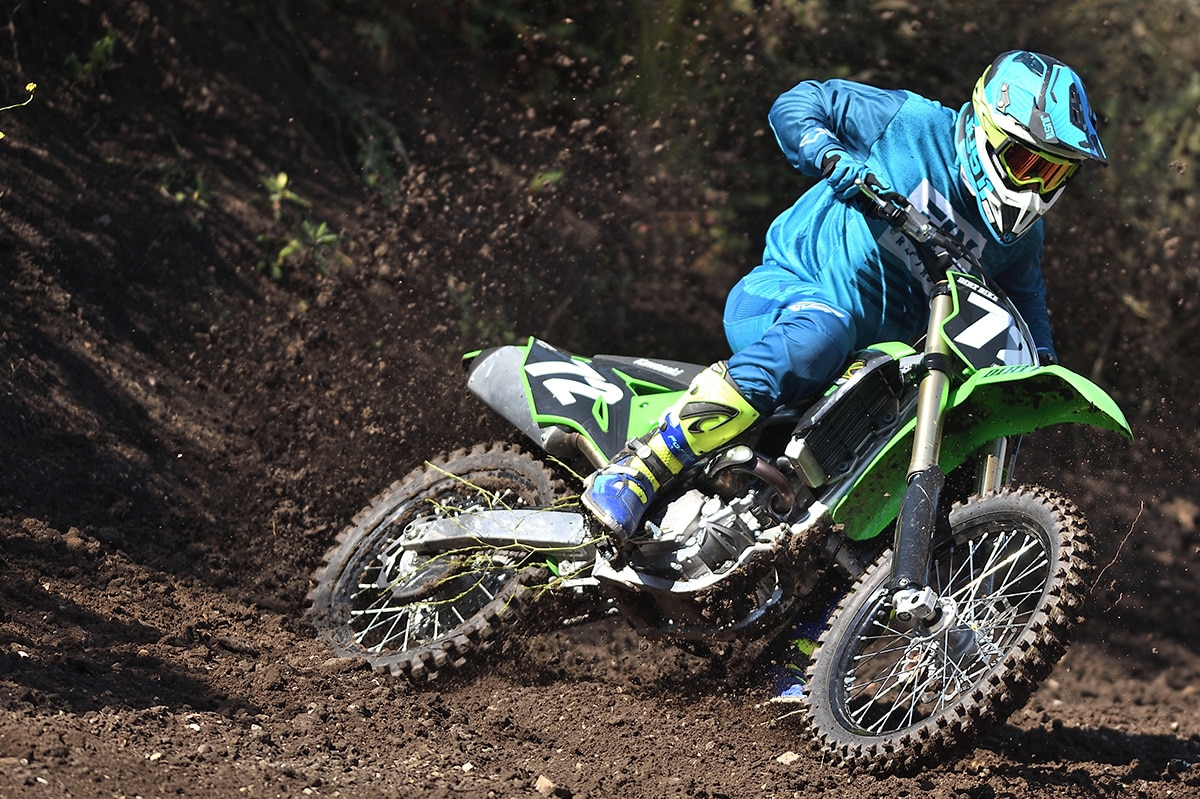 The Silk Way Rally through Russia, Mongolia and China is in its final stages and American Andrew Short is currently in fourth overall. Stage seven of the 2019 Silk Way Rally was made up purely of a liaison section between Dalanzadgad in Mongolia and Bayinbaolige in China. With teams completing the 550.66 kilometres between the two bivouacs, riders were given a rest day with no racing against the clock.

Short has proven that maintaining a solid pace throughout the rally has paid off. Initially out of his comfort zone in the first few stages of the event where average speeds were extremely high, the American rider has stayed focused throughout and as his confidence has grown, so has his pace.

With a number of top-five finishes, Short has shown he can take the fight to the more experienced riders in the championship. Making the most of his maturity and accurate navigation, Andrew has made the very minimum of mistakes to turn in creditable stage times at the end of every day.

Now, with three stages left to contest, the Rockstar Energy Husqvarna Factory Racing team are aiming for strong results in each of the Gobi Desert timed specials and to top the event off with a solid finish. Stage eight of the rally, the longest of the event, will cover a total of 785.11 kilometres, of which 326.6 are timed special, in the tall dunes of the Gobi Desert, China.

Andrew Short: “So far this event has been really impressive in terms of the organisation and from a professional standpoint on how they have put the race together. The route has been really diverse – every stage has been really quite different. Russia was a lot different to Mongolia and now driving into China, it looks like a completely new desert with lots of varied terrain. I am excited for the next few days, they look like they are going to be the toughest days, the longest and the most challenging. I’m happy with my riding and navigation, I haven’t had too many issues over the course of the rally so far. The pace has been quite high but I think that will change now we’re going to be riding through the desert – navigation is going to be really important. We’ll see how the race develops and then closes at the end.” 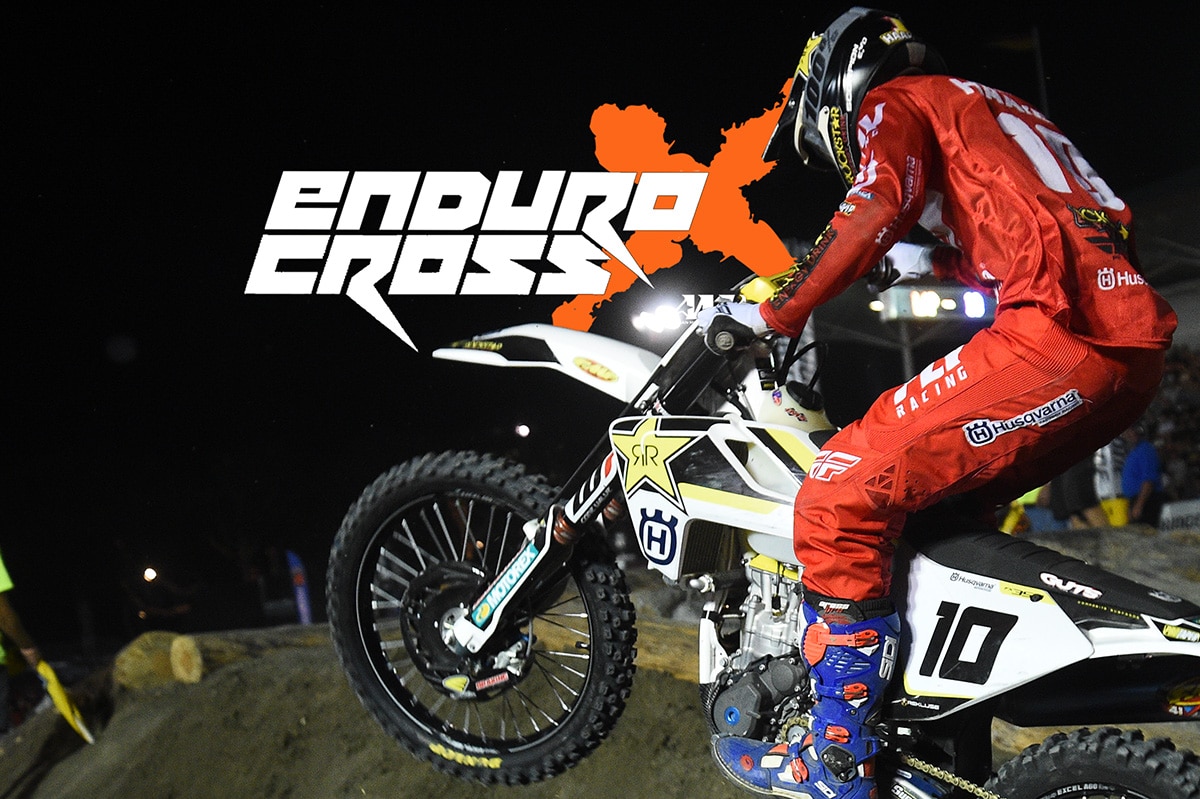 The transition period between the old EnduroCross and the new one is complete. Tod Hammock and Eric Peronnard now officially have acquired the name and the trademarks to run EnduroCross in the U.S.  In case you missed it, there was a brief period where it looked like there would be no 2019 EnduroCross series. The owner simply didn’t see it to be a worthwhile pursuit. The original founder, Eric Peronnard, team up with Arenacross promoter Tod Hammock immediately to announce their own arena enduro series. Manufacturers then got on board with it and now it’s official. Here’s the press release:

Tulsa, Okla., July 11, 2019 – Tod Hammock and Eric Peronnard have acquired the EnduroCross name, trademarks, website and social media channels from Bonnier Corporation. The duo recently confirmed a three-round AMA sanctioned indoor extreme off-road racing series for 2019 and now will be able to build on the recognized name that Peronnard created in 2004.

“We are happy to keep the EnduroCross name and series alive and aim to make it better than ever over the coming years,” said Eric Peronnard, the creator of EnduroCross.

“The EnduroCross name is well-known and the social media channels have a strong following so we are thrilled to be able to build on this,” said Tod Hammock, the promoter of the Kicker Arenacross series.

The three round 2019 series will kick off on August 24th in Prescott Valley, Arizona. The top teams and riders have all confirmed that they will be participating and several sponsors have confirmed their support to help to keep EnduroCross progressing. The pro class will feature a three-moto format and there will be classes for Women, Expert, Amateur/Intermediate, Vet 35+, and a local club class for each round.

Now is the time to make your plans to compete or come see one of the 2019 EnduroCross events in person.

Tickets for round one in Prescott Valley, Arizona are available here: http://www.findlaytoyotacenter.com/events/endurox-extreme-offroad-racing 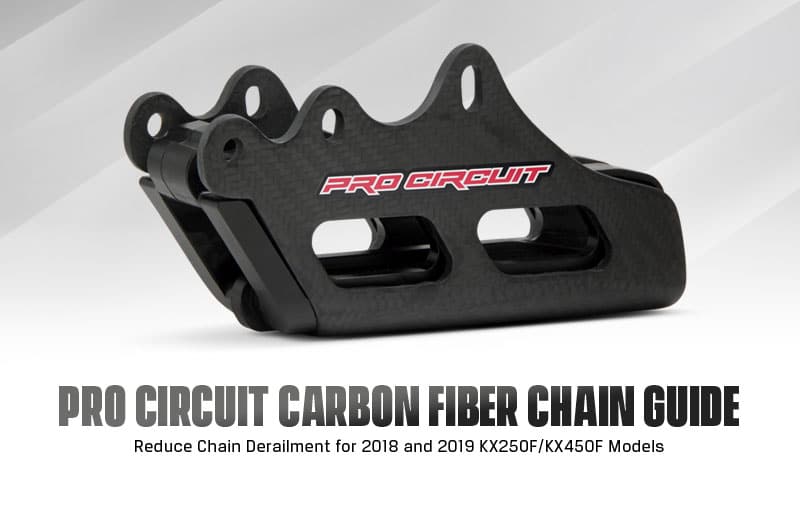 The people at Pro Circuit just showed us their new carbon  KX chain guide, which looks incredible. The chain guide includes a carbon fiber bracket as well as a block insert. The bracket extends farther towards the rear wheel than an OEM bracket, allowing for a precise feed of the chain directly from the guide to the sprocket. The block insert is CNC-machined from high-density polyethylene, providing a durable, long wearing and low friction surface for the chain to ride. The insert fits tightly within the bracket and wraps around the front face to provide wear protection. The insert can be purchased on its own as a replacement if needed. The Pro Circuit Carbon Fiber Chain Guide is a must-have item for 2018-2019 KX250F/KX450F racers or recreational riders. It sells of $305.