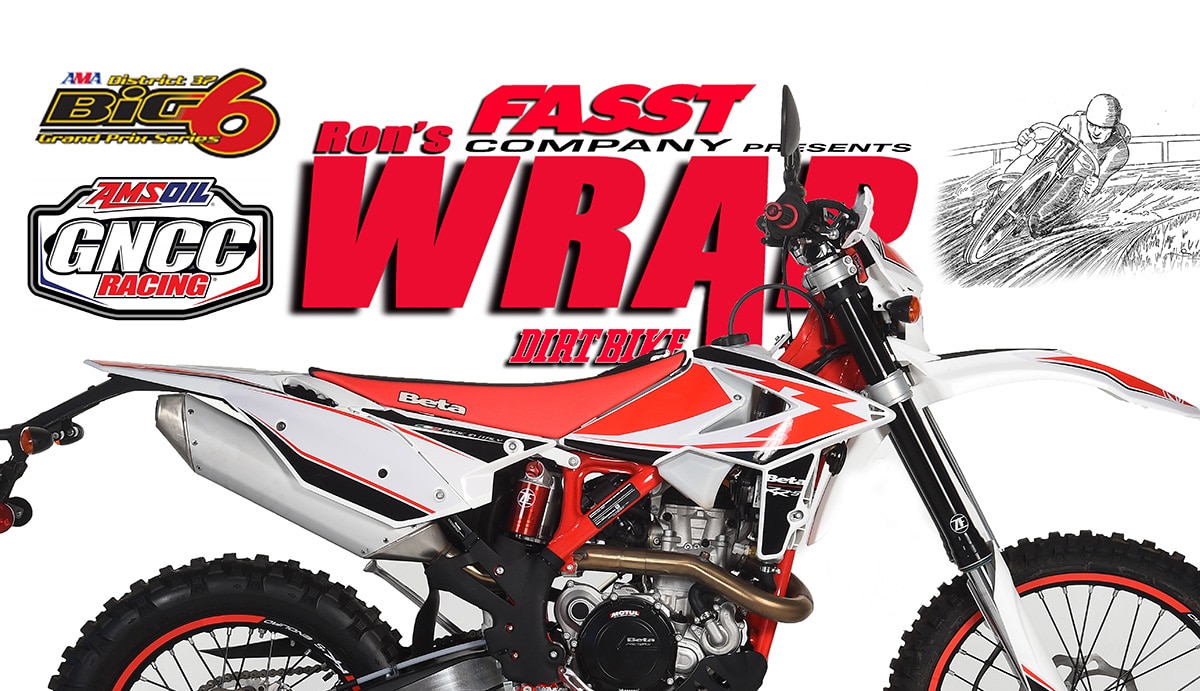 Dual-sport bikes have been the focus at Dirt Bike this week. The 2019 Beta 430RR-S arrived, and we’ve ridden it several times, including one ride alongside the brand-new Honda CRF450L. Beta is a small Italian manufacturer that’s been very aggressive in our world. Their main emphasis is two-strokes, dual-sport bikes and trials bikes. At one time, they were hard to find and expensive, but things are changing The number of these bikes coming to the U.S. has increased dramatically and even though they’re still pricey, so is everything else. The price of the Beta 430RR-S ($10,499) isn’t that different from the Honda CRF450L ($10,399).

Beta makes four different dual-sport bikes from the same basic platform. The 350, 390, 430 and 500 are almost indistinguishable from each other, differing only in bore and stroke. They all have different personalities and that keeps them in the line, coexisting. Equipment is the same: they all have Sachs suspension, Synerject EFI systems, six-speed gearboxes, Nissin brakes and come standard with a Trail Tech GPS. This is the first time we’ve ridden the 430.

We don’t pretend to understand how the people at the EPA and CARB think, but it appears that Beta has a different set of standards to meet. The bike is quiet, but not as quiet as a Honda, Husqvarna or KTM. It meets all the emission rules in all 50 states, but there’s no air pump hanging off the side like the Honda’s and no catalytic converter in the comparatively small muffler. The bottom line is that the Beta feels more like a dirt bike. It’s 25 pounds lighter than the Honda on our scale (252 pounds without fuel compared to 277). A Husqvarna is still a little lighter. We haven’t weighed the FE450, but the nearly identical FE501 is 248 lb. For 2019, Beta made a number of changes. For a list of the updates to this model and other 2019 Betas, click here.

The only giveaway that you’re riding a dual-sport bike is tires and mirrors. Otherwise, the Beta is a smooth, light-feeling dirt bike. The power is a little soft off the very bottom, but then it has a fun little hit. It easily outperforms the Honda in peak power, although the CRF450L  has more low-end and is geared lower in first. Is the Beta as fast as a 450 motocross bike? No, not by a long way. We don’t want that. On the trail, the 430RR-S is way more fun, doesn’t overheat and it rarely stalls the way a full-competition MX bike does. It also seems that the occasional mapping glitches that we experienced when we tested the 500RR-S last year have been cleared up. 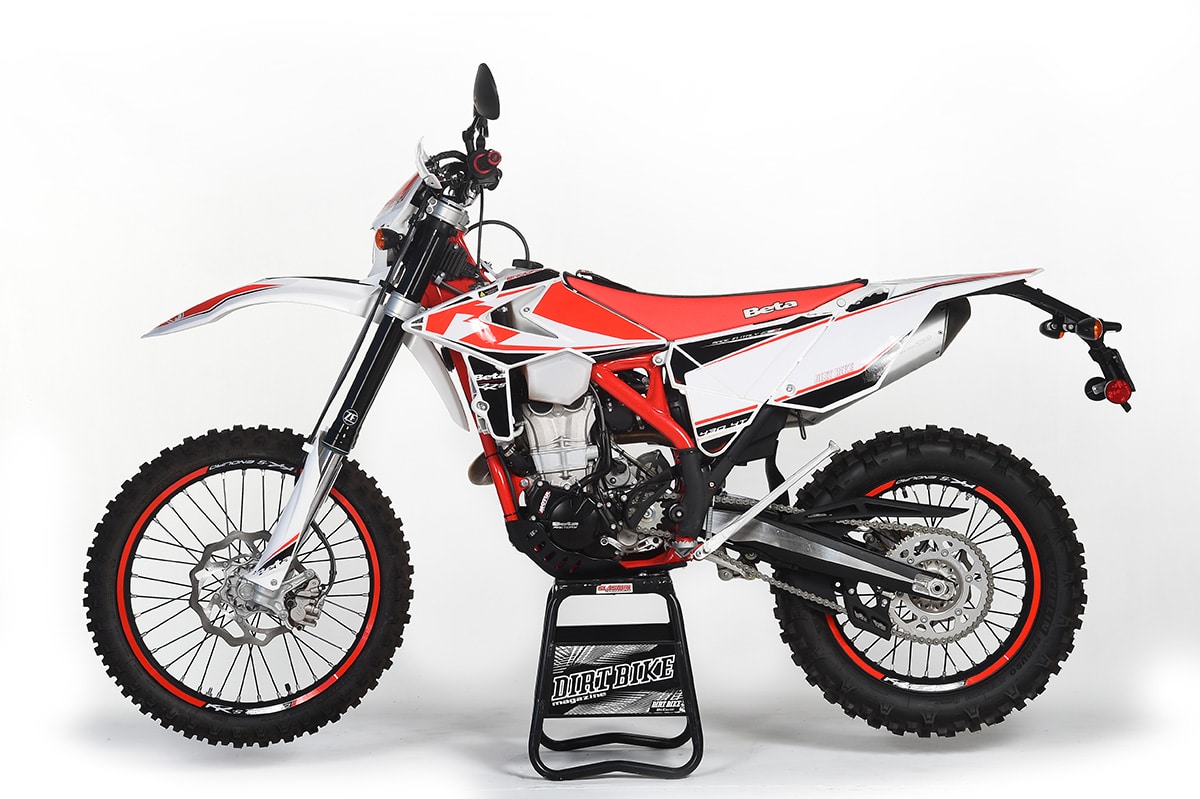 We have a lot more riding to do on the 430. So far, we’re pleased with it and we haven’t yet torn off the blinkers and license plate bracket. We will. Some things haven’t changed. A full test is coming up in the print edition of Dirt Bike. 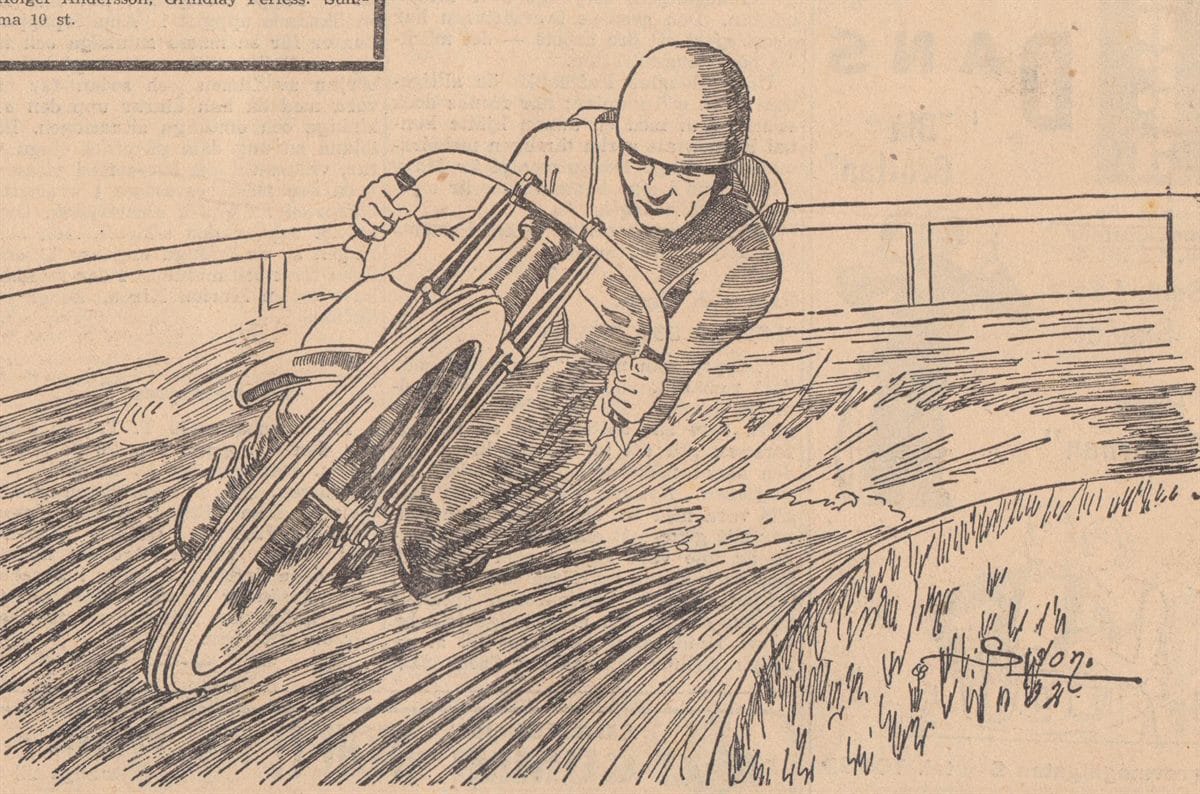 I always get a kick out of Ken Oausson’s Husky Good Old Times Blog. This month he looks back at a Swedish publication that clearly was the inspiration for Cycle News and perhaps the whole motorcycle press industry. “Motornyheterna” was established in 1925. I never heard of it until now, but it probably changed how motorcycle news was presented world wide. Click on the image above to read about it on Husqvarna’s website.

The 2018 AMSOIL Grand National Cross Country (GNCC) Series, an AMA National Championship, heads to Mount Morris, Pennsylvania this weekend, September 29 and 30, for the Mason-Dixon GNCC at Mathews Farm. This marks the return of GNCC Racing to the Mathews Farm property for the first time since 2003. 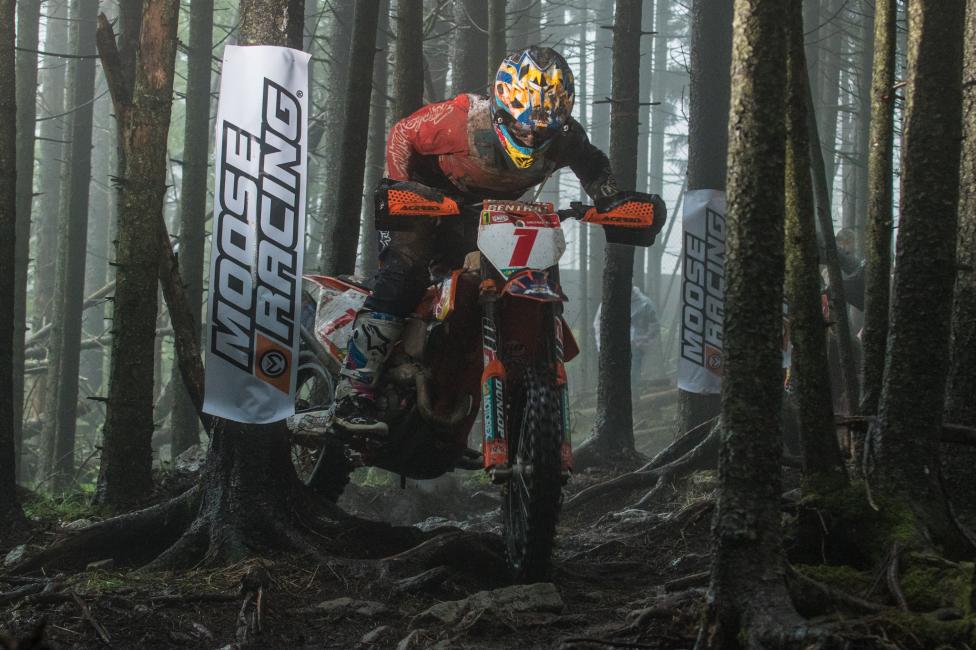 Kailub Russell is ready to battle with the rest of the XC1 Open Pro field for his eighth win of the season.– Ken Hill

This Sunday, September 30, FMF/KTM Factory Racing’s Kailub Russell is set to battle with the rest of the XC1 Open Pro field for his eighth win of the season. After earning the overall win at Snowshoe and extending his points lead, K. Russell currently has a 54-point gap over second place heading into the last four rounds of the 2018 GNCC season. However, Rockstar Energy/Factory Husqvarna Racing’s Thad Duvall, who currently sits second in the National Championship standings, is looking for redemption after battling for the win at round nine before a crash that ultimately injured his wrist. The last time GNCC Racing was on this property, Duvall and K. Russell were both in the youth division with Duvall winning the overall and K. Russell finishing 11th overall. 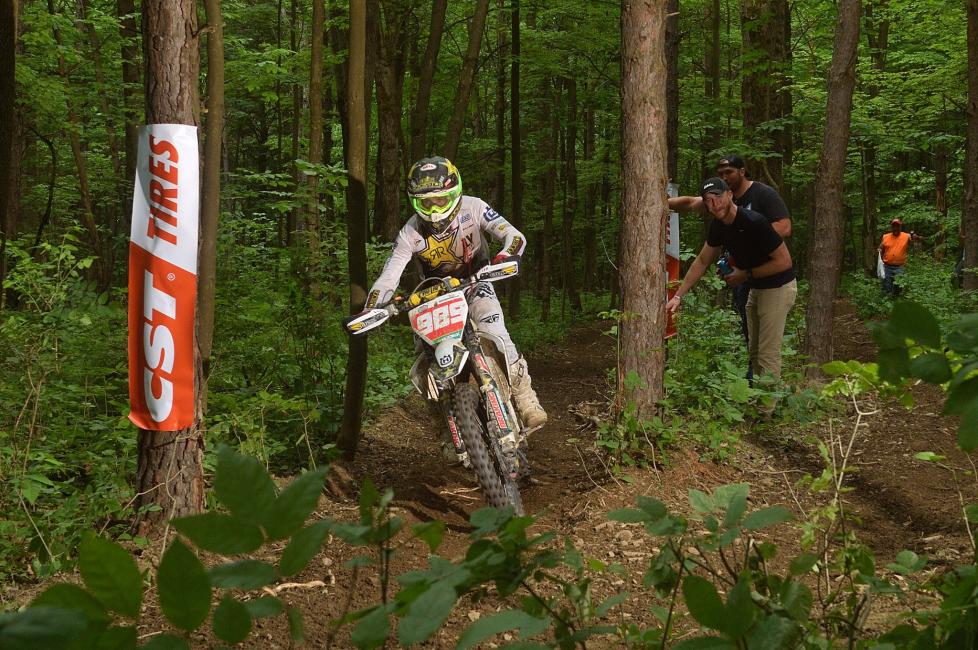 After re-injuring his wrist at Snowshoe in June, Duvall is ready to redeem himself this weekend and contend for the overall win.– Ken Hill

JCR Honda’s Trevor Bollinger has been having a standout season thus far, with three podium finishes and finishing inside the top 10 at the first nine rounds. Bollinger even managed to try and battle for a win at the Tomahawk round in New York. This weekend Bollinger will be one to keep an eye on as he has shown he has the speed to run at the front of the pack, and since this is an all-new event the overall could be anyone’s to claim.

Kailub Russell will then turn around and head out west the next weekend for the Big 6 round at Ridgecrest. He’s had spotty performances in his gutsy move to race on both sides of the country. He’s in seventh place in the points after missing a round. Right now, JCR’s Trevor Stewart has a 17-point lead in that series, with Zach Bell in second. For more info, go to the Big6Racing website.

The same weekend, October 6 – 7, will be the Motocross of Nations at RedBud. I’ll be there, so you can tune in to www.dirtbikemagazine.com for updates on all the action. It’s the fourth time the event has been on U.S. soil, and the U.S. team is the strongest it’s been in years. It will consist of Eli Tomac, Aaron Plessinger and Justin Barcia. The French team, oddly enough, will not have Marvin Musquin, even though he wanted to go and won the RedBud round of the Lucas Oil Pro MX Series. Gautier Paulin, Dylan Ferrandis  and Romain Febvre will be the French team, an it’s still considered the strongest competition for the U.S. I can’t wait! 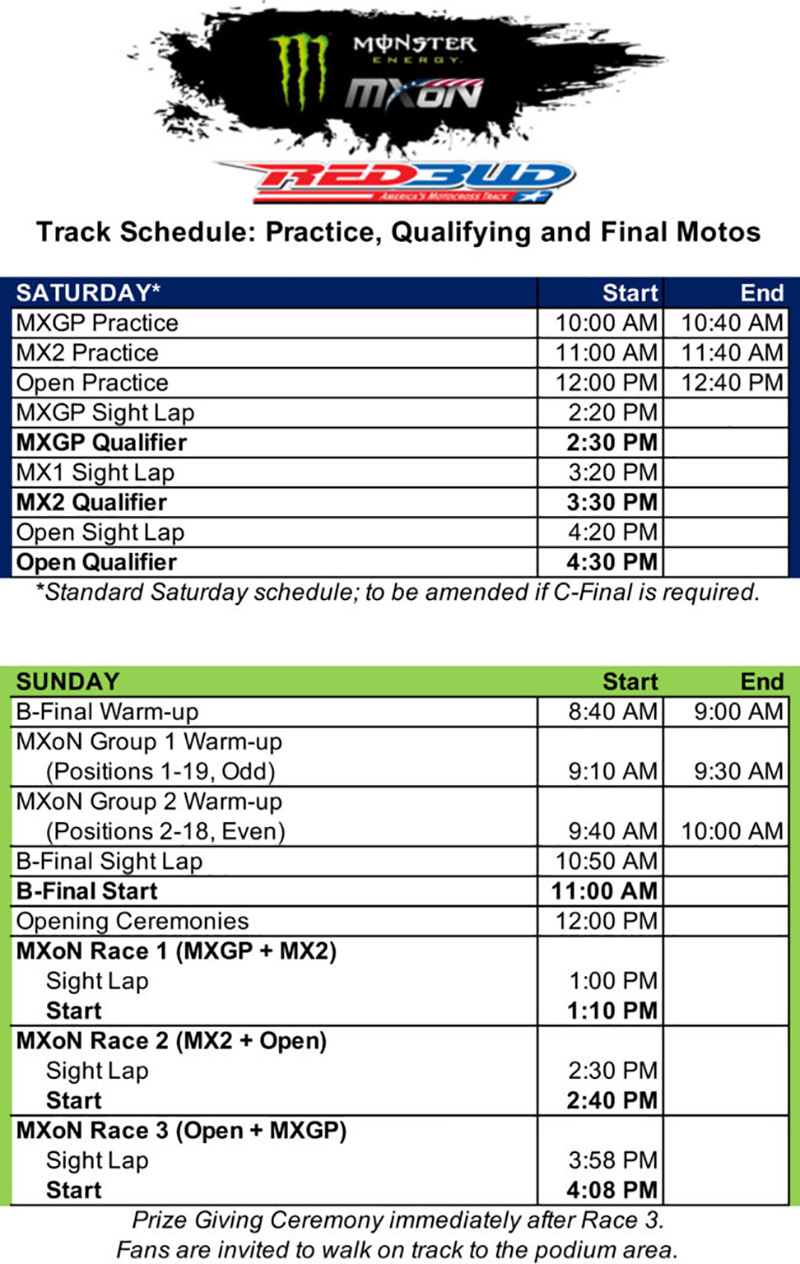 WHAT’S NEXT FOR DEAN WILSON