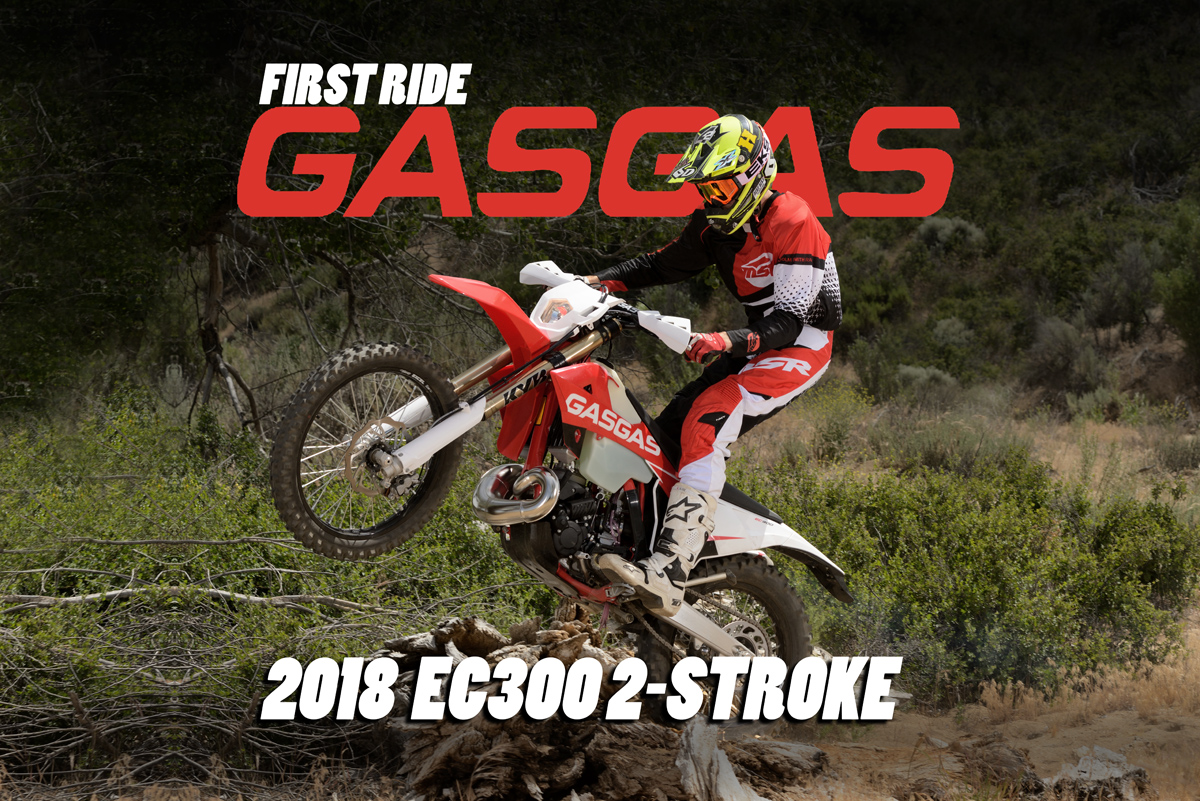 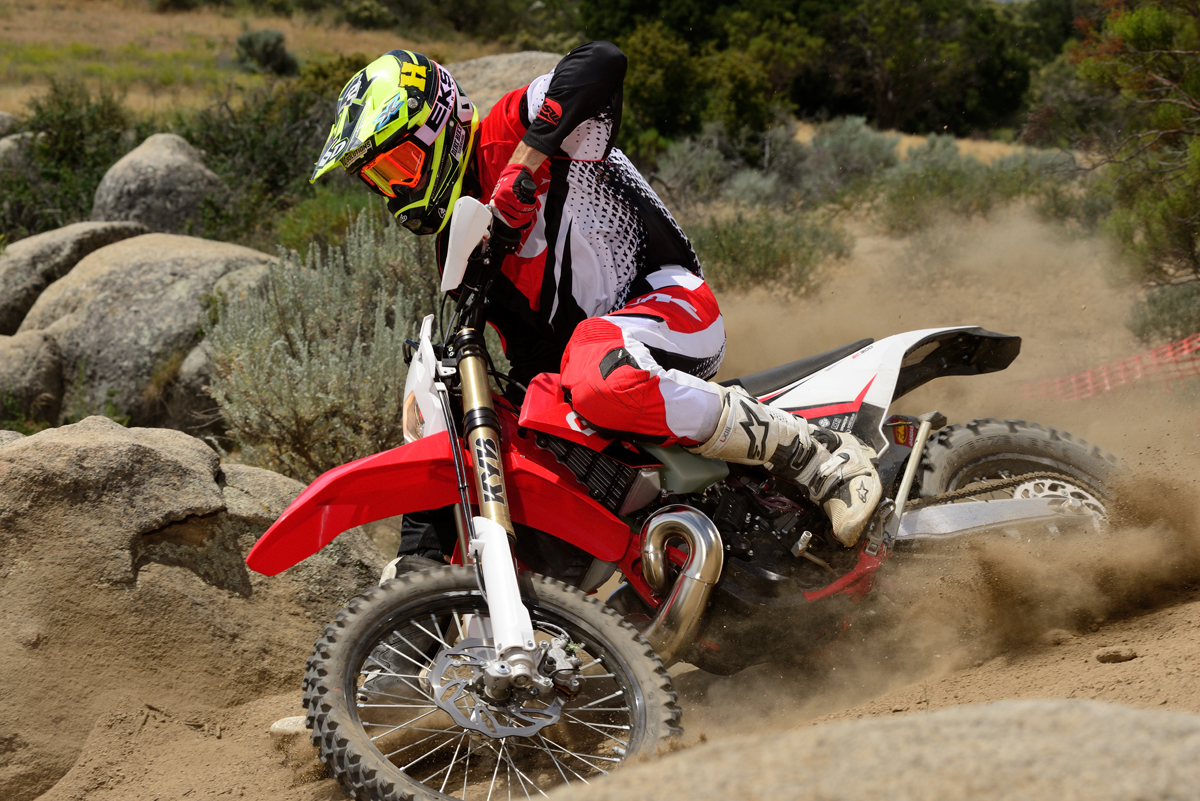 Gas Gas presented its new 300 two-stroke to the press at MotoVentures Training Compound this week, and it’s a massive step forward for the small Spanish company. The bike will be available as a 250 and a 300 this fall, and it features an entirely new chassis with a mostly new motor. The resurrection of the make has been amazing over the last two years. The doors of the Girona factory shut down in 2015 under the weight of increasing financial debt. Then a Barcelona group called Torrot stepped in and suddenly the factory was not only open, but moving forward with new designs and a long-term plans for the future. The new XC and EC (cross country and enduro) models are the first real product of the reborn Gas Gas, and there’s a new U.S. distributor that is a direct subsidiary of the factory. 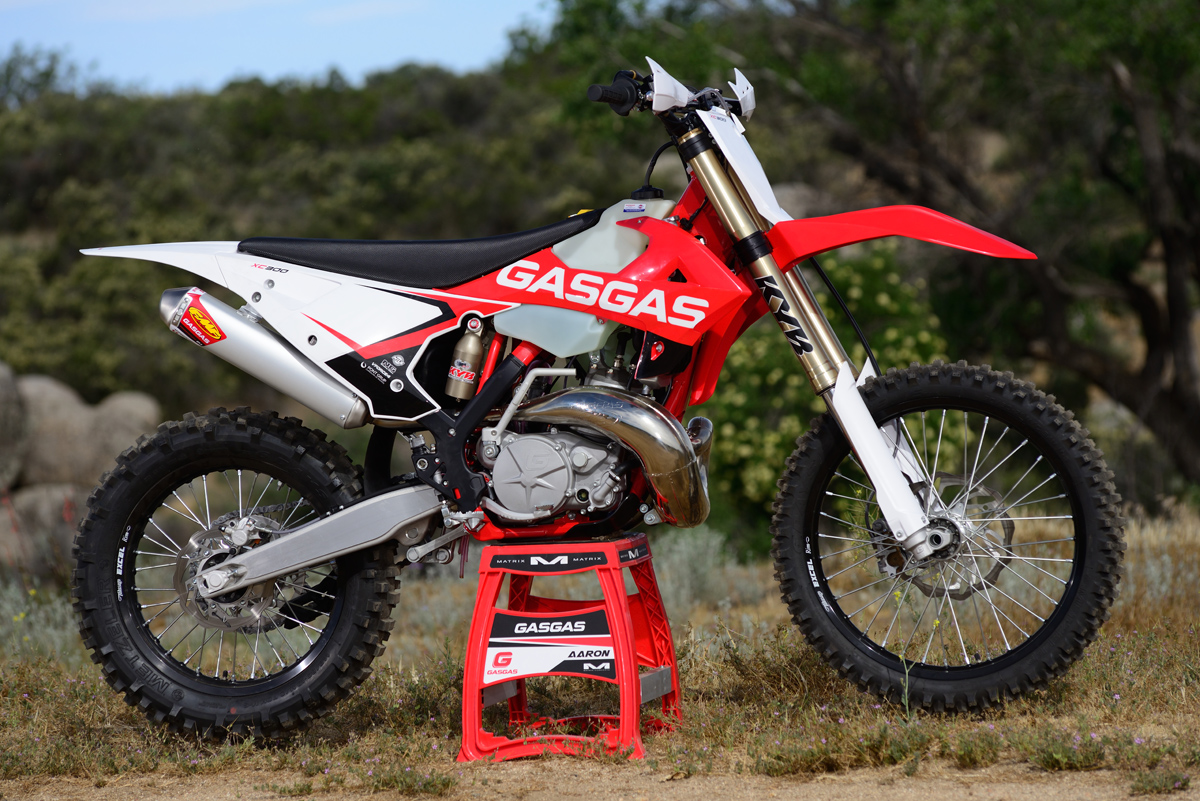 The XC 300 shown above will only differ from the EC model in a few ways. It will have an FMF pipe and stripped of the headlight and odometer. The price is projected to be about $300 less, although exact MSRPs have not been announced. Both the XC and EC versions will have an FMF silencer, although they can not have spark arrestors, because that would jeopardize the bike’s status as a closed-course competition bike, according to the EPA. Strange but true. 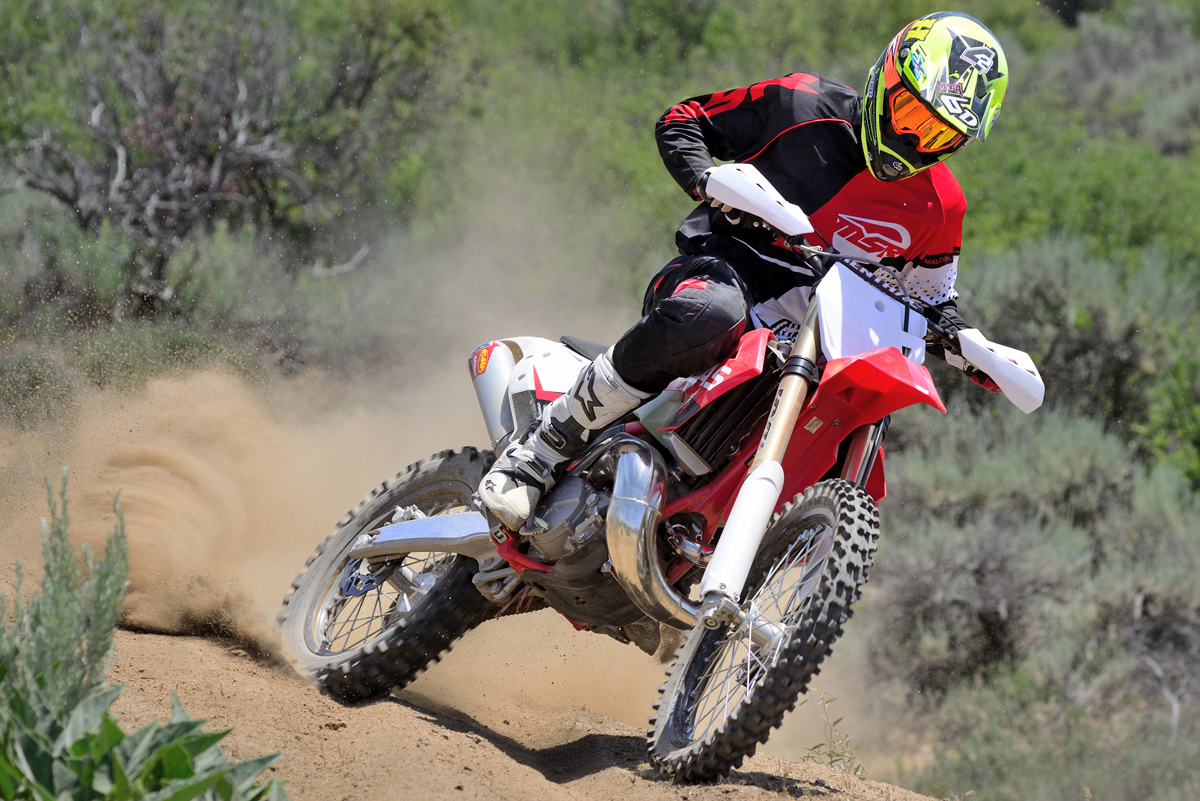 The most important achievement for the new bike is weight loss. The previous model was grossly overweight by any standards, and while we haven’t yet weighed a production 2018 model for ourselves, we have confidence that the claimed dry weight of 231 pounds isn’t far off. Most of this was achieved by abandoning the steel perimeter frame in favor of a backbone design, similar to that of the KTM two-strokes. The swingarm and subframe have also lost  weight. Another big step forward is the use of KYB suspension. The fork is a 48mm OAS, twin-spring design and the rear is a piggyback shock with independent high and low-speed clickers. 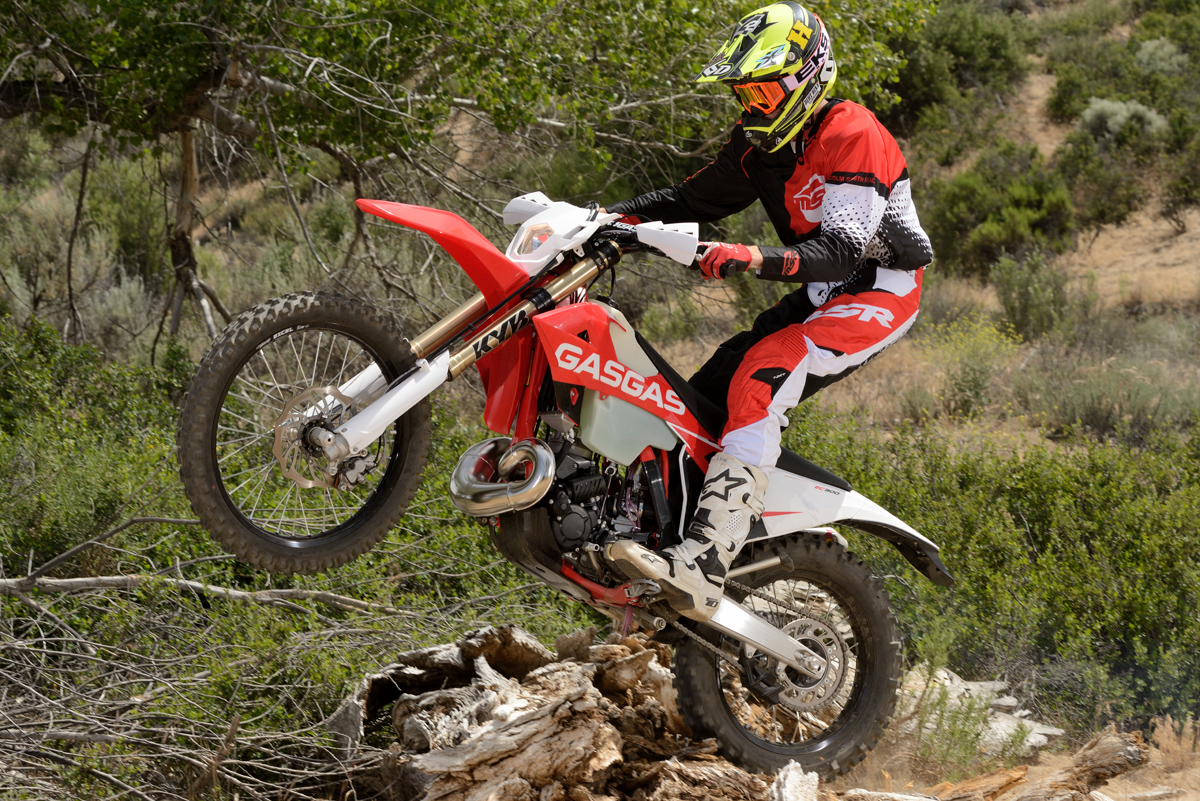 The motor isn’t that far removed from the old one in configuration, but it has a new cylinder, head and crank. The electric start is unchanged, but it has a new cover. It still has a Keihin carburetor. We have heard rumors that a fuel-injected design is in the future, but the factory isn’t saying anything. For now, a version of this bike meets Euro 4 standards for street use in Europe, but not here. 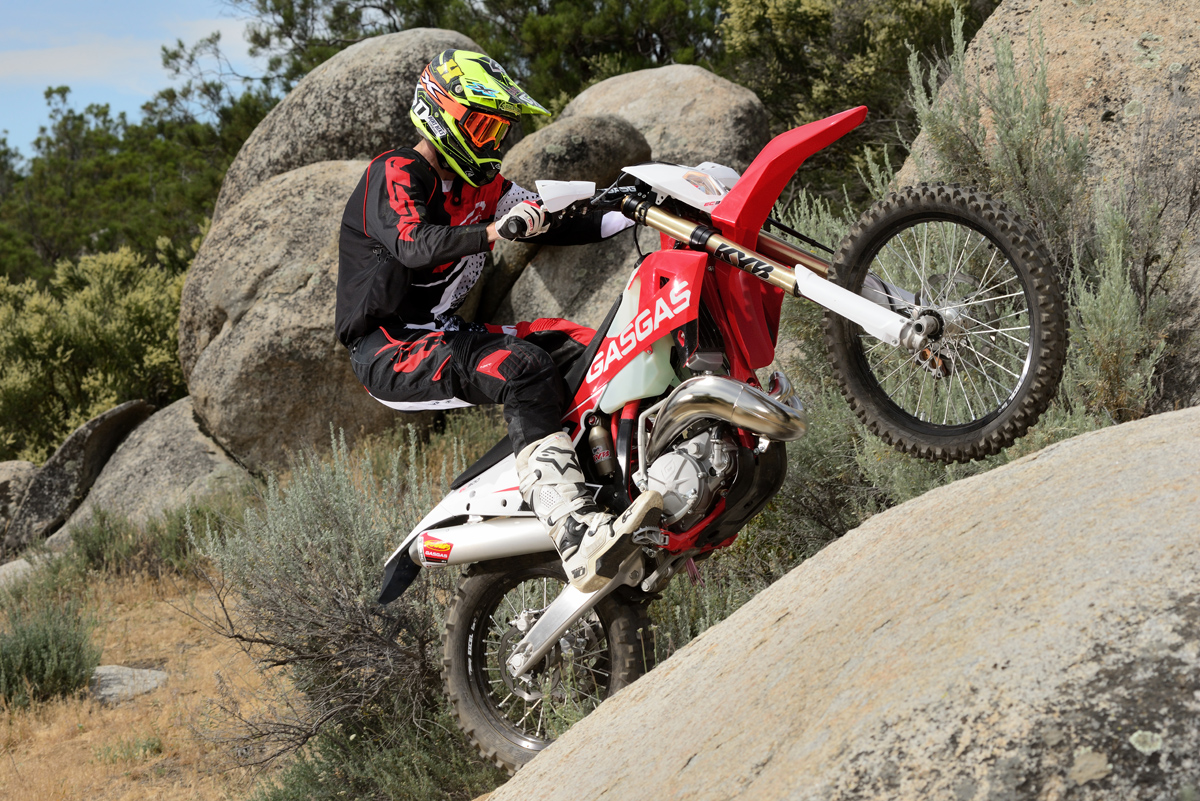 We got to ride both versions of the 300 for a day, and we’re amazed at the transformation. This bike is now a legitimate alternative to KTM, Yamaha and Beta in the realm of two-stroke off-road bikes. If you’re familiar with the previous version, you know it had its strengths, but you had to tolerate vibration, suspension issues and a serious power shortfall as well as the weight, which was over 250 pounds. Those issues are mostly gone. The power is in the ball park, but it still has the slow-revving feel and hook-up that riders loved about the original. The suspension is soft but very well balanced. And the bike has excellent ergonomics. Gas Gas motor’s strongest asset has always been its smooth revving nature and the fact that it was excellent in technical, tight terrain. That hasn’t been compromised. We’re getting one for a full test, so check back or go to the U.S. website for Gas Gas.

BLAST FROM THE PAST: DICK BURLESON