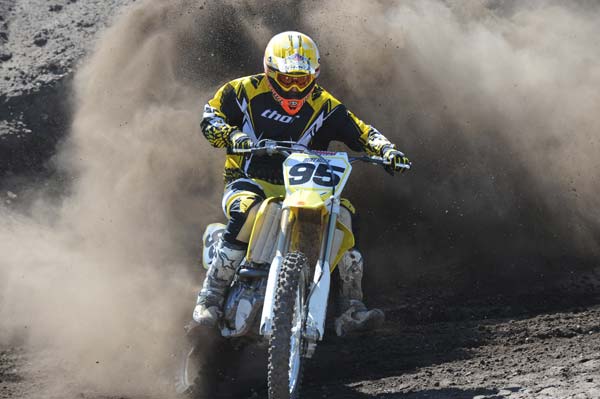 Mark Tilley praised the RM-Z handling, calling it balanced and easy to go fast on.

Suzuki is a company that gets great race results and while much of the credit goes to the soon departing Roger DeCoster and his team, a big chunk of their success has to revolve around the machine itself. The RM-Z450 was the first fuel-injected Japanese motocrosser. It was the first FI bike to win a championship and under the tutelage of Mr. Dungey has decimated the outdoors this year. For 2011 the 450 Z was modified to meet the tighter noise requirements set by the AMA. At 94 db, this meant that a new exhaust system had to be implemented. But with less noise (and more rear muffler) you get a softness to powerband so the 450 Z’s intake and exhaust cam profiles have been revised with the goal being more performance (to offset the stifled exhaust). At the same time the fuel injection’s ECU settings have been updated improving linear acceleration and more yank on top. The Keihin throttle body has a stronger injector and a new fuel line cap comes with the machine to keep debris out of the fuel pump during maintenance. There has been some work done to increase the durability of the crankshaft and the compression ratio has been upped from 12.2:1 to 12.5:1.

The RM-Z is a superb jumper, having stiff enough suspension and inherent chassis manners that let crave the input of a pro, or the lack of feedback from the less skilled.

-The new exhaust note is welcomed. It’s definitely softer on the ears.

-Starting is a one to two kick affair.

-The chassis, suspension and all parts that hang on the Z are identical to last years, with the exception of the bar color on the Renthal Bulge unit.

-The Showa suspension is in no way plush, but is a great combination of stiff enough with just enough cush for hard-core moto tracks.

-It’s a great jumper. The aluminum frame is the right combo of rigidity, mated to suspension that doesn’t wallow with the result being a consistent attitude when airing out.

-There is not another motocrosser that turns as well. Bottom line, this thing carves hard!

-While the power is most definitely softer, we in ‘no’ way felt it was worse. In fact, it felt more tractable and is complimented be excellent spacing in the 5-speed gearbox.

Showa suspension returns unchanged, yet it does a very good job of swallowing the big hit and keeps the bike balanced and positive when the track gets hacked.

AND IN THE BIG SCHEME OF THINGS….

The 2011 Suzuki RM-Z450 actually received very positive changes to a package that was pretty darned tight to begin with. We love the new exhaust note, believe the power changes to be more applicable to the masses and when combined with stellar handling traits, this machine rates high with our staff and testers simply because it’s easy to go fast on. In the world of 450 motocrossers, she isn’t the lightest, or the fastest; but the RM-Z is a cornering champ and is blessed with handling habits that everyone praised.