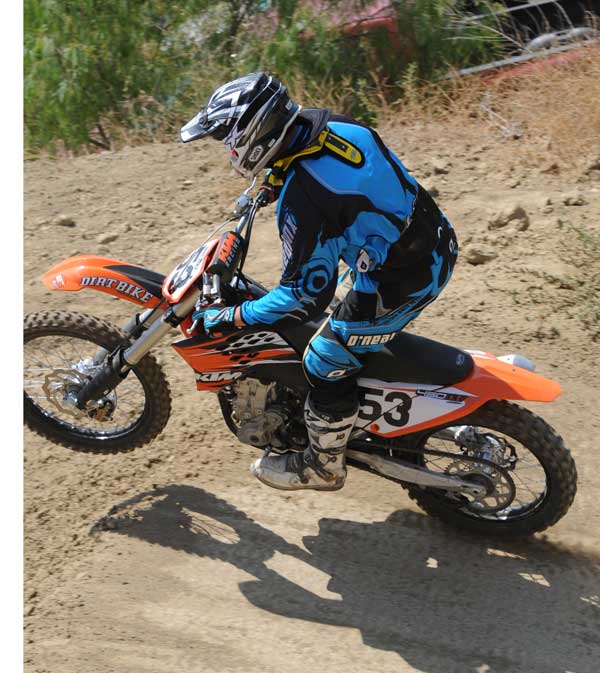 For a machine that really doesn’t look all that changed from the ’09 model, the KTM 450SX-F is adorned with big-time updates. First, they fit it with a 5-speed transmission and then proceeded to fine tune areas that are of the most concern to the rider- suspension and handling. Basically the machine was incredibly sound last year, it had the button start (and this is huge!), it made very strong power over a broad range, it was carbureted via a Keihin FCR unit, the suspension was plush and friendly to a wide scope of pilots and the handling was middle of the road.

For 2010 big effort when into chassis changes, and suspension mods. Here’s a quick look at the changes:

• The engine retains the Keihin carburetor, though it has received a leak jet this year. The goal is smoother power down low.

• The steering head is 10mm lower than the ’09; the frame and engine rotate forward lowering the tank and seating position

• KTM has equipped the SX-F with their new (and patented) triple clamps. For past few years KTM has had adjustable (18 or 20) offset clamps. Through testing on the motocross team they have realized that a 22mm offset enhances stability and improves most cornering traits of the machine.

• The WP fork, already improved in ’09 via better lower legs gets new bushings and seals for less stiction and valving to work with the altered chassis.

• The rear WP shock was on the receiving end of some dramatic internal changes last year and for ’10 the damper has been shortened by 4mm.

All of these changes target cornering traits and a lighter feel through the front of the machine.

Here’s my feedback after three weeks of Glen Helen and Piru MX testing:

Power: When the bike was brand new the juice factor was strong, but not overwhelming. It felt broad, tractable and meaty. After 5-hours of track time it got stronger. It seems that KTM fit the 450 with harder rings that require more break-in, but last longer than last years. Right now it’s in the hunt with any 450 out there, with the exception of the KX450F. That sucker is gnarly. Love the five-speed, not so much for moto, but just knowing that I can take it off-road and enjoy a bigger chunk of real estate than I could with a 4-speed.

But, what sets it apart from every 450 motocrosser on the market is the button. Quite honestly when you switch back and forth between machines, kick starting a big 450 feels caveman.

Handling: The fork is a huge improvement, working very well with the new lower steering head. The action is very smooth, feeling soft and plush yet it forms up incredibly well on big hits. Compression adjustments take seconds, as there’s a star adjuster on the top of the fork. Interestingly enough, we never strayed but one or two clicks from stock. Perhaps the biggest improvement in the handling comes in cornering ability and lightness through the front end. The 450SX is easy to maneuver, feels more planted this year (due to the new steering offset) and grabs a line and hold its. The linkless rear end mates to a shorter shock, so the whole machine is lower. Overall the bike feels light, is stable and very easy to ride.

So, the 2010 KTM 450SX-F is going to be a tough customer in the 450 class. Starting, suspension and tractable power highlight a machine that will certainly take the honors in the “most versatile motocrosser” category. How it shakes out against the new YZF and the other Asian machines on a hardcore motocross track is unknown. But I wouldn’t bet against it!