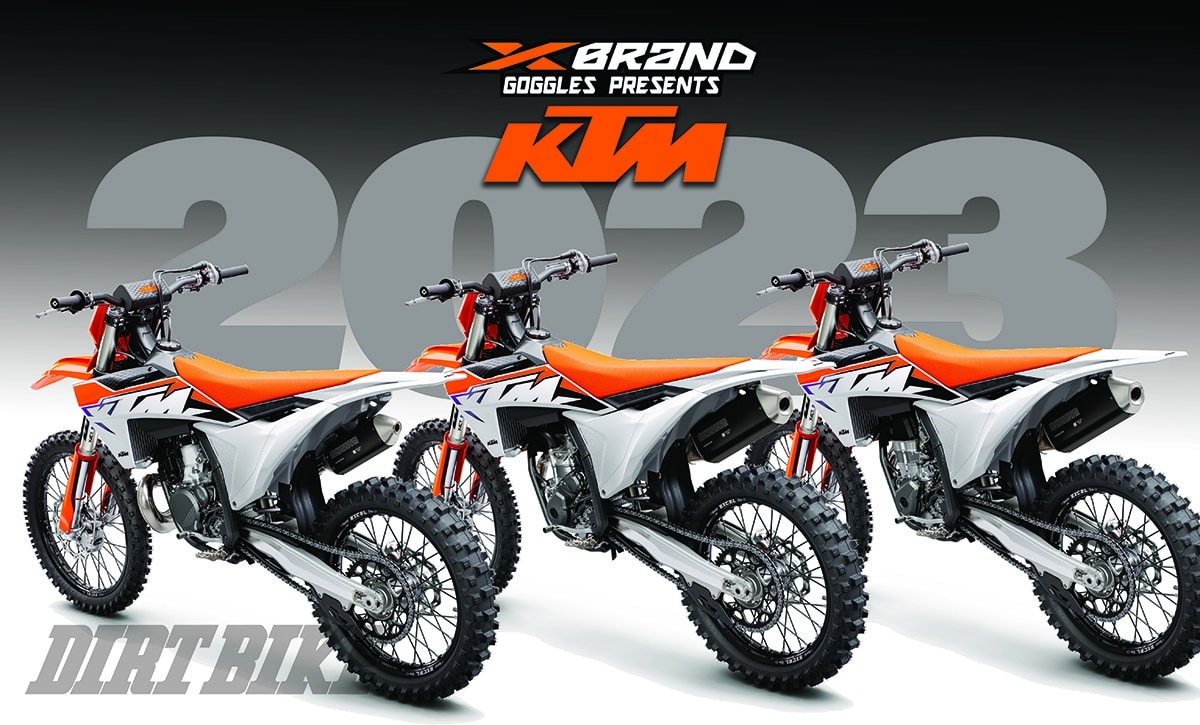 Share FacebookTwitterGoogle+ReddItWhatsAppPinterestEmail
KTM has finally shown us its 2023 competition bikes. This includes both motocross models and the cross country line. The four stroke models are similar to the Factory Editions that we saw earlier in the year with the addition of a 350SX-F. The full size two-strokes are entirely new. The kingpin of the two-stroke motocross line will now be the E-start 300SX. It got a new frame (which is similar to that of the Factory Editions), and it also has an entirely new fuel-injected motor. Transfer Port injection is gone; now the injectors have been moved to a more conventional location in the throttle body. The official press release from KTM appears below.
2023 KTM SX and XC Collection highlights:
Behind the gate: Preparation and equipment
We are market leaders with the use of cutting-edge design and technology throughout our motorcycle portfolio, and the 2023 KTM SXs are perfect examples of this. Partnerships with companies such as KEIHIN, PANKL and Brembo mean that performance possibilities have expanded. The 2023 KTM SX range will count on two maps (one standard, softer, with linear power and another for a more aggressive response and power character), launch control, traction control (only for SX-F models), a ‘roll-over’ sensor, an hour meter as standard, with electronic fuel injection status, and a fuel indicator through the Keihin engine management system. While preparing for battle, quickly and easily set your WP XACT suspension with the completely tool-free adjustments, now possible with the latest spec WP Suspension engineering. New 1.9 gallon (7.2 l) polythene fuel tanks can quickly be filled (feeding into the protected one-piece fuel pump and filter) and a quick check of the Excel alloy rims is faster and easier thanks to the fresh spoke ‘nipple’ design. You’re READY TO RACE.
Gate-drop and surging into action
Fired up with the electric starter (on all models) KTM SXs hammer along the straight and into the corners and jumps with ease. Our engine packages are more compact, more durable, more serviceable and offer the best power-to-weight ratio across the board.
New cylinder heads translates into performance gains, while rearward rotation of the engines by two degrees has given better centralization and an improved drive out of corners. Brand new 5-speed PANKL Racing Systems transmissions with an additional sensor for the four-strokes mean that up-shifts (from 2nd gear onwards) are slicker, thanks to the Quickshifter function. The Quickshifter can be disabled with a switch on the handlebar to meet rider preference, while a new, weight-optimized shift shaft in the transmission means decreased shifting force at all times. A Brembo hydraulic clutch ensures top-of-the-range dependability whatever the conditions.
With our two-strokes, less carbs = more muscle. We’ve graced our KTM SXs with a new electronic fuel injection to ensure simplicity, enjoyment and unmatched performance. Therefore, the SXs get a new 39 mm throttle body with injectors positioned for pinpoint response. A ‘remix to the premix’ counts on a TPS-sensor for better behavior while idling and for perfect fuel-air mixture (and can’t forget the cold start mechanism, which is the same as the KTM SX-Fs). The effect is ‘more’: more power, more response, more assurance, more ease, more fun.
Finding the flow then attacking the track
The demands of competition, fitness and the track set the tone for any moto. It’s in the depths of this hard, physical stage of a race when the connection and feeling with the motorcycle can make the difference and allow you to fully harness the excitement and fulfilment of competition. We’ve taken our chassis and frame design principals back to the core and have sought better dynamics, stability and strength. ‘Longitudinal rigidity’ is a key phrase and with accentuated rider feeling coming through an ‘anti-squat’ philosophy. This has been achieved by a new frame and mounts, subframe, swingarm, engine repositioning, ergonomics and WP Suspension tech.
The frame is hydro-formed, laser-cut and robot-welded. The wall thickness has been optimized to achieve improved specific rigidity in high stress areas such as the steering head and all new shock mounts. The KTM SX two-strokes have new parallel frame mounts. The design is sportier with sights on extra agility; an example comes through the new inwardly moved footpegs for even greater clearance in ruts and for dropping the bike flat for scrubbing jumps. New footpegs are even larger in surface area and, thanks to die casting, are even lighter than before. Stiffness has been dialed with lighter die cast hollow swingarms (new casting processes allow for even more weight saving) and a new rear axle. 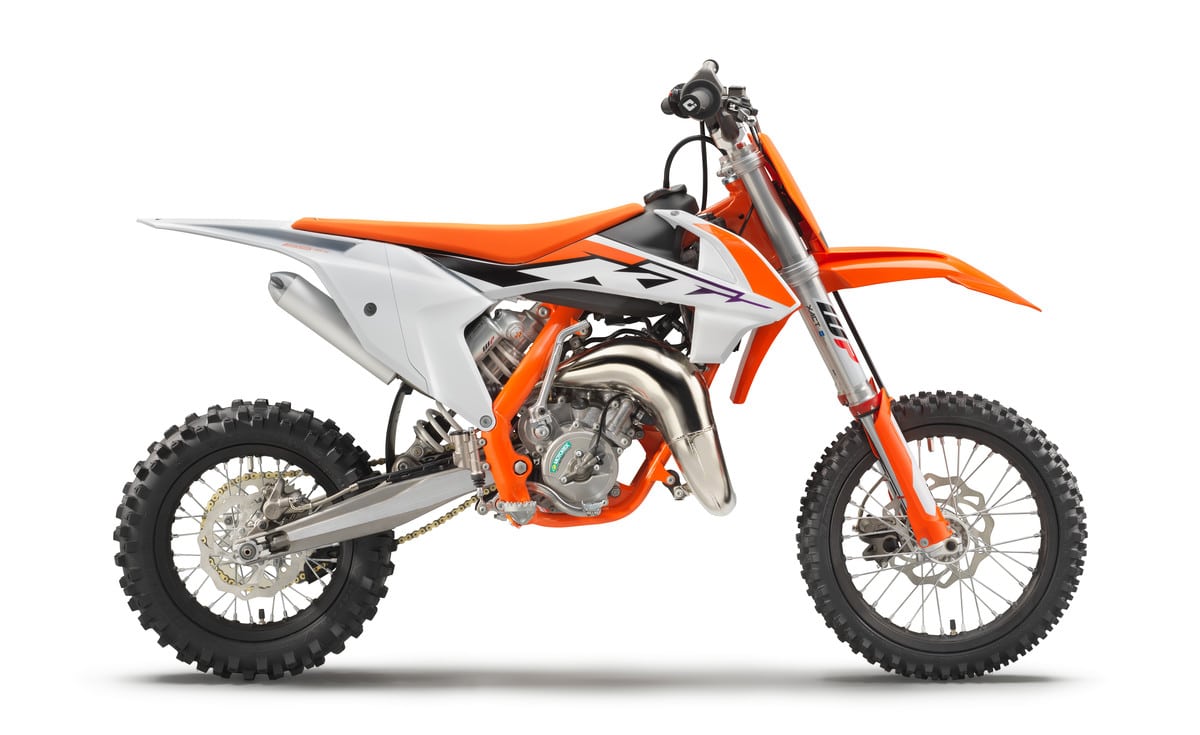 The WP Suspension XACT shock is shorter and lighter. The internal flow of liquids is more flush, reliable and resistant, and the shock’s smaller dimensions lower the chances of pollutants and dirt intrusion. The shape permits higher ground clearance from the linkage, and advanced damping means better traction as the bike ingests bumps with the new geometry and settings. Entering corners or landing jumps any KTM SX will take full advantage of WP XACT forks with AER air technology featuring a new hydrostop for more effective performance and more bottoming resistance.

The 2023 KTM SXs are narrower and further honed, but we have also managed to increase contact area and surfaces to allow even more input into the handling of the bike. The flat orange seat – offering excellent grip and a stance emphasizing greater control – and the reworked front fender are other identifiable marks. The ‘mud flaps’ of the fender prevents excessive soil being flicked up towards the rider and the radiator in particularly wet conditions. 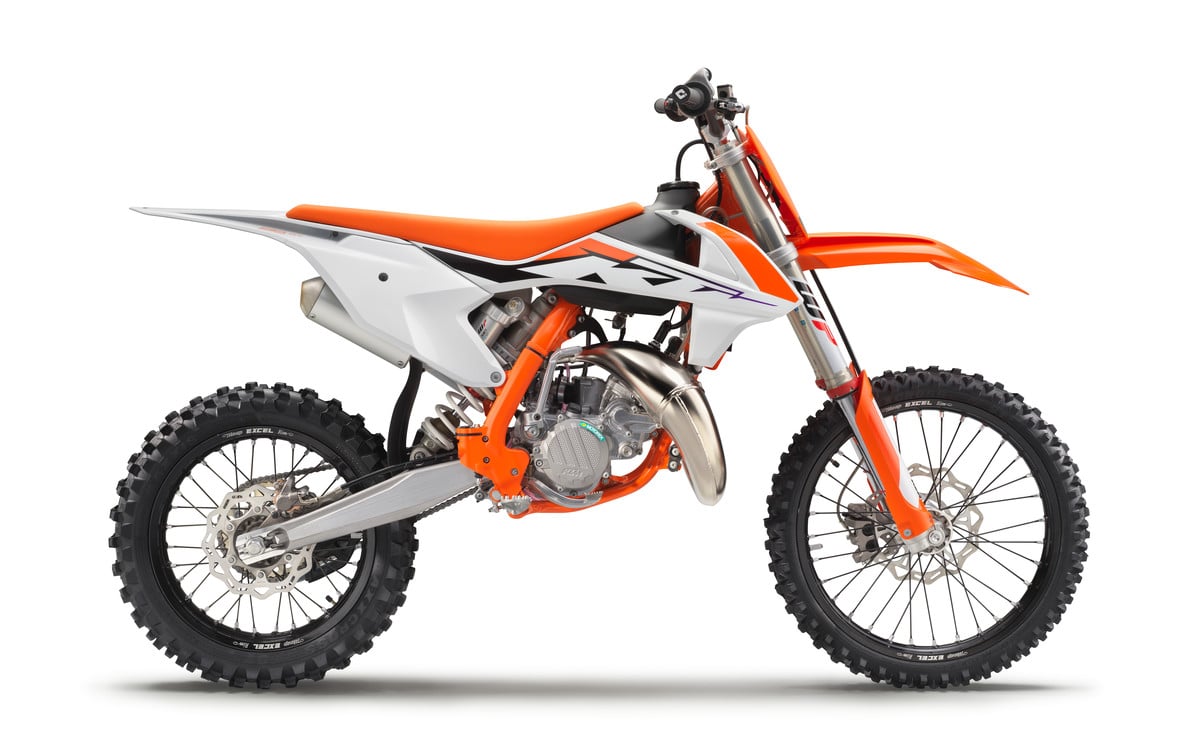 Finishing the moto strong
You’ve gone faster and longer than ever, but any Pro racer will tell you that the last two to three laps of any moto are key. This is another area where the versatility and usability of the new KTM SXs can really shine. The improved energy absorption, thanks to the forgiving chassis design, keeps you fresh even to the very end of the race. Reworked CNC-milled triple clamps with optimized bar mounts and wider grip surface area leads to less handlebar ‘twist,’ ensuring you’re headed straight to the finish even with an unplanned corner laydown. The whole unit is protected by a new number plate design. The subframe, designed with advanced finite element analysis, is now a finely engineered hybrid thanks to polyamide reinforced aluminum, applying strength into the lower part of the frame and extending flexibility for control and comfort in upper sections. 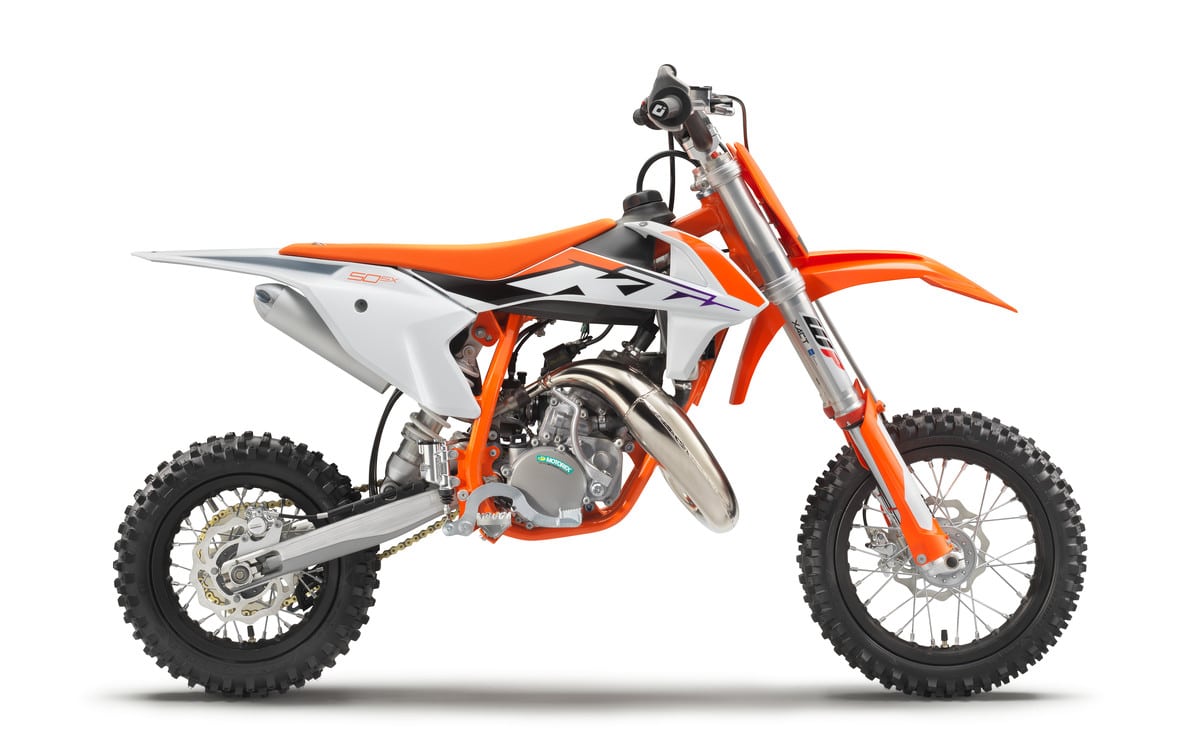 Count on the last inches of traction and performance provided by the Dunlop GEOMAX MX33 tires; chosen for the 2023 KTM SX lineup after a careful testing and selection process. 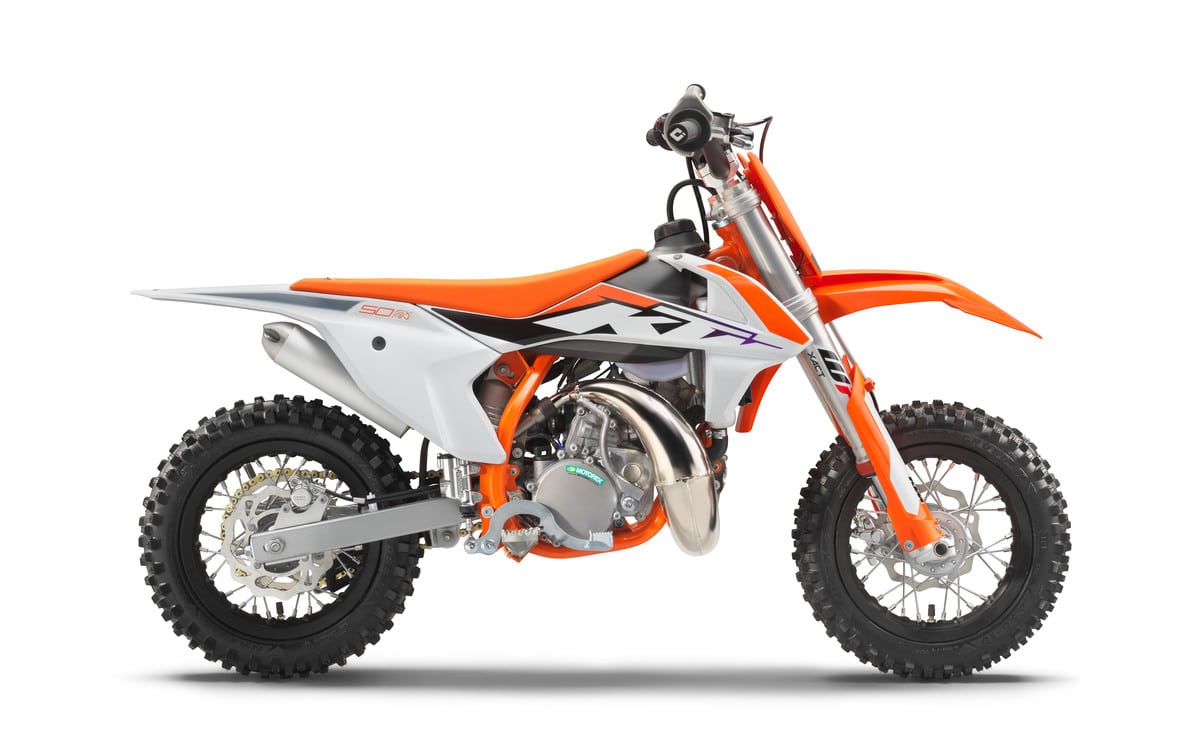 Once across the finish line it will be time to recover, reset and think about the next outing. 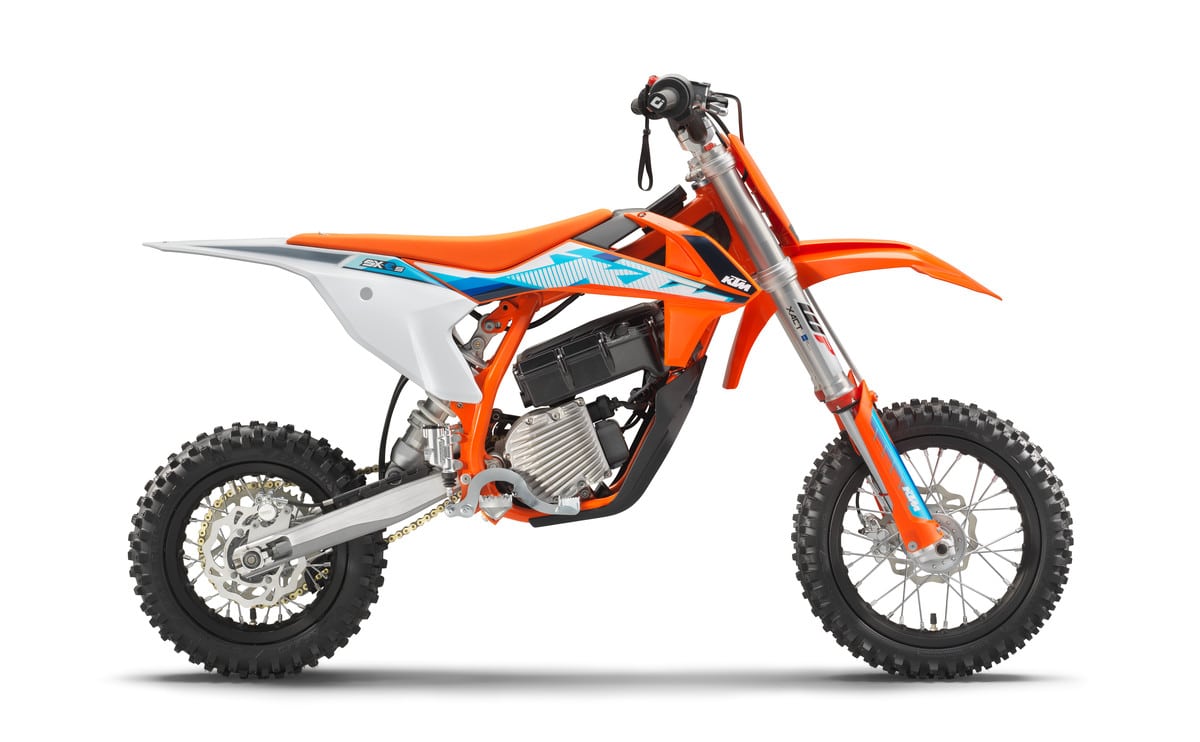 Now that we’ve seen the anatomy of the perfect motocross race, what about cross country?
Our cross country machines take the very best from our SX range – light, nimble chasses, powerful engines, top-level componentry and technology – and add the essential equipment to achieve nothing less than total cross country domination. Large 2.24 gallon polythene fuel tanks, 18-inch rear wheels, XC-specific suspension and gearing, a standard side stand, skid plate and set of handguards, among other features, turn the 2023 SX machines into the dedicated XC cross country weapons that riders and racers love.
There’s no question that we know how to win in cross country competition. Nine of the last 10 AMA Grand National Cross Country (GNCC) Series titles, and on-track for a 10th consecutive in 2022. Five of the last eight World Off-Road Championship (WORCS) titles. Over 91 national victories since 2006. Ben Kelley, Kailub Russell, Dante Oliveira, Taylor Robert and more. The trail is our specialty.
It’s clear to see why the FMF KTM Factory Racing Team is considered the most dominant force in offroad racing, and, as we said, nothing has changed about our determination to win in 2023. The future looks bright aboard the 2023 KTM XC-F models, including the 250, 350 and 450 cc four-stroke capacities and the screaming 125, 250 and 300 cc two-stroke models.
Like the 2023 SXs, the whole of the XC range benefits from improved energy management – comfort from the new frame, subframe and updated suspension – coupled with increased performance across the four-stroke and two-stroke powerplants, meaning whether you’re carving through the woods, tearing across open deserts or mixing track and trail, you’ve got the bike under you to hunt down victory.
The all-new electronic fuel injection feeding the freshly reworked SX two-strokes is also found on the new two-stroke XC range, showing the dedication of the KTM R&D team to the development of two stroke technology. Industry-leading EFI and race-proven electric start will keep you in the race and ready for the podium.
Preparing for the race, hitting the starting line with confidence, getting out in front of the competition and staying there until the checkered flag waves are the keys to any race, motocross or cross country, and once the dust has settled, riders will consider some ‘mods’ to their machines in preparation for the next battle. This is when accompanying KTM PowerParts and KTM PowerWear will have you covered. Riding gear, protection and extra parts and much more can be found and have been especially crafted for our 2023 KTM SX and XC incarnations.

Look for the 2023 SX-F and XC-F four-stroke range at your local authorized KTM dealer starting this June. The new 2023 SX and XC two-stroke models will begin arriving this September.