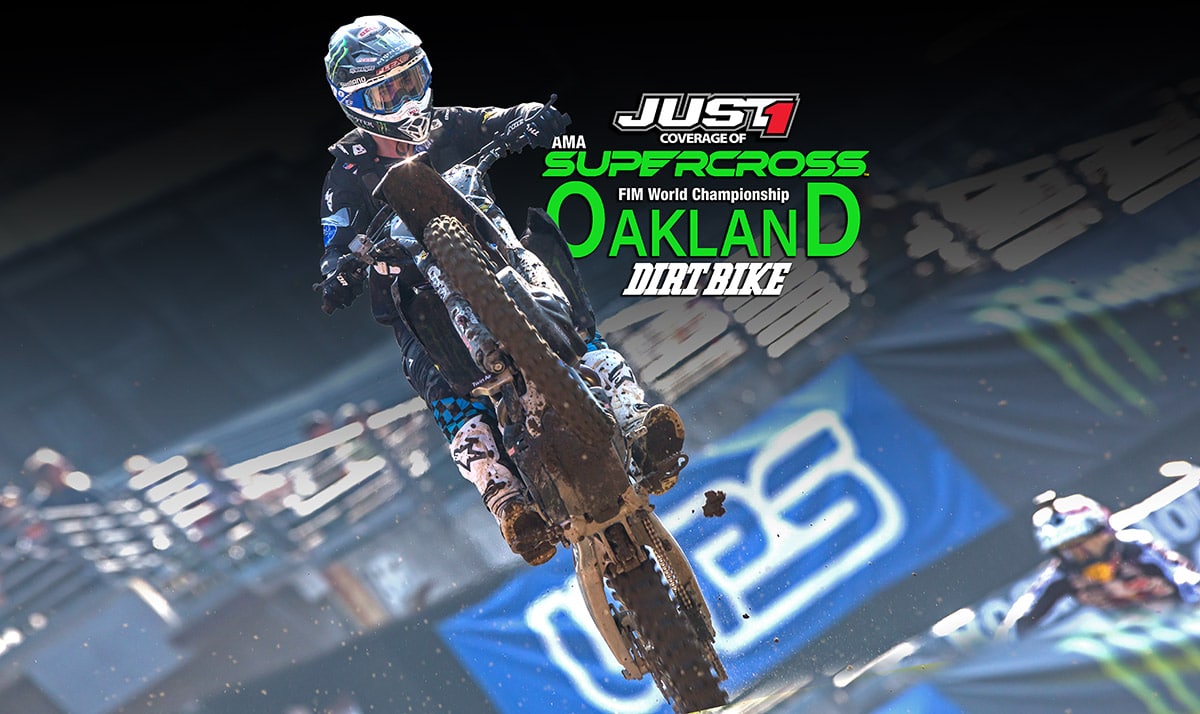 The three-way battle for the 250 West championship in the 2020 Monster Energy Supercross series continued at the Oakland Coliseum this week. This time it was Dylan Ferrandis who came out on top, taking the points lead and the red plate. But Austin Forkner basically battled Ferrandis to a stalemate throughout the night, meaning the battle will continue. Justin Cooper, who lost a good chunk of his points cushion last week, had another tough night, crashing out of his heat and struggling in the main. He still salvaged a third, but lost the points lead. For extended coverage of the 2020 Oakland Supercross, click here.

The first heat featured a dramatic battle between Michael Mosiman and Austin Forkner. The two tangled several times before the end of the race, but both survived to finish 1-2 over Brandon Hartranft and Jacob Hayes.

Mitchell Oldenburg got a clean holeshot in heat two with his Penrite Honda Teammate Luke Clout close behind.  Clout took over on the third lap while Dylan Ferrandis moved up to third.  Oldenburg retook the lead the following lap and Ferrandis made a mistake, losing sports to Cameron McAdoo and Justin Cooper.  McAdoo then passed Clout. Cooper tried to pass McAdoo, but things went backly and Cooper went down. He didn’t get the bike restarted until he was back in 10th. On the final lap, McAdoo took the lead and Ferrandis also pushed Oldenburg back a spot.

Justin Cooper pulled a massive holeshot in the LCQ, which was exactly what he needed. The only rider who could keep his pace in the early laps was Killian Auberson. Lorenzo Camporese and Wyatt Lyonsmith were in the final two spots with RJ Wageman once again the first man out. Logan Karnow passed both Wageman and Lyonsmith to take the final sport with two laps to go.  By the end of the race, Cooper had a 10-second lead.

The main started with Justin Cooper following Alex Martin up front. Austin Forkner got into the mix quickly, passing Cooper for second, who then make a mistake and dropped back to fifth. That put Dylan Ferrandis  in third, not far behind Forkner. They both passed Martin on the third lap.  Michael Mosiman had been running about seventh, but he went down hard, taking a number of riders with him, including Jacob Hayes and Cameron McAdoo. Mosiman was slow to get up, and eventually retired to the pits.  Forkner and Ferrandis seemed evenly matched for most of the race, with about four or five bike lengths between them. Meanwhile, Martin was slowly dropping back and Cooper was slowly moving forward. In the second half of the race, Ferrandis stepped it up and forced his way past Forkner, who went off the track. Once out front, Ferrandis gradually stretched it out. The best battle was then between Martin and Cooper for third, with another match up between Luke Clout and Brandon Hartranft for fifth. Hartranft passed Clout with three laps to go. At the same time, Cooper moved into third, pushing Martin back another place. Dylan Ferrandis won with a small lead over Forkner and Cooper, taking the red plate lead by 2 points.