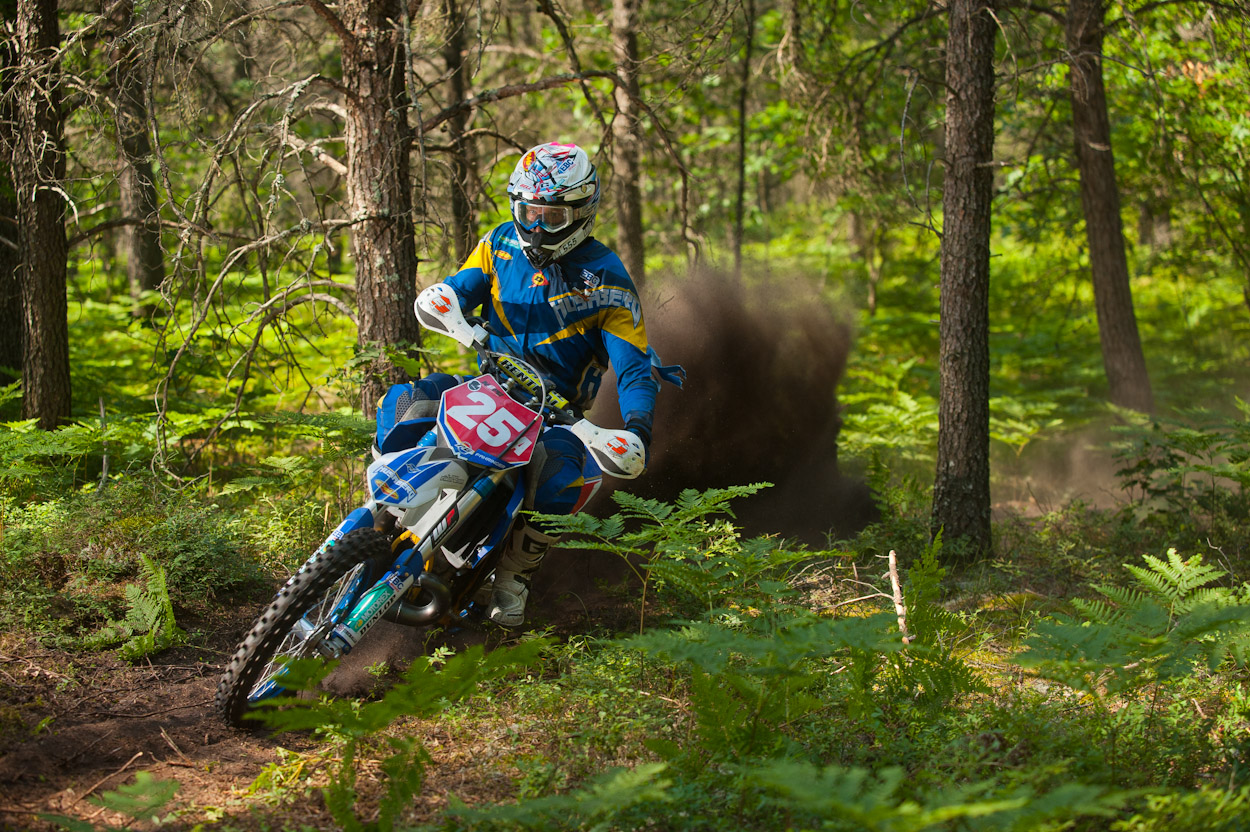 Nick Fahringer won his first National Enduro, and did it on a Husaberg 300 2-stroke.
photo by Shan Moore
Moorestown, Michigan, July 17, 2011 – Nick Fahringer claimed his first-ever national victory at the Jack Pine Enduro in Moorestown, Michigan, round seven of the Rekluse/AMA National Enduro Series. Riding a 2012 Husaberg 300cc two-stroke for the first time in Enduro competition, Fahringer edged three-time series champ Russell Bobbitt for the win by a 10-second margin over the tight and demanding 70-mile, six-section course.
Bobbitt and FMF/KTM teammate, Charlie Mullins, who was also riding a two-stroke in Enduro competition for the first time, got off to quick starts, with Mullins winning the opening test while Bobbitt was fastest in the second. However, Fahringer made his move in test three, turning a time that was 29-seconds faster than Bobbitt and 51-seconds faster than Mullins.
Fahringer also won the fourth test and tied Bobbitt for the fastest time in the fifth test, so from that point on it was a matter of keeping it on two wheels for Fahringer, as the Indiana rider held off a late race charge by Bobbitt in the final test.

In the final five-mile test, Bobbitt made up 17 seconds on Fahringer, but it would end up being 10 seconds too few, as Fahringer took the win, followed by Bobbitt and Mullins.
“It’s kind of a little bit of relief to get my first win,” said Fahringer. “I felt I’ve had the speed this year and I knew I would finally get it. It’s more a feeling of satisfaction than excitement. For some reason I thought I might do it today and I just had a good ride.”

Mullins took the final podium slot and is running half a dozen points behind in the series chase.

FMF/KTM’s Cory Buttrick also switched to a two-stroke for the Jack Pine and came away with a fourth, while eight-time national champ Michael Lafferty made it five two-strokes in the top five by finishing fifth.

Bobbitt extended his lead in the series standings to six points over Mullins with his runner-up finish, and heads into the Pennsylvania round in two weeks with a total of 177 points to Mullins’ 171. Buttrick sits third with 142 points, as Fahringer moves into fourth at 138.