FACTORY MACHINES OF MONSTER ENERGY SUPERCROSS: LOOKING BACK AT 2018 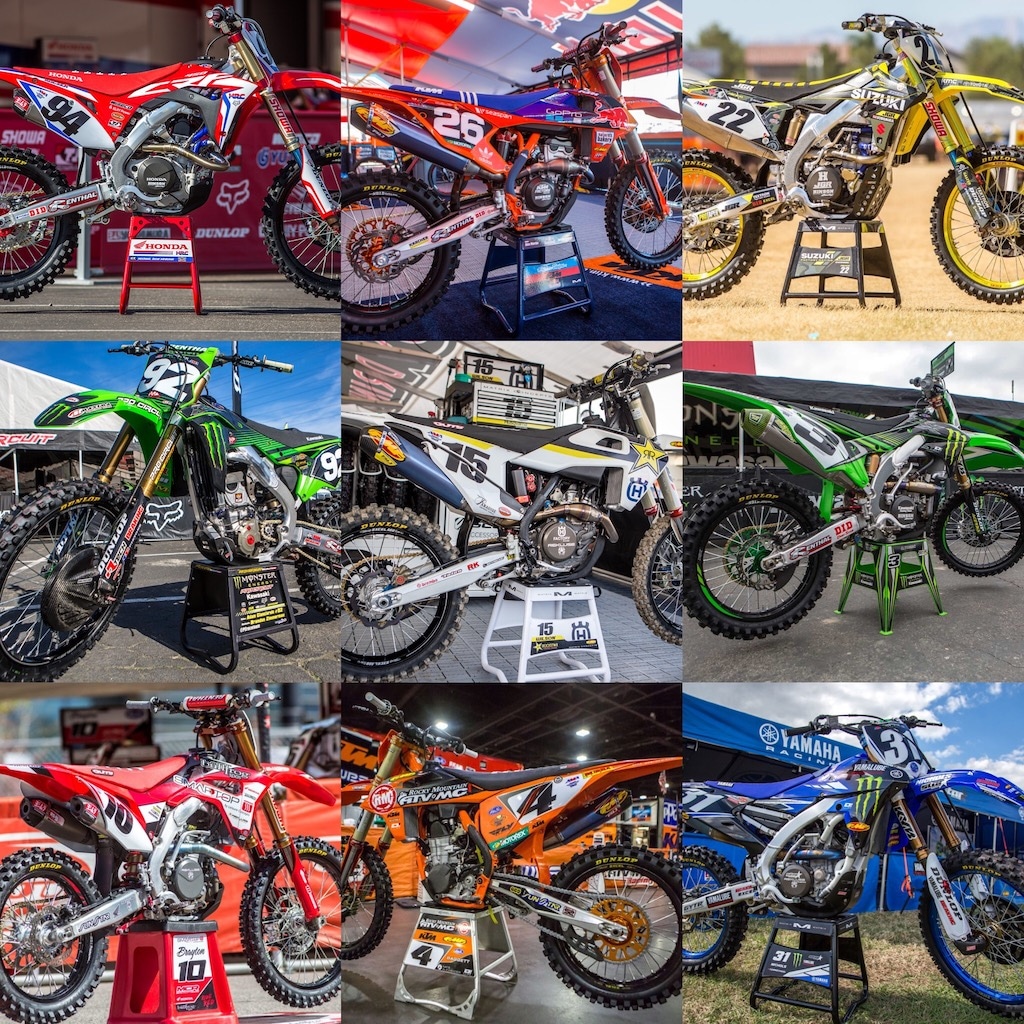 With the Monster Energy Supercross season opener just around the corner we decided to take a look back at some factory SX race bikes of 2018. Our resident SX expert Travis Fant went beyond the velvet ropes during the 2018 Supercross season talking to each riders mechanics getting all the details about parts used and personal rider set up tricks. Here is a look at Ken Roczen, Adam Cianciarulo, RJ Hampshire, Justin Brayton, Colt Nichols, Eli Tomac, Blake Bagget, Alex Martin, Chad Reed and Dean Wilson’s factory race machines from the 2018 SX season. Click on each image for more information and the complete uncensored story.

We got in the van and headed east from our offices in Valencia, California to Glendale, Arizona for Round 4 of the Monster Energy Supercross series. Mechanic Oscar Wirdeman was nice enough to walk us around Ken Roczen’s Honda CRF450R and show us some of the trick parts they’ve thrown on it. Roczen heads into 2019 in a much better place all around than 2018 and we are very interested to see how different is race bike is.

Pro Circuit has always been known for their race-inspired products and for spending countless hours at the test track to further develop their bikes. The final product that shows up to the races is an engineered work of art and worth gazing over. We caught up with Brandon Zimmerman (@zimm763) in the pits of Oakland to get all the details on Adam Cianciarulo’s Factory Kawasaki KX250F. With the 2019 KX250 not changing much look for Pro Circuit to have a refined package of Adams 2018 machine.

Chad Reed has been on the move during the off season. He sold his property, tested different brands, and eventually landed a spot at JGR Suzuki. Chad is looking very lean and fit compared to a year ago. Could we see the veteran racing up front this season? Only time will tell. Ben Schiermeyer took some time with us at Sam Boyd Stadium and gave us all the details on Chad’s race machine. We expect to see Chad on a very similar machine at A1.

Inside the pits of Troy Lee Designs KTM sits the #26 of Alex Martin. After a get off in Anaheim, Alex decided to sit out of Houston and heal up. We took the opportunity to meet up with Mechanic Jordan Troxell (@jordantroxell) and have him walk us through Alex’s TLD/KTM 250SXF . Alex will be on a JGR Suzuki and Jordan will be a mechanic on the factory HRC team in 2019.

In 2017 Dean Wilson was sitting in Anaheim with a box van, a bike on a budget, and no clue as to what his plans would be after a couple rounds of racing. By the time Oakland came around, Dean had picked up a ride at the Rockstar Racing Husqvarna team. Now in his sophmore year with the team, Dean is eager to put his Rockstar Edition FC450 on the podium and run with the fastest in the 450 class. We caught up with his mechanic Daniel Castloo to see how Dean has adjusted to the new model. Here is what he had to say…. Dean will again be a semi-privateer in 2019 but it looks like he will be on a Husky again.

Yamaha hit the east 250 series hard with a podium finish in Dallas last weekend so we decided to catch up with Star Racing Yamaha and mechanic Trevor Carmichael in Tampa to get an inside peak at Colt Nichols Yamaha YZ250F. Yamaha made huge changes to the 2019 YZ250F making it better off the showroom floor we are interested to see what Star Racing can do with the new bike.

We caught up with mechanic Nathan Alexander under the tents of Factory Rocky Mountain/ATVMC to get an in-depth look at Blake Baggett’s KTM 450SXF prior to Saturday night in Atlanta. This bike is littered with factory components from KTM, but closer to stock than you may think when passing by. Blake will return the RM team for 2019.

Dirt Bike Magazine headed down south to one of the most unique tracks on the circuit. Daytona offers a Supercross race with an outdoor twist. Mechanic Keith Clickstein at Factory Connection/Geico Honda sat down with us and laid out the details on RJ Hampshire’s race machine.  Honda made minimal changes to the 2019 model so look to see RJ on a model similar to his 2018 machine.

After watching Justin Brayton become the oldest racer to win a Supercross in Daytona, we’ve been itching to get over to the Smart Top/ MCR rig to get an in depth look at his motorcycle and see what got him on the top of the box. Mechanic Tony Berluti was gracious enough to spend some time with Dirt Bike Magazine and show us the bits and pieces of JB’s Honda CRF450R. Justin returns to the Smart Top/ MCR team fresh off another Australian SX championship.

We were fortunate enough to spend some time shooting photos & video of Eli Tomac’s Monster Energy 2018 Kawasaki KX450F and sit down with his mechanic Brian Kranz to hear about all the trick goodies the factory team is running for 2018. Eli returns to Kawasaki for 2019 with an all new machine and is the man to beat!