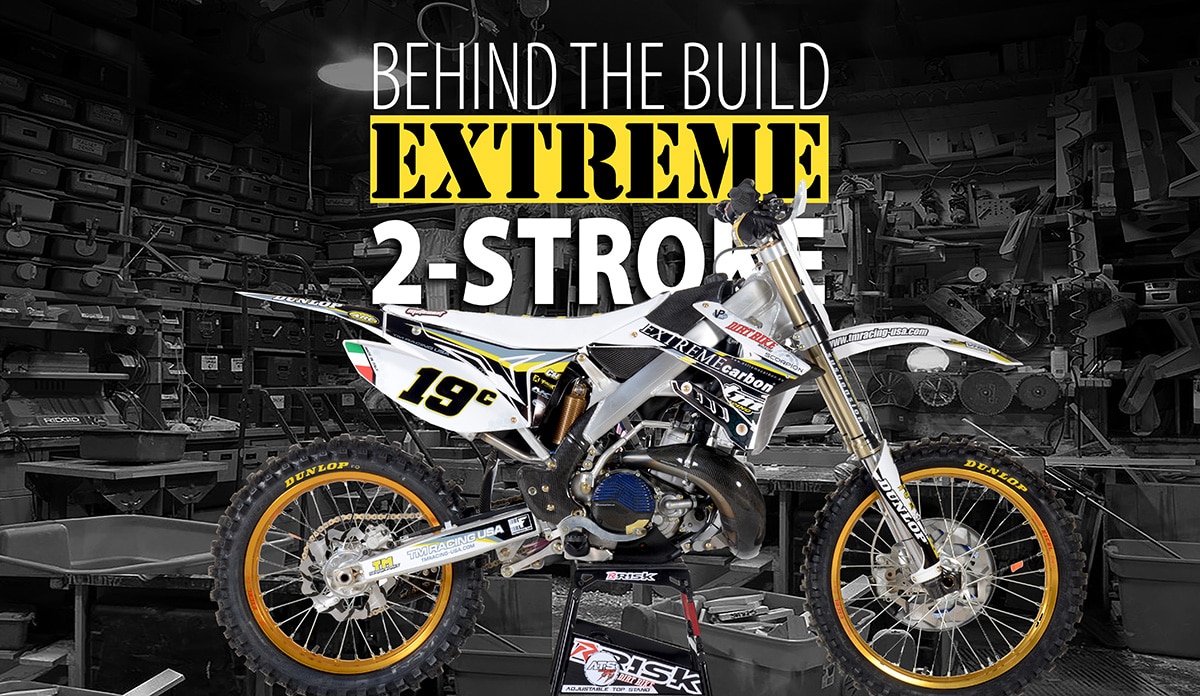 The TM 250 is like no other bike in the world. It’s the closest thing to a handmade factory works bike that the general public is allowed to purchase legally. The technology used to build this machine comes straight from research and development on the GP circuit in Europe. This can be a blessing and a curse in the way that new technology is always being presented to the public, but bad because the aftermarket manufacturers don’t have time to make products for it. The crew at TM Racing USA is changing all that, and this project proves it.

BUILDING SOMETHING DIFFERENT
The U.S. market is unlike any other market when it comes to building motorcycles. A huge part of our market is aftermarket bolt-on performance items, and there is a long list of companies to choose from, with items made 100 percent right here in the U.S. or with items developed in the U.S. and made elsewhere. The one major component to making this all happen is that all of the major manufacturers have bikes readily available to these companies for design and developing their products. Until now, smaller brands made elsewhere in the world have struggled in this department. Ralph the owner of TM Racing USA is investing huge time and resources into changing all that for his brand in the U.S. and around the world.

As we said before, the TM 250 is very unique to the motocross market, and that is apparent upon first glance. It’s the only 250cc two-stroke in the MX class to come equipped with an electric starter. Other features include sand-cast cases, a hydraulic clutch, Moto Tassinari V-Force reed cage, ignition that has two preprogrammed maps that can be changed on the fly via a handlebar-mounted switch, HGS pipe, and that’s all just the engine.

For this reason, we didn’t make any internal changes to the engine. So that means no aftermarket clutch, cylinder porting, head milling or stroker rods—everything is how it rolled off the TM assembly line in Italy. Well, we did change the jetting to run VP race gas. We did add a complete Pro Circuit exhaust with a works-style expansion chamber and Factory Sound 304 silencer. TM Racing USA worked closely with Pro Circuit to develop the exhaust specifically for the TM 250/300 MX and off-road models. 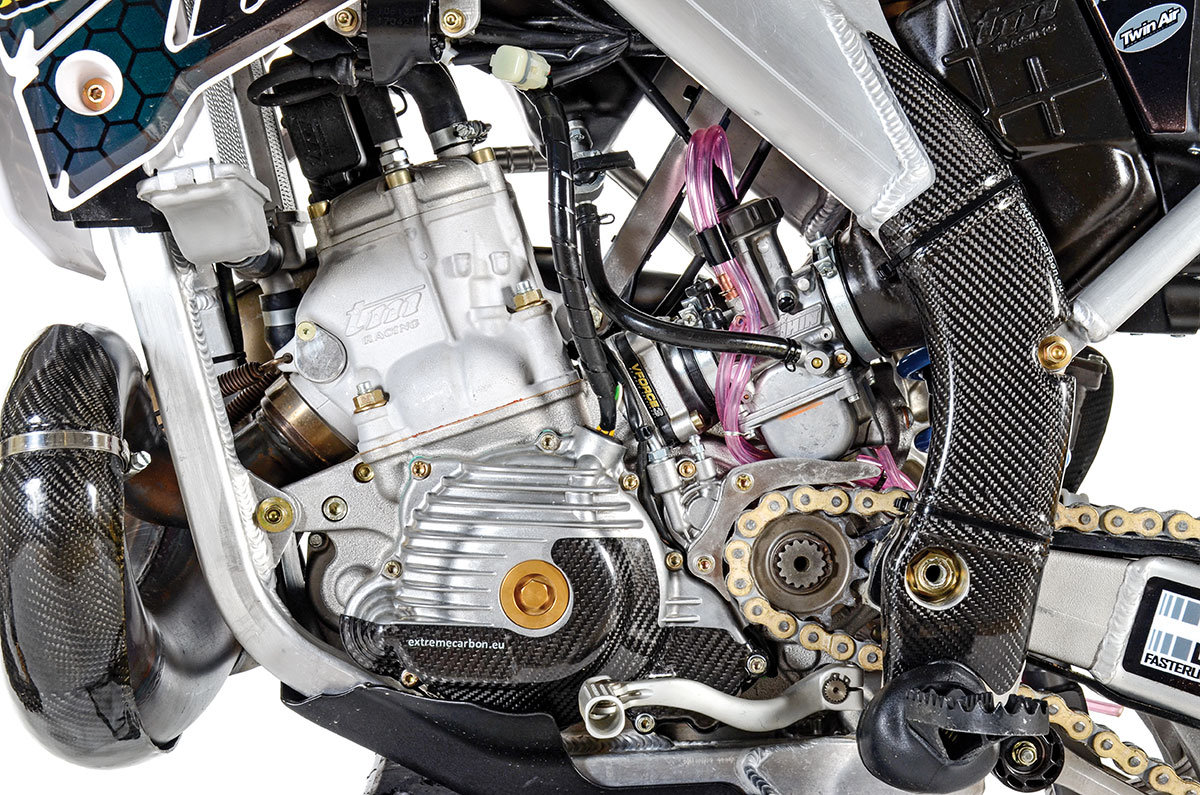 Extreme Carbon (based in Portugal) is a huge part of this project, and their products are everywhere! The engine is adorned with a clutch cover, ignition cover guard and a pipe guard. The chassis features a rear mud guard, frame guard, fork guards and front rotor guard—and no, that’s not a real carbon fiber tank; it’s just a slip-on cover. The complete line of Extreme Carbon parts for TMs will be available through TM Racing USA. The Neken SFH handlebars have a carbon fiber overlay, staying in line with the trick-looking theme of this build. 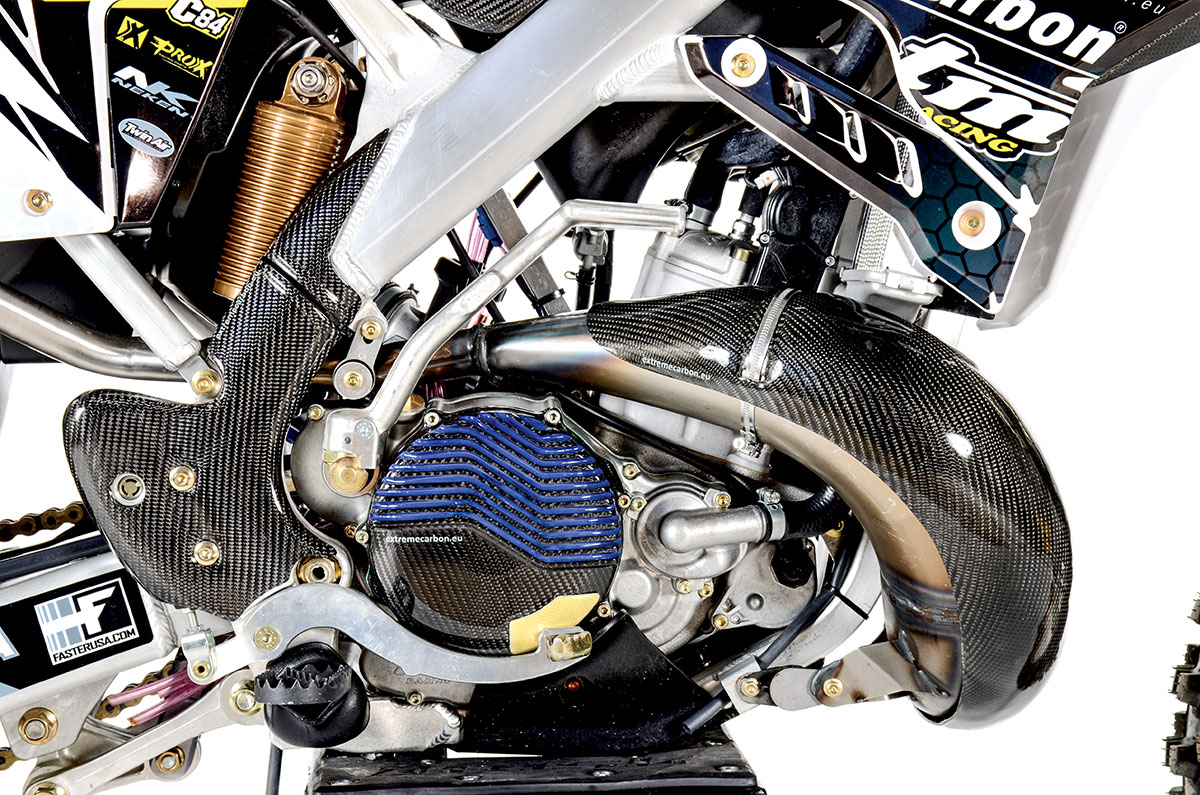 The chassis did get some major attention that came in the way of a complete wheelset from Colin and the crew at Faster USA. They feature five-axis machined hubs from heat-treated, 6061 T6, U.S.-certified, billet aluminum that’s been clear anodized for extra protection, stainless steel spokes, and nipples with gold Excel Takasago rims. We then wrapped them with brand -new Dunlop MX33 tires on both ends. Lainer Suspension handled customizing the suspension for us. The TM 250 comes off the assembly line with Kayaba (KYB) front forks and a shock that is made completely in-house at TM’s manufacturing facility in Italy. KYB components are mainstream, so changing out valving and springs is pretty straightforward, but the shock only comes on TM models, so it can be a little tricky. With this being a motocross build, we went with a slightly stiffer setup than normal, but still made it clear we wanted a plush feel. Other bolt-on items included a Pro X steel rear sprocket, TM Designworks rear Factory Edition chainguide, ARC folding levers, Motoseat custom gripper seat cover and Galfer brake rotors.

SUM OF ALL ITS PARTS
This TM 250 build looks even more factory than their actual GP factory bikes in Europe. So, if we rate the build just on looks, it’s a success. Well, as you know, that’s not how we do it here at Dirt Bike. We are really surprised with how different the power is from the stock model, especially because all we did was change the exhaust. The new Pro Circuit pipe and silencer combo might rob a very slight amount of torque down low, but the gains up top are impressive, making it a little more fun to ride. Lainer worked some magic on the suspension, somehow finding a good compromise between stiff enough so we didn’t blow through the stroke right away and plush enough that we wanted to burn premix all day long. TM Racing USA is making customizing a reality for their machines, and we think that’s a step in the right direction for future growth of the brand.