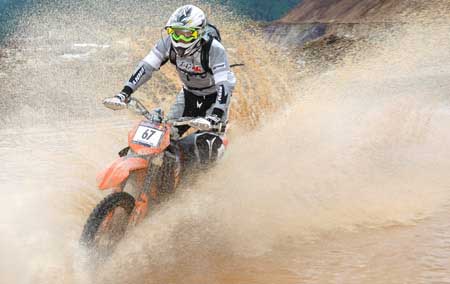 Gilles DeJong wins the first trophy at the Erzbergrodeo 2009
The Erzbergrodeo kicked off with a surprising result on the very first day of the unique event. Belgian KTM fmx4ever Factory Freestyle-Motocrosser Gilles DeJong won the Rocket Ride Superfinals in front of an enthusiastic crowd of thousands of Motorsports fans.

300 riders challenged the mighty, three story uphill-section today and offered supreme offroad action to the spectators alongside the track and in the Erzberg-Arena, where thousands of people could witness the racing efforts of riders from 33 different nations thanks to the Erzbergrodeo-TV service on two huge videowalls.

DeJong proofed that even FMX riders know exactly how to go wide open and went straight through the Qualifiers into the main event on Thursday evening. Gilles toughest competitors could not be find amongst his factory-rider colleagues like Cyril Despres, Chris Birch, Andreas Lettenbichler or Darryl Curtis – it was a young Austrian Motocrosser Seppi Fally who actually dominated the 500 meter long uphill section. The Kawasaki mounted rider let his bike fly over the track like no one else and reached the Superfinals without a doubt.

The line-up of the final race also featured KTM factory rider Chris Birch (NZL), BMW’s Andreas Lettenbichler (GER), KTM Freestyle-MXer Nick Franklin (NZL) and Austrian rider Herbert Lindner. Right after the start Fally took the lead and hammered his KX450F towards the peak of the track, closely followed by DeJong, Lettenbichler and Birch. After Seppi Fally made a slight mistake in the last third of the race, the road to victory was open for Gilles DeJong, followed by Andreas Lettenbichler and Chris Birch.  Offroad-Superstars Dougie Lampkin (UK), Paul Bolton (UK), Jade Gutzeit (RSA) and Darryl Curtis (RSA) couldn’t match the speed of the finalists today, while KTM’s Taddy Blazusiak had to withdraw from the new Erzbergrodeo side event because he would not risk his foreseeable hattrick at the Red Bull Hare Scramble on Sunday.