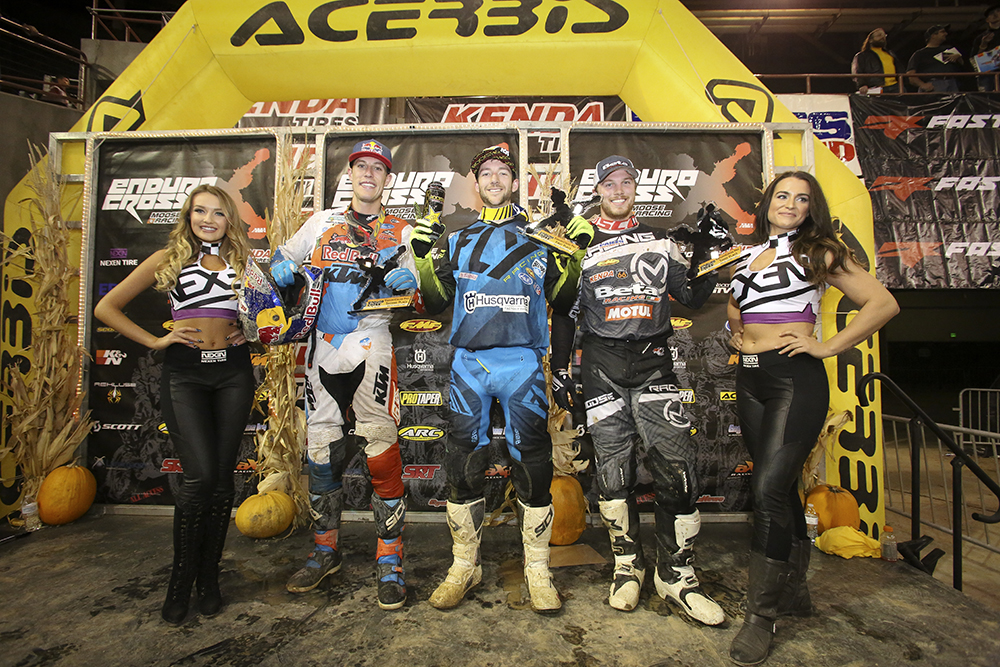 Webb and Redmond round out the podium

The Penultimate round of the 2016 AMA EnduroCross Championship took place inside the Ford Idaho Center and Husqvarna’s Colton Haaker came out on top of a wild main event. KTM’s Cody Webb salvaged a second place finish despite two violent crashes to keep the championship chase alive with one race remaining. Beta’s Kyle Redmond led several laps in the main event and finished a solid third.

Webb, Haaker and SRT racing backed Cory Graffunder won the three heat races to earn a bonus championship point each. Graffunder’s win was particularly exciting as he came out on top of a multi-rider tussle for the win when Mike Brown crashed right in front the finish line. When the top two finishers from each of the three heat races squared off for the evening Hot Lap, Haaker earned the bonus point and first gate pick for the main by beating what Webb despite what looked like a solid lap from Webb.

When the main event started, Haaker took the $500 Nexen Tire Holeshot award while Webb went down hard and got run over by several riders. Haaker looked set to walk away with an easy win but got stuck in the firewood pit at the start of the second lap and lost a couple of positions. Redmond took over the lead and held it for five laps as Haaker worked his way back to second but struggled with the firewood pit nearly every lap.

Haaker worked his way past Redmond for the lead on lap six and pulled a small lead but continued to struggle with the firewood pit. Webb got up from his first turn crash well behind the field but started methodically working his way through the pack. He was able to pass Redmond for second on lap seven and then closed in on Haaker to keep the race exciting all the way to the finish. Haaker managed to keep it together to take his fifth win of the season while Webb showed his toughness to take second.

Redmond had a close call when he landed on a log midway through the race and bent his footpeg up. Despite that, he held on to take his first podium finish of the season.

“I got the Holeshot and was riding really good but got stuck the first six laps.” Haaker said. “I saw Cody crash several times and he was going down hard and still managed to catch me because I was getting stuck in the firewood but I have been on the other side of that. It felt good to get another win.”

“In the beginning I almost wasn’t going to keep going.” Webb said. “I took a big digger and got run over but I realized I was not seriously hurt. Then I crashed again from the top of the rock pile so my bars were bent but I gave it my all to get back up there.”

“Everything was good today, I was fastest in the afternoon hot lap, led some laps in the main and finished up with a third place, so that was a great day,” Redmond said. “I was riding with a really bent footpeg for the second half of the race so that made it difficult but I held on for the podium.”

Canada’s Trystan Hart put in another amazing race to finish forth on his Husqvarna. Graffunder rode a consistent race to take fifth on his KTM. Husqvarna backed Brown took sixth position, just ahead of RPM KTM’s Ty Tremaine. Those two are in a tight battle for third in the championship. Beta’s Ty Cullins finished eighth after showing good speed all day long. Geoff Aaron finished ninth on his GasGas. Noah Kepple rounded out the top ten on his KTM.

Nick Thompson and Cooper Abbott finished eleventh and twelfth. Five time champion Taddy Blazusiak was credited with thirteenth after he pulled off after a big crash during the main event.

The final round will take place in Ontario, California at the Business Bank Arena on Saturday, November 19th. Tickets are available at: www.EnduroCross.com/buy-tickets/