ELITE HUSKY DUAL-SPORT: BEHIND THE BUILD 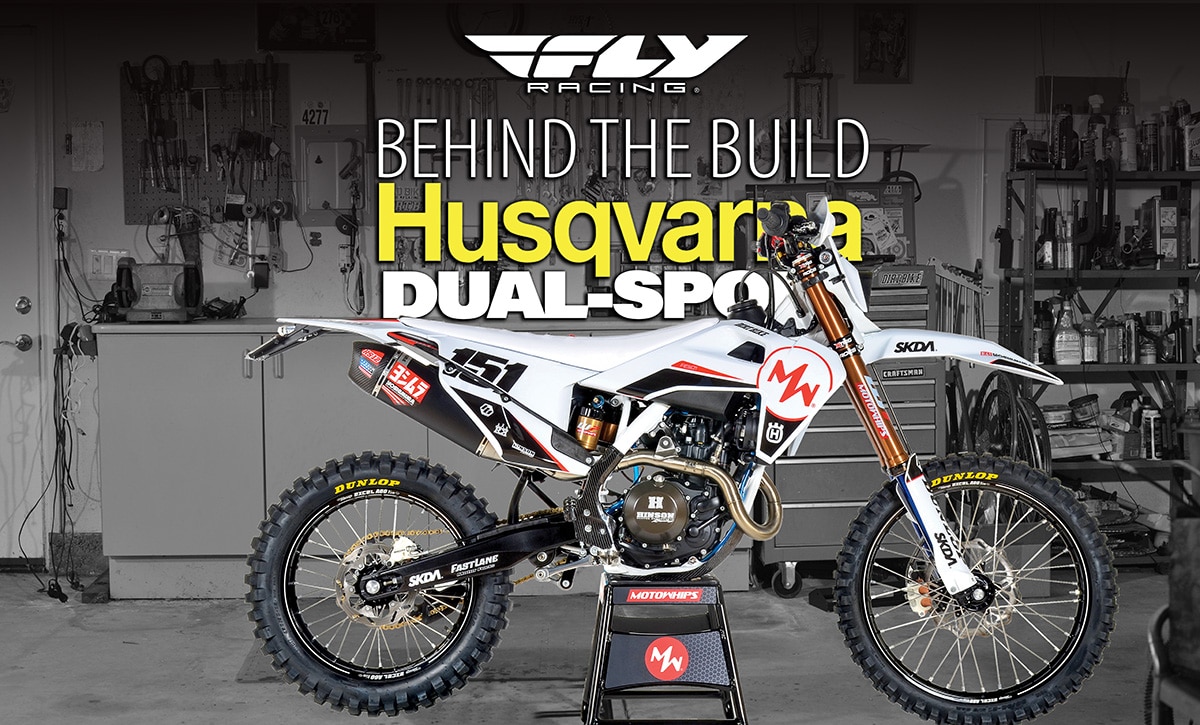 We have featured many project bikes built by Motowhips in the past, and all have been very unique machines, but this Husqvarna FE501 build is a little different. This bike is not only built by Justin Myerson and the Motowhips crew, but it is actually owned by Justin himself. How much attention does a build get when the boss man owns it? Well, hold onto your hat, because we are about to find out!

With a shop bike, style is half the battle, and the Motowhips crew never comes up short on style. The Husqvarna 501 was almost brand new when it rolled into the shop, but it was completely torn down just like a full restoration project. Husqvarna changed up the color scheme on the 501 a few times in recent years, but Motowhips decided it was in need of an all-new combination. The engine would receive major attention inside and out. You notice right away the engine, top to bottom, was ceramic-coated black. This not only gives the build a unique look, but also helps with heat dissipation. It goes without saying that this process alone takes insane amounts of man-hours. More on the internal modifications later.

The next step was the powdercoat applications to the main frame and swingarm. White was chosen for the frame, just like the factory SX race machines and the aluminum swingarm got an all-black finish. Motowhips always puts in the extra effort; instead of leaving the radiators the raw aluminum color, they matched it to the black ceramic coating of the engine, making everything flow together rather than standing out like a sore thumb. The bulky OEM license plate holder and lighting kit in the rear was removed entirely and replaced with a minimalistic configuration from Motowhips, with the wires being rerouted for a clean look while getting rid of a substantial amount of unnecessary weight.

Upgrades in performance are not regulated to just more overall power on this build—although that was also achieved through a new intake configuration, new electrical components, Hinson Racing clutch internals, complete Yoshimura exhaust system and a few other Motowhips internal modifications. (Make sure to check your state’s laws on legalities of modifications.) The OEM wheelset was replaced with a set using Kite billet-aluminum hubs anodized black, stainless steel oversized spokes and a set of Excel A60 black rims wrapped in Dunlop’s 606 dual-sport tires.

A common area overlooked when it comes to upgrades on dual-sport machines is lighting. On this build the OEM headlight was replaced with a unit from Baja Designs that puts out huge amounts of light while using all the stock plug-in connections and doesn’t require any additional charging equipment. Husqvarna equips the FE501 with XPLOR suspension components, so the crew at Motowhips didn’t just coat the OEM components, they upgraded to WP Pro components with Cone Valve technology and then went crazy with performance coatings on both ends.

We really enjoy working with bike builders like Justin and his crew at Motowhips for many reasons, but most of all, we just want to see what they are going to come up with next. This Husqvarna 501 build, eventually named “Storm,” is a perfect example of that theory. They took a stock dual-sport, changed the look completely with specialty coatings throughout, upgraded the suspension inside and out, then made sure to increase the overall engine performance. Most people would stop there and call it a day, but not the Motowhips crew! Xtrig clamps, upgraded Baja Designs lights, Kite Excel wheels, Dunlop tires, Yoshimura exhaust and carbon fiber protection pieces took the build to another level. All-white plastics and a very clean custom graphics kit from SKDA really makes this 501 pop.

One major problem we have with just about every Justin Myerson/Motowhips creation is that they always look so good, when finished, we don’t want to be the person who gets them dirty! Of course, that feeling goes away quickly. After all, we have a job to do.