Trials riding is almost like gymnastics on a motorcycle, and it requires a specific skill set to get over obstacles. In general, sheer speed is not one of the required skills. The idea is to always keep your feet on the pegs. Electric Motion gave us their base-model electric trials bike to test, the ePure. This is their “ultimate trial playbike,” a lightweight machine with excellent suspension, brakes, and manners mated to a powerplant with three power modes, traction control, and a progressive regenerative brake. This is actuated at the left-hand lever (normally, the clutch) and slows the rear wheel and charges the battery when engaged. We enlisted the help of Lane Leavitt and his son, Daniel, to help with our testing. Lane is a former multi-time national observed trials champion. He’s been testing the bike at his personal trials compound, so naturally we stopped by to get some seat time and pick his brain. We were able to get a legitimate trials session in, which after all is what it was designed for. 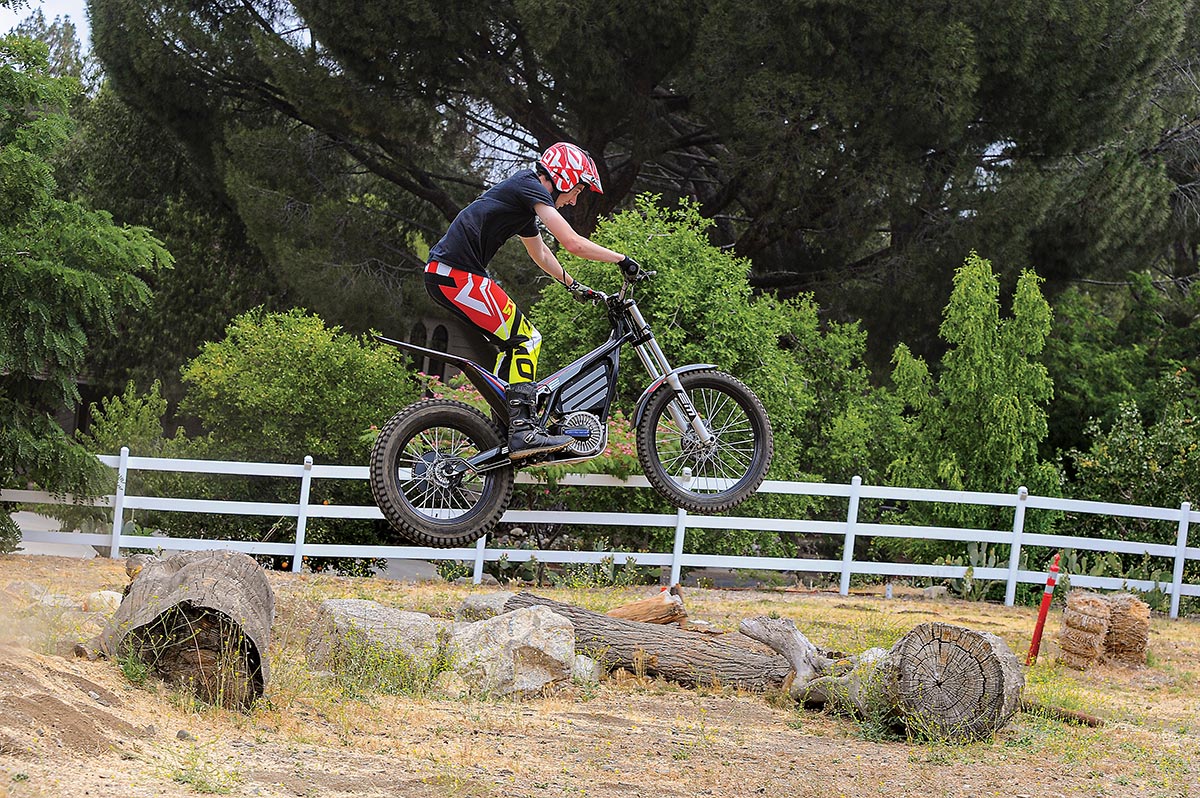 We were immediately briefed by Lane and Daniel, who had been getting to know the bike for a few weeks. It’s one thing to ride an electric motor on the road or even an e-mountain bike, but this felt like we were experiencing the beginning of a new era.  In Lane’s words, “Riding electric is a big switch from gasoline-powered motorcycles, so indeed there is a learning curve, simply because the power is more like a light switch. It’s on and off, unlike a gasoline engine that revs out slowly and has a flywheel-effect ramp-down after letting off the throttle.” Traditional trials bikes are known for being quiet, but with the ePure, there’s no chance anyone will hear you, even if they are standing next to the bike. Plus, you’re not spending any time trying to keep it idling. The motor comes with three power modes, and switching between them came in handy even for some technical things we tried. You’ll get 600 N/m of torque, and the delivery of power is obscenely smooth and immediate.

Here’s Lane assessment on the power: “I started on the least powerful setting because, honestly, it’s got way too much horsepower for the average person, then I slowly moved up. The bike is a powerhouse of torque, to say the least, but this is a good problem to have, because it’s easier to make less power than more power, and de-tuning the power is easier than trying to create more as a manufacturer. So, electric power sure has the edge here over gasoline engines.

If you thought the seat was missing at first glance, you were right, but not to worry, it’s normal for trials bikes. No seat allows a rider a wider range of movement on the bike, but they have comparable models with a seat. The seat models are extremely capable, and maybe even just as good for the average rider wanting nothing more than an easy trail ride. A dedicated trials course gave us the opportunity to try the same obstacles we would try on a gas-powered bike. The first thing we noticed was that, ergonomically, the bike felt very similar to a standard trials bike. At 162 pounds, it’s just a smidge heavier than the average 300cc two-stroke bikes. Basic trials maneuvers, like static balance and tight turning, felt as good as the gas bikes we’ve tested. Slow, balanced wheelies are almost easier than traditional bikes because you don’t need the clutch at all. There is more than enough power if you can control it with a talented throttle hand. Lane said, “The feel is like riding a centrifugal clutch motorcycle without an engine ticking over. The rider must keep the throttle open through the rocks or uphill; otherwise, the bike stops. Then it’s hard getting going again. This, of course, takes some adjustment for the experienced riders, to say the least, but for a new rider, it may not matter. The other big advantage is that it will not stall like a gasoline engine, so it’s great for beginners.”

Electric Motion has a 15A charger that charges a fully depleted battery to full capacity in 3 1/2 hours. You can purchase a 25A charger that EM claims will get you fully charged in just over two hours. We were all impressed that after a solid-hour riding session we were only down about 15 percent. At that rate, it would be more than the average guy would even want to ride in one shot. You will need to keep the battery in the bike at all times, which means the charger will need to be in a spot that is convenient to park the bike.

Minimum maintenance is required for electric bikes in comparison to combustion engines. No more getting oil or gas on your hands, and best of all, no one will hear you riding. Backyard sessions in thick neighborhood settings could help more people get the practice they’ve been wanting. Not having to shift or use the clutch are inviting features that are inclusive to a wider range of folks. Lane said, “What is awesome is there are no air filters to clean, no oil to change and no engine maintenance. This I don’t mind at all and can adjust to really quickly.”

LANE LEAVITT’S BOTTOM LINE
“Can I ride the gasoline-powered motorcycles better? I can! But, the advantages of the electric motorcycle for access to riding areas cannot be overlooked. It’s almost silent and allows the rider to sneak around in places a gasoline-powered motorcycle could never get away with. This is why this machine is so much fun! This model is not the competition R model, it’s really made for fun in the backyard, or easy adventure riding around the neighborhood or local woods. But, with every session, I become more and more at home with this electric power, and this machine is amazing for this purpose in my opinion.”

Lane is really looking forward to testing the “R” model, which has a normal clutch and a “tick over” mode, which is an idle feature for the motor. He said, “It’s my opinion that electric motors are the future of trials competition. There are just too many possible advantages to overlook an all-electric future for the sport of trials.”