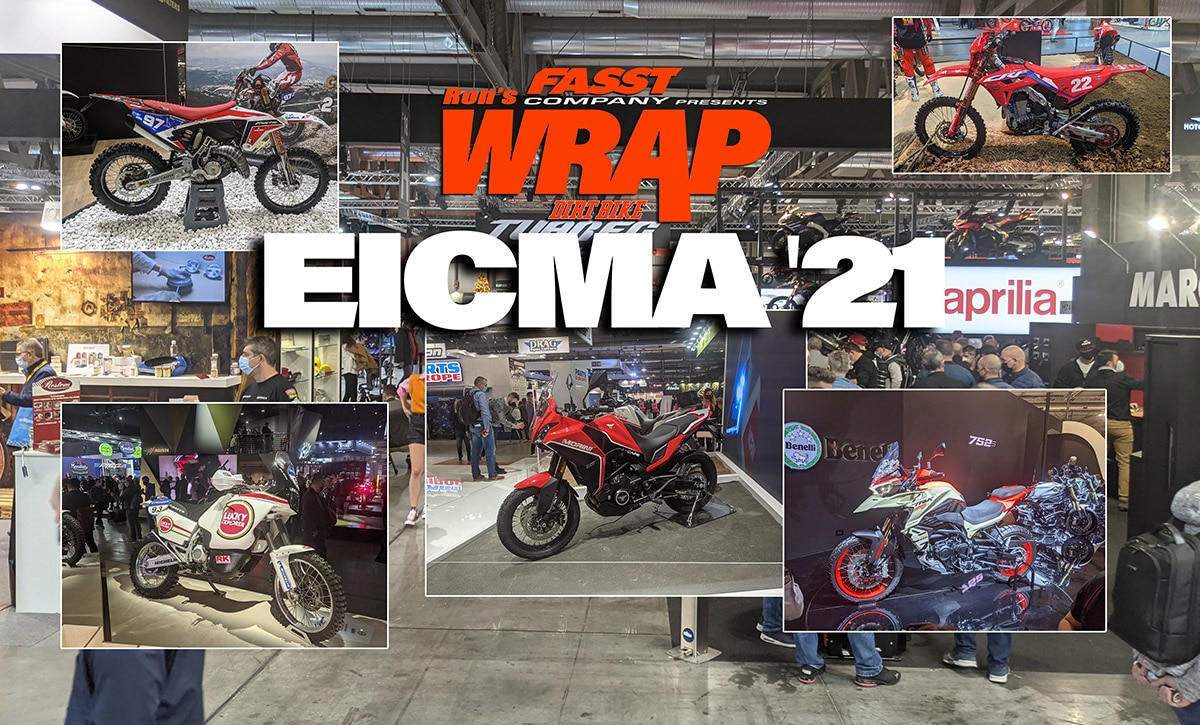 The 2021 EICMA show in Milan, Italy was a party celebrating the beginning of the end of the weird season of Covid. In the past, we have thought that the end was in sight again and again, but with so much of the world motorcycle industry in one place resuming business, the vibe at EICMA felt genuine. Supply lines are opening up and and companies feel the need to show the products that they can, for the first time in a long time, bring to market.  We got to experience EICMA 2021 thanks to the Italian Trade Agency and we are delighted to share some of the sights from the floor at Milan. 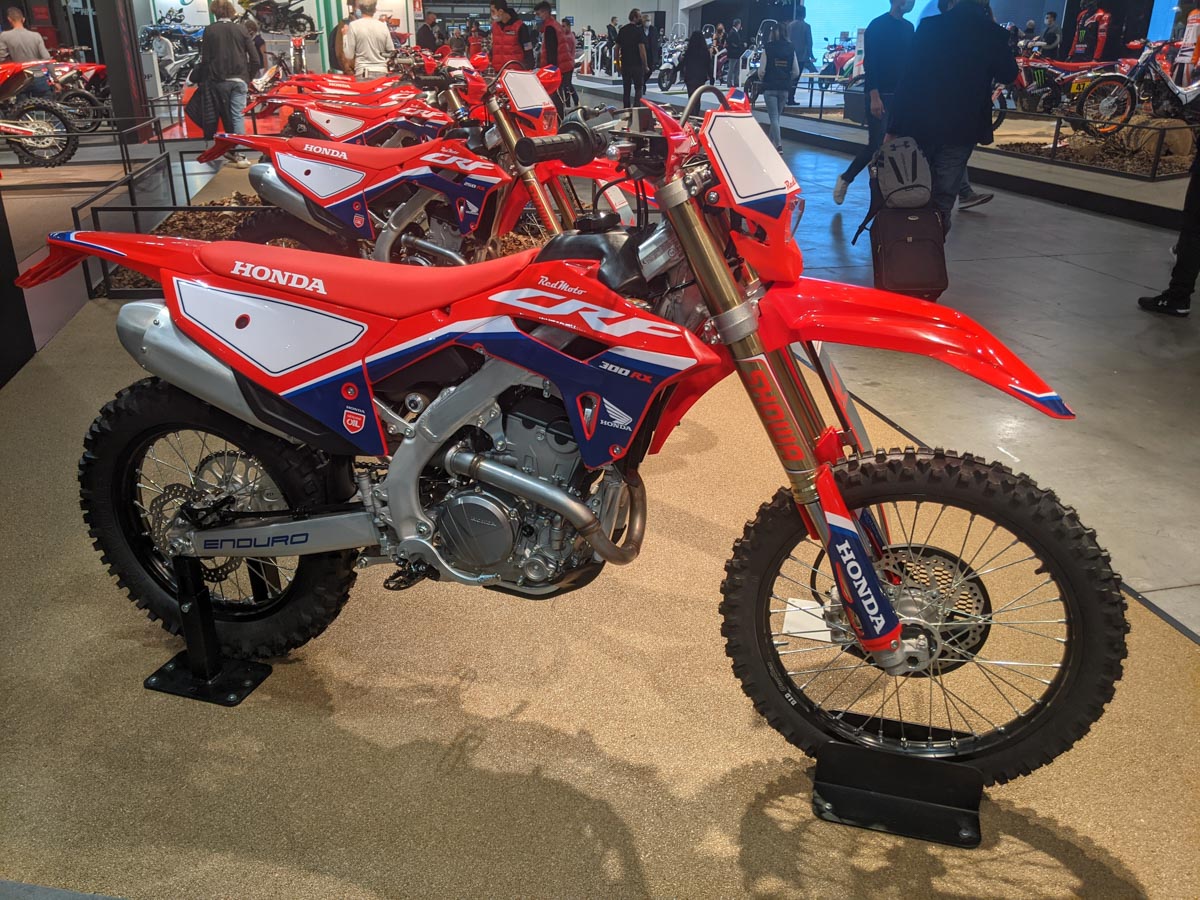 The Red Moto CRF300RX is a street-legal version of the CRF250RX that is put together by the Italian Honda importer. At the core of the transformation is an Athena 297cc big-bore kit. You can get all the parts to make one for yourself in the U.S. 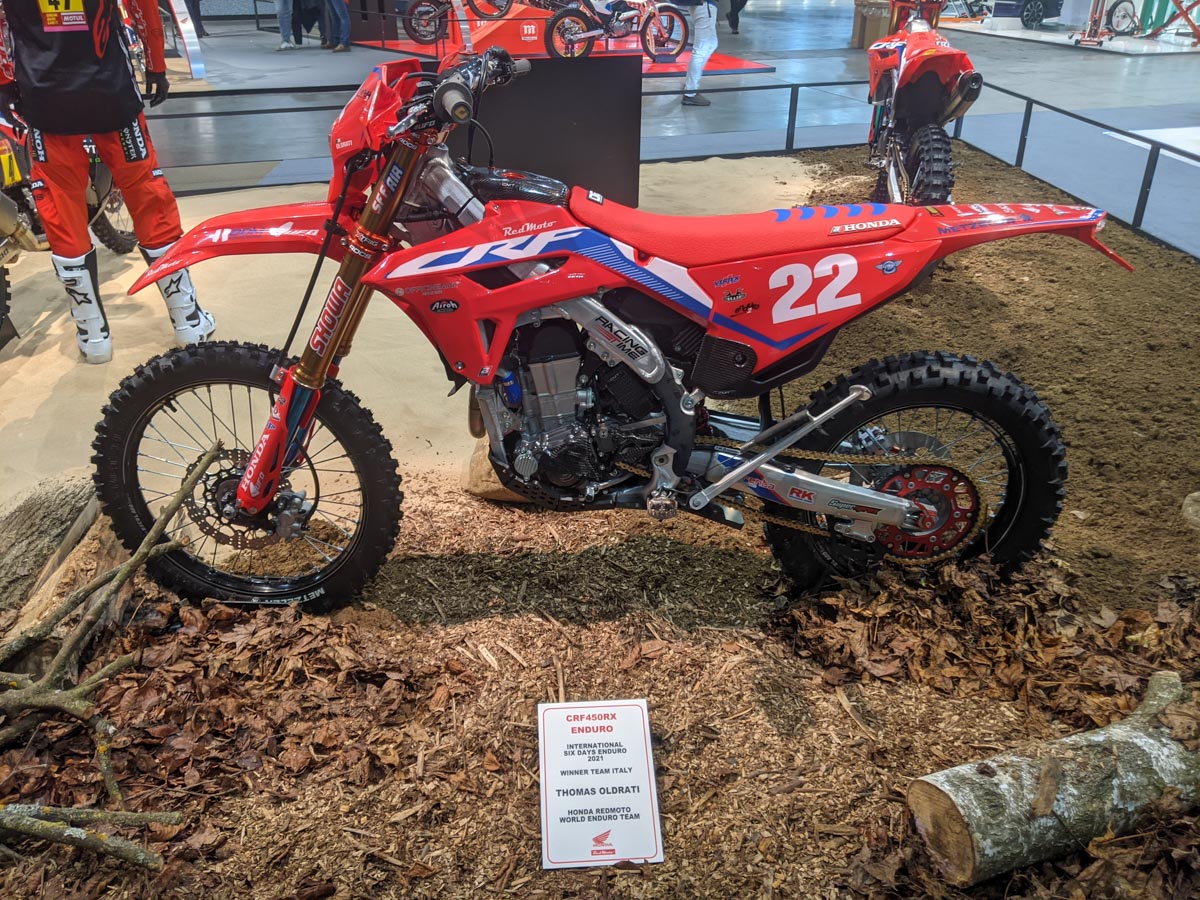 There’s also a Red Moto CRF450RX. This one was used by Thomas Oldrati on the winning Italian Trophy Team at this year’s ISDE. 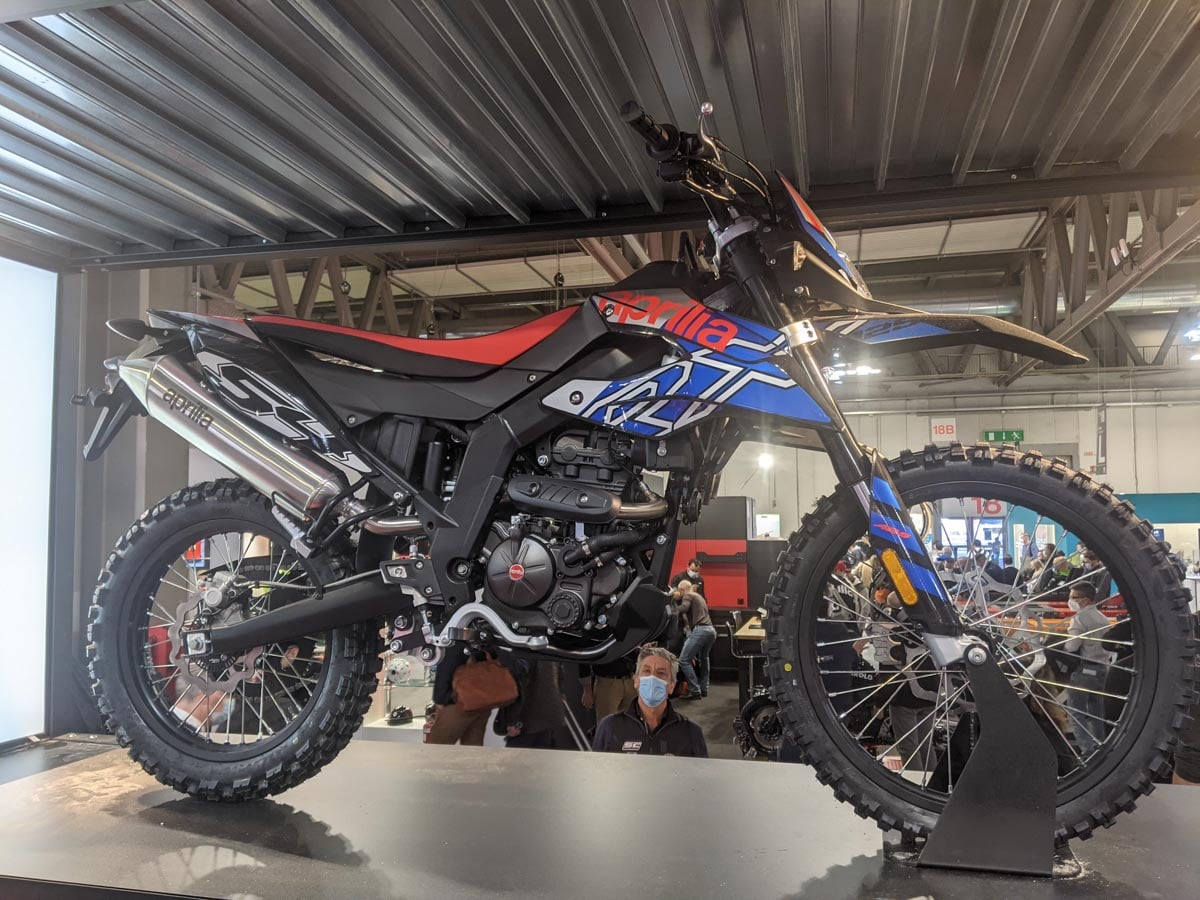 Europe has a big market for street-legal 125 four-stroke off-road bikes. The Aprilia is typical of them. It’s doubtful that it will ever be imported to the U.S.. Beta tried, but found that the U.S. homologation process drives the price too high. 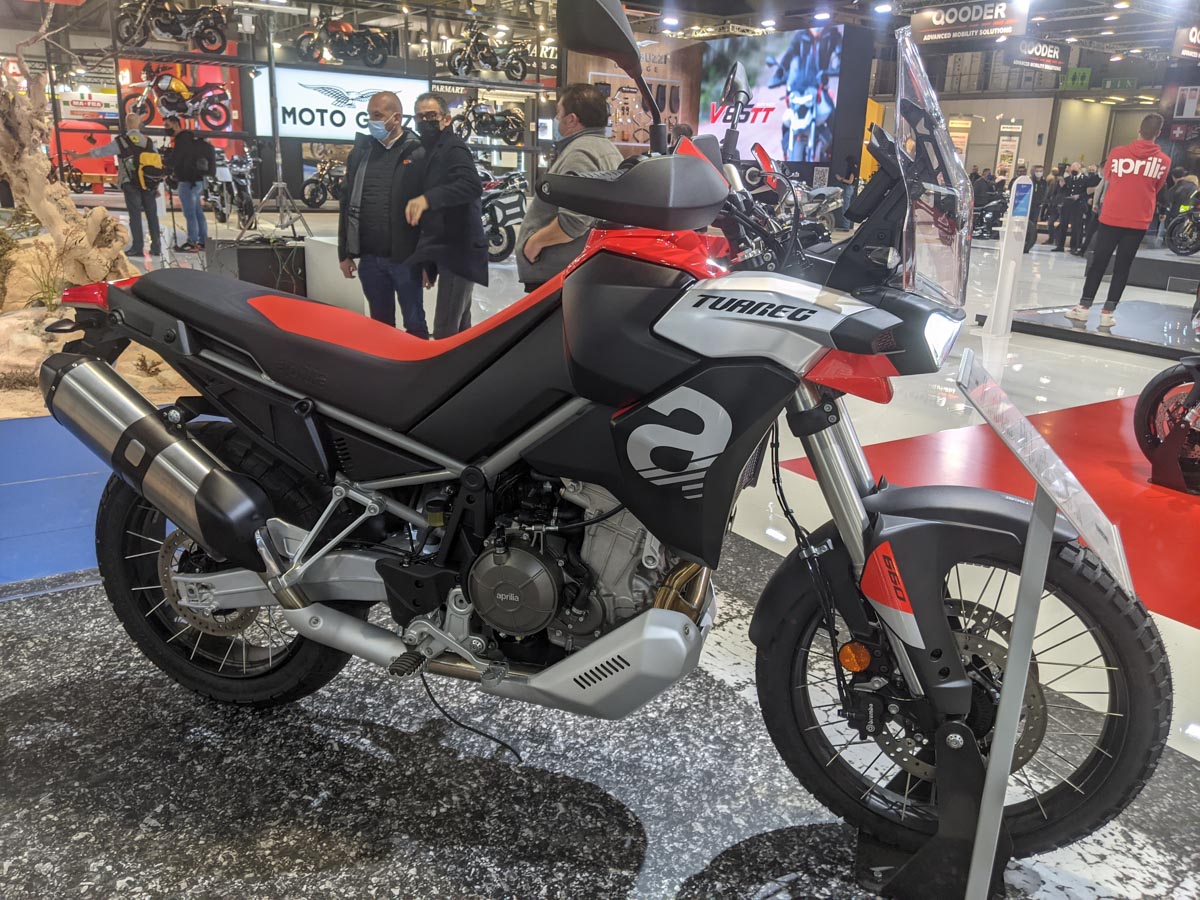 Aprilia revealed the Toureg 660 a few weeks before EICMA. It’s meant to upstage the Yamaha T7, but will sell for a little more in the U.S.: $11,999 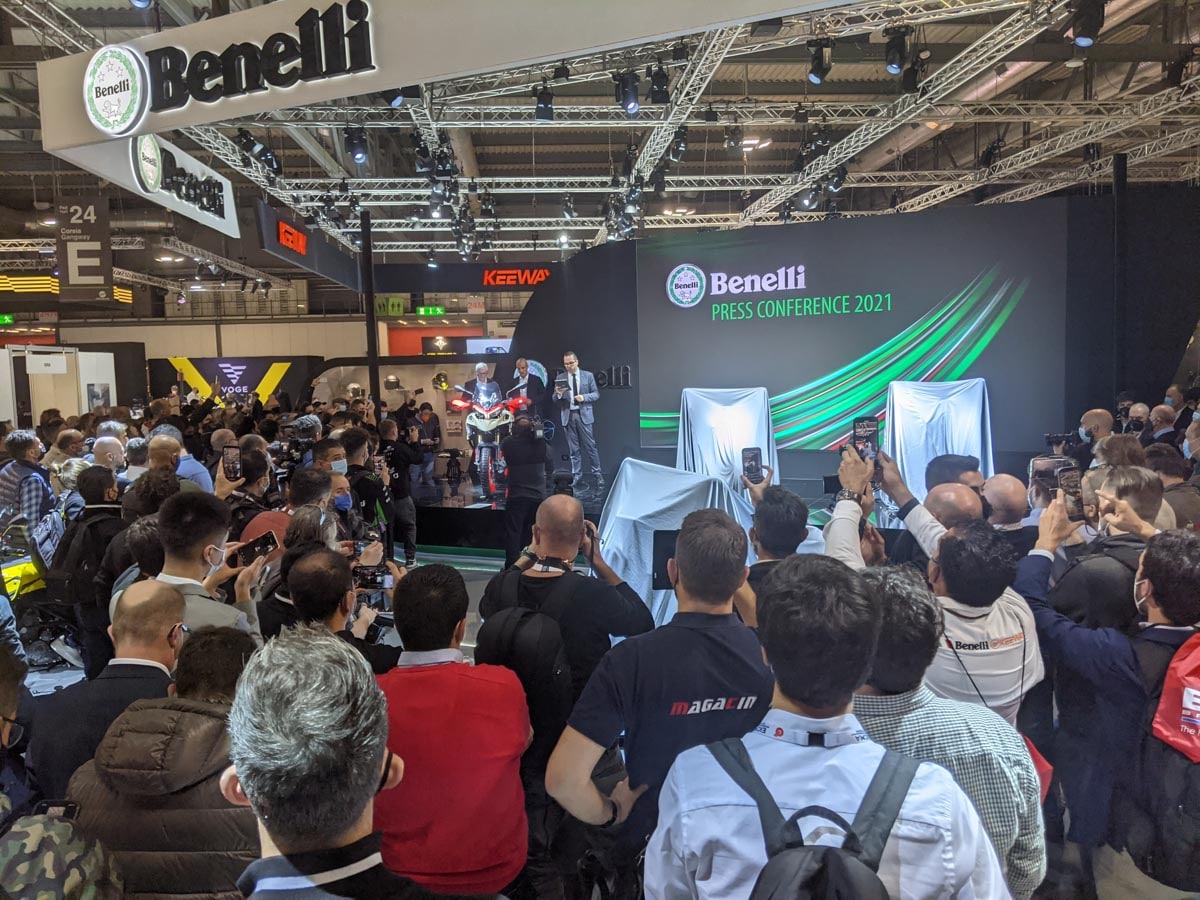 Benelli has been hugely successful in Italy, climbing to number three in the domestic market. The legacy is Italian, but the parent company is Qianjiang, which is one of the recently reduced number of companies that are now licensed by the Chinese government to export to the U.S. 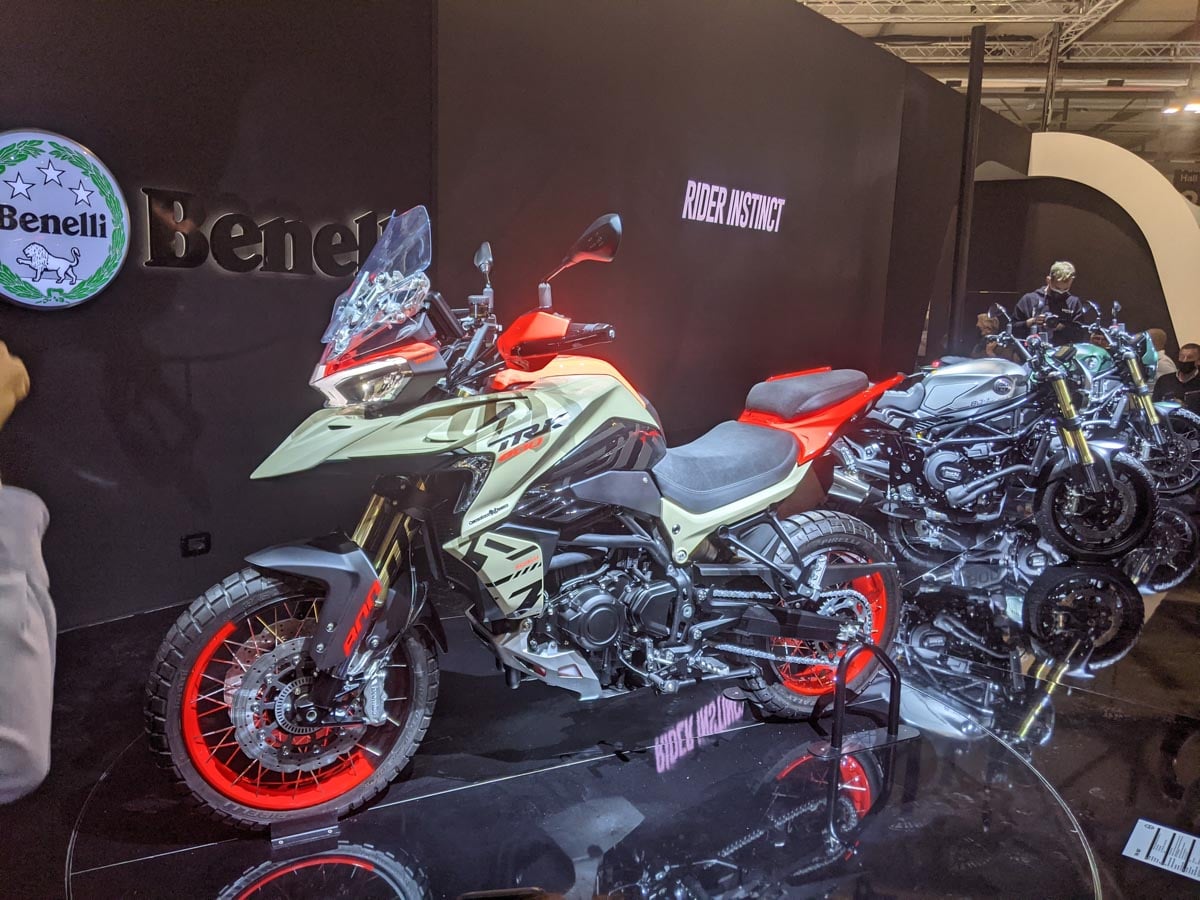 The big news from Benelli is an 800cc Adventure bike based on the TRK502. 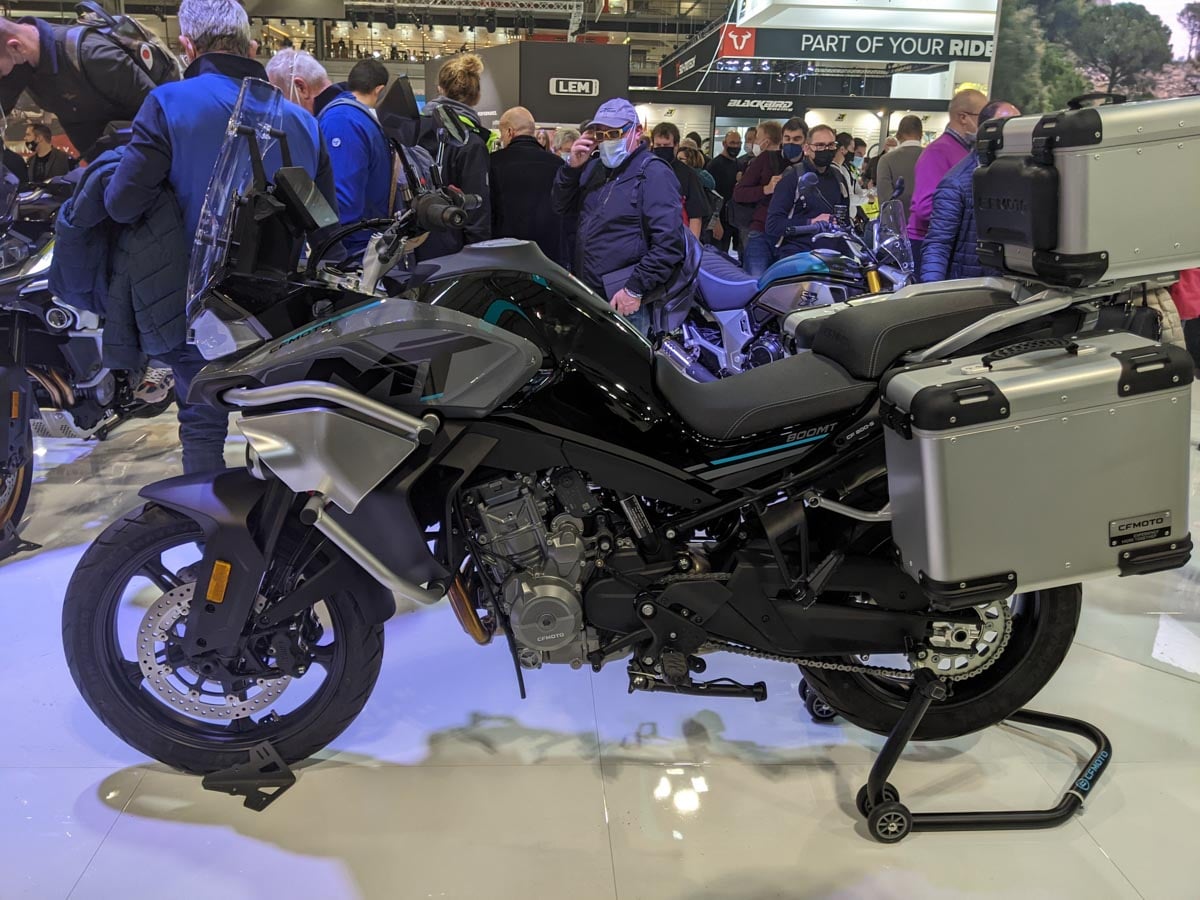 CF Moto is best known in the U.S. for its UTVs and ATVs. In Europe, it has made a significant impact on the motorcycle market. This 800cc twin has a motor that was designed by KTM and manufactured in China. 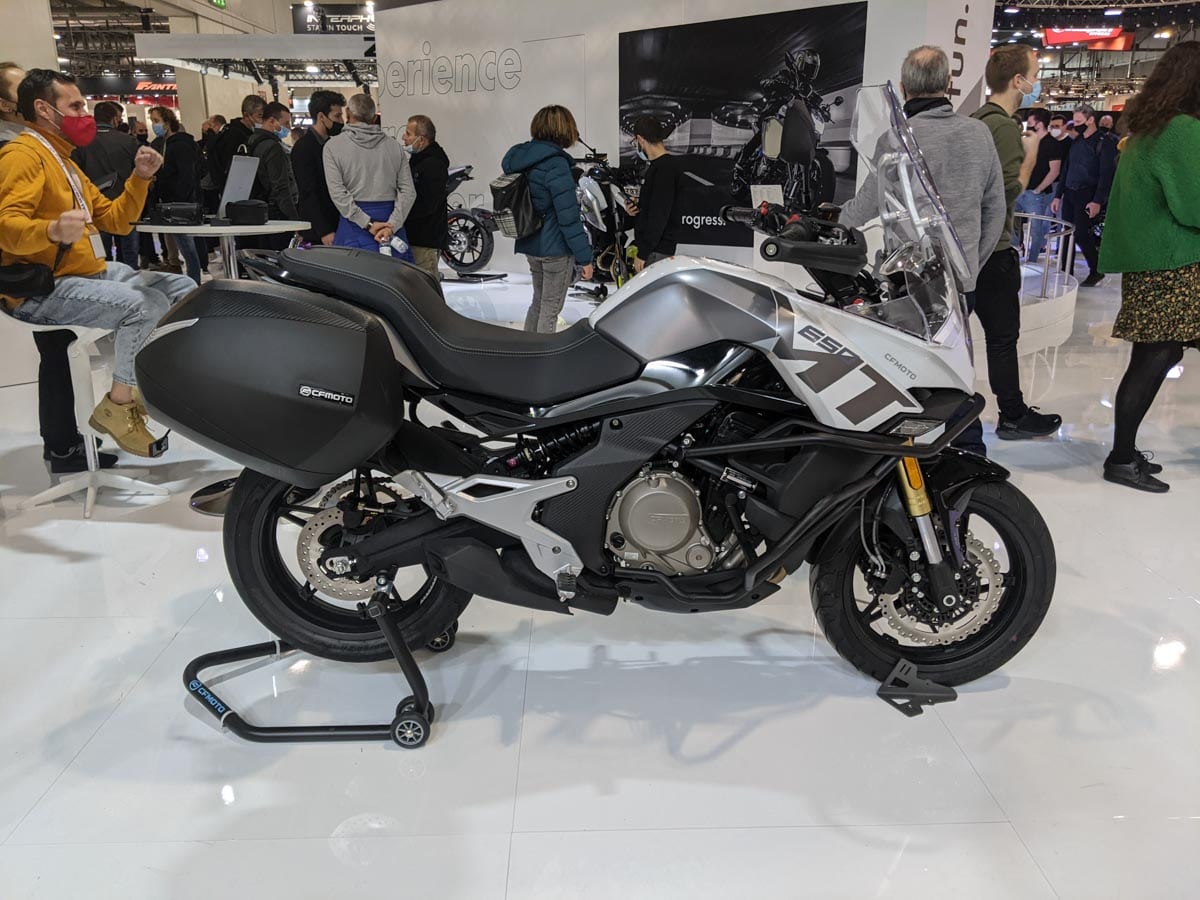 The U.S. market will soon get this 600cc adventure bike from CF Moto. 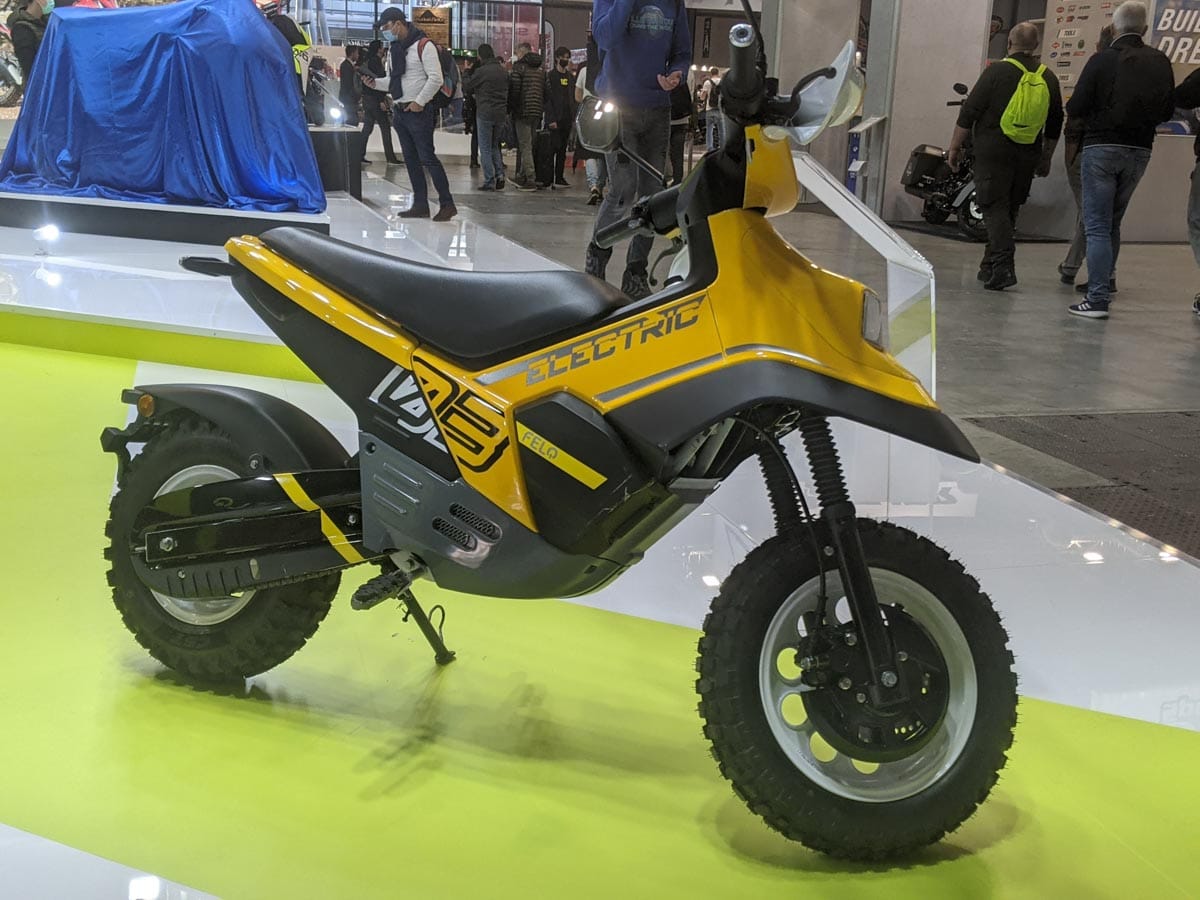 Electric scooters were everywhere at EICMA. Some were kinda fun looking. 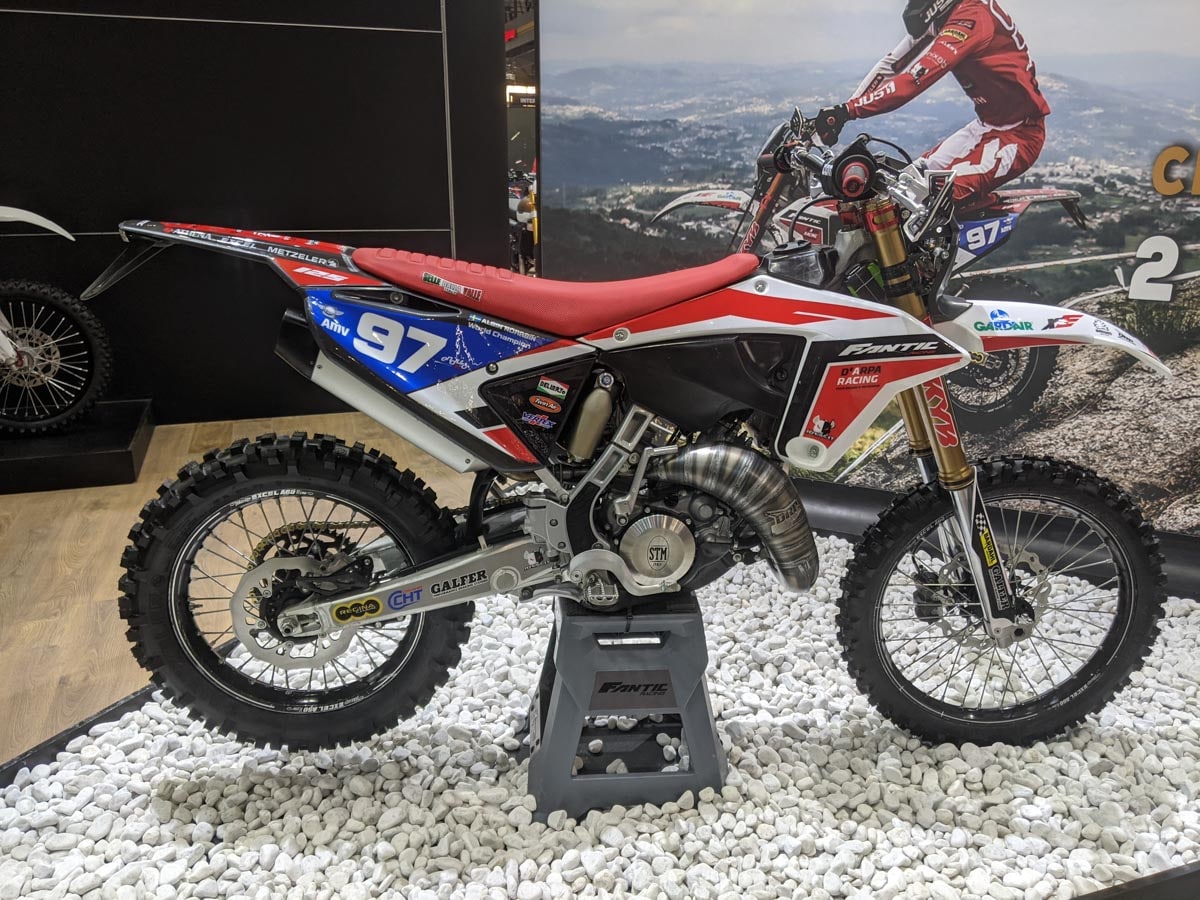 Fantic offers Yamaha-powered off-road bikes for Europe. In the U.S. an agreement with Yamaha Motors USA prevents them from being sold. 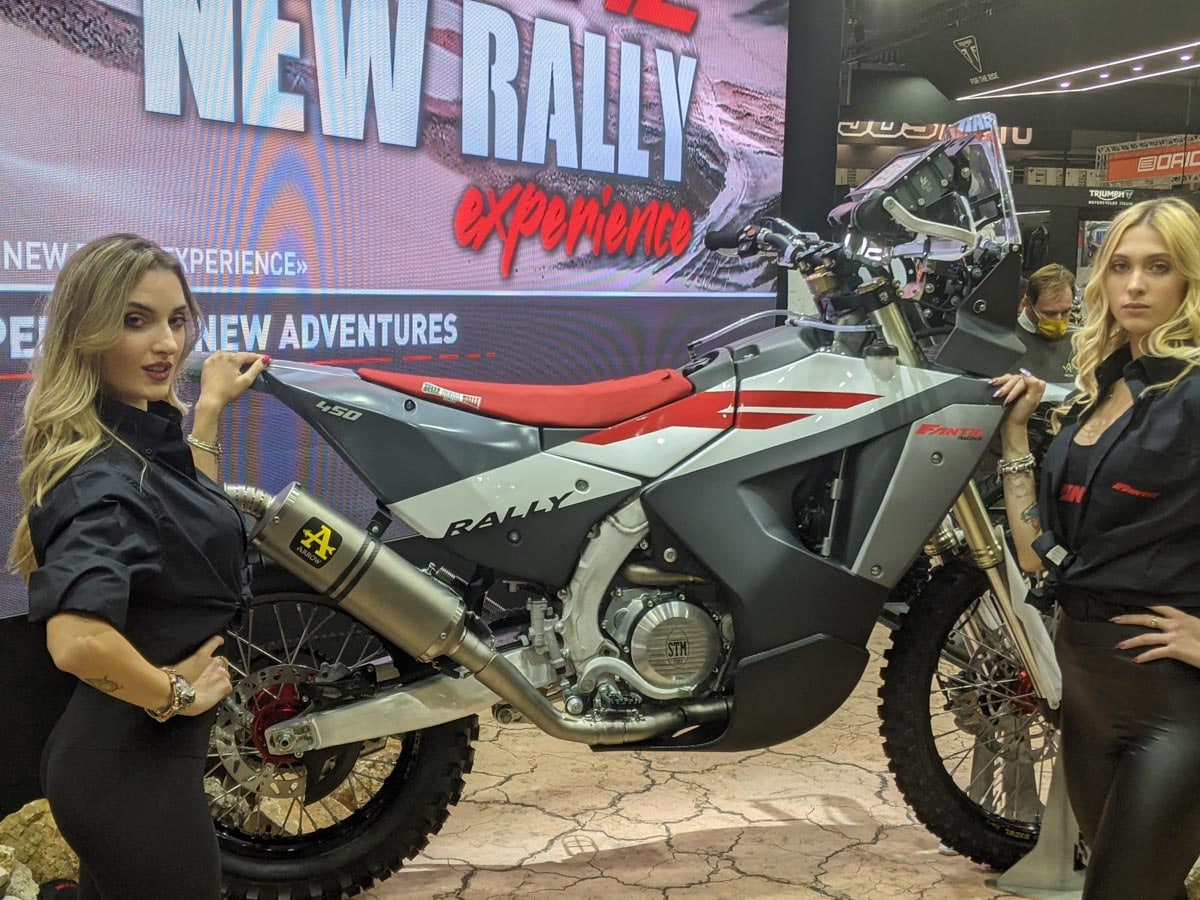 Fantic also has four-stroke models with Yamaha motors. This 450 Rally is the latest. In Milan, by the way, the fashion industry is huge, and all tradeshows from cookware to smoke alarms provide employment to an army of professional models. 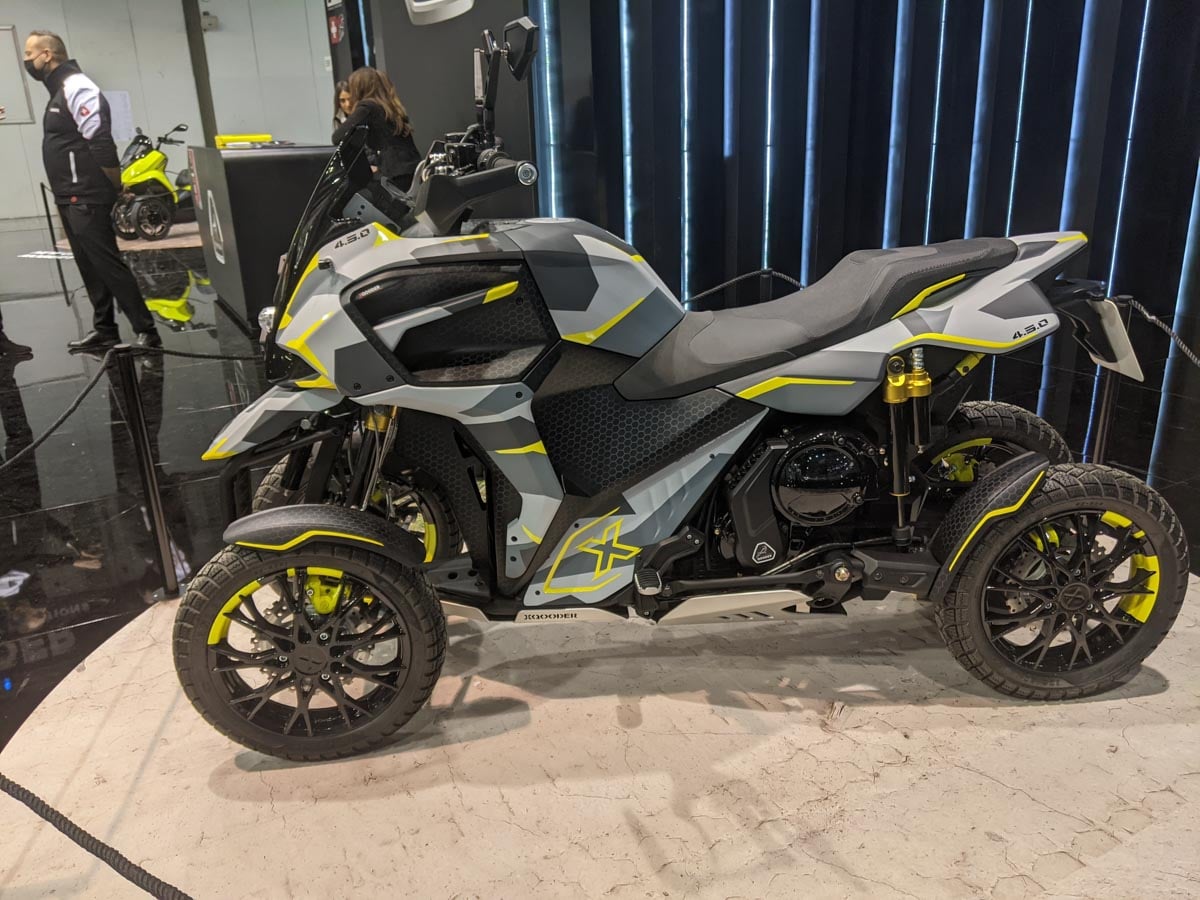 If you don’t know what to make of four-wheel adventure bikes, you’re not alone. They are increasingly popular in Europe, but in the U.S., safety regulations would probably define this as a car. It would be difficult to install airbags and seatbelts. This one is made by Qooder. 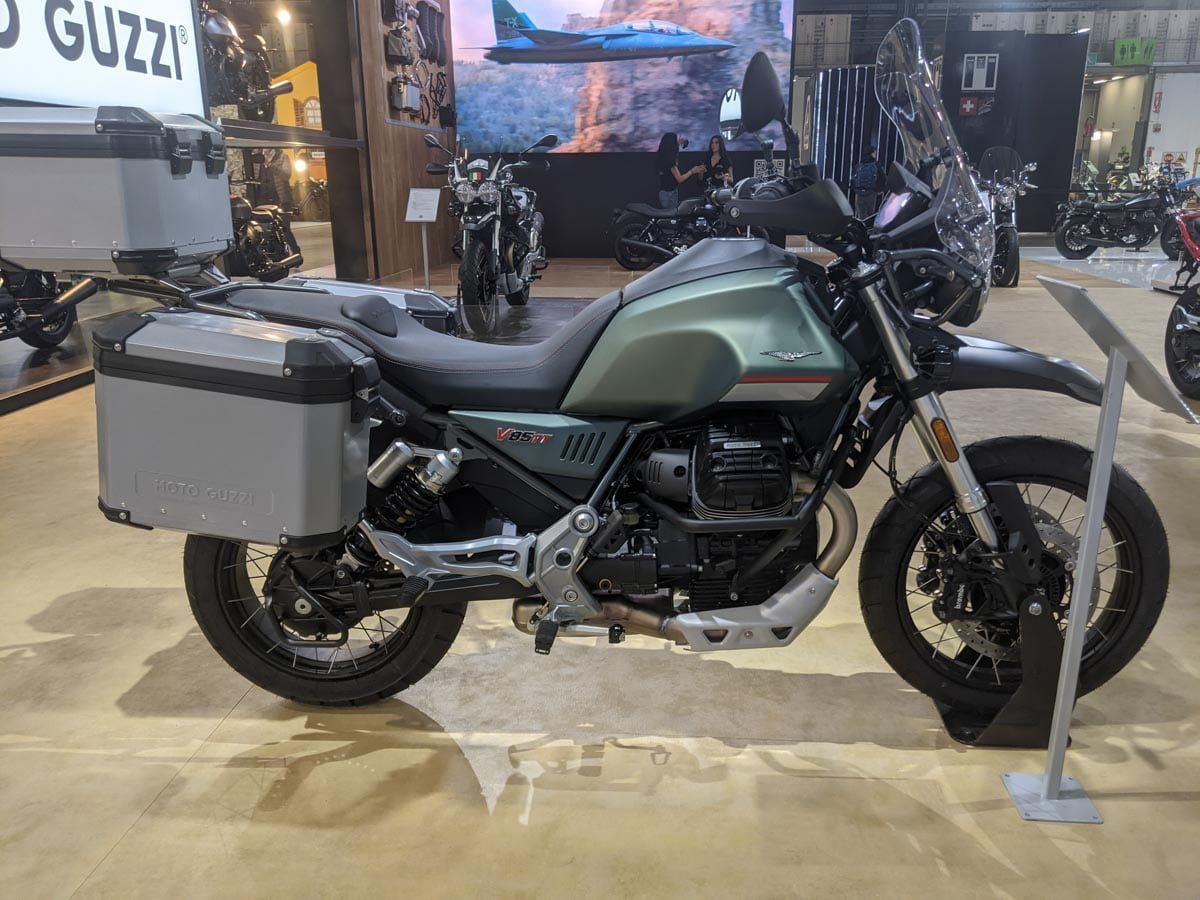 Moto Guzzi is owned by the Piaggio group, which also owns Aprilia. The Guzzi V85 was introduced just before Covid hit at the end of 2019, so we haven’t seen many in the U.S. 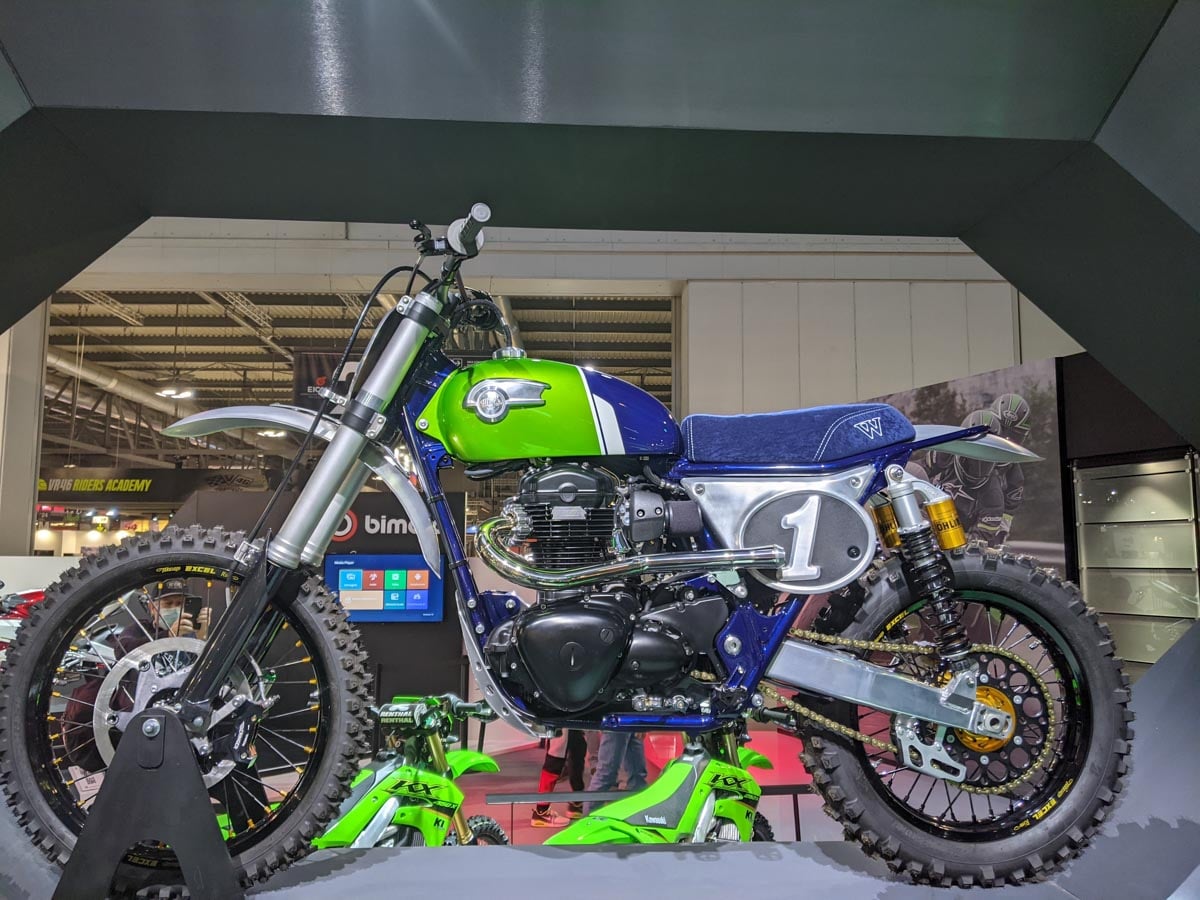 Custom bikes are in every booth at EICMA, including this one featured by Kawasaki. 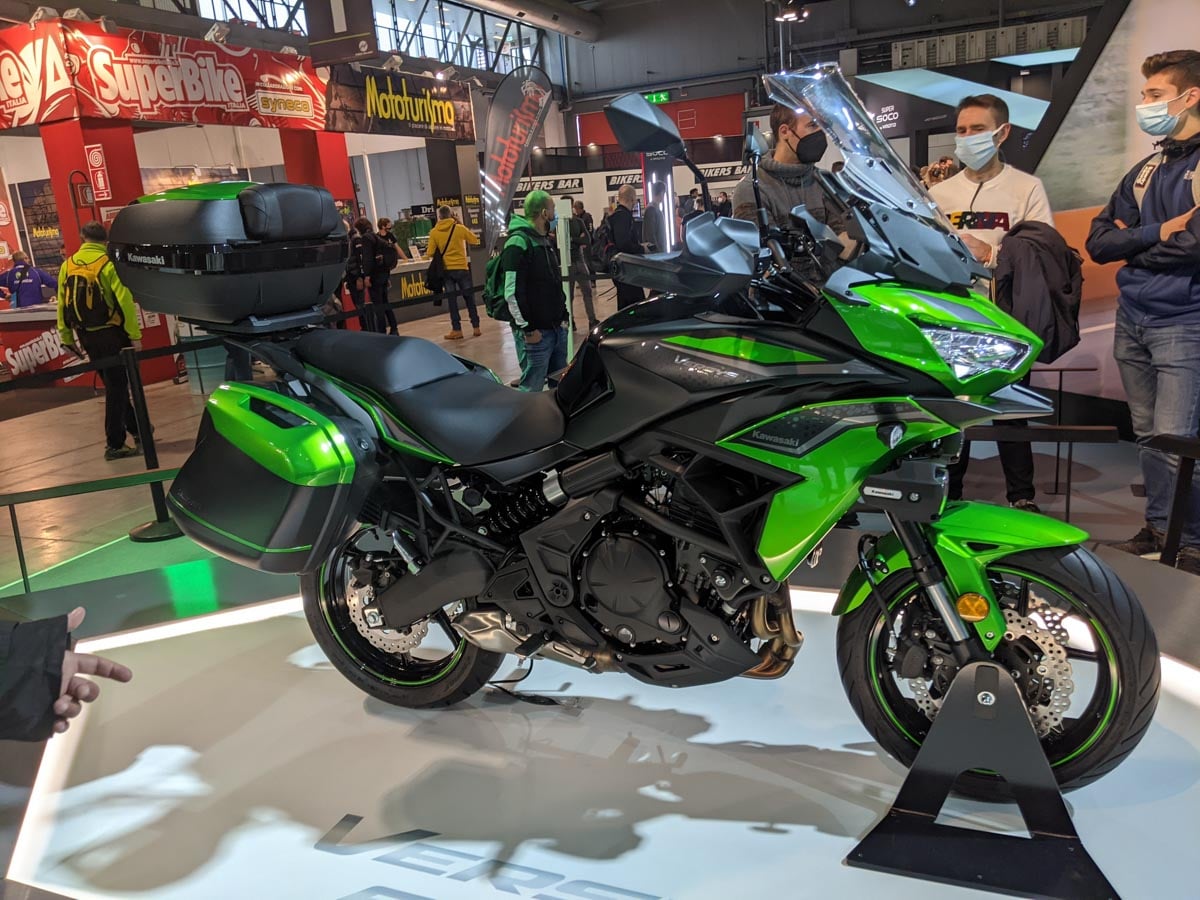 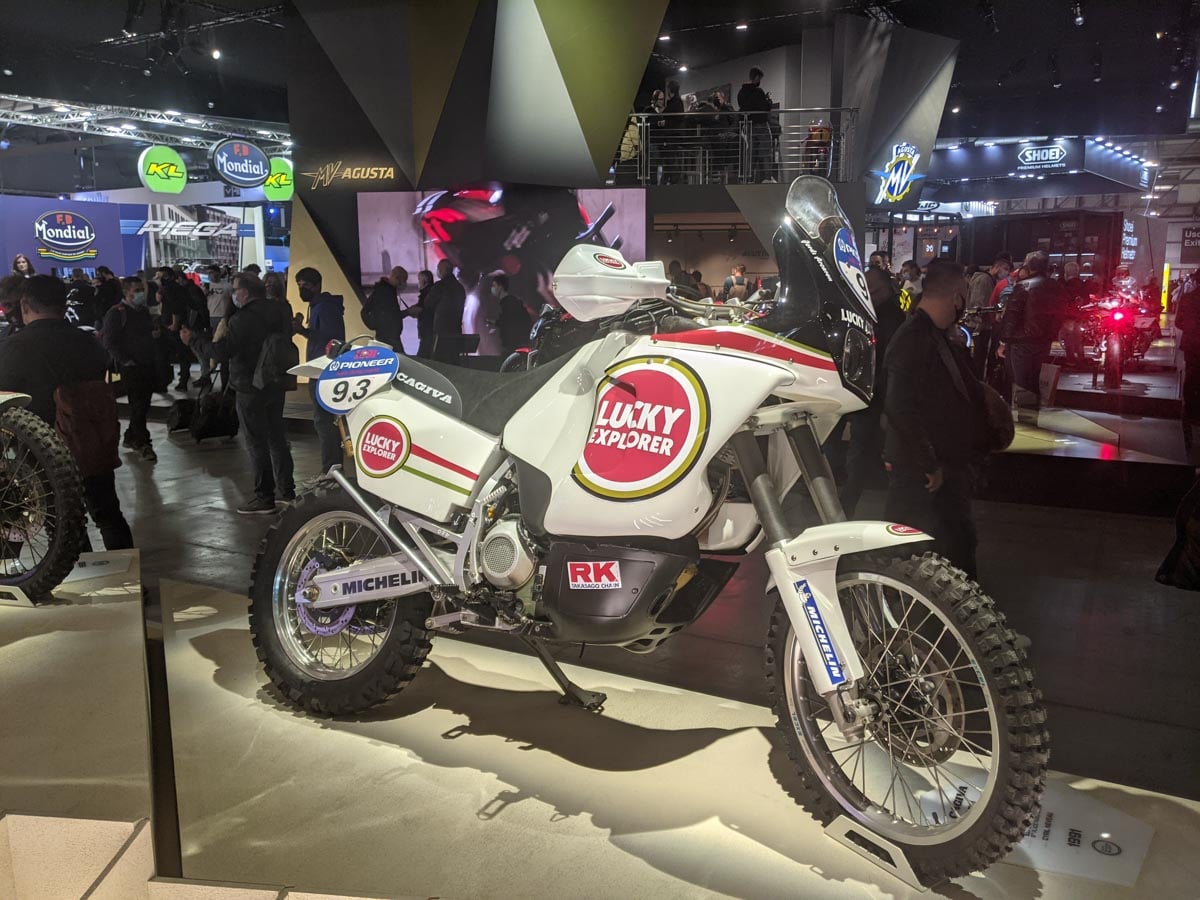 Back in 1992, Danny LaPorte used this bike to finish second in the Dakar rally. It was an all-out effort by Cagiva, built in the Ducati Race shop and mostly financed by  British-American Tobacco Inc. At the time, tobacco advertising was increasingly more regulated, hence the “Lucky Explorer” name. 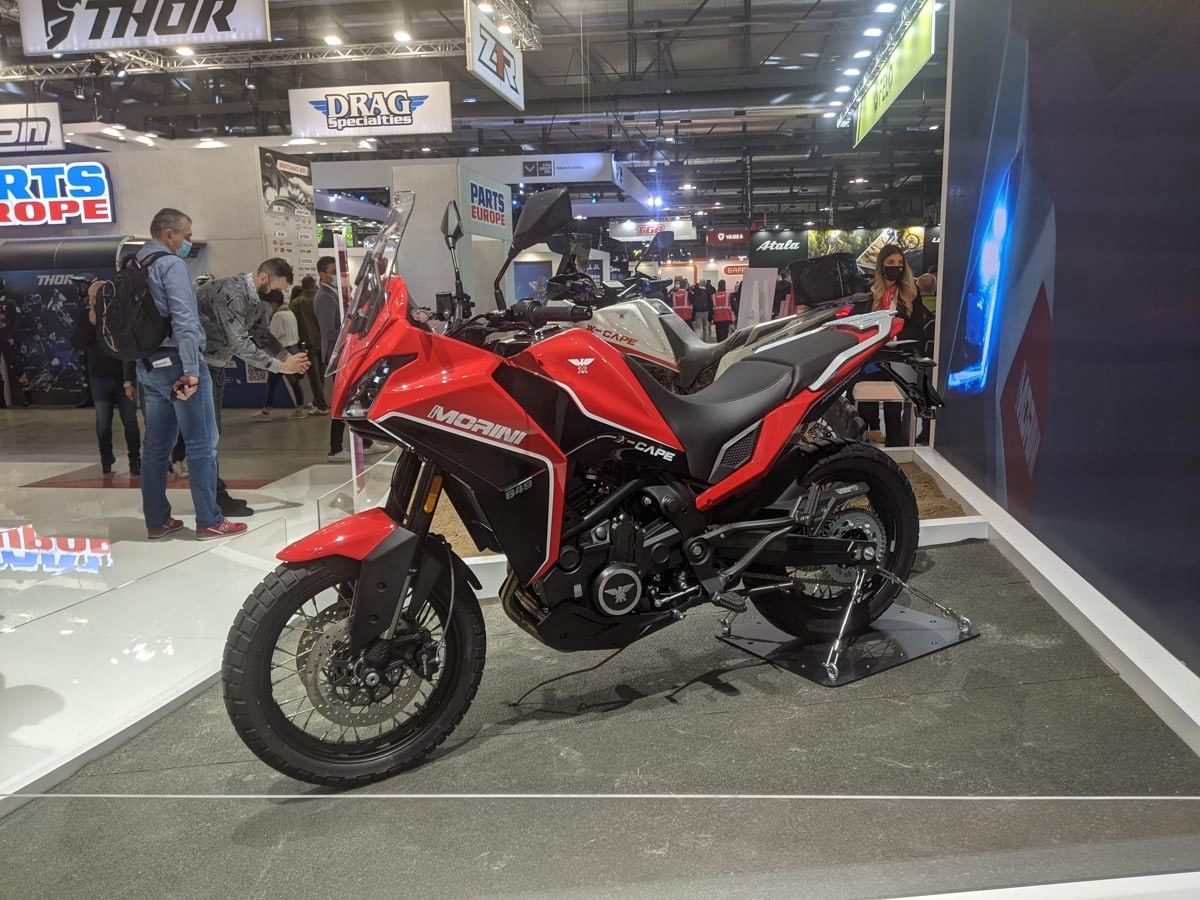 The Moto Morini X-Cape is a brand-new twin-cylinder ADV bike. Moto Morini is a historic brand which still manufactures bikes in Italy, although ownership recently passed to the Zhongneng Vehicle Group. 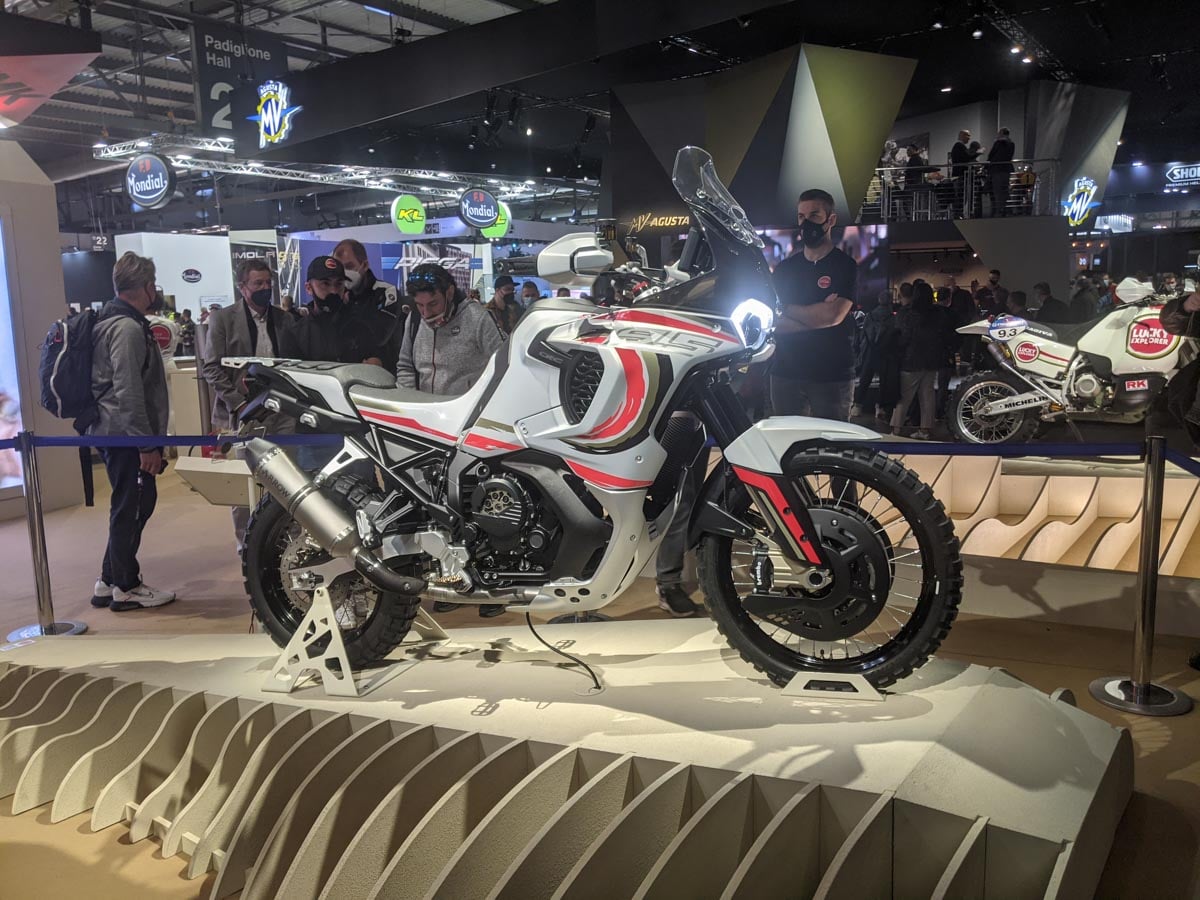 MV Agusta just revealed a new adventure bike. The 9.5 draws on the legacy of the Lucky Explorer project. MV  still uses the plant on the shores of Lake Varese that once produced Harley Davidsons in the Aermacchi days, then Husqvarnas in the ’90s. 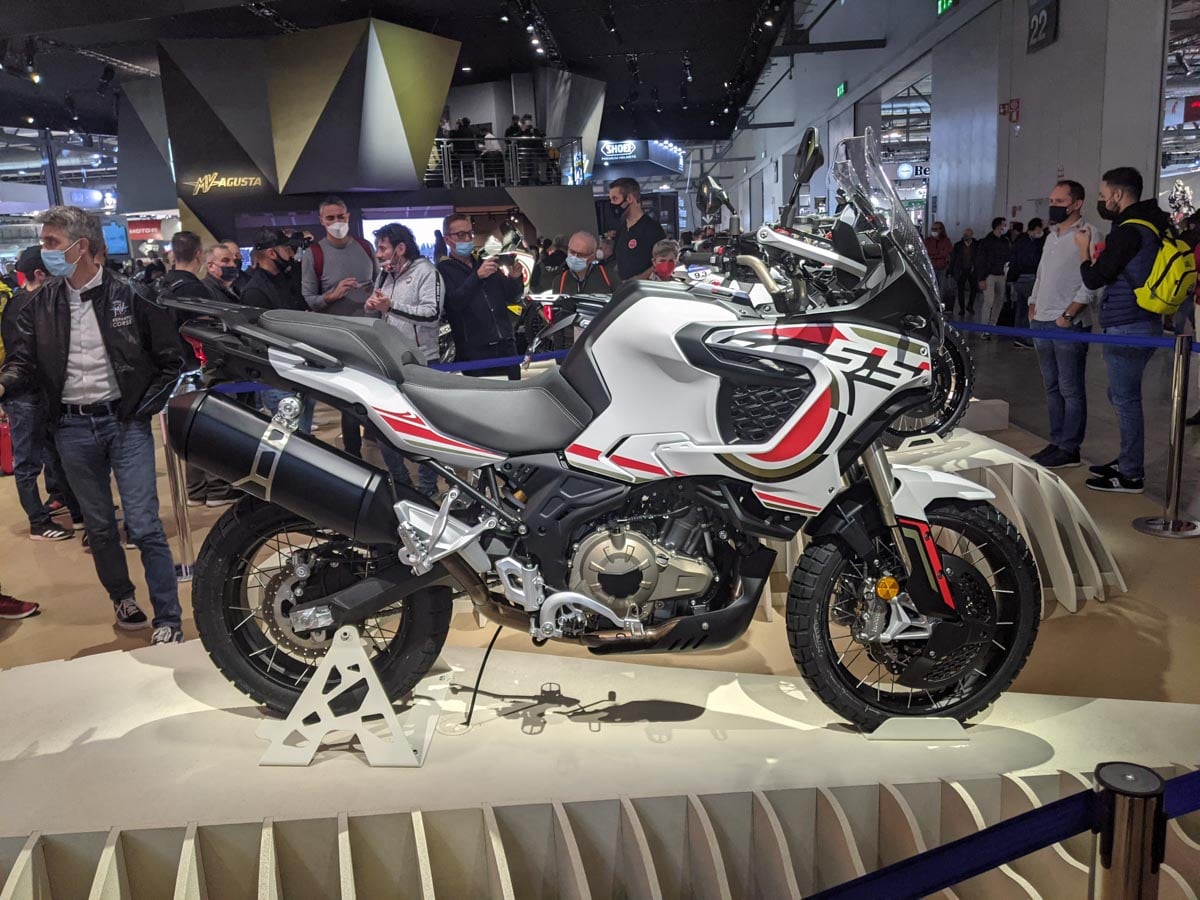