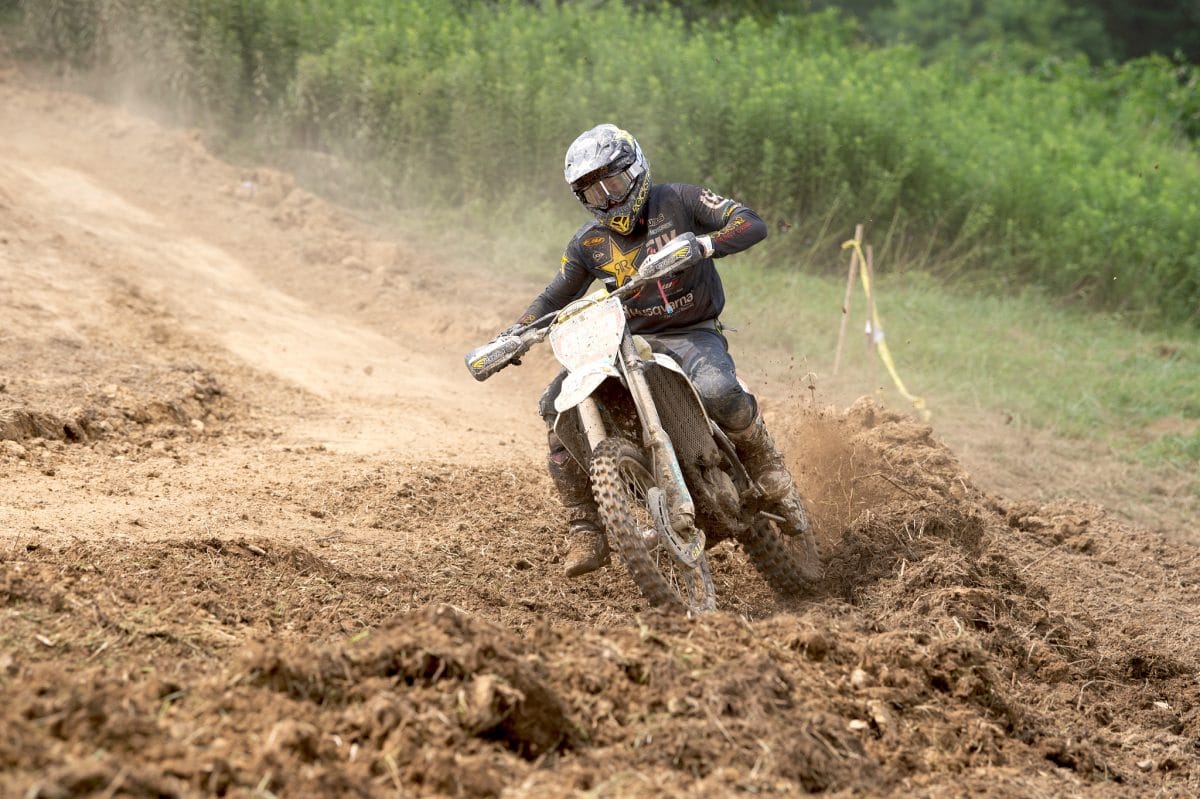 DUNKARD, Pa. (July 8, 2019) – Hot and humid conditions greeted round 9 of the 2019 AMSOIL Grand National Cross Country (GNCC) Series presented by Specialized, an AMA National Championship as the motorcycles took to the woods on Sunday, July 7 at the Inaugural VP Racing Fuels High Voltage GNCC. Rockstar Energy/Factory Husqvarna Racing’s Thad Duvall captured the overall win in Pennsylvania as he crossed the finish line two minutes ahead of his fellow competitors.

Getting off to a great start was FMF/KTM Factory Racing’s Kailub Russell, as he grabbed the $250 All Balls Racing XC1 Holeshot Award. After taking the early lead, Russell would make a mistake and fall back to second on lap two. As the race wore on Russell would put his head down and push forward, but with somewhat difficult conditions out on the course he would work to maintain his overall podium position. When the checkered flag flew, Russell would come through second overall and continue to earn valuable championship points.

Babbitt’s Online/Monster Energy/Kawasaki’s Josh Strang started back in the sixth place position on the opening lap, but was working on putting together what would end up being his best finish thus far in the 2019 season. Strang would continue to move up through the pack as the three-hour race continued on. As the white flag came out Strang would find himself fourth overall, but with a last lap pass made Strang would emerge third overall as the checkered flag waved.

Strang’s teammate, Babbitt’s Online/Monster Energy/Kawasaki’s Jordan Ashburn also put together one of his best races of the season. Ashburn would start the day out third overall, setting a good pace while running at the front of the pack. As Strang made his way up, Ashburn would find himself battling back-and-forth for the duration of the race with his teammate. After falling back to fourth once again on the last lap, Ashburn would come through just 2.6 seconds behind Strang for fourth overall.

Tely Energy Racing/KTM’s Grant Baylor earned his second-straight top five finish yesterday in Pennsylvania. G. Baylor had a consistent day in the humid conditions, swapping positions just a couple times throughout the race. As the series is now in its Summer Break, G. Baylor will look towards September and work at improving his championship standings in the last four rounds of the series.

The XC2 250 Pro defending champion, Trail Jesters KTM’s Ben Kelley was once again running at the front of the pack at High Voltage. As the XC2 riders came through on the opening lap, Kelley would hold the overall lead with his adjusted time from starting on the second row. Kelley held the overall lead for several laps, but would eventually move back to sixth overall as the race wore on. Kelley would hold onto the XC2 class lead throughout the entire three-hours, and come through to earn his ninth-straight win of the season.

Coming through seventh overall was Tely Energy Racing/KTM’s Steward Baylor Jr., earning sixth in the XC1 class. Baylor Jr. had suffered a crash early on in the race, putting him behind some of the XC2 competitors and making it that much harder to move up through the pack. Baylor Jr. would manage to move from 10th on the opening lap up the seven and then sixth in his class by the time the white flag flew. He would hold onto that position until the checkered flag came out.

Making his return to racing this weekend was FXR/Husqvarna/SRT/Hoosier’s Layne Michael. Michael has been plagued with injuries this season, but is now looking forward to finishing out the season strong. Michael was running in eighth overall for majority of the day, with a push up to fifth in XC1 at one point in the race. As the riders came through for their last lap, Michael would sit seventh in his class and finish out with an eighth overall. AmPro Yamaha/Moose Racing/Parts Unlimited-backed rider Ricky Russell had a top five start to the day in Pennsylvania. However, as the race continued on Russell would move back to seventh and then as the checkered flag came out eighth in the XC1 class, ninth overall.

Coming through 10th overall was XC2 competitor, Coastal Racing/Husqvarna’s Craig Delong. On the opening lap, Delong would find himself second overall on adjusted time, but the hot and humid conditions made it brutal out there and he would fell off the leaders pace after a couple laps. Delong would hold onto second in the XC2 class, and earn his fifth top 10 overall finish of the season.

Phoenix Honda Racing’s Andrew Delong came through 11th overall and ninth in the XC1 class, right behind his brother Craig. A. Delong has been having a great season, and currently sits 7th in the championship standings. A. Delong was featured on the High Voltage GNCC shirt as he calls Pennsylvania home.

Husqvarna/FXR/Thornhill Automotive’s Cory Buttrick unfortunately had he day end early after running eighth earlier in the race. Buttrick would continue on for four laps, but on his fifth lap would be forced to head into his pits. Buttrick sits 10th in XC1, but will aim to improve that standing after the series break.

Tely Energy Racing/KTM’s Liam Draper came through third in the XC2 class for the second-straight race. Draper earned his first podium at the previous round in Snowshoe, and once again worked his way up from a fifth place start to third. Beta USA Factory Racing’s Mike Witkowski battled throughout the day, pushing to put his Beta motorcycle back on the podium. Witkowski would fall one spot short of the podium, but still remains second in the points standings.

In the FMF XC3 125 Pro-Am class it was Trail Jesters KTM’s Jesse Ansley coming through to take the class win. Heading into the summer break, Ansley sits just one point behind current points lead Beta USA Factory Racing’s Cody Barnes. Barnes had a mechanical issue, which resulted in a long pit stop to fix it. Barnes would head back out and finish fourth in the class. Lojak Cycle Sales’ Chase Colville came through to earn his best finish of the season with a second in the class. Colville now sits third in the points standings. New to the podium was FXR/Appalachian Offroad/JDP Suspension’s Jason Lipscomb. Lipscomb has finished inside the top five at the previous three races, but has now added a podium finish to his results.

The top amateur honors went to 250 A competitor, Trail Jesters KTM/FMF/Edelmann Sales’ Simon Johnson. Followed by fellow 250 A rider, XC Gear/HBD Moto Grafix/KTM’s Chase Hayes in second and 200 A Dominick Morse coming through to take the third and final spot on the top amateur podium.

The VP Racing Fuels High Voltage AMSOIL Moto Hero was awarded to Brian Swead during the afternoon races opening ceremonies. Swead served 10 years active duty, and was sent to Panama and many other undisclosed locations during his service. Swead is part of the motorcycle industry, and has providing many services for different teams. He now is part of the FMF/KTM Factory Racing team, driving the off-road racing semi to each of teams events. Swead will receive a $250 AMSOIL gift certificate and a FREE set of Greenball’s premium light truck Kanati brand tires valued over $1,000 from our friends at AMSOIL and GBC Tires.

As the 10 a.m. race got underway it was Fly/Maxxis/Pro Circuit/KTM’s Becca Sheets getting a good jump off the line and heading into the woods first. Sheets would onto the lead, but would soon have company from KTM/MEPMX/Fly Racing’s Mackenzie Tricker as she made her way through the pack. Tricker would catch and make a pass on Sheets as the white flag came out indicating one more lap.

However, on the prior lap Tricker would also hit her foot off of something in the woods, causing immense pain the last two laps. Sheets would make a last lap pass back around Tricker and come in for the win 29 seconds ahead of Tricker. Sheets and Tricker would also take the top two overall spots in the morning results. AmPro Yamaha’s Rachael Archer would have a consistent day running third in WXC for majority of the day. She came through to round out Women’s Pro podium. Blayke Coler would come through on adjusted time to take third overall from the 125 B/C class.

As the checkered flag flew on the 8 a.m. race it was Tely Energy Racing/KTM’s Joseph Cunningham taking his ninth straight youth overall win of the season. Cunningham had a pretty uneventful race, as he held the lead from start to finish. Trail Jesters KTM’s Brayden Nolette would come through in second after battling throughout the race with Appalachian Offroad/Endorphin Grafix’s Parker Todd who rounded out the youth overall podium in third. In the YXC2 Super Mini Jr class it was Cooper Jones taking the win followed by Jack Joy and Casey Burton coming through second and third to round out the class podium.