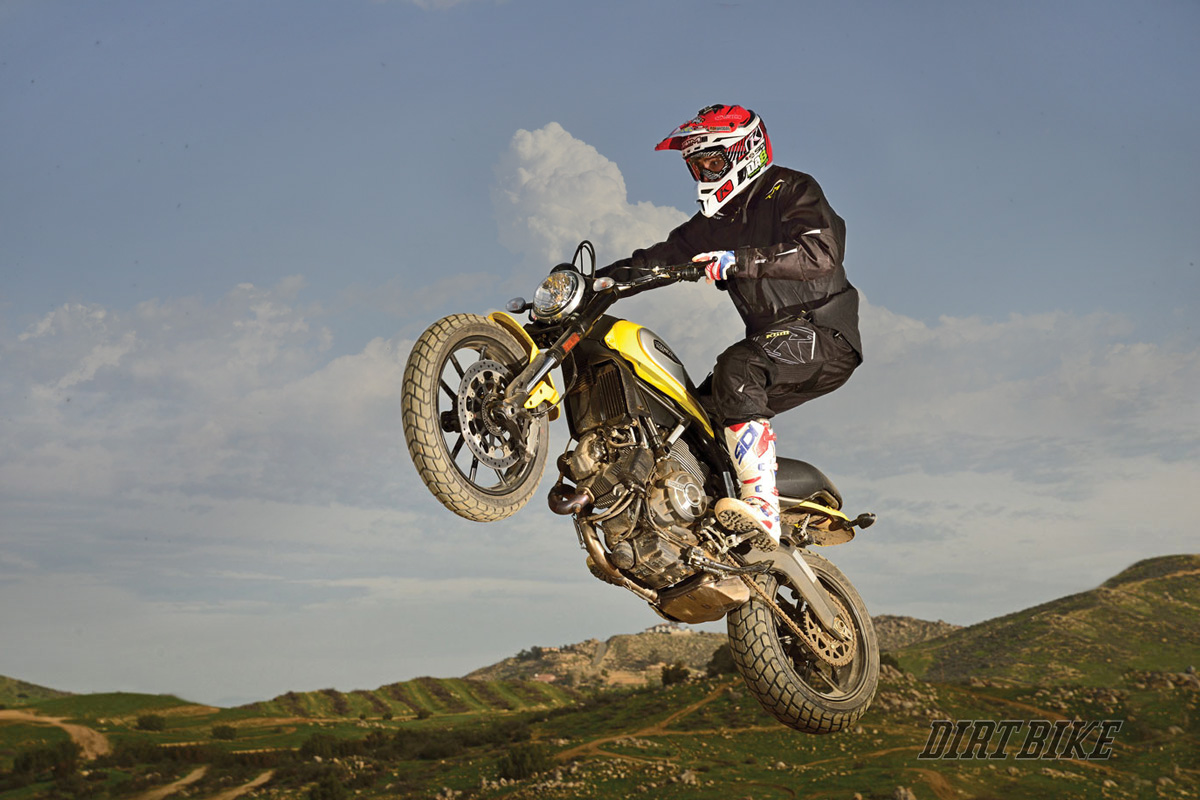 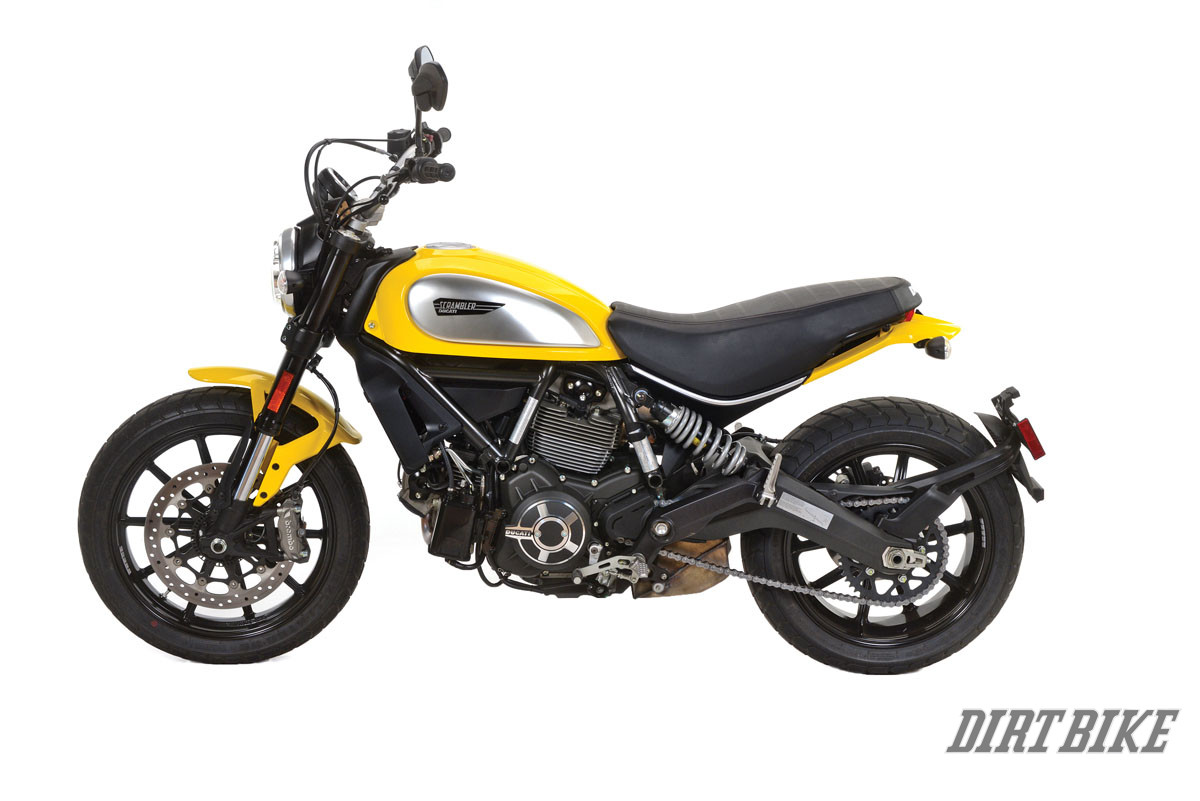 We’re like stalkers. We’ve been standing outside the Ducati factory’s back door waiting for a long time. We’ve been staring through binoculars from a dingy room that has pictures thumbtacked all over the walls. One wall is a shrine to Ducati dual-sport bikes from long ago. Another is devoted to the days when Ducati-powered motorcycles won the Paris-Dakar. Deep inside, we know that Ducati still has feelings for us dirt bike guys, even though the company hasn’t looked our way in years.

Finally, our wait has ended. The Ducati Scrambler just arrived at American dealerships. Other people don’t understand it. They call it a naked bike, a retro bike, a commuter or an entry-level bike. But, we know what it is. It’s a dirt bike, and proof that Ducati still loves us.

OKAY, WHAT IT REALLY IS
The Scrambler Ducati is designed to be something different in the eyes of every beholder. It’s a stripped-down, air-cooled V-twin (or “L-twin,” as Ducati calls it), with styling from the ’60s and a price tag that puts it in the same range as a 250F motocrosser. The motor is based on the one in the 796 Monster and produces about 75 horsepower. In this configuration it displaces 803cc and has been tuned for low-end torque. Ducati is trying to connect it to the original Scrambler from 1962, which had the same look. It will be available in four styles, mostly differentiated by cosmetics. This is the Icon base model, which will carry a price of $8495. The other models are $1500 more: the Full Throttle, the Classic and the Urban Enduro. The latter two have spoked wheels, but the Icon has cast wheels. All have proprietary Pirelli MT 60 tires—a super-wide 180/55 R 17 in the rear and a kind of weird 110/80 R 18 in front. The bike comes with anti-lock brakes as standard equipment. The front brake is a single disc. The suspension uses very basic KYB components with a tad under 6 inches at either end. 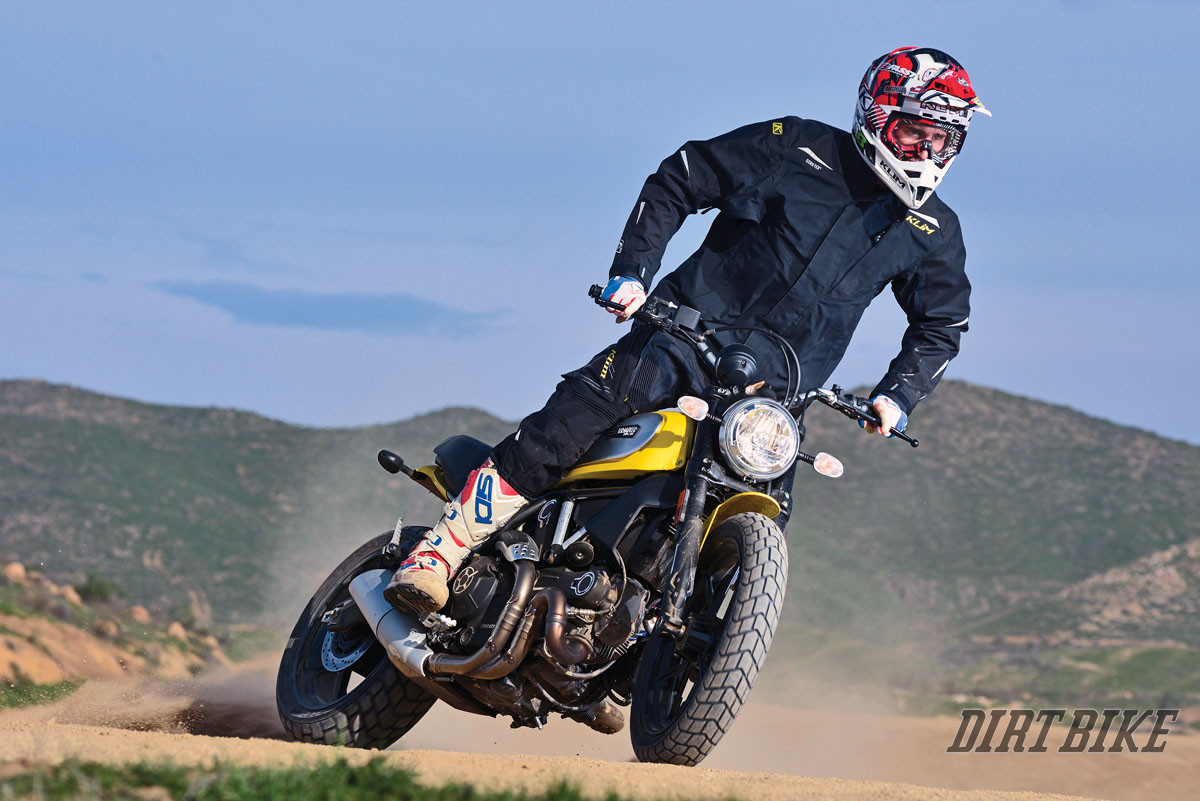 The dry weight of the Icon is said to be 375 pounds, which makes it either the world’s lightest twin-cylinder adventure bike or the world’s heaviest dual-sport. We have our own biases, so we see a long-range, dirt-and-street adventure platform. The Scrambler has decent fuel range with a 3.57-gallon tank, but it’s stripped to the bone. You have to come up with your own ways to carry stuff. Ducati is working on a line of accessories, but we settled on a full set of Cortech Super 2.0 bags, because they’re inexpensive and will attach themselves to virtually any motorcycle.

WHAT WE LEARNED
First off, the Scrambler is rather small. If you’re an adventure bike guy who’s used to climbing aboard an R1200GS or an 1190 with a stepladder, the Ducati will feel like a mini bike. The seat height is low enough for almost any vertically challenged rider to touch the ground flat-footed. It makes you feel confident and brave in the dirt. The bike seems so small that you forget that it still weighs as much as a typical 450 with a 125 strapped to the back. On top of that, it’s very powerful. The Ducati has more torque than any of the 800cc adventure bikes out there. It will easily outrun a BMW 800GS. A Triumph Tiger might have more on top, but the Ducati is stronger down low. Put all that together and the machine is an absolute gas to ride. Having so much power in such a small, unimposing package is the very definition of fun. It looks a little dirt-track-oriented, like an Italian Harley XR750. That’s appropriate, because the Scrambler loves a good, high-speed power drift. It makes you smile every time you open the throttle. 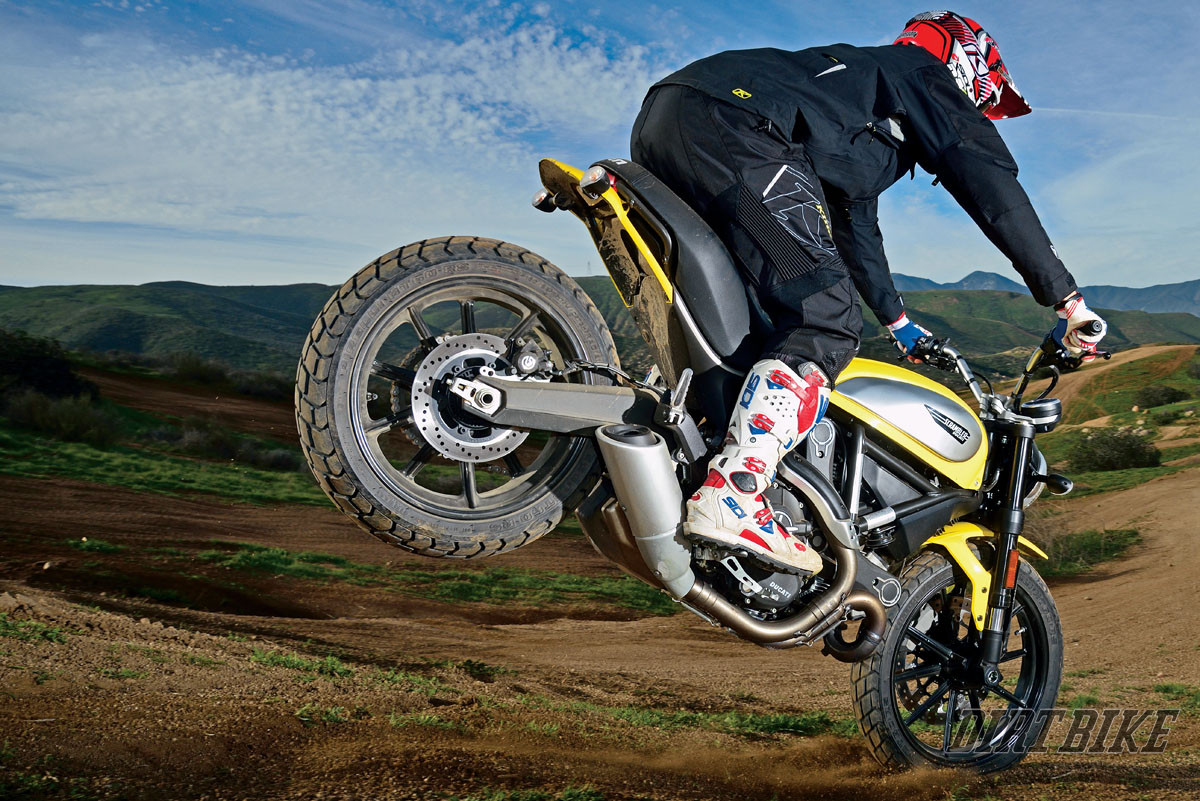 Before indulging in our dirt fetish, we thought that tires would be the Scrambler’s limiting factor, and there are virtually no DOT knobbies available for the front. There might be an 18-inch rear knobby that would fit, but we weren’t sure that would be a good idea. It turned out that we were delighted with the Pirelli MT 60 tires that come stock. They work surprisingly well on hardpack and are tolerable in soft soil. We ran tire pressure down around 20 pounds, but we wouldn’t want to go any lower with tubeless tires on cast wheels. It turns out that the first thing that cramps the Scrambler’s style in the dirt is the suspension. There isn’t much of it. Ducati obviously wanted to keep the seat height low, so travel was sacrificed. What’s there is very soft, particularly in front. The fork bottoms with a hard clank when things get interesting.

That didn’t stop us from trying smaller trails and more difficult off-road challenges. The anti-lock brakes are the next limitation. We disabled the rear anti-lock system, although we don’t advise that for anyone without expert riding credentials. If you can lock the rear brake, you can use it to steer the bike. Again, it’s more fun than you are probably allowed in the state of California. If we were to keep going with our dirt modifications, we would get some kind of protection for the engine cases and maybe crash bars. The handlebar on the Icon is way too wimpy, and the footpegs are like pencils. All that stuff should be on the market soon.

COMFORT SHOES
When you’re on the Scrambler for a long ride, it has strengths and weaknesses. The seat is surprisingly good, and the throb of the motor is kind of like a massage for your central nervous system. But, it’s cramped in the legs, just like a full-blooded street bike. You’re forced to pay for that low seat height again and again. And because the Icon is stripped down, you don’t have much wind protection. We knew that going in and never expected it to be a long-distance freeway liner. You simply have to tolerate the dead-straight highways and wait for some twisty side roads. Then, you’ll carve past all your buddies on their gigantic adventure bikes and forget all about how bored you were earlier.

The fact that the Ducati is so bare is one of its greatest assets. It sparks your imagination. You can’t look at it without making mental modifications. In our minds we’ve already built it into the ultimate 800cc dirt touring bike. All that we’re waiting for is someone to make the right parts.
Whether or not it’s the Ducati dirt bike that we’ve been waiting for as it sits is debatable. But, there’s a real dirt bike in there, and we can’t wait to let it out.

THE BEST OF DAKAR