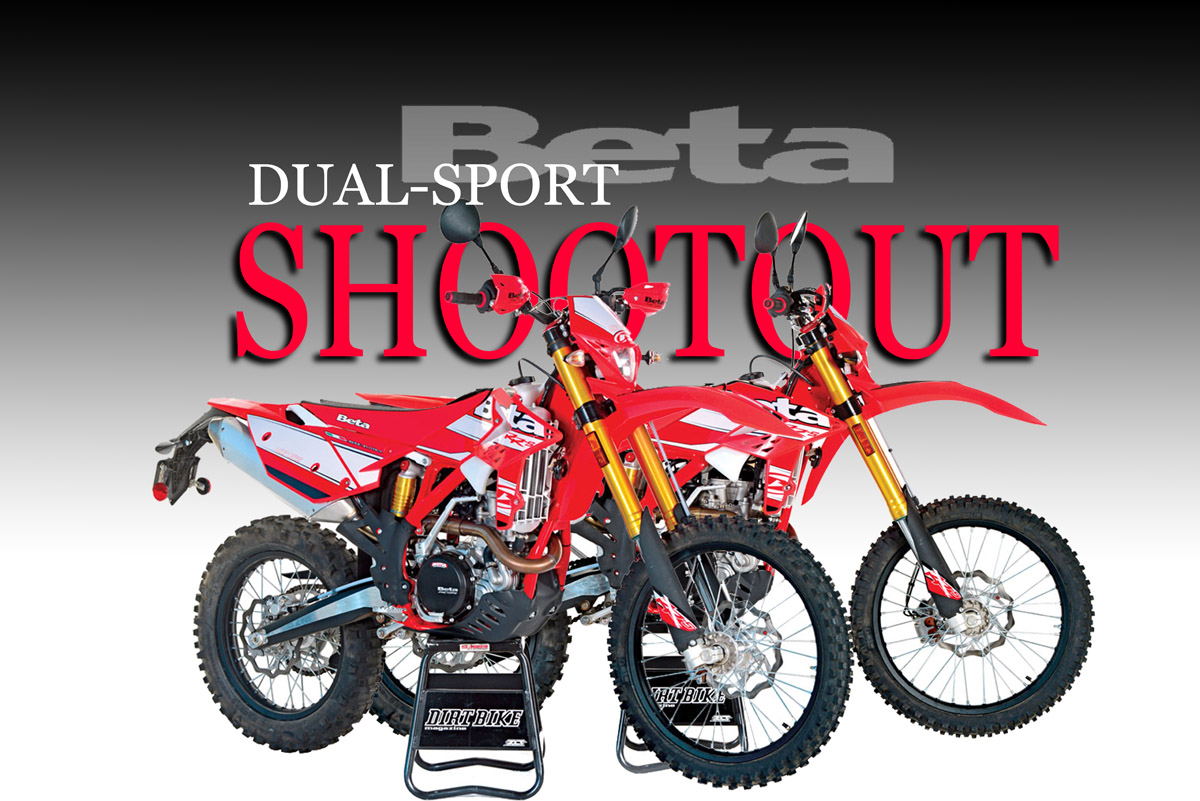 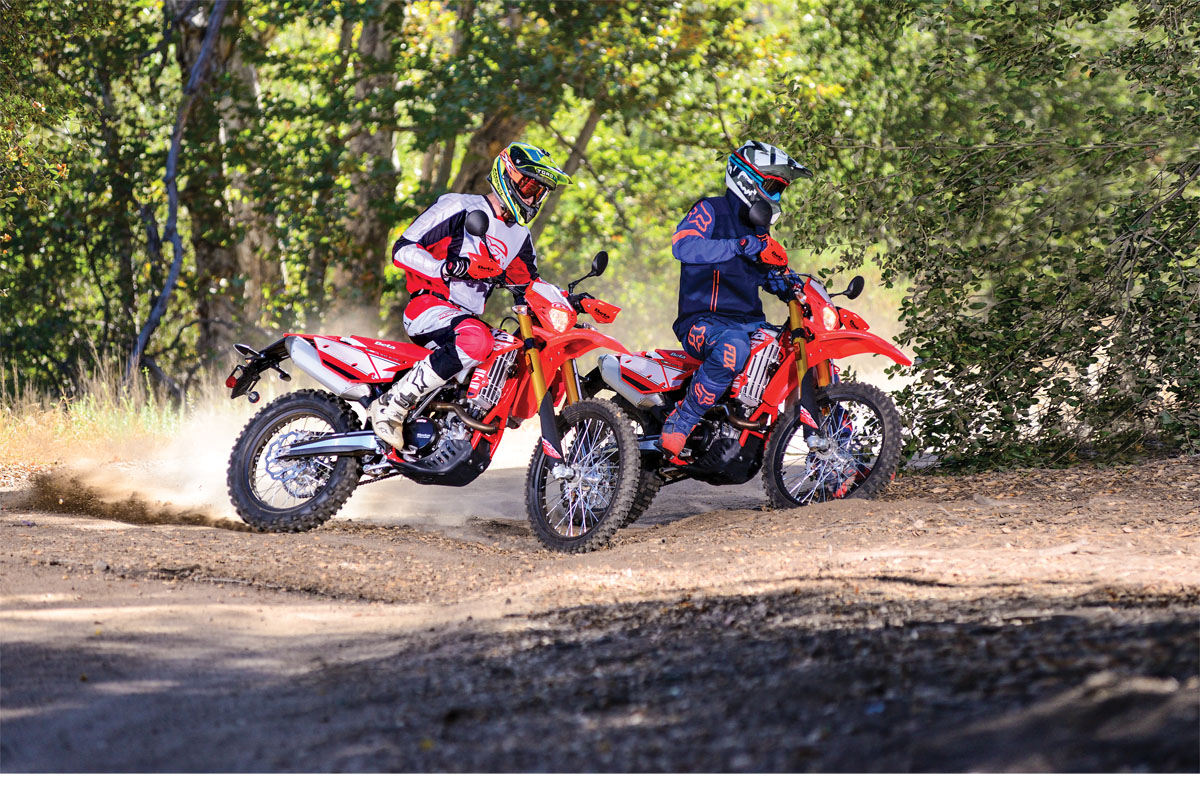 Ever notice that the smallest companies often offer the most stuff? Beta offers five dual-sport bikes, all made in a small Italian factory with 10 percent of KTM’s capacity. The 2017 line has a 500, a 430, a 390, a 350 and a new 125. The “how” of this is fairly straightforward. The four larger models all share the same chassis and even most of the same motor. The differences are restricted to cranks, pistons, cylinders and the other building blocks of displacement. The “why” is a little more curious. Is it really worthwhile to offer such similar motorcycles?
To explore the question, we took what we figured would be the two most similar Beta dual-sport models and compared them wheel to wheel. The 350RR-S that we tested in our December 2016 issue was joined by a 390RR-S. How much of a difference can 37cc and 6mm of stroke make? 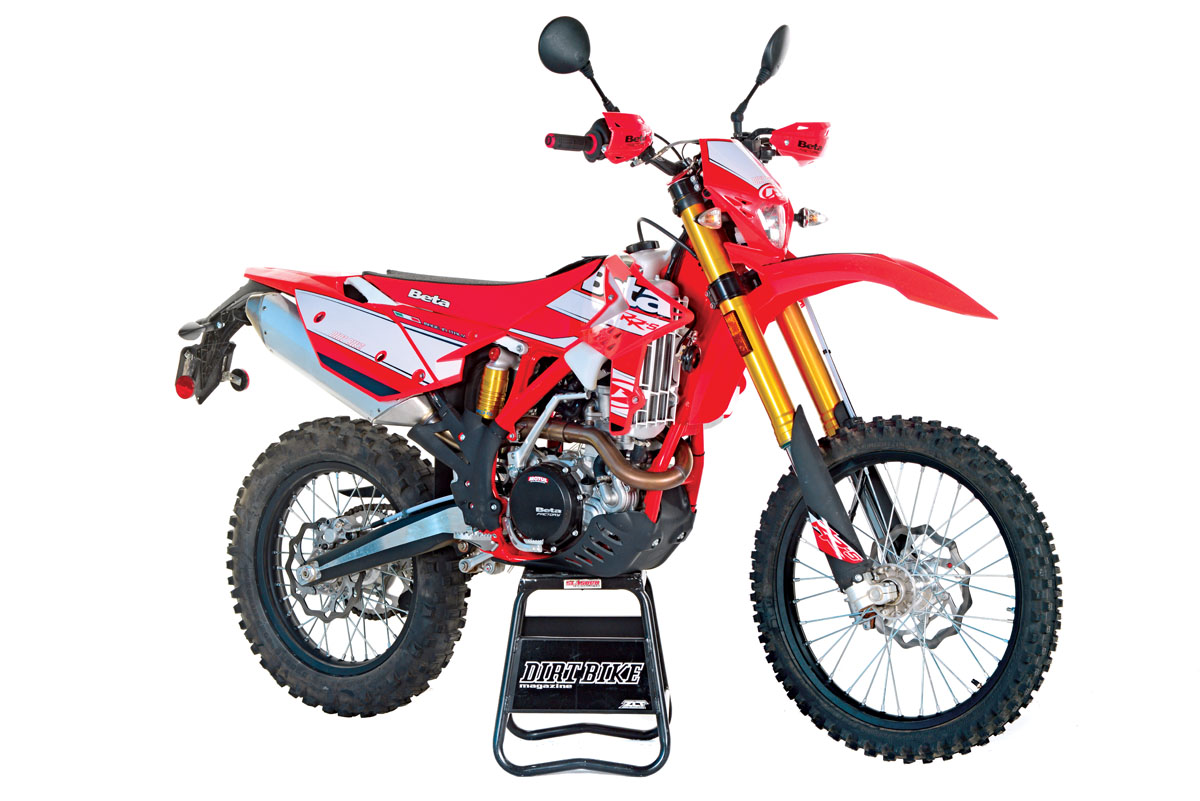 BETA BACKGROUND
To back up a little, Beta is on top of the hard-core dual-sport world right now. The only other companies that are even in the game are KTM and Husky, and as of this writing, they don’t have their 2017 models available yet. Beta is just small enough to sidestep the highest level of scrutiny from EPA, CARB and the DOT. So while the KTM EXCs and Husky FE models are still tied up in the certification process, Betas are readily available. Beyond that, Beta engineers are comfortable with just barely meeting the government criteria for noise and emissions. Bigger companies have more to lose, so they give the EPA a wide berth. As a result, the RR-S models are more like full-blooded dirt bikes. They’re still fully certified and legal but less bottled up and dumbed down.
Another factor to consider is hop-up potential. For a Beta, this information isn’t that hard to come by. Parts and know-how to make a KTM EXC into more of a racer are on lockdown at the dealer level. If you want to take one racing, you’re at the mercy of internet chat rooms and your own experimentation.
At the beginning of the model year, Beta only offered dual-sport bikes in its four-stroke line. Since then, limited-edition racing models have been added, but the differences amount to little more than bolt-on parts. The RR-S models are effectively real dirt bikes with blinkers, horns, evap canisters and approved EFI mapping. The mufflers are reasonably quiet, and they even have spark arrestors—an increasingly rare feature on modern bikes.
The motors are both double-overhead cam four-valvers with electric starting and a back-up kick-start lever. A Japanese Kokusan generator is used, but the EFI system is by Synerject, owned by Continental AG in Germany. The only differences listed between the 350 and the 390 are the crank and 6mm of stroke. The 350 has a higher compression ratio, but both bikes have identical six-speed gearboxes and the same final gearing. In the chassis department, both use identical steel frames with Sachs suspension components. The brakes are Nissin. The gas tanks hold 2 gallons, and both bikes come with Trail Tech Voyager GPS systems as speedometers. The bikes are pretty much loaded with high-end stuff—oversized bars, handguards, full-coverage skid plates and radiator fans, all standard equipment. 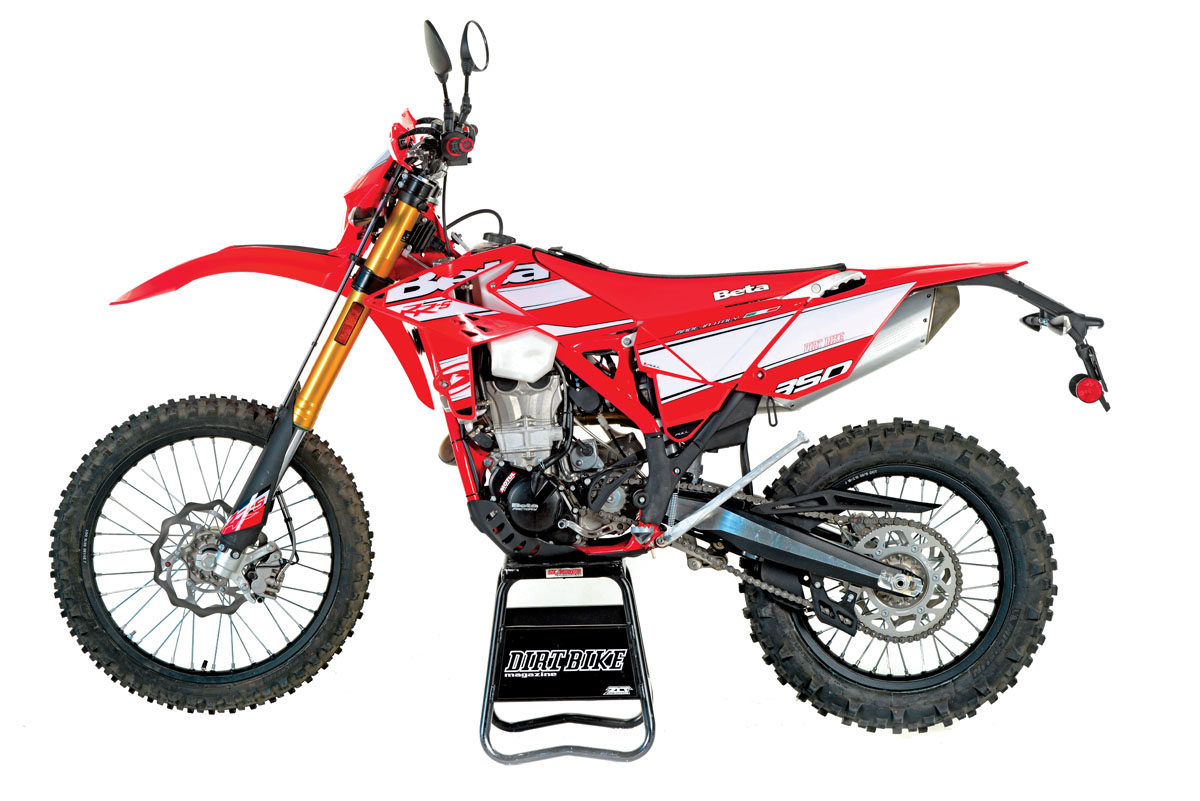 PRECONCEIVED NOTIONS
Back in December, we put the 350RR-S on the cover for one reason—we loved it. The bike ran flawlessly, and the fact that it was street-legal was almost beyond belief. There were no signs of an ultra-lean fuel mixture. It never coughed, sputtered or died. All the drawbacks that we’ve come to blame on the EPA were invisible. The bike was easy to ride in really difficult conditions and helped to bring out the best in its rider rather than demand more of him. Recently, there’s been a troubling trend that has trail bikes—true trail bikes—vanishing in a crowd of rough-mannered race bikes that are more at home on a track. It seems that many manufacturers think all you need to do is put an 18-inch rear wheel on a bike and it’s suddenly trail-worthy. The 350RR-S was refreshing proof that the trail bike isn’t dead; it just has a license plate.
Our biggest reservation about the bike was that it was only a 350. It ran cleanly off the bottom, but there just wasn’t much power to be had down there. It needed to be revved to go fast. This is the type of bike that makes your mind turn to hop-up parts and big-bore kits. And that, in a nutshell, is what drew us to the 390. We couldn’t wait to see if it had the ultimate mix of power and manners. Ready for the spoiler alert? The 390 is noticeably more powerful. It has more torque and more midrange, and it still runs flawlessly. The extra power doesn’t result in anymore stalls or any harsher hit, and the delivery is still excellent. But, most riders still like the 350 better. Dirt bike riding doesn’t always make sense.

THE PROBLEM WITH POWER
For a very long time, we’ve been saying that the most important piece of the handling puzzle isn’t the frame. It isn’t the suspension, the weight, the center of gravity or anything like that. It’s the motor. Power affects the way a bike handles more than any other single component, and we’ve never had that point demonstrated more clearly than here. These two bikes are identical in every way aside from power output. And, the power difference isn’t that big, either. The 390 has quite a bit more output right off the bottom, but the bike still doesn’t have what you would call a hard hit. It just pulls a little better. In the middle, the difference between the two is maybe 15 percent or so. If you put the two bikes in a third-gear, roll-on comparison, the 390 will always pull ahead until both bikes top out at about the same level. The 350 is still building power when the rev limiter cuts in, whereas the 390 has already peaked by that time. As a result, you tend to hit the 350’s limiter occasionally if you’re trying to go fast, whereas it rarely happens on the 390.
All that is what you would expect with more displacement. The baffling part is that the 350 feels lighter and more agile. The suspension works just a little better, and the bike is easier to manhandle. Neither bike is especially light, mind you; they both weigh 263 pounds without fuel. For comparison, a Honda CRF450X is about 5 pounds lighter. In truth, that’s just a number. The Betas (both of them) feel much lighter than a Honda X and, frankly, handle much better.
So, how much difference is there between the 350 and 390? Honestly, not much. When you ride them back to back, the fact that they don’t handle exactly the same is surprising, and it catches your attention. Once that initial curiosity wears off, you don’t think about it again. Both bikes are fun and easy to ride. Both bikes have instant throttle response and run flawlessly. Both have plush suspension, comfortable ergos and great stability at speed. The only time that your thoughts might return to the fact that they aren’t identical is when you’re trying to go fast and you put the motor under a big load. The 350 often wants more clutch work or maybe even a downshift. The 390, on the other hand, is quick to get into the sweet part of the powerband without any extracurricular requirements. You might even think the two bikes are geared differently, which isn’t the case. Both bikes might want lower gearing if they were to be used exclusively on the trail. If your ride has any highway speeds on the agenda, leave the gearing stock; it’s a well-balanced compromise. 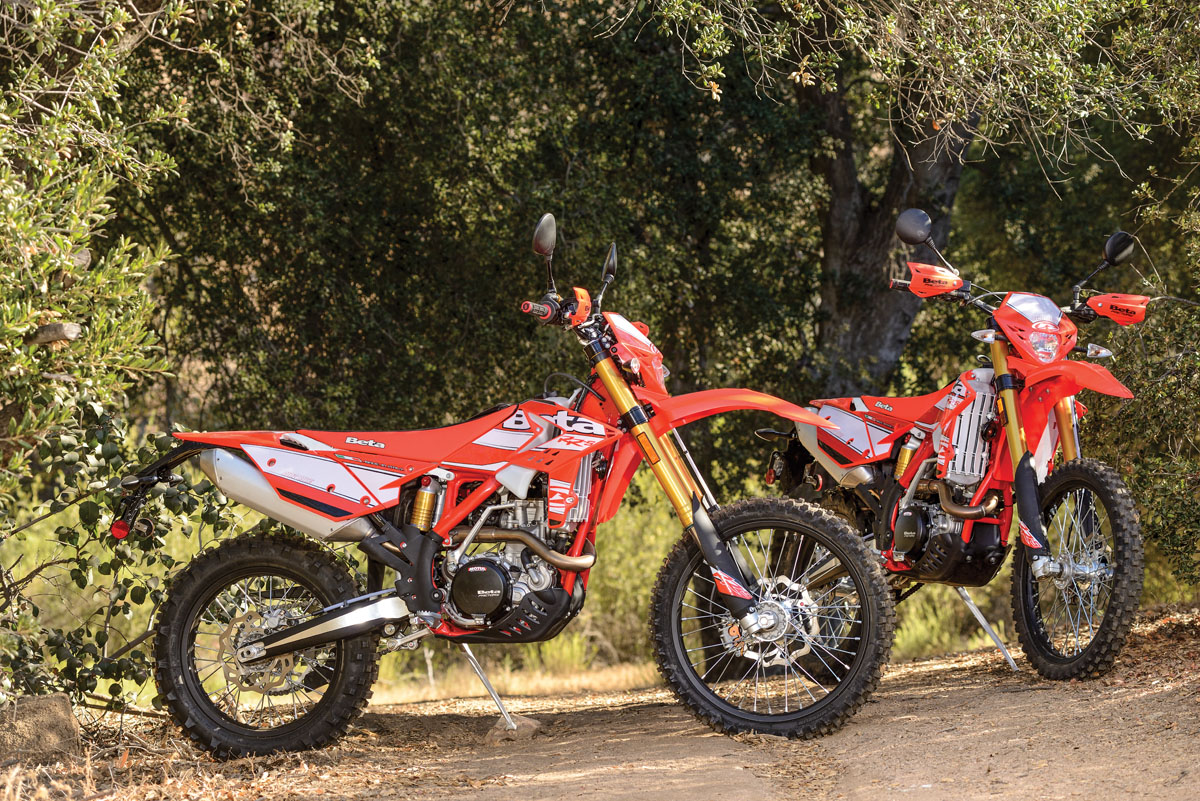 END-OF-THE-DAY REPORT
As we said, most riders said they preferred the 350. There were a few, however, who said they didn’t want to give up the 390’s torque for what they considered superficial gains in handling. There were others who kept forgetting which bike they were riding. When it was all done, the only thing we learned for sure was that it was a very hard decision. That explains why the people at Beta didn’t make the choice themselves. They wanted to leave it to you.