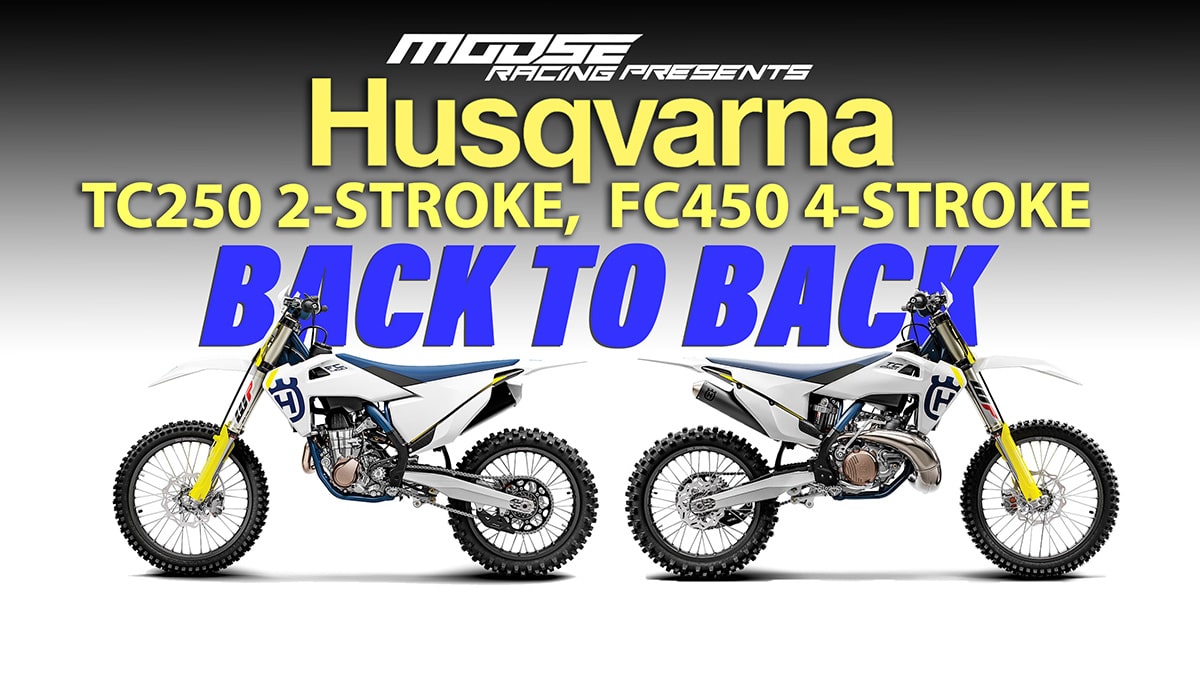 We got a chance to throw a leg over the 2019 Husqvarna TC250 two-stroke and the FC450 four-stroke for a limited amount of time at their recent world introduction at the famed Baker’s Factory in central Florida. It was a rare occasion to ride a state-of-the art two-stroke back to back with a current four-stroke. The two bikes have nearly identical chassis and suspension components, but with completely different motor concepts.

NEW PACKAGE
To be fair, the 2019 FC450 platform was released in December of last year in limited numbers as the Rockstar Edition. Special-edition models not only offer a preview of what’s to come, they also allow factory riders to legally race on the latest technology. For 2019, the 450cc four-stroke and 250cc two-stroke motocross models both received a long list of chassis changes. The most noticeable is the blue powdercoated finish on the chromoly frame. The main frame features an increase in longitudinal rigidity that is designed to improve rider comfort. The TC250 engine position at the swingarm pivot has been raised 1 percent for increased front-end grip combined with new lateral aluminum engine head stays designed to improve cornering and reduce vibration levels. The main difference between the two- and four-stroke frames is the engine cradle. The WP AER 48 fork and DCC WP shock have new settings to match the new frame, concentrating on improving energy absorption and straight-line stability. FC models also have brackets on the frame for an optional skid plate. 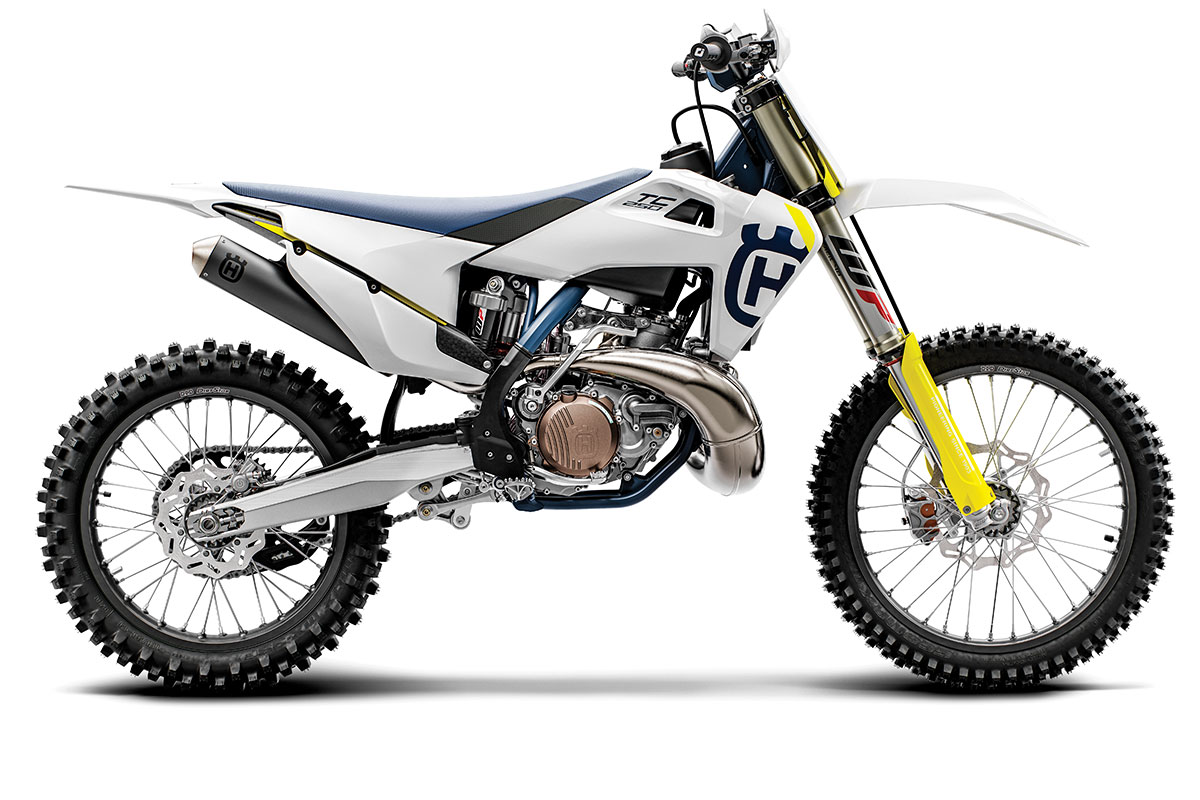 The composite subframe has become a Husqvarna signature in recent years, and for 2019, the frame features a two-piece design that is over a 1/2-pound lighter with 30 percent more vertical stiffness. Overall, the potential wheelbase of the FC/TC has been increased 5mm by enlarging the chain-adjustment slot on the swingarm. This comes directly from the factory race team. The upper, CNC-machined triple clamp has been reshaped, stiffened up and returns with adjustable handlebar positions and an integrated rubber damping system. An all-new Pro Taper handlebar bend is designed to increase comfort by improving the pressure points on the riders’ hands. 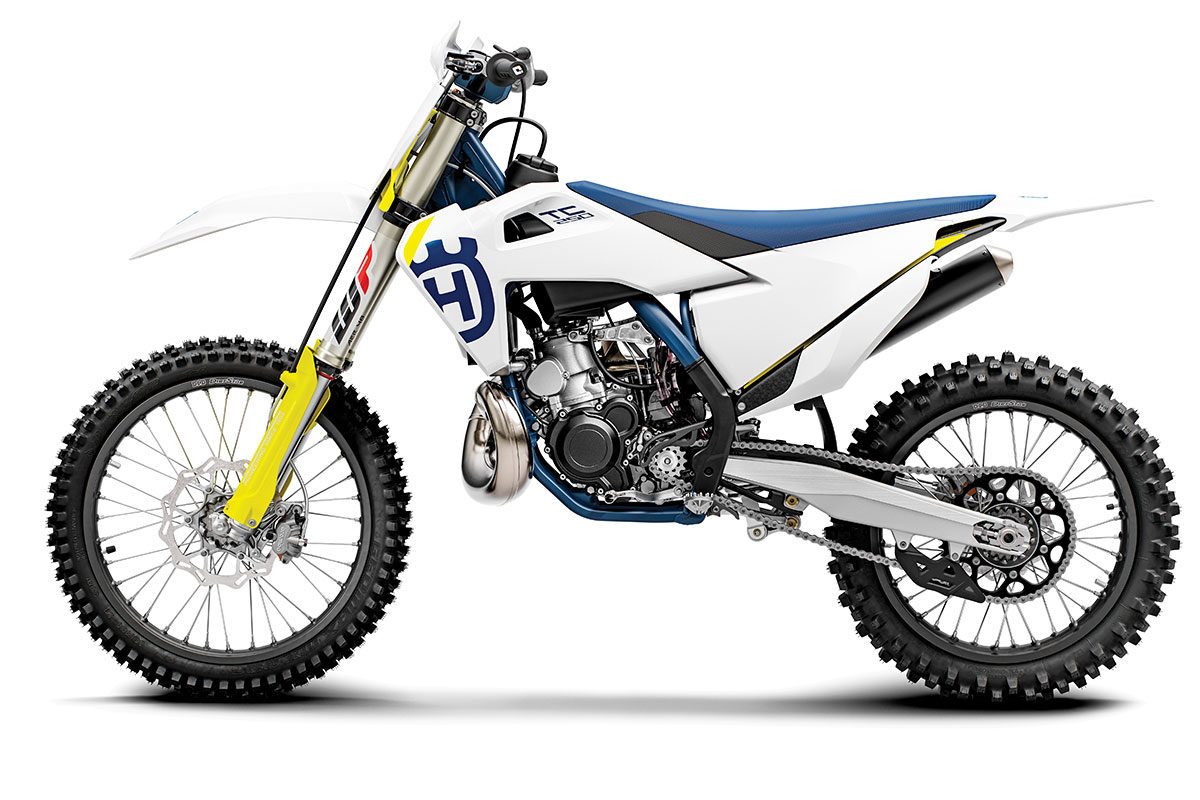 The entire 2019 motocross line features all-new white bodywork and styling inspired by Husqvarna’s Swedish roots. New ergonomics are specifically designed to deliver greater comfort and control with contact points that have been slimmed down to make transitioning between riding positions easier. TC and FC models also feature a new seat profile with a high-grip seat cover.
Black D.I.D rims (now with laser-etched logos) are used with CNC-machined hubs, lightweight spokes and silver-anodized aluminum nipples. The spoke nipples have a new design for 2019 to increase durability and decrease the frequency of spokes coming loose. 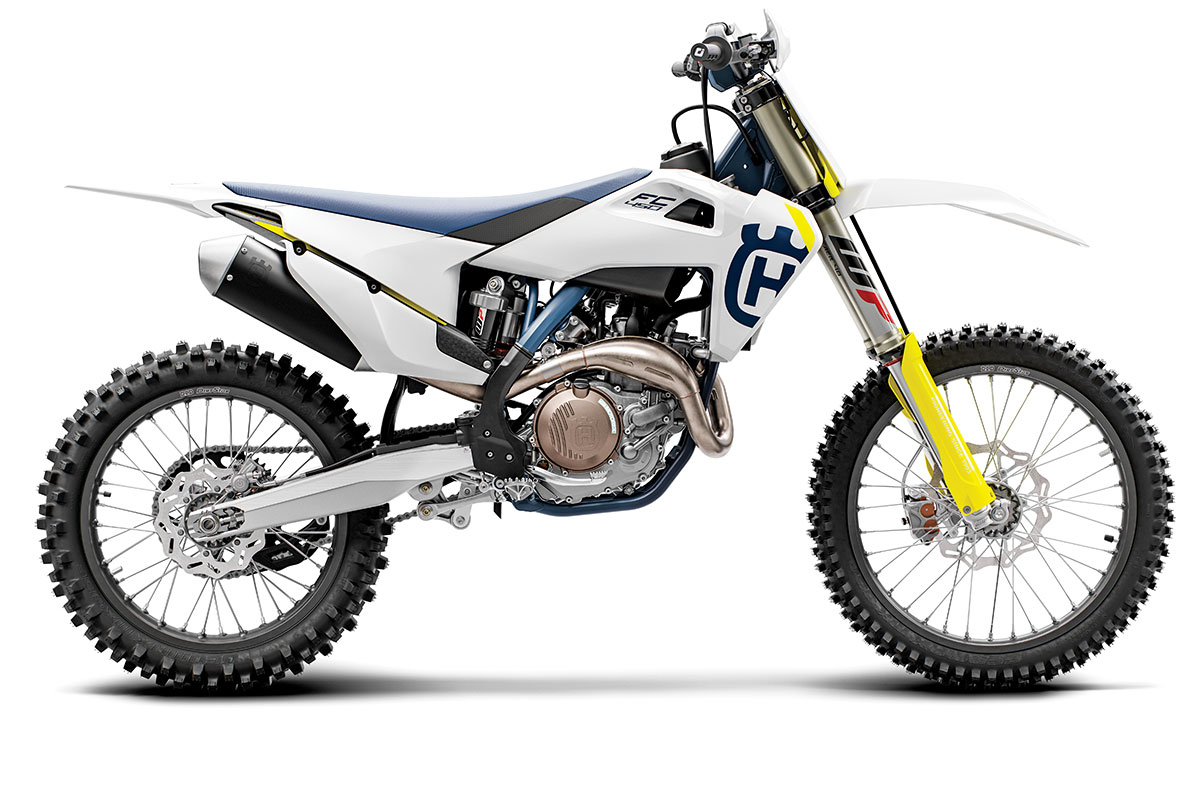 A map switch located on the handlebar of all four-stroke motocross models activates launch control, selects between two engine maps and activates the traction-control feature. Both traction control and launch control feature updated settings for 2019. Two-stroke motocross models have a handlebar-mounted switch that allows the rider to select between two different maps, but they do not have launch- or traction-control capabilities. 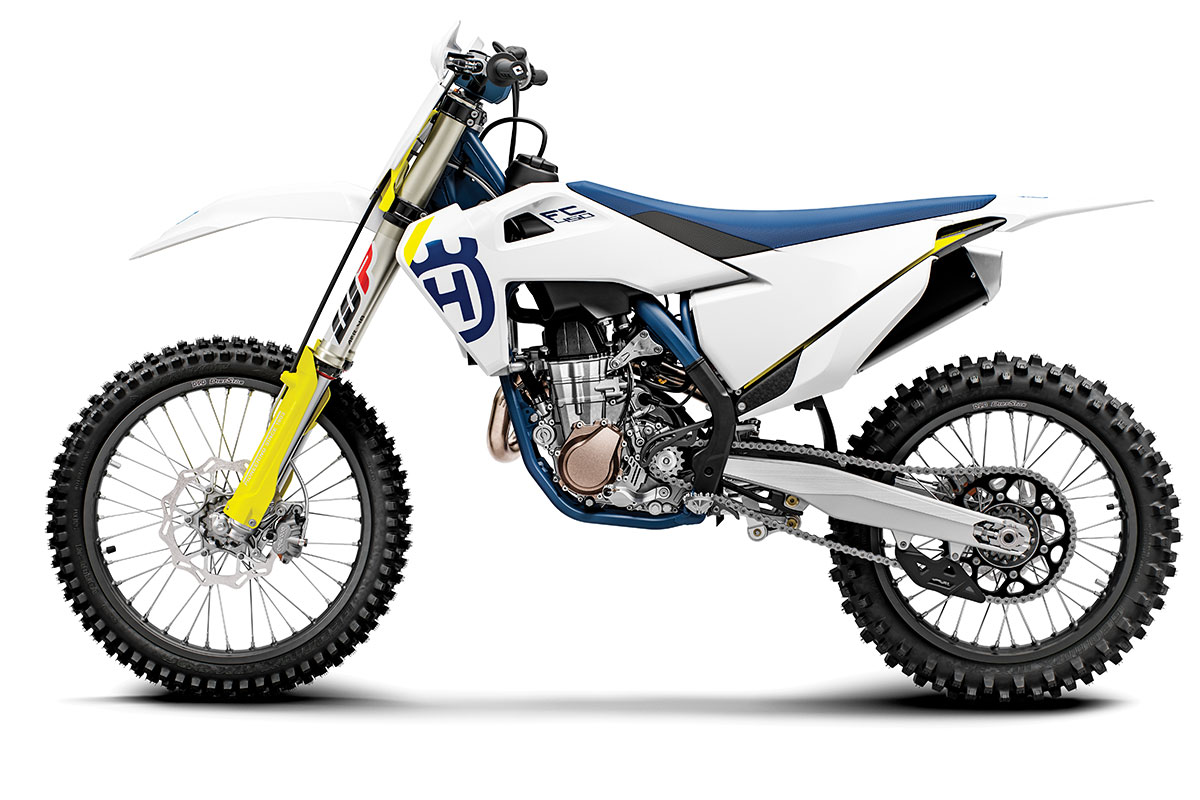 MAKING POWER
Internally, the 2019 FC450 engine is identical to the Rockstar Edition. Compared to the 2018 production model, the engine has a more compact cylinder head design that is now 15mm shorter from bottom to top and 1 pound lighter overall. The new camshaft features an improved cam surface treatment, but the overall layout of the engine is the same as in 2018 with a single-overhead-cam design featuring titanium valves, DLC-coated rocker arms, a CP bridged-box-type piston and a Pankl rod. The entire transmission is produced by Pankl as well with a DDS clutch. An advanced gear sensor selects a specific engine map tailored for each gear. Externally, the FC450 has a brand-new three-piece exhaust system for easy removal with the head and mid-pipes being specific to the 450 model.

Husqvarna made big changes to its two-stroke powerplants, but, surprisingly, not much was changed internally. A new airbox design allowed more volume and a straighter intake path to the 38mm Mikuni flat-slide TMX carburetor that features new jetting specs for 2019. The exhaust on the TC250 was redesigned to improve performance and centralize mass for improved handling. The new exhaust is thinner, provides more ground clearance and is lighter due to the aluminum-silencer mounting bracket. Internally, the exhaust port features a machined finish designed to improved function and performance. The power delivery can also be customized by changing between the two different supplied springs. 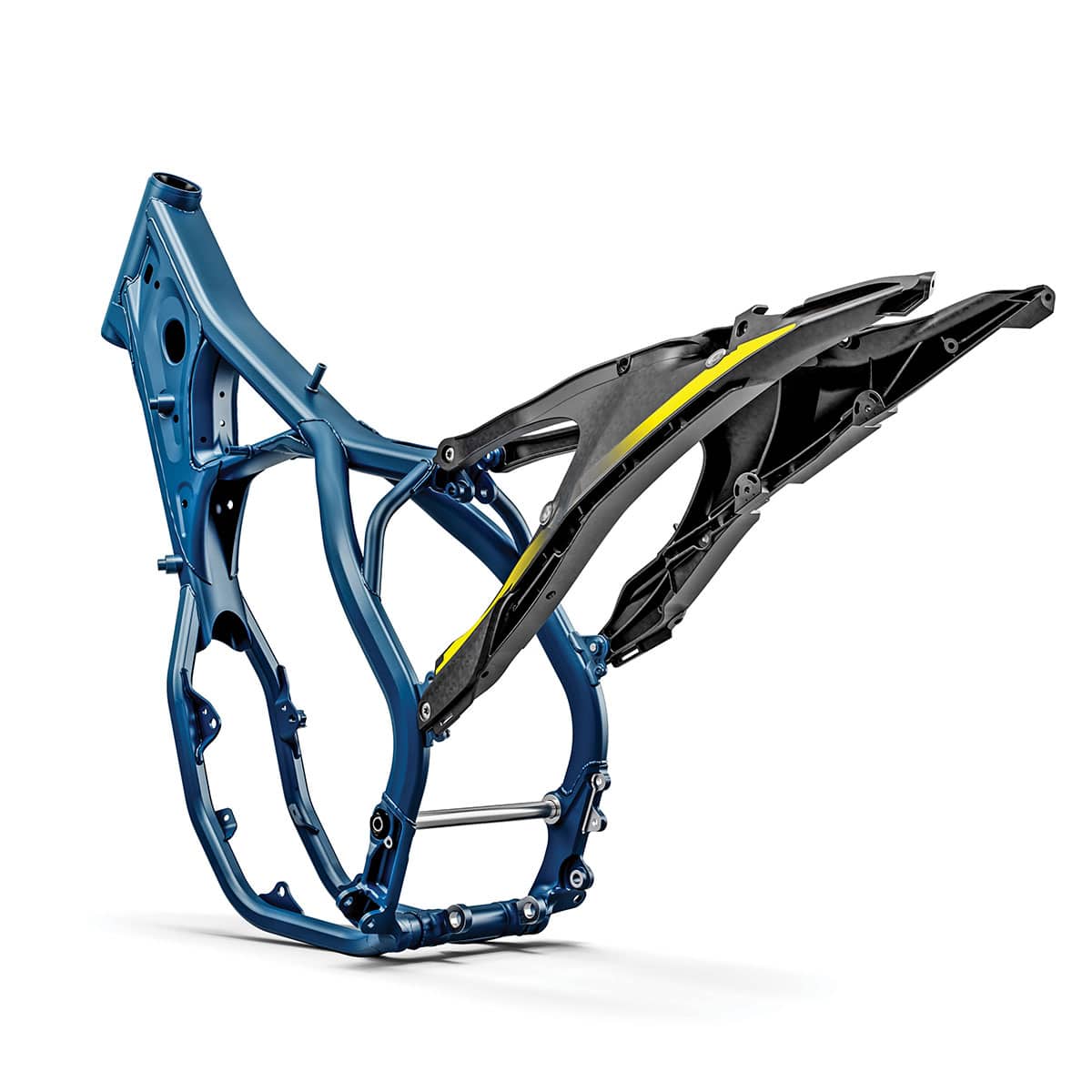 FIRST IMPRESSION
There is no big shock when it comes to the 2019 FC450, and that’s definitely not a bad thing, because the entire Dirt Bike staff likes to ride this bike. Just like the Rockstar Edition, the new bike has more power than the 2018 model without making it hard to control. We got a chance to ride the 2018 and 2019 models back to back. The 2019 is narrower, and some riders commented it had a lighter feel overall. Handling-wise, the FC has a much plusher feel than the Rockstar Edition and, in some situations, may be a bit on the soft side. Up front, the WP AER 48 is still the best air fork on the market. But, compared to traditional spring fork setups, it is somewhat harsh on small bumps. The shock was a bit more lively than we were comfortable with, so we slowed down the rebound and ran the sag between 106mm and 108mm. 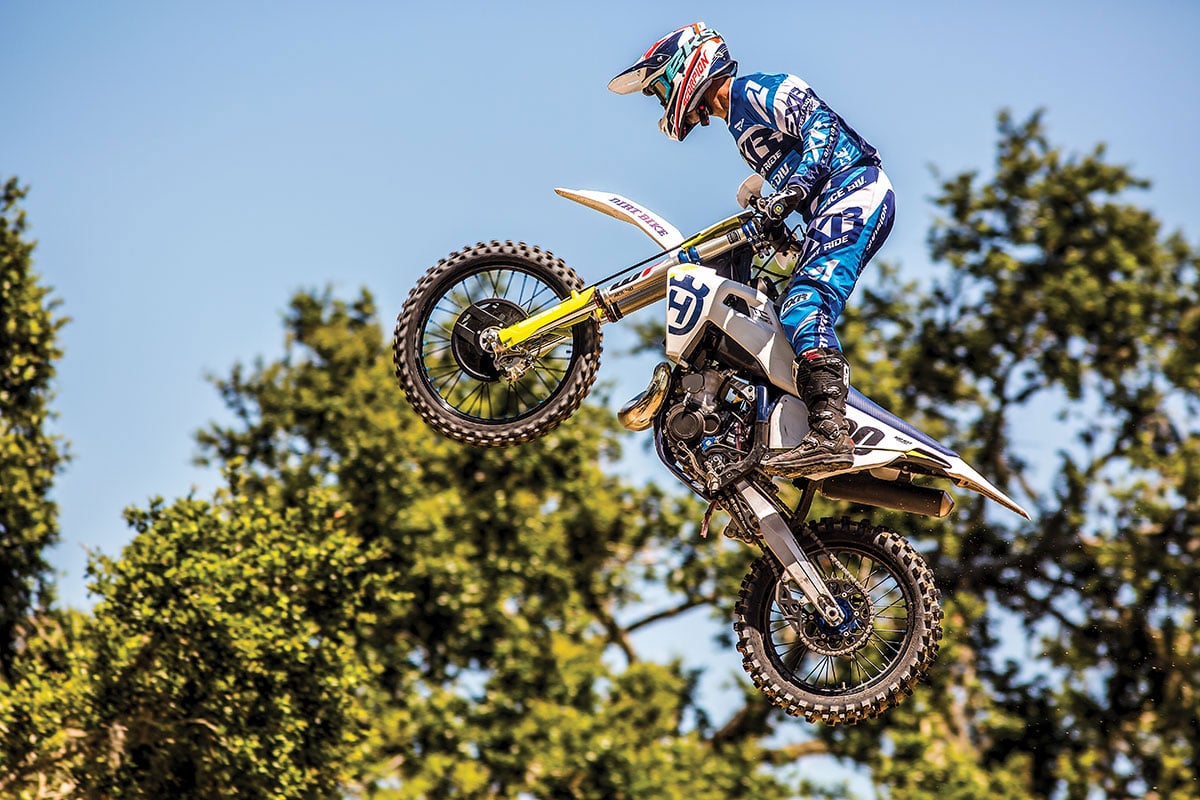 We wouldn’t say we were shocked by the TC250, but we were definitely surprised. The engine performance was not at all what we expected. Last year’s model had an explosive powerband, making it hard to control for some but a blast for more aggressive riders. The 2019 model is a little flat off the bottom and never really displayed that aggressive, hard hit we have come to expect on the TC250. That might sound bad, but for less aggressive riders, it makes the bike easier to control in most situations. In the past, getting the jetting perfect on the Mikuni TMX carb was challenging. The jetting always seemed to come lean from the factory. We think this year’s model might be a tad rich, contributing to the slower feel. Overall handling is improved. The bike has a more precise feel and settles down faster, making it easier to corner. We added a couple clicks of compression to the fork to resist bottoming and slowed the rebound down in the rear for a more planted feel. The TC250 is very sensitive to sag settings. As with the FC450, our sweet spot in Florida was between 106mm and 108mm. It would be nice if the TC250 came with an electric start, but maybe that’s wishful thinking. 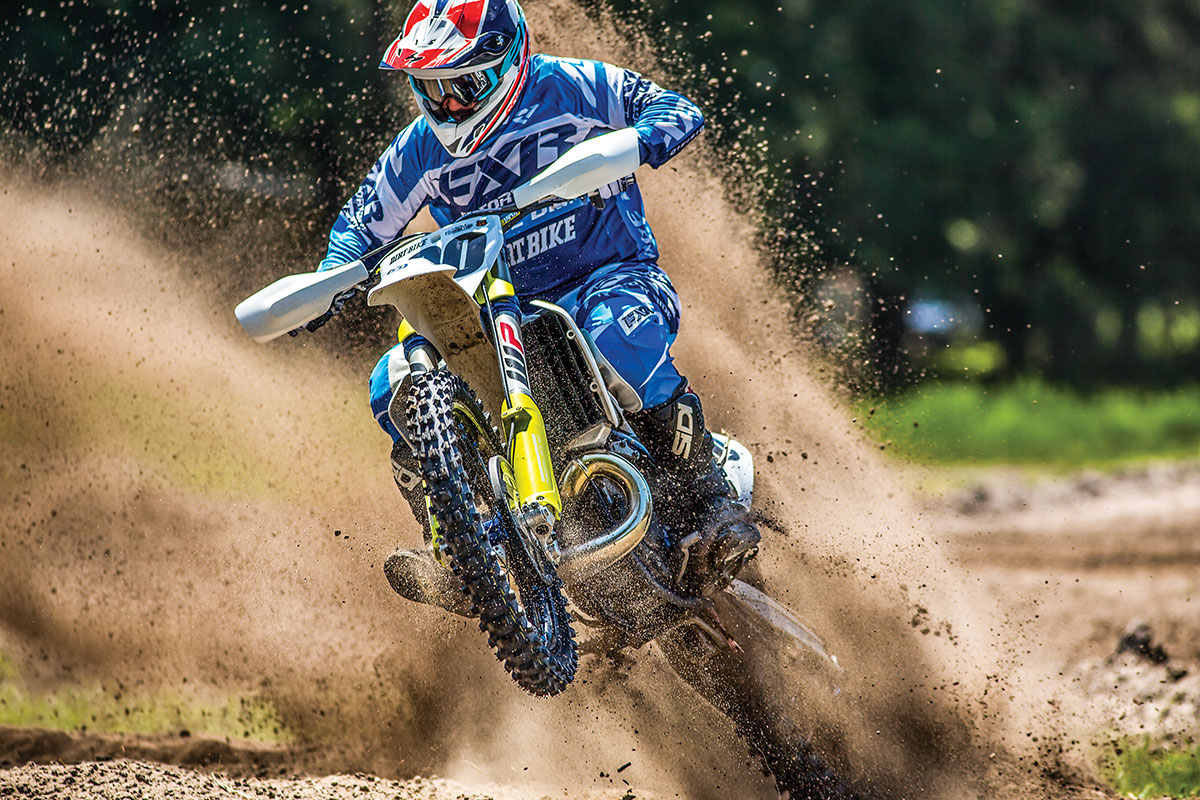 The Baker’s Factory is primarily made of different types of sands and softer dirt that forms deep ruts. We don’t get a lot of opportunities to ride in these conditions, and with very limited time on both bikes, it was difficult to evaluate all the aspects of these two new machines. For those die hard fans who are looking for a bike that will bring back the glory years of two-stroke domination, the TC250 is close, but at Baker’s place, it still was at a disadvantage in both power and handling. In sand, there’s no getting around the fact that the four-stroke is more powerful. On top of that, there continues to be a hard to define element in four-stroke power delivery that allows suspension to work better. The TC250 does have about a 10-pound advantage in weight, and that can certainly pay off on some track. But not here.