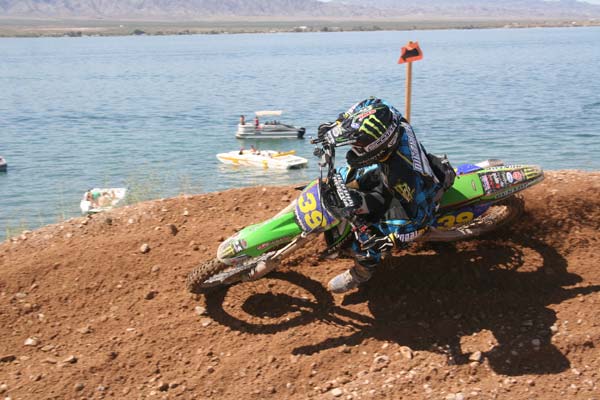 Ricky Dietrich was unbelieveable, setting fastest lap in qualifying and then besting it during the race. He won by more than 1 1/2 minutes.

Monster energy Kawasaki’s Ricky Dietrich took his first holeshot in four years and then checked out on the rest of the field for the next two hours in Lake Havasu at round three of the WORCS Series. After setting the fastest lap on Saturday, Dietrich earned the first gate pick for the dead engine start, took the holeshot and then topped his fast qualifying lap with a series of faster laps to pull away from the all-star field and win by almost 1 ½ minutes by the checkered flag. “I don’t remember ever having a race go this well from start to finish,” said Dietrich. “My last holeshot was when I was still a teenager; I was more surprised than anyone when my bike lit up on the first kick. I had clean air and a great track and a perfect day.”

Taking second was the defending WORCS Champion – KTM/FMF’s Mike Brown. Brown rode magnificently from a poor start, through the field and up into second during the second hour. He put on a charge to try to catch Dietrich, but it was too late and Ricky D was too far ahead to close the gap in the remaining time. “This was a fun, tough race for sure,” said Brown. “Everyone was riding hard and it was a great course. I chose the 250F because I wanted a lighter machine under me during the second hour in the sand whoops. I think it paid off.”

Mike Brown had to come from the back of the pack riding a 250F against a sea of 450’s. Brownie had epic battles all day on his way forward to second.

Third place fell to last round’s winner Kurt Caselli. Caselli also gated poorly and had to race through the pack of nearly 40 Pro’s to reach the podium. He was closing in on Brown when the final flag flew and stopped his charge. “I feel great,” said Caselli. “I wanted another 2-3 laps and I might’ve caught my teammate. But I’m happy to stay consistently on the podium and keep my eye on the Championship. That’s the way to get the #1 plate in this series, stay consistent, finish every race and win when you can.”

Kurt Caselli also chose a 250 for Havasu, he raged through the second hour for third and still holds the point’s lead.

Valli Motorsports’ Kyle Summers battled his way into fourth after a fierce four-way game of swing-arm tag between himself, Brown, Gary Sutherlin and Robby Bell during the latter part of the first hour and the beginnings of the second hour. Fifth went to Justin Soule who also fought his way into the top five after an off-track excursion left him to ride most of the race with an injured knee (MRI report to follow).

Kyle Summers kept himself and his bike together for the whole two hours. After battling with Brown, Caselli, Sutherlin, Bell and Soule, he finished just off the boxes in fourth.