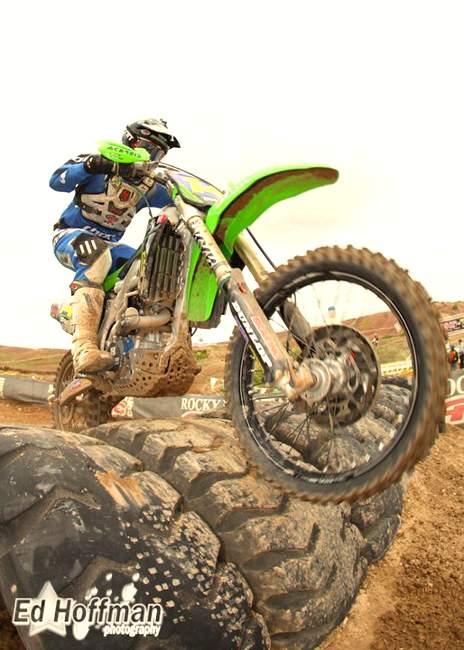 We had this really long uphill start and it was actually pretty cool. I knew I needed a good jump off the gate to have a chance at being up front. I had a good start, but got pulled a little going up the hill. By the time we got around the first corner I think I was around 8th. The first few laps were a little hairball and I knew I needed to be right there with the group I was in. I had some great racing with Sutherlin, Bell, and Bondo. We kept it clean and it wasn’t until Gary went down that we were able to get a little gap, and then I think Bonds had some sort of problem. At the halfway point I was in 7th and could see Robby was starting to pull away a little. Then after I pitted I was able to close in on Tye. However, when the checkered flag came out I was around 10-seconds out of 6th so I finished 7th for the first day. Caselli won with Brown in 2nd and Robert in 3rd, who had to come from the back and put in a great ride.

I felt pretty good about how things went yesterday and knew I could do it again. Unfortunately, as soon as the gate dropped it didn’t start out to well for me. I got pinched off right out of the gate and hit another guy’s rear tire and almost went down. By the time I went through the first corner, I was dead last and just had to start picking guys off one at a time. The roost was so bad and I really can’t remember the last time it hurt so bad. There were times I had to basically back off and wait until there was a better spot to pass. At the halfway point, when I pitted, I think I was around 11th. I was able to get into 9th and kept closing in on Rookstool, who was in 8th, but then I messed up in the Endurocross section and had a tough time getting the bike started. I closed the gap a lap later and then went over the bars in a drop off. I lost some more time, but still had two laps to go. I saw I was making up time again and figured it might be close at the end. I ended up being about 10-seconds off and had to finish with a 9th for today. Caselli took the win again with both of my teammates 2nd and 3rd (Robert and Soule). They finished within a second of each other, followed by Brown in 4th.

It was nice to be running towards the front again. I’ve had some bad luck during this year’s WORCS series and was fighting with some injuries, but the last couple events I’ve done have been a lot better. The bike has been working really well and I know my fitness is closer to where it should be (actually could’ve used more laps in both motos this weekend). Hope to work on my sprint speed a little more in the next couple weeks.

The weather this weekend was actually really good and we would get rain showers off and on, but never during the races so it was good. The course had a nice mix of terrain and it made for some great racing.

moved up to 8th in points and now I’m only one point out of 7th. The season didn’t start out that well, but I feel I’m riding a lot better now and healthy again. The top four or five guys are going really fast, but I’m just going to try to ride my pace and be consistent and see how it goes.

Two of my Kawasaki buddies had some bad luck. Soule was on it the first day, but had an issue when he hit his shifter in a rut and had to stop and fix it. He was able to pull off a third on Sunday. Then today Sutherlin was riding really well, but tweaked his knee pretty good and had to pull off. Hopefully it’s nothing too bad.

As most of you know I’ll be racing the ISDE again this August (Finland). I was going to make some new t-shirts to help out with some of the cost, but I still have a couple hundred from last year (ordered to many 🙂 I can’t really afford to make new ones so I put my last year ones up on my site again for half price. Please check them out on my site! They’re only $10 and really cool shirts. I could use the help. www.destryabbott.com

I’m also doing a fundraiser here in Arizona July 24th, out at Grindingstone. I’ll be posting the flyer on my site and my Facebook page. Hope to see you guys there!

I found something out about my longtime mechanic (Jonny) this weekend. Let’s just say it didn’t surprise me when I did. I don’t want to break the news, so I’ll let him tell everyone (if he wants to). 😉

I attached some photos from Ed Hoffman (https://www.edhoffmanphotography.com) and Mike Farmer. Thanks guys!

I have this weekend off and then it’s another WORCS race up in Northern California (Honey Lake). It’s usually really good and I’m looking forward to that one.