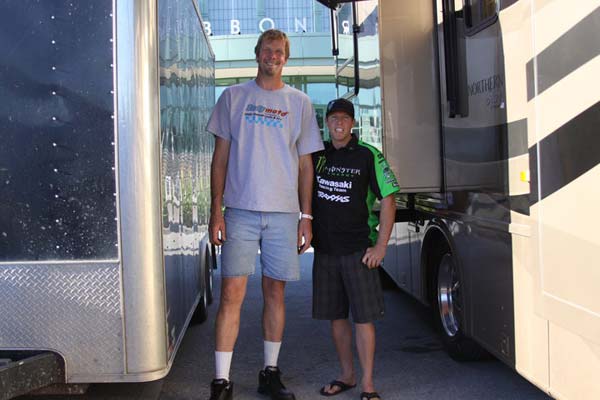 Race Day:
We get two 5-minute practices and this was going to be my first time riding or racing the 2011 250f (see other notes). I knew I wasn’t going to get a lot of time to figure out the bike since it wasn’t mine, but I was going to make the best of it. I actually felt pretty good and was really impressed with the new FI bike in the short amount of time I got to ride it. After that I did my hot lap and made a few mistakes, but still had a decent gate pick. The worst part was afterwards when I realized I had a ton of fast guys in my heat (more then usual). It wasn’t going to be an easy night!

Heat 1:
I wasn’t able to practice any starts and it showed. I had a horrible start, and that’s usually one of my strong points at these races. They only took the top two to the main, and after my bad start I was able to make it up to 4th at the finish. Taddy won, followed by my teammate Justin Soule who took the final spot. I had Kevin Rookstool right in front of me with Coltan Haaker in 5th (you can see it was stacked).

Semi 1:
This is always a tough one since they only take the winner to the main. I had about a 4th place start, but made it up to 2nd right behind Rookstool. I tried to make some passes, but just couldn’t make any stick. Then Coltan put a good pass on me in the big rock corner. The three of us had a great battle going, but Coltan took the win with Kevin and I all finishing within bike lengths of each other.

LCQ:
A place I didn’t want to be in 🙂 I had another horrible start and was probably around 7th. It was a short race, and I saw the leaders checking out and knew I had to really push it. I made some aggressive passes and got into 3rd with clear track. I was about 5-seconds behind Rookstool. I actually felt the best I had all night now,  and started to do a few obstacles a lot better and was making up time on Cody Webb and Rookstool. By the time the checkered flag came out I was right on Rookstool’s fender, but it wasn’t good enough! That was the end of my racing for the night.

Overall Summary:
I do have to say this is the best I’ve felt on the bike since early in the year (before my injuries). I rode way better at this EX race then I did at the first round (and I made the main there) and as the night went on my speed kept getting better. That’s just the way EX racing is and I think that’s why it so fun to watch too. The training is starting to pay off again and it feels good to be getting closer to 100% again. I just want to finish the year out strong and get ready for 2011!

Other Notes:
This race wasn’t on my schedule, but on Tuesday evening I received a call from Jason Smigel at Kawasaki. He asked if I could take Ricky Dietrich’s spot since he’s still on the injured list, and I definitely jumped at the opportunity. I love EX races! The only problem was that I haven’t practiced any EX riding since the first round and had to ride Ricky’s 2011 250f which I’ve never ridden. The 2011’s are FI bikes and I was blown away by how good it was. I definitely didn’t have the starts figured out, but other then that the bike was really good. I just wish I could’ve had more time to practice and prepare for it!

I’ve qualified for the main event for the last five straight EX races, but my streak ended here. I’ll try and see if I can get the streak going again:)

Here’s another cool video clip from Dillon at ShotMaker.  https://www.youtube.com/watch?v=IQwZrAlAtWM

This is a video clip of the track walk I did with Monster Energy Kawasaki at the first round. It shows how tough some of the obstacles are.  https://www.kawasaki.com/racing_news/article.aspx?id=1439

My next race is scheduled to be in three weeks (WORCS), but I might be racing the Washington EX race if Ricky isn’t 100% yet. We’ll wait and see.

I was super pumped for my riding and training partner (Gary Sutherlin). He finished a strong 4th in the main event and had the speed to be on the podium. He’s been working really hard and deserves his great finish!

As a lot of you might know I’m a big basketball fan and love playing it too. I got to meet Rik Smits who was a big time player for the Pacers and got to talk with him for a while (picture attached). He’s really a cool guy and a good rider too. He finished on the podium in the vet class and it was awesome to hear the Indiana crowd cheering for him!

I’m working with the guys from the EX series this week to purchase the 100 tickets for the final round in Vegas. I’ll be sure to post more on my web site and Facebook fan page on how to purchase them. It should be a pretty cool deal!

I attached some photos from Mark Kariya and Kenny Jones. Thanks for the help guys!

I also need to thank Chappy for being my mechanic for the weekend. It was like the good old days! He did some wrenching for me when I started with Kawasaki.