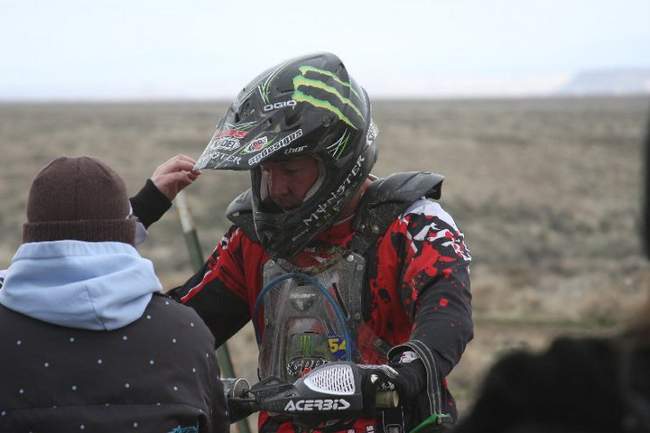 I wasn’t worried about my start, because it was pretty wet here and it was going to be easy to key off other riders. We weren’t able to ride the start so I walked it once and called it good. I had a good jump, and by the time we got to the end of the bomb I was in third behind Kurt and David. The first loop was around 42-miles and it was one of the best times I’ve had racing in a while. There were four of us (Kurt, David, Jacob, and myself) that pretty much stayed within 10-seconds of each other the whole time. It was almost like a good fast trail ride. You could key off the guy in front of you so easy that it was better to not be leading. I wasn’t worried about trying to take the lead since I was having fun where I was at. Kurt and I would be giving each other thumbs up while he was running 2nd and I was in 3rd. Then I would look back and Jacob would be right on me so I would give him a thumbs up too. It was really cool!

After the first 40-mile loop was over, all four of us were pitting at the same time and then were back off for the final 62-mile loop. David was still leading a little ways into this loop, and I could tell the pace was starting to pick up. We were riding up this road into the mountains and were going through patches of snow. The puddles were like ice in spots and you really had to ride smart. I actually had a few close calls, but still kept it on two wheels. Then we started working our way down this cool single track stuff and that’s when I saw Kurt take a big soil sample. He hit a rock and went flying over the bars. I slowed down to make sure he was good and he said he was, so it was now on to David. As we got to the bottom, I decided this was my time to try to take the lead and see if I could put a gap on everyone. I got around David and really pushed it. I actually built up a good 10-second lead so no one could key off me (which was actually a lot at this race). I lead for about 15-miles and then I came into a check where the guy that was marking my card must’ve not liked me.

I stopped and he wouldn’t mark my card. I’m like mark my card, but he wouldn’t! Then the other guy yelled mark his card, but he still wouldn’t so he ended up jumping over and marking it for me. As you can imagine I wasn’t too happy since David was on me as soon as I left the check. Not far after that we made a sharp turn on a road, and both David and Jacob went to the inside and both passed me. I got a little dusted out so I slowed down and as soon as I did Kurt went by. Within a mile I was leading and then went back to fourth. I just followed them into the alternate gas where they did a great job getting me out fast. For some reason as soon as I left, I turned into a Spode and forgot how to ride. I had a few close calls and just really messed up a few sections. About 5-miles later the top three guys were gone and I would say the leader had about a minute on me. I could see them way up there, on the faster sections, but it was so hard to make up time without keying off someone. There was about 25-miles left and it turned into a full sprint for me.

I was pushing it really hard and was slowly closing in. Then I saw David and he looked off the pace (I later heard he took a big soil sample) and was able to get around him. I was definitely closing in and now could see Jacob was leading with Kurt right on him. By the time I got close enough, I knew we had to be close to the finish since there were so many spectators around. When we got to the finish I was about 15 or so seconds behind Jacob and 25-seconds behind Kurt; who was able to get around Jacob right towards the end. The race took a little over 3-hours and it was definitely a great race to determine your fitness.

It was definitely one of the best times I’ve had racing in a while, but I was a little disappointed with my third. I really felt like my speed was good even though I knew it was going to come down to the end with the four of us. I just tried to put myself in the right place, but messed that up after the alternate pit. I’m still happy to get another podium and I’m the only rider to be on the podium at all the races so far. Hopefully the consistency will pay off in the end (which is my main goal).

I owe a huge thanks to the Argubright’s for taking my bike up to the race and helping us out. It saved us a 16-hour drive!

The club did a great job on promoting the race and putting a great autograph session together at a local Ford dealership. A ton of people showed up, so it was pretty awesome.

Not to many clubs put together a pro purse and that was way cool since times are a lot tougher for all of us. The race course was really good to, even though they had to change a few things with all the rain and snow.

It was so much fun riding with Kurt, Jacob, and David. We all kept it clean and I knew neither one of us were going to take each other out. That was definitely a race I’ll remember, since you don’t get to do that in too many desert races. Any one of us could’ve won that race, but Kurt played it out the best. It actually reminded me of road biking. You would try and break away, but then the pack would just reel you back in. It was all about setting yourself up for the end of the race.

On Friday night David Kamo had a lot of people over to his house for some dinner. Kit made some awesome food and even hooked us up with some cookies (which were so good). We had a blast and I even won the 50 wheelie championship, so I get to run the #1 plate there next year!

My next race is this weekend for the WORCS series in Lake Havasu, Arizona.

The photos from Megan Blackburn (Offroad-Journal). Thanks Megan!