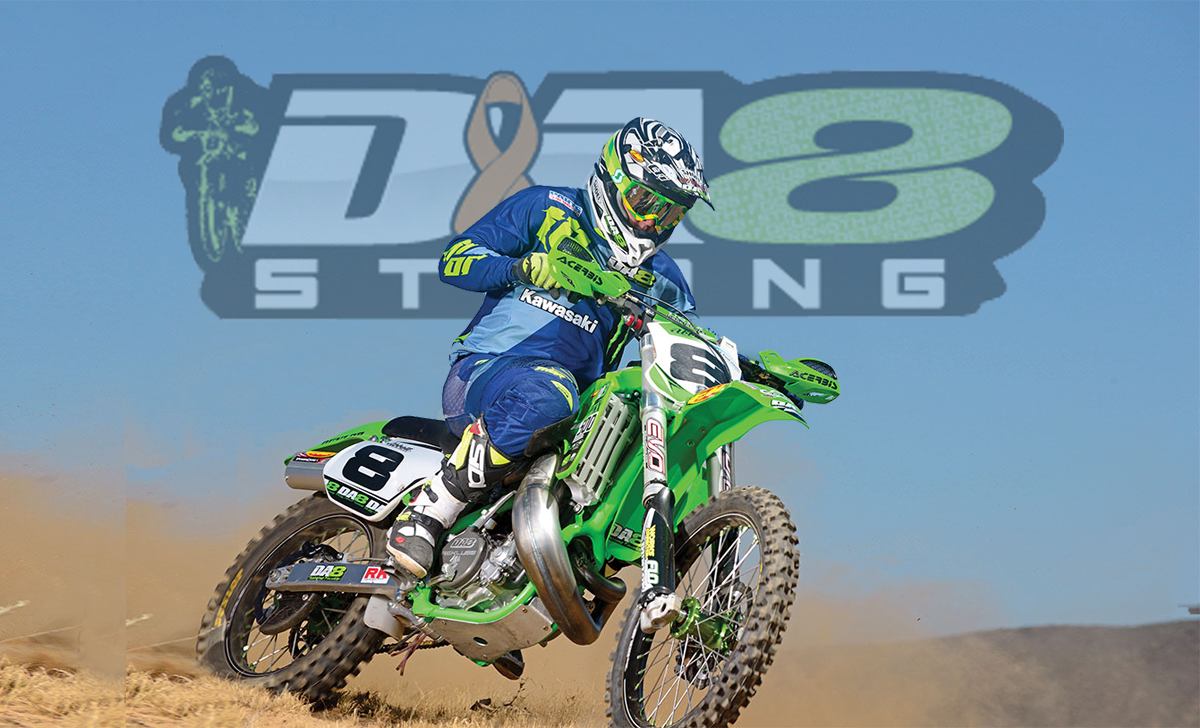 Editor’s note: The idea for KXZilla was conceived almost a year ago, and the bike was completed for the August Print issue of Dirt Bike. Three days after the press date, Destry Abbott was diagnosed with Leukemia and has since been fighting the battle of his life. The bike then became a symbol of strength and courage. On Destry’s birthday, July 13th, 2016, the bike will be raffled off to a new owner, with the proceeds going to help the Abbott family in their joint battle. The last day to buy a ticket is July 10. To make a donation and earn a chance at being that winner, click here.  Here’s the story of the bike as it appeared in the August issue.

A handful of riders in the off-road community come to mind when Kawasaki’s mighty KX500 is mentioned. Danny Hamel, Ty Davis, Larry Roeseler and Destry Abbott all stand out as guys who could do amazing things on the 500cc beast. The bike was originally built primarily for the AMA 500cc National motocross series, but it quickly established its off-road dominance and, despite relatively minor changes throughout its last 20 years in production, remained competitive. This got us thinking: What would happen if we threw some 2016 technology at the mighty KX500? So, we decided to team up with off-road racing legend and 19-years-plus veteran of Kawasaki’s factory off-road racing program Destry Abbott to build a modern-day version of this iconic machine. The following is what went into bringing the “KXzilla” to life!

THE KXZILLA TAKES SHAPE
In the beginning, KXzilla started off as a very used 2000 KX500 that was on its last legs and rapidly heading for that corner of the garage from which no bike has ever returned. Needless to say, Destry and the crew had tons of work to do. The bike was completely stripped down, with the engine getting some much-needed TLC and the entire chassis receiving some major updates. Every part of the machine would be attended to, and Derrick Ball would be a huge part of the process. Rather than just transplanting the engine into a new 450cc four-stroke chassis, Destry wanted to use the strength of the older bike and add technology from the newer model to make the overall package better. So, the steel frame stayed.

Having such a long relationship with Kawasaki’s factory racing program, Destry was able to grease the right wheels. Kawasaki provided all the genuine OEM parts needed to rebuild the KXzilla powerplant. While the engine was apart, key areas were cleaned, but overall the engine was kept pretty much stock. One thing that stood out like a sore thumb to the KX500 faithful was the addition of an entire custom right-side outer case and clutch cover.

Back in Destry’s 500 glory days Kawasaki made these for factory racers but never available to the public. This is still true today, and all the trick parts from that era have long since disappeared. This just meant the crew was going to have to make one! The stock unit was laser-cut, machined, drilled and tapped so that a 2016 KX450 Rekluse clutch cover could be bolted up. No more taking off the entire right-side outer cases just to install new clutch plates. 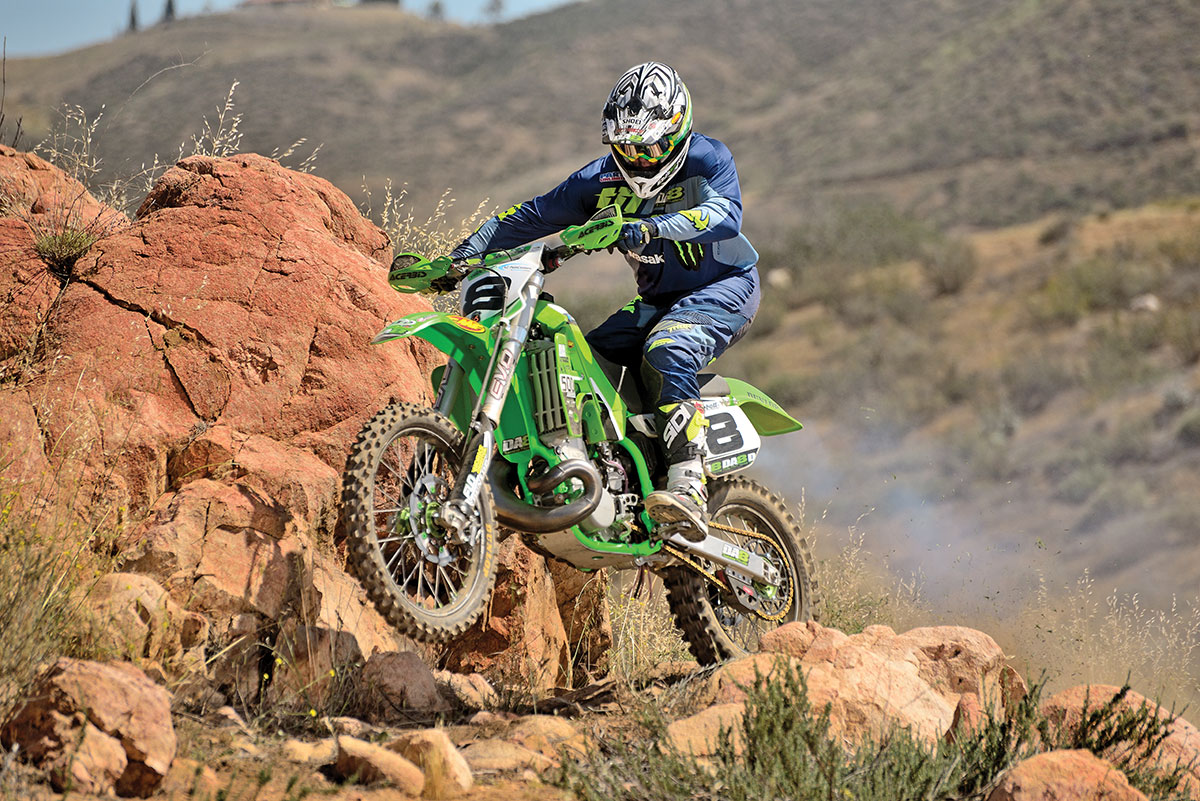 The front and rear suspension units were replaced. The entire front end off a 2016 KX450 was used, and GPR built a triple-clamp system that not only meshed the old with the new but incorporated the use of a GPR sub-mounted Version 4 stabilizer system. Using an entire front end off the 2016 KX450 allowed us to upgrade a few things all at once. KXzilla would now be equipped with Showa air forks, an upgraded front braking system with a 270mm Flo Motorsports oversized rotor, and KX450 plastics for a much-needed cosmetic upgrade.

The shock was also replaced with a newer unit. This required the Showa shock to be modified internally and required a different linkage system. Once the suspension was snug in its new home, Destry ripped it off and had the crew at EVO Suspension set it up for off-road grand-prix-type racing. The KX500 swingarm was also modified so that the 2016 KX450’s larger rear-brake caliper and rear axle could be utilized.

With all the major modifications out of the way, it was time to bolt on all the aftermarket products available that would either improve performance, enhance the look or lighten up the beast. Starting in the rider cockpit, Derrick Ball installed Flexx handlebars, A’ME half-waffle grips, a Motion Pro clutch cable, a throttle tube and Acerbis handguards. Motoseat supplied a tall black gripper seat cover for that clean factory look, and Silo Creations came up with the retro-looking graphics design. We did include a few bolt-on items to give the KXzilla a little more growl, including V-Force reeds teamed with an FMF works-style pipe and Powercore silencer. A Works Connection aluminum skid plate was installed to protect the undercarriage, along with an Elite clutch perch, brake caps and hole-shot device. The custom DA8 Rekluse billet clutch cover was used, but Rekluse doesn’t make a clutch for the KX500, so an OEM unit did the job. Destry topped off the build with Nore-Worx green hubs and Excel A60 rims to give it a little bling and additional strength.

IT’S ALIVE
Hey, 500cc of anything can be intimidating! We don’t want to say we were scared to throw a leg over the KXzilla or anything, but there were a few butterflies in our stomachs for sure. Starting the beast is definitely a process. Do it wrong and your leg can be ripped out of its socket; do it correctly and all is right with the world. It has been a few years since our staff has tested a new KX500, and some staff members have never had the pleasure of riding one, so getting a chance to burn some gas through the KXzilla was an interesting experience for everyone. KXzilla is a sweet bike to ride. The power comes on smooth but hits hard when it needs to, and if you ride it in high gear, it’s happy and will produce smiles all day long. The suspension upgrades are fine-tuned to Destry’s riding style, but EVO did a great job providing just enough bottoming resistance while still giving it a plush feel. The best part about the entire build was watching Destry rip across the desert wide open with a huge smile underneath his Shoei helmet. Thanks for letting us be part of this build, Destry—DA8 strong! 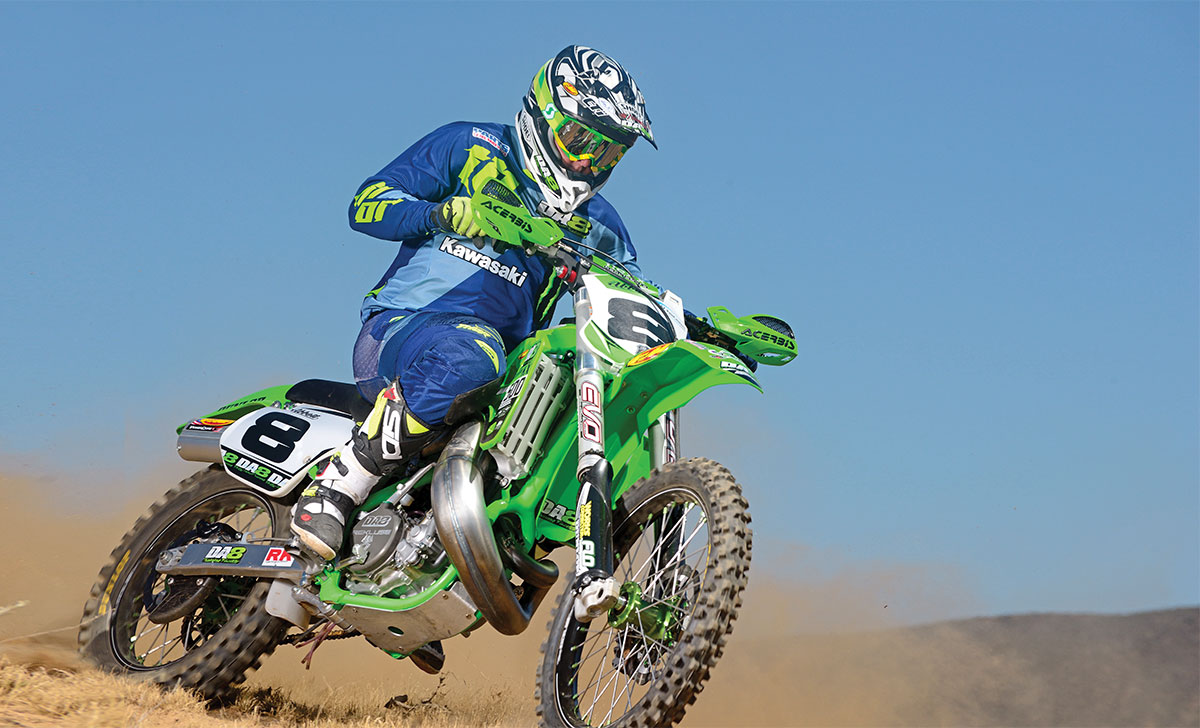 THE SUZUKI RMX450Z IS BACK!