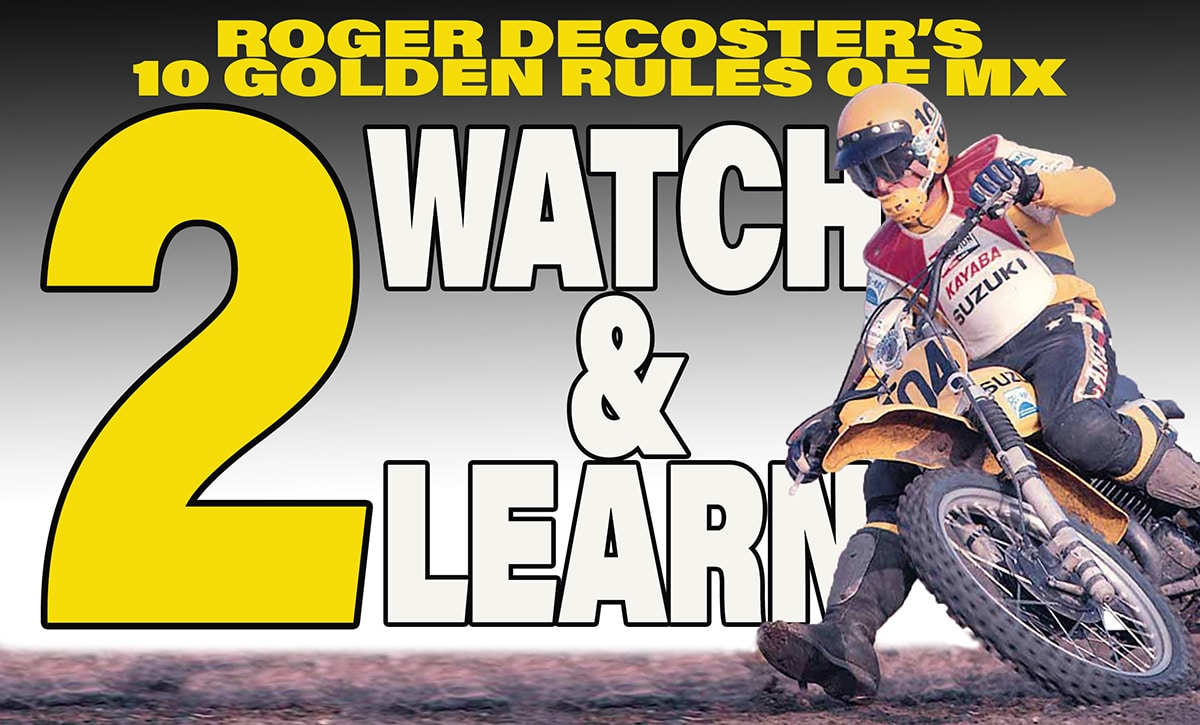 IF IT WORKS FOR HIM, IT CAN WORK FOR YOU

If you want to win, act like a winner. It sounds obvious, but even riders at the top levels can improve their technique by watching other riders and imitating certain aspects of their riding style. What do you think the 125 riders are doing when the 250 riders are on the track at a supercross? Watching. If you are taking a rest break after practice, you can just as easily watch the track, especially in areas you are having difficulty. Here are some things to watch:

Starts. Always watch the start of a race when you can. Which side of the gate did the holeshot come from? Do the riders on the inside get bottled up? Watch a rider who you know is a good starter. Where are his eyes focused when the gate drops? Is he watching the gate or the starter? Has he prepared his start area? Is one foot on the footpeg or are both on the ground when he starts? What gear is he in? Local guys usually have their start line dialed in, and if they are smart, they won’t tell you any of their secrets. If you are smart, you can figure them out for yourself.

Jumps. This is one area where it’s vital to watch before you do it yourself. If you see someone who is clearing a double easily, watch everything about him. Figure out what gear he’s in. Is he slipping the clutch to pull a taller gear? What line is he taking on the face of the jump? Are his feet on the pegs while he’s in the air, or has he unloaded them on take-off?

Whoops. Jean-Michel Bayle was one of the best ever in stadium whoops. Other riders watched him; some learned, some didn’t. Watching what line a rider takes is certainly important, but it’s also vital to watch how he’s attacking the section as a whole. Sometimes riders lift their front wheel before they hit the first whoop to stay low. Other times they use that first whoop as a jump to clear as many of the whoops that follow as possible. Is it the type of section where you clear the whoops two or three at a time, or where it’s best to hit the top of everyone to continue your drive? Body positioning, throttle and clutch control all come into play.

Sometimes it’s even helpful to watch riders who aren’t so good-it might help you identify problems with yourself.

Strategy. Some riders have a battle plan, some just ride. If someone beats you, and you feel like you are the faster rider, then learn from him. How did he do it? Did he have a good line that he only used on the last lap? Was he saving his strength?

Maybe he blocked you for the entire race. If he did, then it’s your fault. You were predictable. If someone else managed to pass him, why couldn’t you? Whatever he did, it enabled him to win this time. Figure it out and don’t let it happen again.

DECOSTER: KNOW WHAT YOU WANT