Catching up with with the top man in the desert

Dalton Shirey might be one of the most versatile racers on the West Coast. But the 23-year-old off-road racer hasn’t always had it easy. Shirey grew up racing local motocross as a daily-oriented weekend sport. As Dalton grew older, so did his passion for racing motorcycles. As a young teenager, he locked in amateur 125 championships and his results eventually caught the eye of ZipTy Racing’s Ty Davis. Ty presented Dalton with his first support ride, and with the help of Husqvarna, the two became a formidable team. Dalton went on to win the National Hare and Hound Pro 250 Championships and WORCS Pro 2 Championship. He also wrapped up regional number one plates at the AMA Big 6 Grand Prix Series. By 19, Dalton had already stacked up a resume that most wished they could have and he was offered a full-time Husqvarna Factory ride. Unfortunately, that would have a wait as an ACL injury hindered his debut and he wouldn’t see his first start for almost a year. With a contract that only gave him two years to perform and one of those years washed to injury, Shirey was desperate to provide Husqvarna with a professional championship. Unfortunately, it wasn’t to be and Dalton’s factory-level became a support ride the next year.
Shirey picked up the pieces and returned to ZipTy Racing with additional support from a new team: 3 Bros/Hatch Racing/SRT. It was almost the sense of relief that he needed to go racing. His 2020 season saw him battle wire to wire with David Kamo in the points standings, where Dalton would finally clinch that elusive National Championship. He not only won the National Hare and Hound Championship, but he had a stand-out performance at the Mint 400, which saw him win the same race where his father, Rick, completed years ago. As the years have passed, Shirey has become a winning contender no matter what style of race series he’s entered. Now becoming a two-time National Hare and Hound Champion, Dalton looks to continue winning into the 2023 race season and increase his championship run. 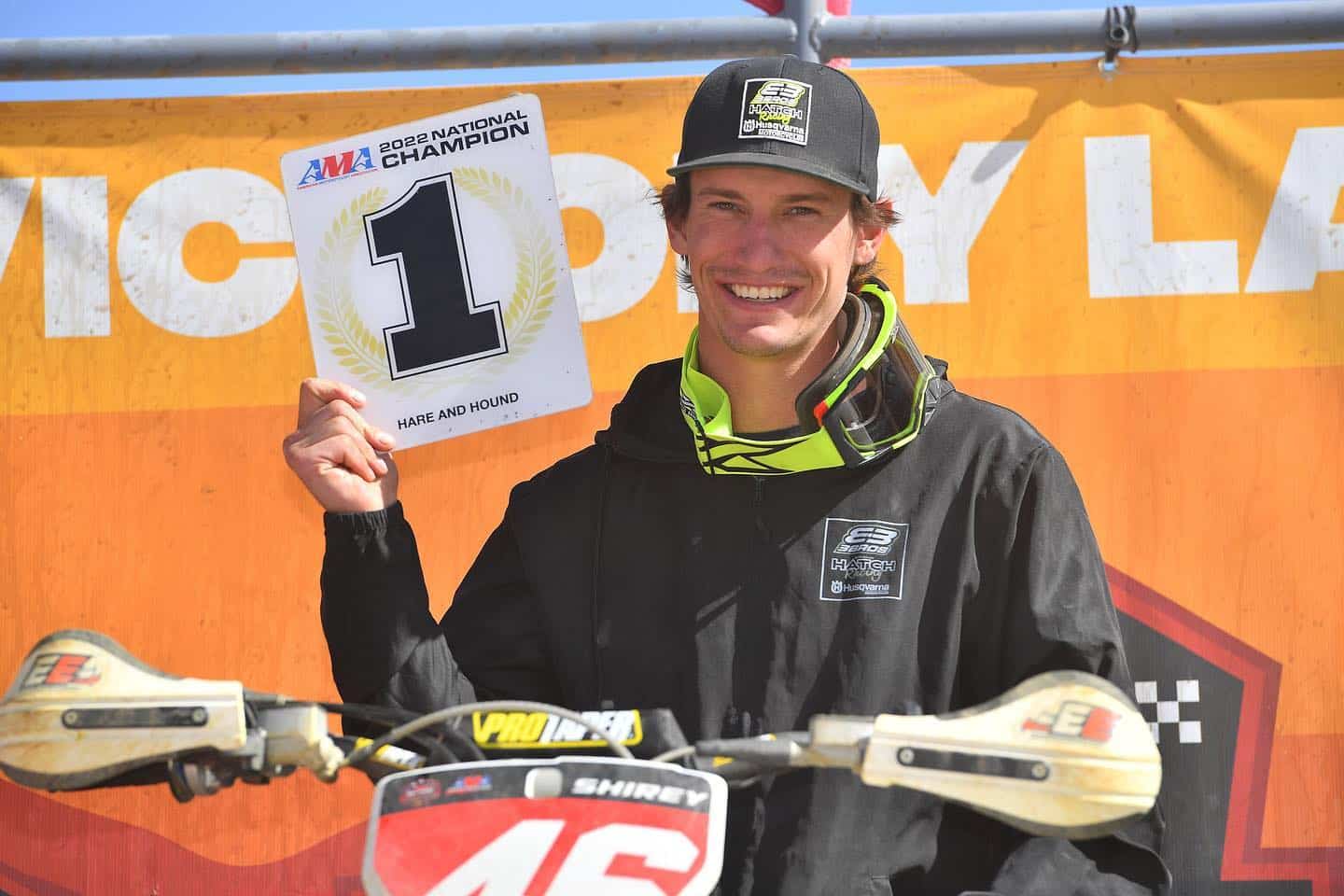 DIRT BIKE: Dalton, you’re a two-time National Champion now; tell us how you got to where you are. Weren’t you a grassroots racer in the Youth Hare and Hound Series?

Dalton: I grew up racing in motocross; in District 37, you aren’t allowed to run the “desert series” in the mini class until you’re the age of twelve. So my dad took me to the motocross races first. Once I was twelve, it was game on; I was racing District 37, Big 6, National Hare and Hounds, and WORCS. We ran all the series until I was seventeen. My dad told me that once I turned eighteen, I needed to find a sponsor to support me if I wanted to continue my path of racing. When I turned eighteen, I played football for my high school. We were at a game, and my brother came up and informed me that I got a ride! I dropped my helmet excitedly and never turned back to the field. My career took off from there, with Ty Davis taking me under his wing.

DIRT BIKE: Wow! We also had no idea you played football. To take it back a bit, weren’t you the Supermini champion at one point in the Hare and Hounds?

Dalton: So, everybody thinks that, but no, I wasn’t the champion. I won a few races in the series, but I was transitioning from Supermini to the 125 class, and the series had just started making headway. I won almost every race I entered except the last round because I was helping Jarrett Megla with his championship bid.

DIRT BIKE: Fast forward, you signed with Factory Husqvarna after a great year with Ty Davis. Take us through your short stint at the factory level.

Dalton: When Timmy Weigant (Husqvarna Off-road Team Manager) approached me, he initially gave me a deal to stay with Ty Davis. So, it would be almost the same program but with factory backing, parts, etc. But then I got hurt; I blew my knee out just two weeks after I signed my contract. I dealt with injury all year long, and during the middle of the year, Timmy told me I would be under the factory tent when I returned. So I was Rockstar Husqvarna, but I was dealing with personal problems and needed to grow up. Timmy is a straight guy, and I wasn’t performing, so he let me go from the factory team, but I still had support on a smaller scale with Three Brothers Racing.

DIRT BIKE: Is the goal to get back to the factory effort?

Dalton: Yes, I need to keep cleaning up myself. I can be on that effort again and would like to be there. 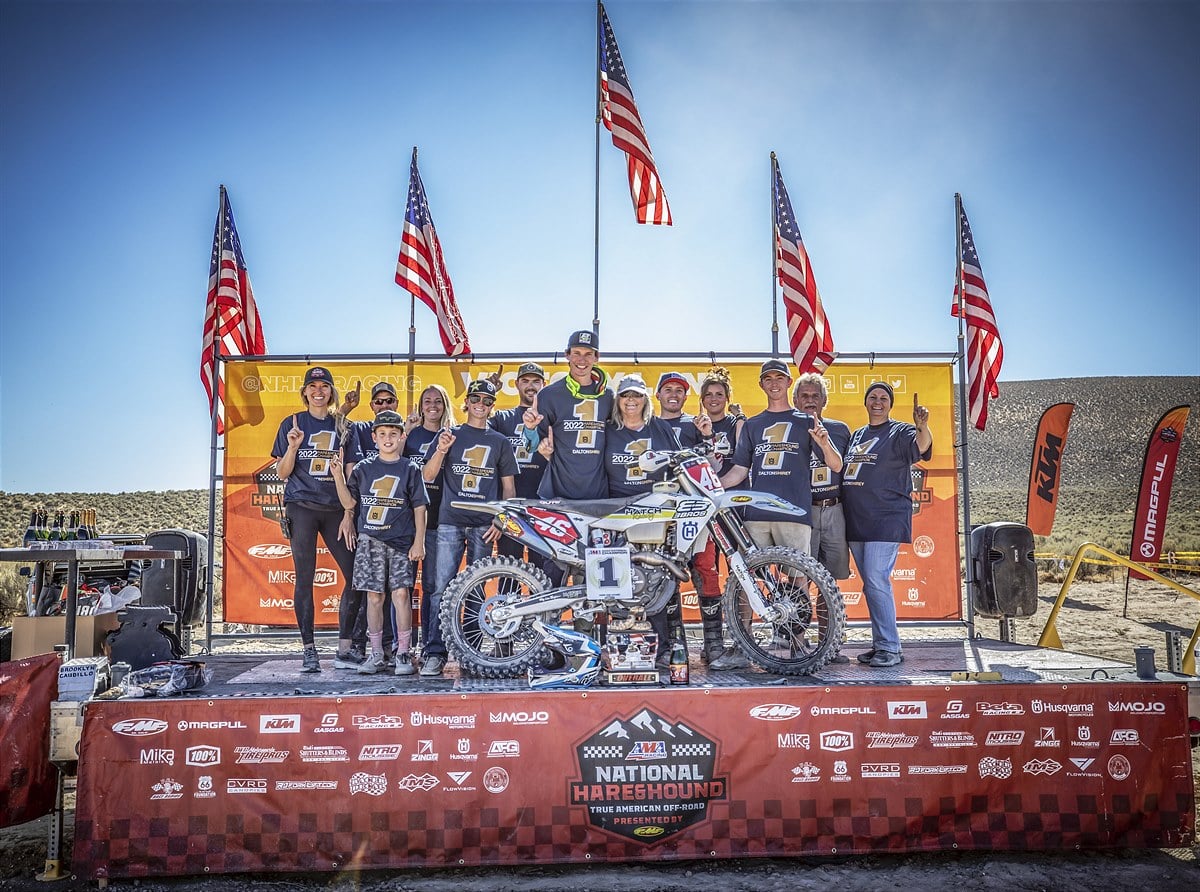 DIRT BIKE: A few weeks ago, we went to the GNCC for the Ironman. We were in disbelief at the effort that Husqvarna has there. They have three guys under their tent, and to be honest, the team is loaded with talent, but they didn’t win a National Championship and you did. Does that motivate you to show Husqvarna that you deserve factory support?

Dalton: Honestly, I’m not sure what else I can do. All I can do is try my best, go out there and do what I can. I can’t control what their best interests are for racing out here. Do I believe I deserve a spot? Sure, but I’m happy with what they’ve given and supported me, and there is nothing to complain about.

DIRT BIKE: That’s a very mature answer. We are pretty blunt, and we’ll be honest; you deserved that spot some time ago. This year you had to race Taylor Robert before he was injured. How do you prepare to race Taylor?

Dalton: Well, I didn’t start the year racing him with my best effort. We were way off when I showed up to the first round without testing my desert suspension. So right from the start, I felt like I had my work cut out. Once Ty and I went testing, I found the setting I was looking for and turned into an active trail rider to increase my skills on the bike because I knew I could cover Taylor in the fast valleys and sand washes. But he had me covered in technical riding, and I needed to learn how to match him. He had me three rounds in a row, but I finished only 5 to 10 seconds off of him until he crashed out of the series.

DIRT BIKE: It has to be a great feeling knowing that you can match his pace.

Dalton: Absolutely, it makes me happy knowing that when we go racing at a National Hare and Hound, and he shows up, I can be in contention to beat him. It’s just crazy that we were so close to each other at the end of these races after 100+ miles of racing.

DIRT BIKE: Tell us about your plans for 2023. Are you going to retain the National Hare and Hound Championship?

Dalton: My goal is to continue my bid for another championship. My idol Kurt Caselli got three titles, which is what I want to do. You’ll see me at all NGPC races, and I will do roughly five BITD races. I also would like the opportunity to be at a rally or two. Everybody seems to be trying those out, and they seem fun and something different to try.

DIRT BIKE: Who would you like to thank for helping get to where you are?

Dalton: My dad for all the help he’s given me throughout the years of racing. Brenda and my brother have been there as well with me; they’ve gone to Hare and Hounds to pit me when I didn’t have anybody there for me. Anthony [DiBasilio] and Dave [Feeny] from in-house Husqvarna for always getting me a prepped motorcycle. 3Bros/Hatch Racing have helped me a ton in getting me whatever I need to go racing and has supported my efforts over the last three years. Timmy [Weigant] stuck behind my efforts when times were tough, and I’ll always respect that. Ty Davis has been by my side since I turned sixteen and has helped develop me into the racer I am today. 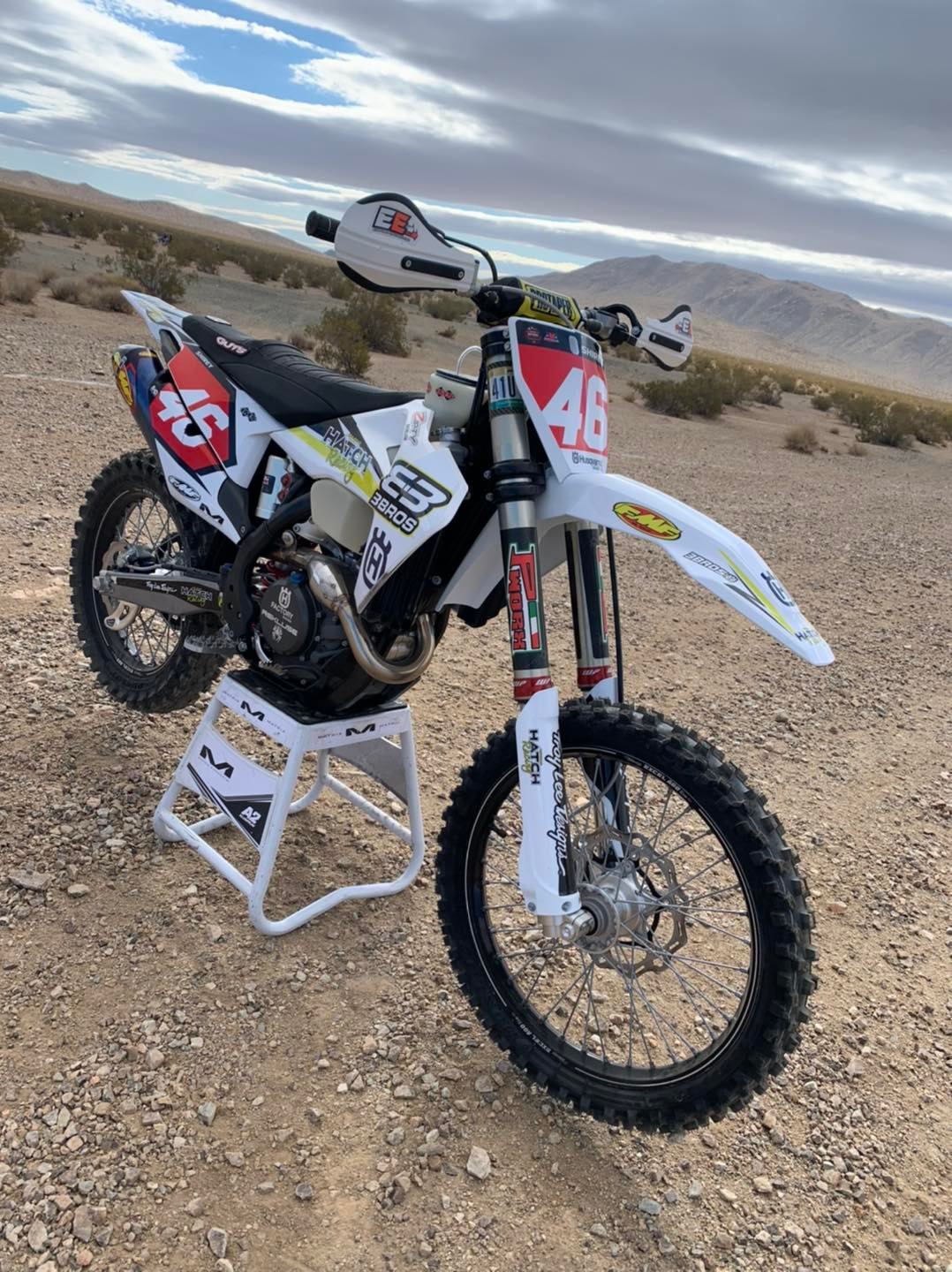 ULTIMATE HONDA CRF110: BEHIND THE BUILD