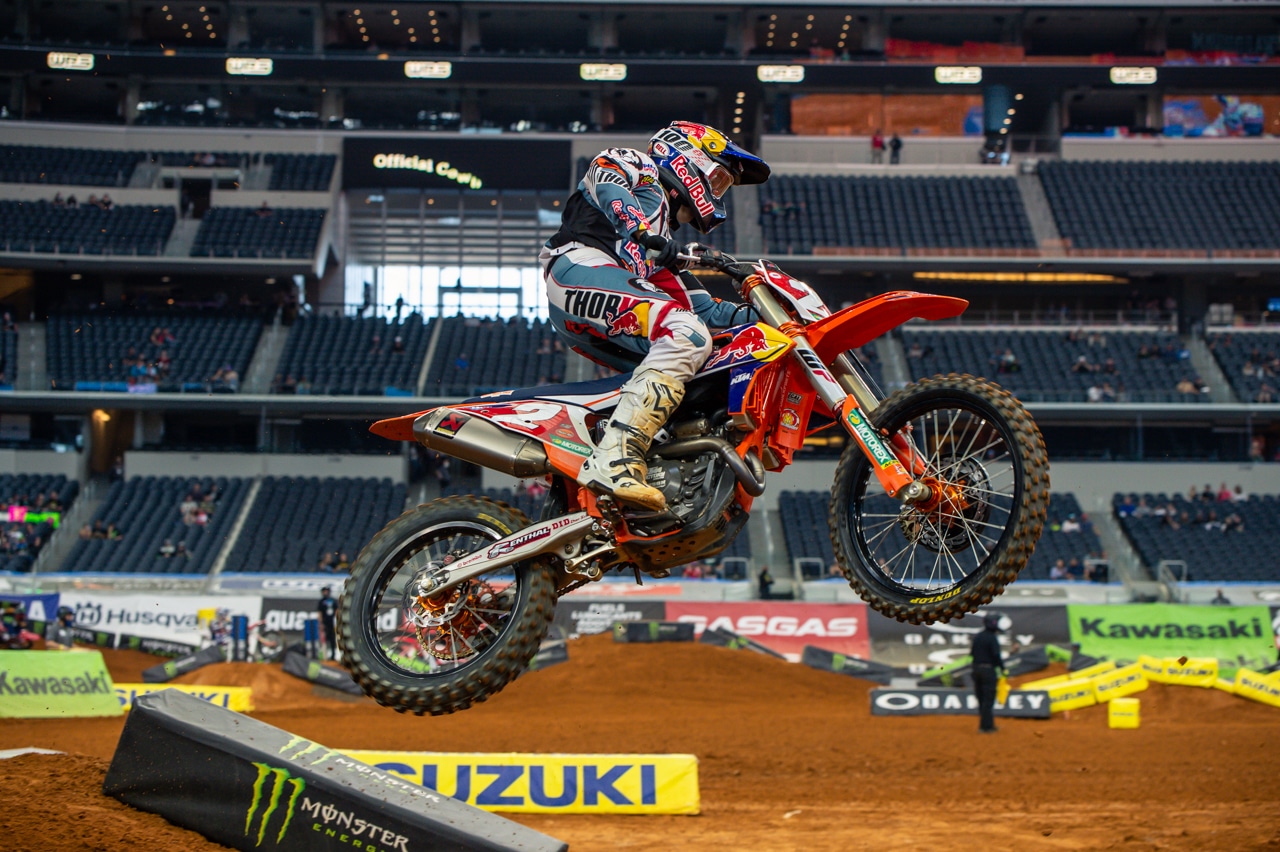 The third Supercross in eight days took place in ATT Stadium in Arlington Texas this weekend, and all the key players picked up right where they left off on Tuesday. The question of the night: “can Cooper Webb be stopped?” It didn’t start well for him. He led his heat, only to be passed by Ken Roczen, then laid out by Chase Sexton. In the main, it was the other way around, with Webb being the  hunter and Rozen the hunted. In the end, Webb took his third consecutive win and swept Arlington. In the 250 class, it finally went according to plan to Justin Cooper who led from flag to flag and regained the point lead.   For extended coverage of 2021 Supercross, click here. 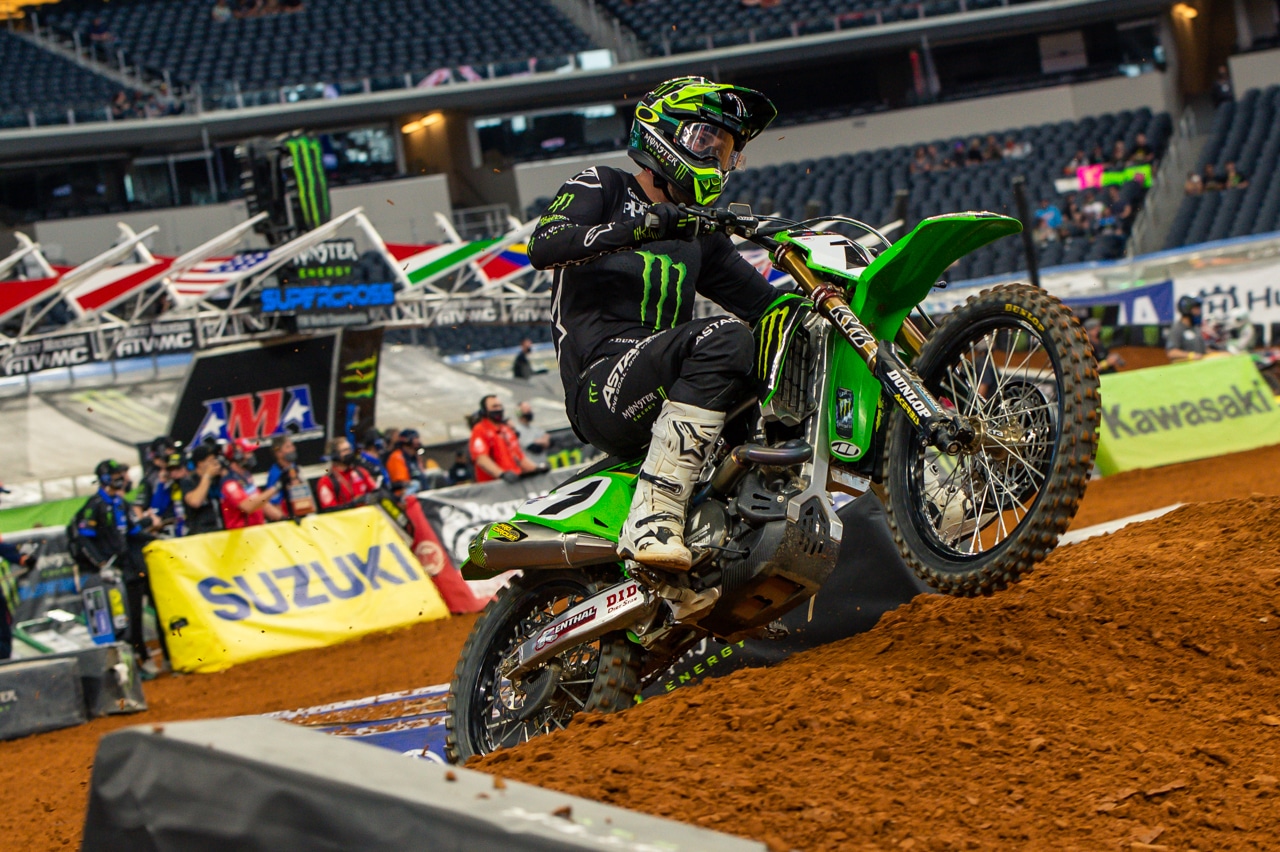 It was Justin Barcia up front early with Malcolm Stewart hot on his heels. Eli Tomac was third, but it didn’t take him long to pass Stewart and then start stalking Barcia. He made the pass just after the halfway mark, but then had a difficult lap or two. Eventually Tomac developed a safe gap over Barcia, Stewart and Aaron Plessinger. 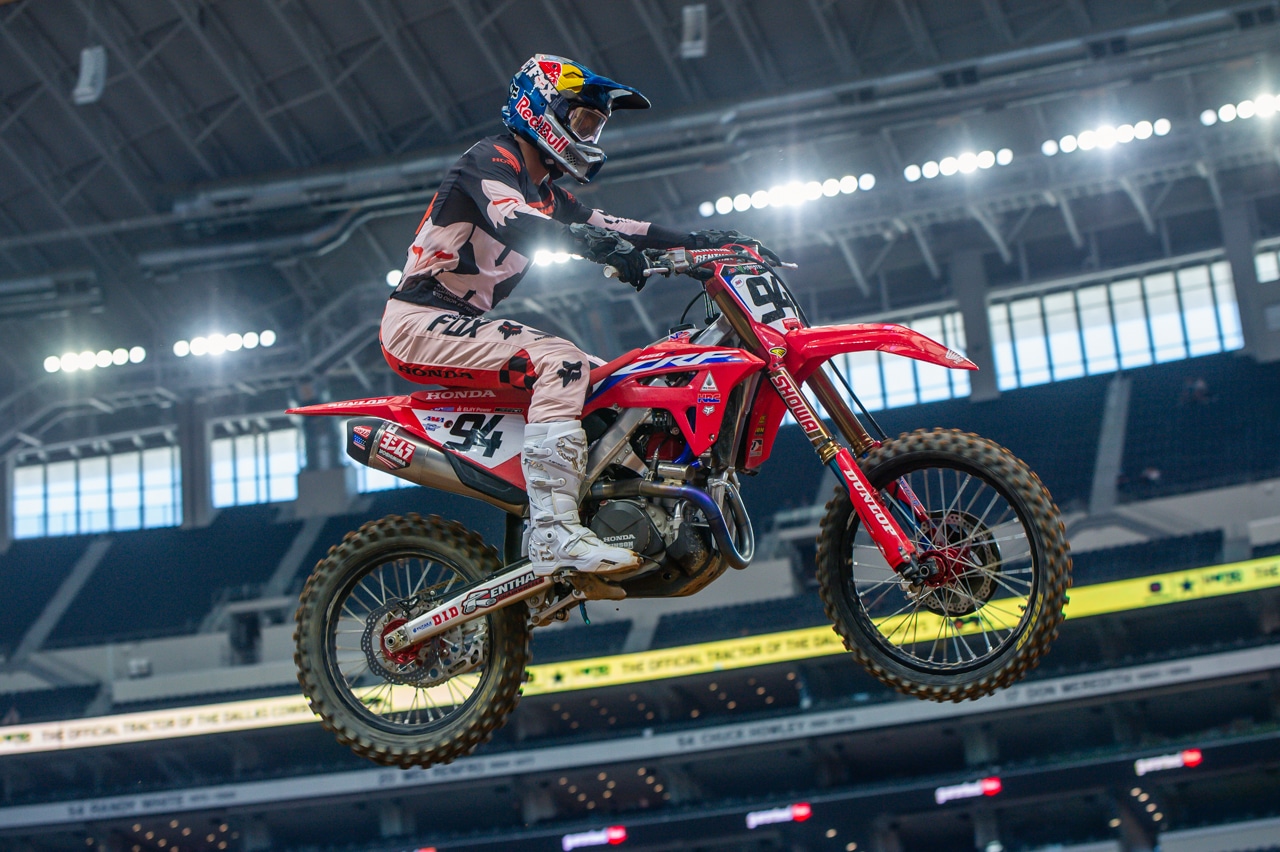 Cooper Webb got another good start for heat two, but he had a pack of Hondas right behind him. Both Ken Roczen and Chase Sexton were highly motivated to keep Webb under control. On the third lap Roczen saw an opportunity and took it, taking over the lead. He started pulling away slightly and then it was Sexton’s turn. He dogged Webb for most of the race, eventually making the pass and making contact. Webb went down, dropping back to fifth place. 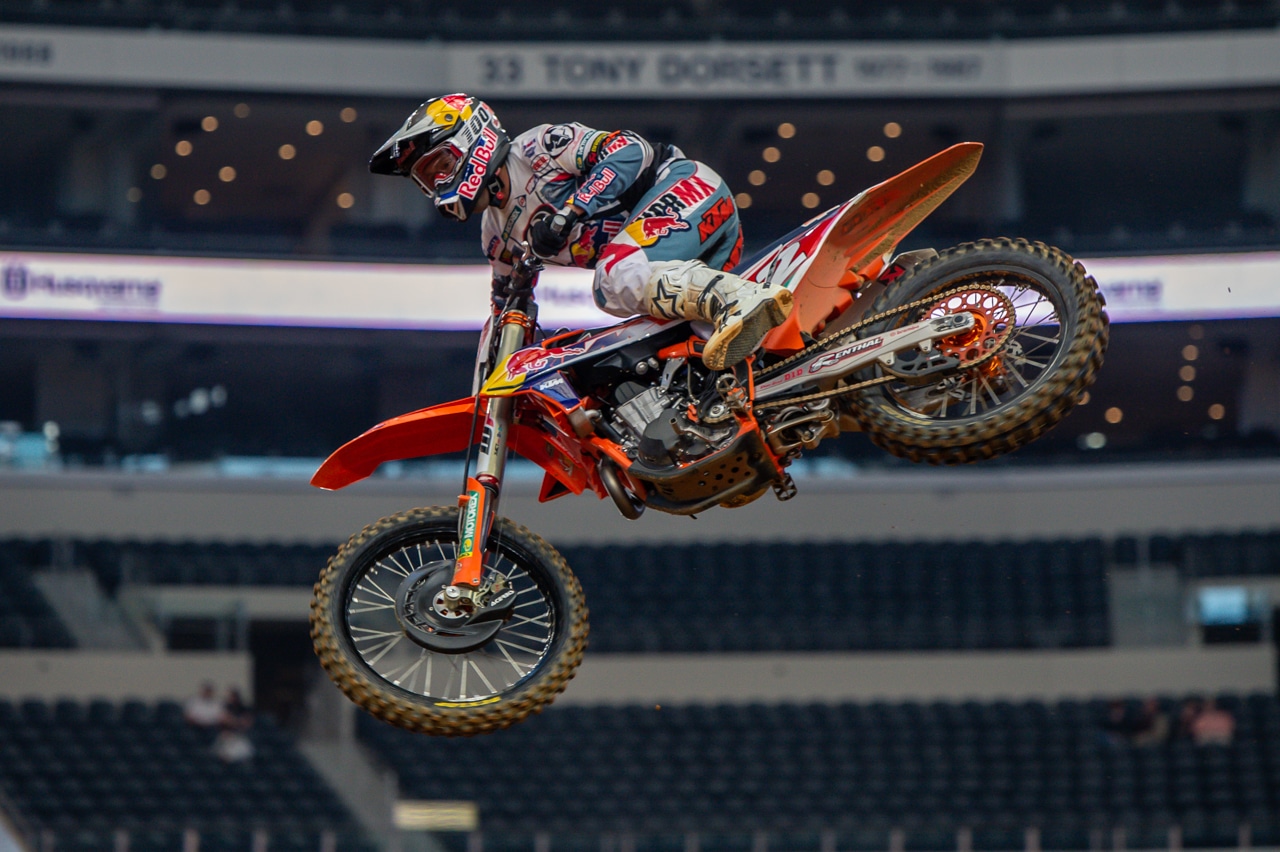 You couldn’t have asked for a better start to the main. Justin Barcia, Cooper Webb, Ken Roczen and Eli Tomac were all up front. Very quickly, Roczen got the lead and Webb was second. Tomac was pushing Barcia in the early laps and eventually took third away. For a period, Tomac looked like he would go straight to the front, but he couldn’t crack the code to pass Webb. Many of the other top riders were having trouble; Sexton crashed in the tricky sand section and Marvin Musquin also went down. Both dropped out. Jason Anderson found his way into fifth, but couldn’t quite match the pace of the big four up front.  Roczen, Webb, Tomac and Barcia seemed to be locked in a stalemate for lap after lap, then things started getting silly. Tomac hit a Tuffbloc and Barcia passed him, and then Webb upped the pressure on Roczen. Webb finally passed for the lead, but it wasn’t pretty. Roczen came back again and again before giving in. About the same time, Tomac repassed  Barcia, then seemed to make ground on Roczen. In the final two laps, it continued to be a nail biter, but Webb held on for the win. 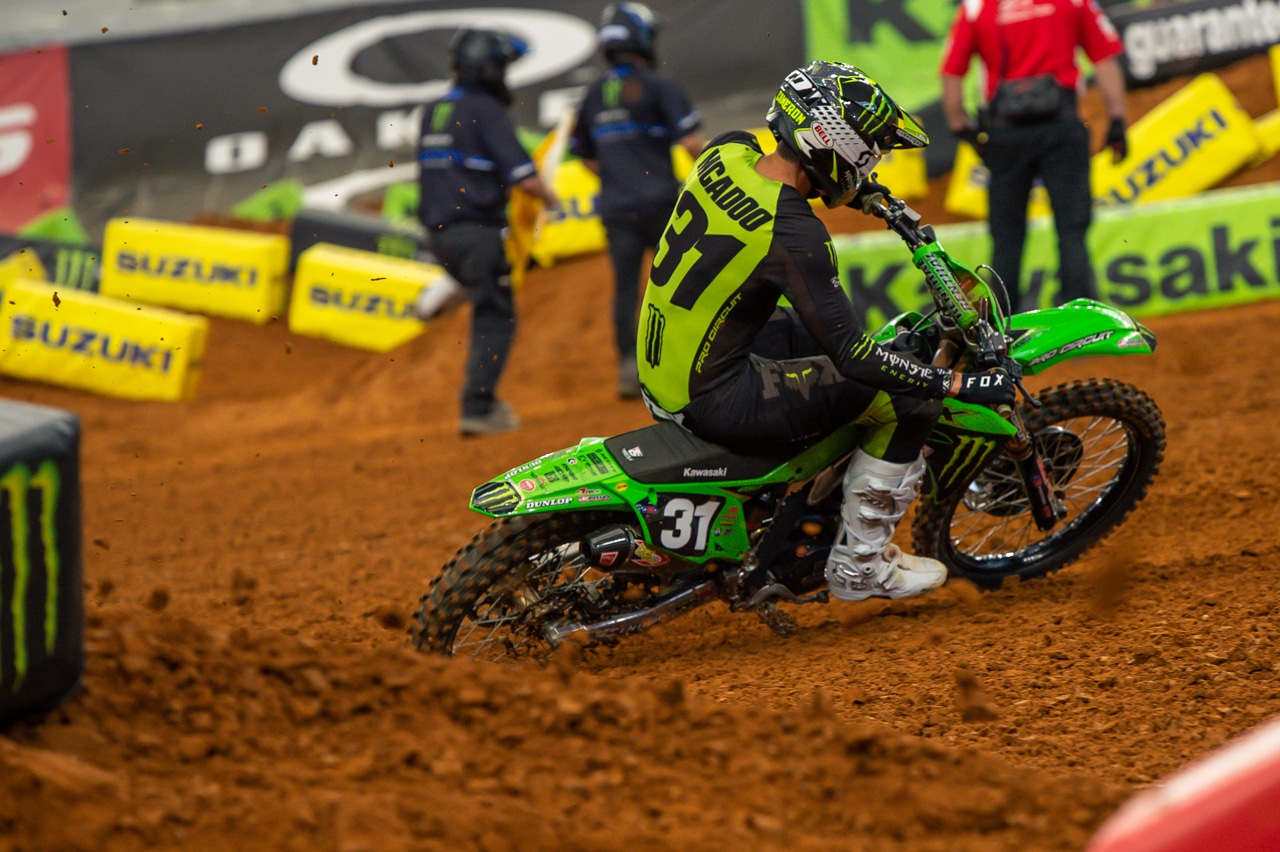 Jarrett Frye got the start, but Cameron McAdoo took over before long and quickly started to open a gap. Several of the top riders were invovled in a pile up, including Garrett Marchbanks Mitchell Harrison and Jordon Smith. They would have to wait for the LCQ, while McAdoo took an easy win. 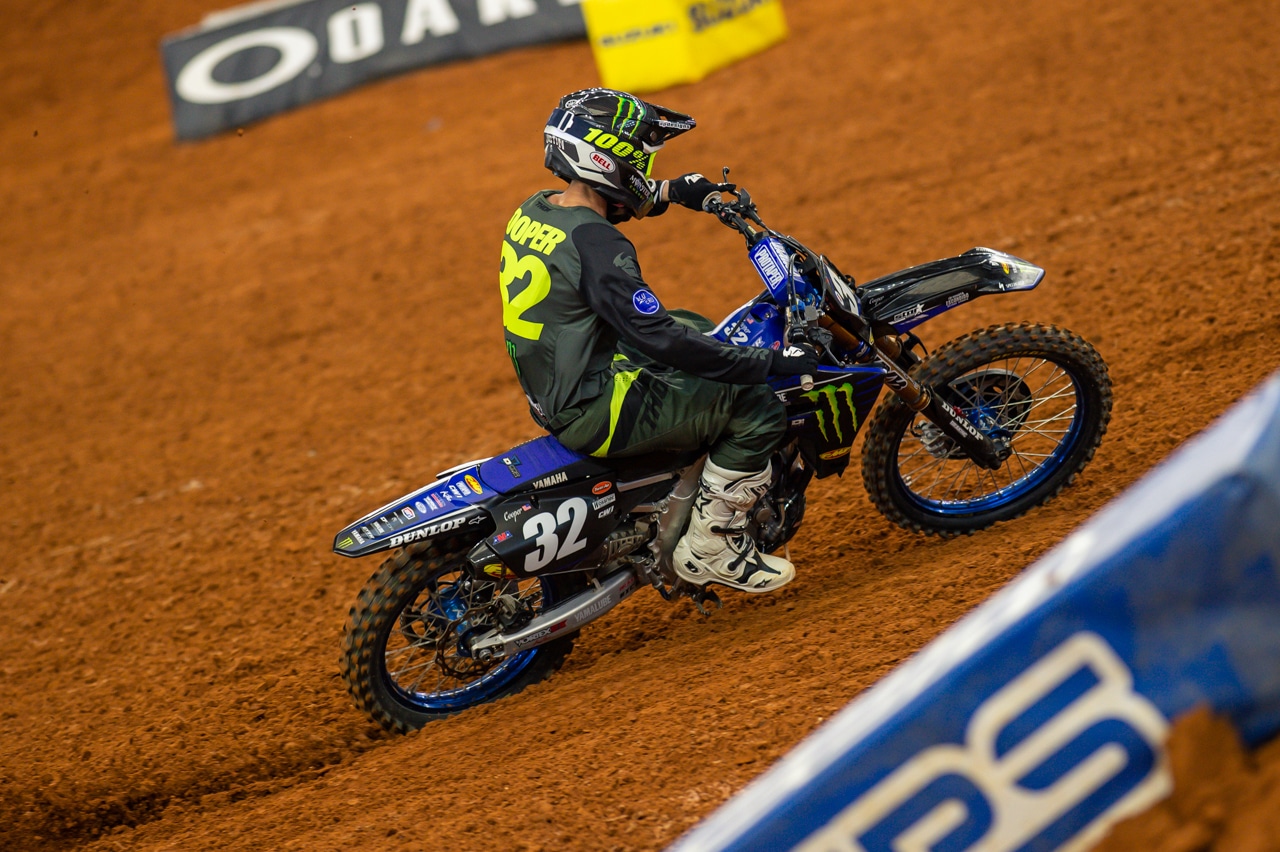 Justin Cooper led the second heat from start to finish, with Jalek Swoll holding second lace in the early laps. Hunter Lawrence eventually displaced him with Seth Hammaker coming up  to grab fourth. Robbie Wageman held on to the final qualifying spot.

In the main, Justin Cooper could not have asked for a more perfect race. He got the holeshot, led every lap and eventually took the win and the points lead. Cameron McAdoo got into second on the first lap and kept Cooper from getting away, but could do nothing to close the gap. Coty Schock was up front early in the race, but went down, leaving Hunter Lawrence and Garrett Marchbanks in third and fourth.  As the race went on, the most amazing survival story went to Lawrence. He overshot a jump then careened off the track and got tangled in a safety net. He remounted and somehow only lost two places. In the final laps, McAdoo seemed to surrender slightly, letting Cooper open up a 6-second lead.