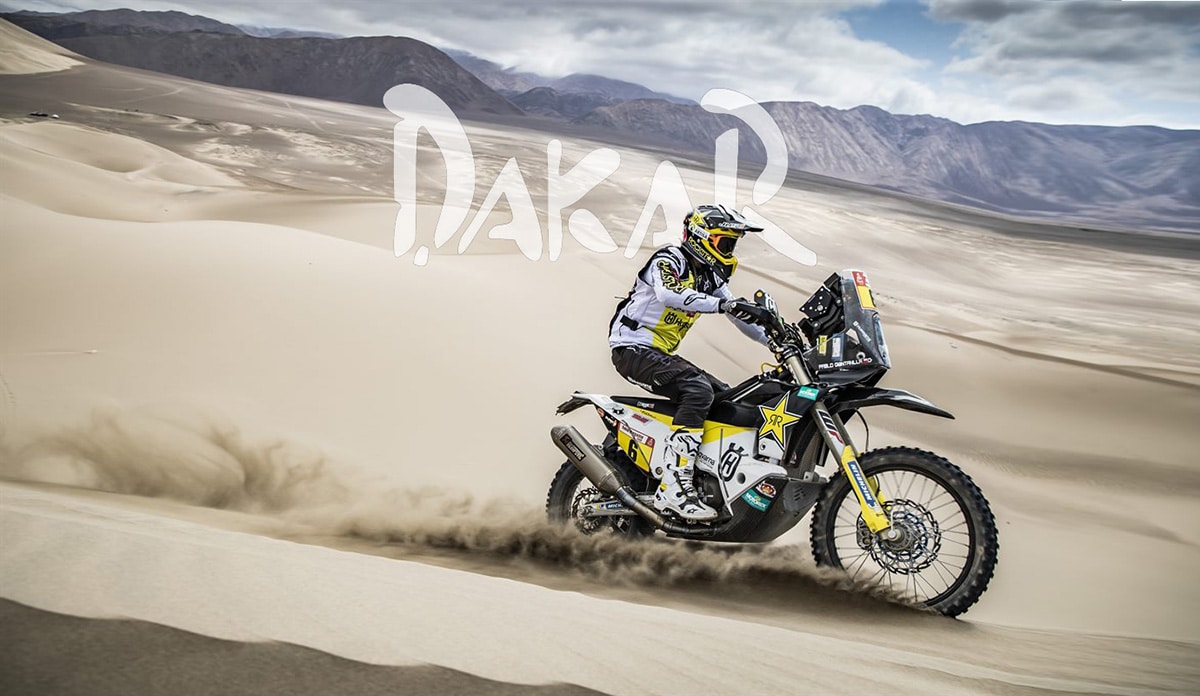 Stage six was a hard, long day of difficult navigation in the vast dunes of Tanaka. When it was all over, Pablo Quintanilla had taken the stage victory as well as the overall lead in the rally, pulling ahead of previous leader Ricky Brabec by a good four minutes. As far as other Americans, there was good news and bad news. The good news was that Andrew Short had another solid ride, finishing eighth on the stage and maintaining 10th overall. The bad news was that rookie Skyler Howes, who was having a spectacular first Dakar, crashed hard and was transported out by helicopter. His rally is over. His teammate Garrett Poucher is still running. He was 47th today and is in 46th overall. Nathan Rafferty is in 53rd overall.

The riders were forced to ride a 177 km liaison section on their day off yesterday to start the first special this morning. KTM’s Sam Sunderland, who won the previous stage, was the rider opening the route, which is always a disadvantage in the dunes. It wasn’t long before he lost time to most of main rivals. Quintanilla and Honda rider Kevin Benevidez were catching him though the day. Brabec had minor navigation issues, but still holds excellent position for the remainder of the rally.

Ricky Brabec: “It was another tough stage. The temperature was nice but the wind was a big factor. It’s kind of hard to ride all day with the wind pushing you around. At one point for about 50 km I was concerned about fuel. I know that we had filled up at the top at kilometre 80 at the neutralization. I was freaking out because I ran out of one of my tanks earlier than expected. On the whole it was a good day. There’s four days left. I’m glad to be at this bivouac full of fesh fesh that makes everything such a mess. I’m looking forward to the next four days. Hopefully I can stay in the fight and keep pushing. I feel great and my body is at 100%.”

Pablo Quintanilla: “Everything went according to plan today and I’m happy with the stage win. The day wasn’t easy, the pace was quite fast, and navigation was difficult. We also had to race through strong headwinds. We had a good battle with Kevin Benavides and at one point I managed to pass him and retain the lead. It’s good to be back on top in the overall. The race is still long and I want to stick to my plan. Tomorrow I will be the first rider to start the stage and this is surely a disadvantage. But my plan is to fight back for a good result on day eighth and then take advantage of the mass start on day nine. Lots of things can happen these next few days but I will do my best to keep my eyes focused on my goals.”

Andrew Short: “It was a tricky day for me. The dunes are really soft and it’s hard to get a good rhythm. I saw a rider crash in front of me in the first part of the stage and that was a bit disappointing. It took me some time to find my pace. After the halfway point I caught up with a few other riders and we continued the rest of the stage racing alongside each other. It was a hard day for all of us with the wind and the terrain, everything was really tough. Despite all that, I’m still in a good position in the race and I have a few more stages to improve my position in the overall standings.”