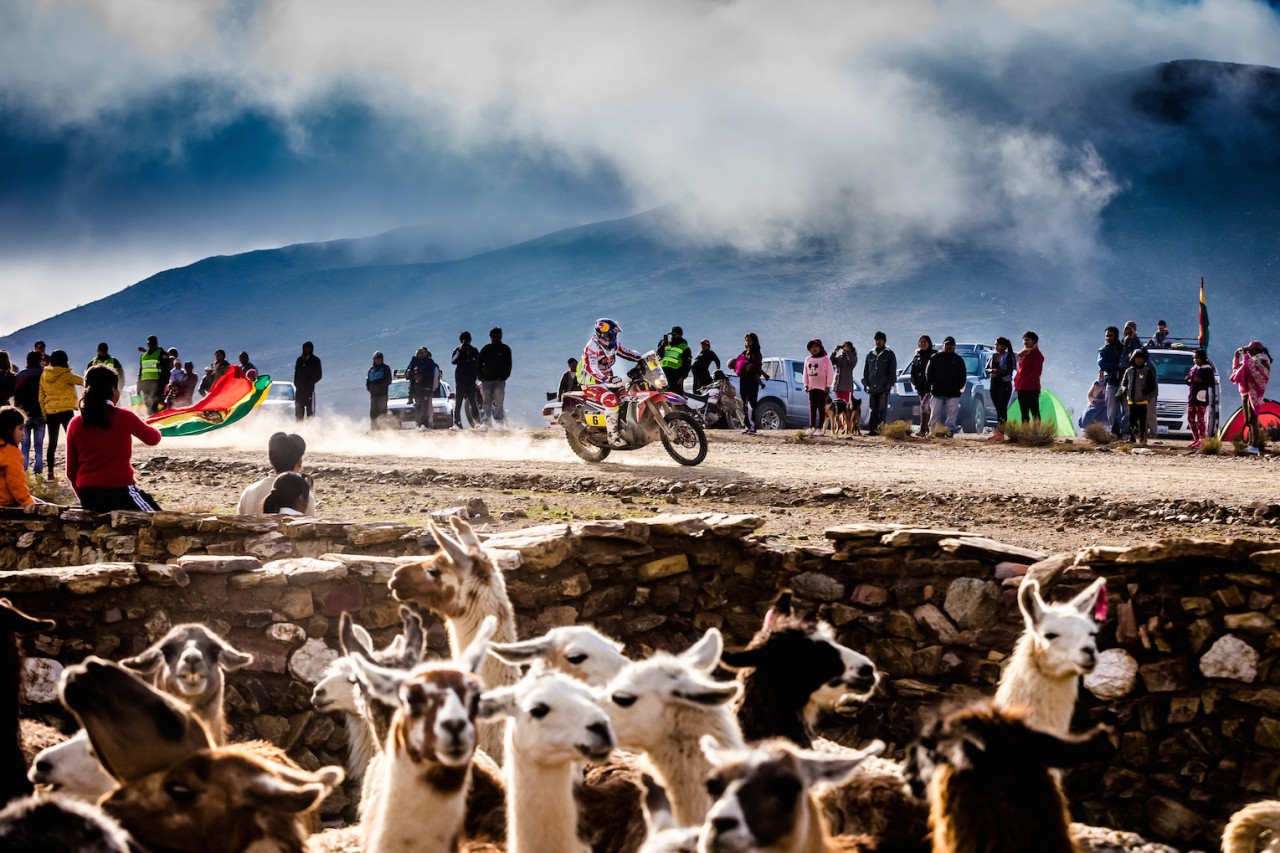 Red Bull KTM factory rider Toby Price was in form on Thursday to take his second Dakar Rally stage win in the current edition as this offroad epic crossed from Argentina into Bolivia. The Australian rider competed the stage, which was also characterized by a climb to 4600 meters altitude, in four hours three minutes and 44 seconds. He moved from seventh in the overall rankings up to third and is now just one minute 47 seconds behind Paulo Goncalves, who leads for the HRC Honda team.

It was a good day for KTM riders and Price was the first of four fastest to reach the finish at Uyuni to also safely wrap up the second half of the marathon stage. KTM factory teammate and Dakar Rookie Antoine Meo  was second in the stage and is looking increasingly comfortable after his switch from world-class enduro racing to rally raid.  Stefan Svitko of Slovakia was third on his KTM, and factory rider Matthias Walkner finished fourth.

Price was on the pace on Thursday, clocking the fastest time throughout the 328km timed special. Speaking about the two-day long marathon stage he commented: “They were long stages and I had to look after the bike and make sure we made no mistakes, and also look after the tires. Yesterday we were back a little bit but we still made some good times. Today was a stage win and we’re back in contention again and hopefully we can get a good day in tomorrow. Today was really fast tracks but the bike is holding up well. The special went from wide open to tight technical and I had to adjust to that. Now I have to maintain a good position each day.” Price also confirmed that he had no problems with the altitude, which has proved difficult for some riders.

Meo too was satisfied with his ride: “I’m quite happy with my riding style and yesterday I tried to stay careful, to look after the bike and not damage anything. I did have a little crash in the first half of the marathon stage yesterday and the tire was very slippery on the back. Today my front fork was leaking so I had no front brakes but I told myself it doesn’t matter. I rode quite well. I didn’t do anything crazy and I stayed on two wheels. It was a great day and I’m very happy.”

Goncalves remains the leader on his Honda: “It was a really difficult marathon. The altitude gave me a headache, but even so, I’m fairly happy with the way that it went, because the bike held up really well and I clocked up a good time. There is a great stage awaiting us tomorrow. Let’s see what happens, but right now I need some rest. Today, the first and last 100 km were demanding for the navigation, but I managed to make it through.”

Joan Barreda regrouped after being penalized yesterday for speeding in a control section “I think that in the end I had a good stage today. We were faced with a really tough physical stage, very hard for all. I think that it went well even though there was a problem with the navigation in the final stretch that didn’t match the roadbook. I hope they clear up these points. It didn’t go badly because we are still in the running to win the race.”

American Ricky Brabec had a rough day: “Today was the second of the two marathon days. Today was good and started out fast; the navigation got a bit tricky. I was very confident halfway through the stage and I was picking up the speed a bit. Eventually the rear tank was empty and the front tanks were still full so the weight distribution was hard to ride with and I came into a curve a little bit too hot. I just laid the bike over and slid out. When that happened I smashed the exhaust pipe so that robbed me of a lot of power. So with the crash and the fast roads and me only going at 135 km, I lost a bit of time but I’m still here safely and the bike is still running and there is a long way to go.”

Alex Smith continues a solid ride: “Done with stage 5. Today was a mix of everything. Some very fast (160kph) roads, rocky sand washes and some rough winding roads. I don’t like the fast roads, but the rough winding roads and rocky sand washes suit my riding style well and I can pass a lot of riders. I moved up 12 places today to 51st. I’ll just keep chipping away at this until we reach Rosario. Tomorrow is the longest special stage of the rally at 575km. I think I will do well with the long stage. Good night for now. Another update tomorrow night.”

Friday’s Stage 6 is a loop around Uyuni, but it is also the longest timed special of this year’s edition over a total distance of 723km, including 542 km under the clock. Altitude may also create problems as the ride is between 3,500 and 4,200 meters and organizers have promised a constant change of pace and terrain.

There are two more stages before the rest day on Sunday.