Stage nine started and finished at the coastal city of Neom, covering a total distance of 579km. It was a rough day for Red Bull KTM rider Toby Price, who started second on the stage following overall leader Jose Ignacio Cornejo. Two kilometers from checkpoint five, price went down hard. Ricky Brabec was the first rider there–he stopped to be of assistence until Price could be airlifted out. Sam Sunderland, price’s KTM teammate, also stopped and waited. According to ASO rules, both riders had their times adjsuted at the end to the day to compensate for the time they spent with Price. In the mean time, HRC Honda’s Kevin Benavides rode well to collect the win only to discover that his brother Luciano had also been airlifted out with a should injury. After the scores were adjusted, Brabec was second and Sunderland was fourth. Cornejo remains in first overall with a third n the day.  Skyler Howes continues to ride well despite a navigational error today. He remains in seventh overall.

Kevin Benavides: “We can say that today was a really hard special stage. Today, it is a year ago since the death of my friend Paulo Gonçalves. I aimed to do the best possible stage and this victory is dedicated to him. I’m happy with the job done, but I also have a mixed emotions as at the end of the stage I found out that my brother had fallen and got injured. I found out that he’s fine, so that has calmed me down, but it’s been a strange day nevertheless. There are three more days left and everything could change, so you have to be focused and give your all on a day-to-day basis.” 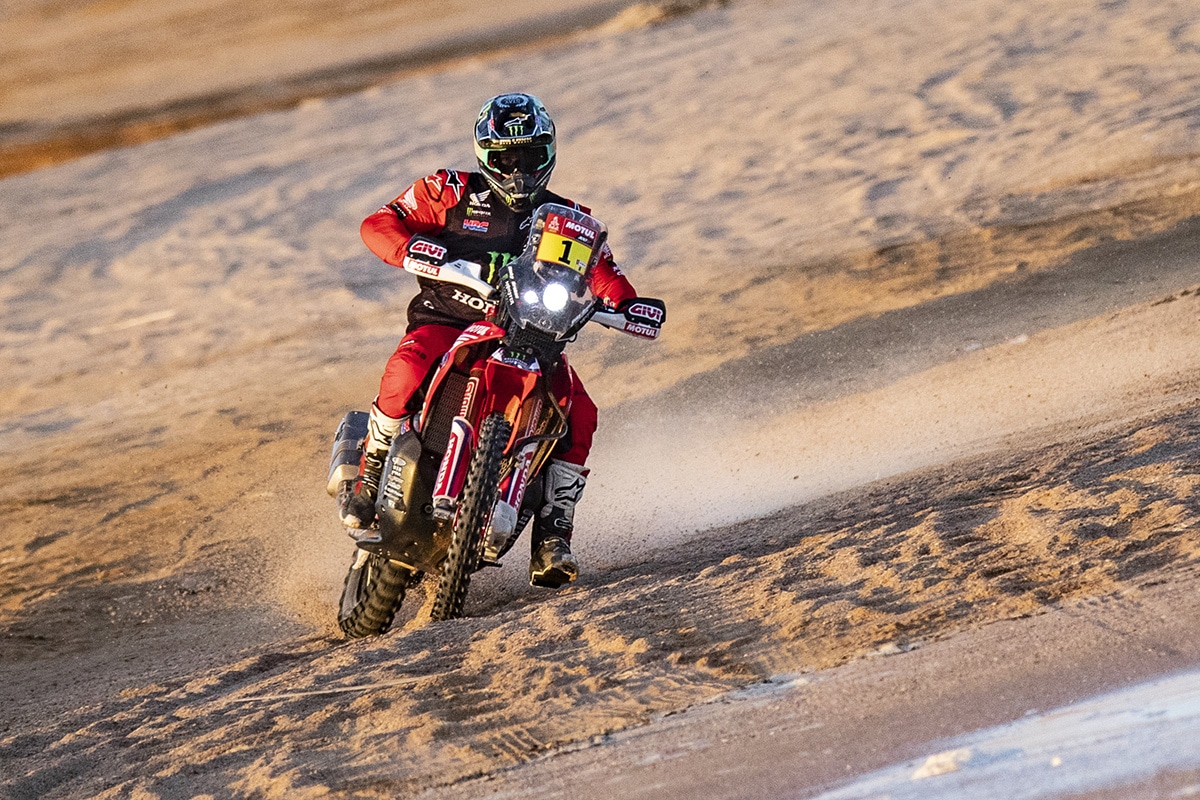 Ricky Brabec: “Today was definitely tough. We started third. We all had a long day today – there were 465 kilometers – that’s a long day for the navigation and it’s a long day in the desert. Unfortunately, Toby had gone down and I stopped for him for about 20 minutes. I was just waiting for the helicopter to get there. It’s a shame. He was definitely up there, fighting for the win. It happens. Every morning when we put our gear on, things like this can happen and we know it. It’s just the risk that we are willing to take. Unfortunately, the second week is going to be brutal. Last year we came here first, then we ended in the sand dunes. It was smooth. But this year we are starting in the dunes and finishing in the rocks and the rough, bumpy traces and river-beds. This week you don’t want to sleep too much. You want to stay focused. There’s three days left, but look what happened today with a few riders. Three days left and a lot can happen still. We are just going to try and stay focused and make it to the finish-line.”

Skyler Howes: “Trying not to be hard on myself, but I really messed up the navigation today. I reckon I spent 20 minutes going in wrong directions. BUT I am really happy with the riding today, I enjoyed the stage, it was high speed, lots of washes, tons of rocks, some sand, and the bike felt great. Just need to learn my lesson and follow the dang roadbook.”