Today the second half of the Marathon stage started from the Sakaka bivouac, where the riders stayed yesterday without any help from their mechanics. It featured 375 kilometers of timed special on mainly hard gravel and sandy tracks with the cold temperatures giving way to the heat and strong winds blowing at the Neom bivouac. It was a great day for the Honda pair of Jose Ignacio Cornejo and Ricky Brabec, who rode together for much of the stage after starting 1-2. By catching yesterday’s winner Brabec, Nacho was the winner of the day and continues to lead overall. The rider who had the most surprising result was Red Bull KTM’s Toby Price, who finished second despite rear tire damage. Price repaired the tire with duct tape and zip ties as wheel changes are not allowed in Marathon stages. He sits in second overall, just over a minute back. Skyler Howes had another solid day, although he felt he rode too conservatively to 9th. 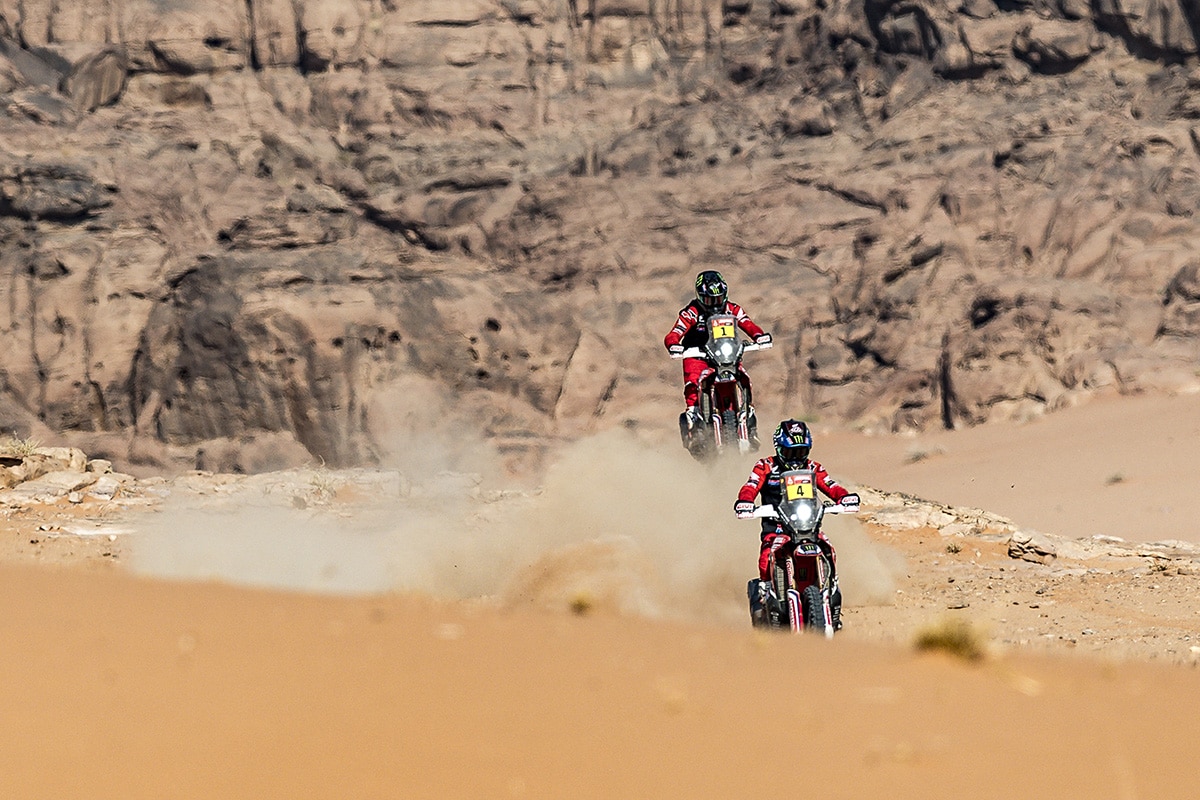 José Ignacio Cornejo: “Today I came second behind my partner and friend Ricky and it has tough to catch him up. He was opening very fast and I finally caught him and we opened the track at a very good pace. Congratulations to Ricky because he did very well. The idea was not to win, but it was very difficult to keep the other riders in check behind as they were very far from us. Now, I’ve got a bit of an advantage over the second-placed rider overall but the times are still very tight, so we have to continue with the same concentration. We will try to finish the job well, tomorrow we will try to open as cleanly as we can, and drop as little time as possible.” 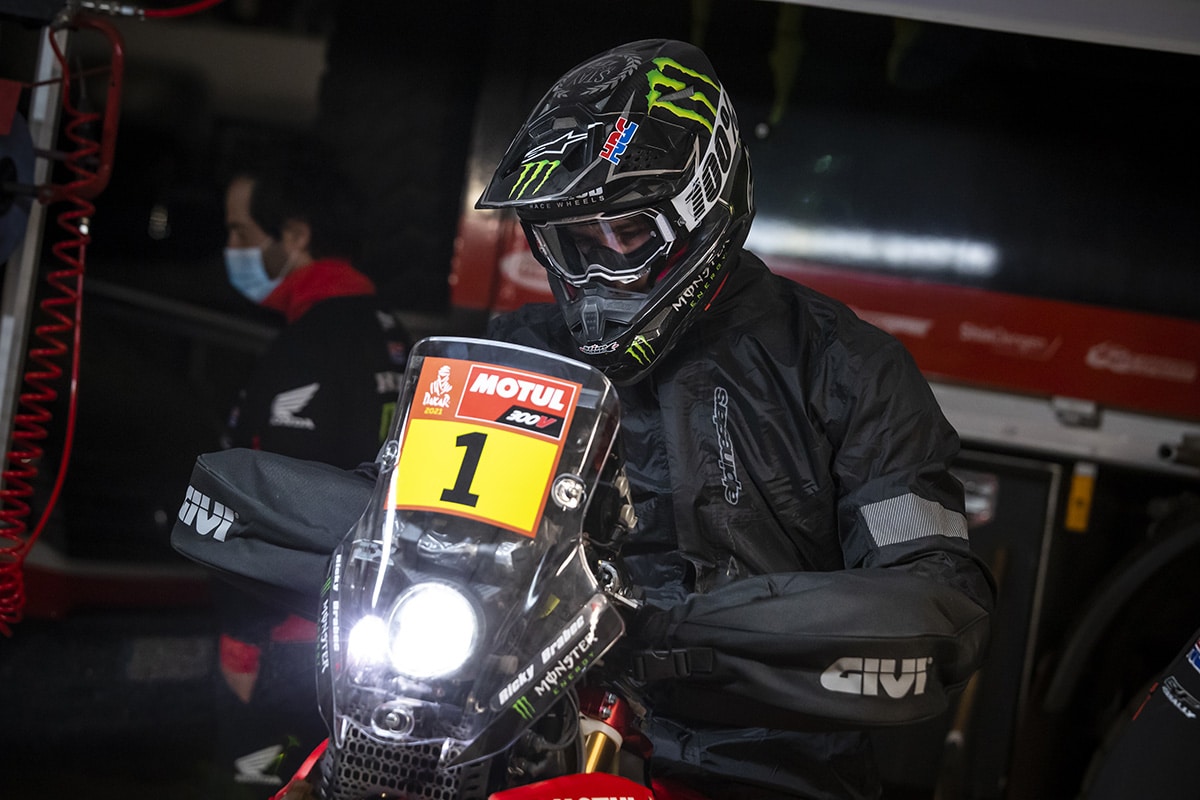 Ricky Brabec: “Today was the second part of the marathon. We did good today. We did good yesterday. We opened the whole stage. Nacho caught me around refuelling at kilometre 229. The second part of the special was 115 km. Nacho and I rode together and just worked it out with good team work. We went really fast. Yesterday we did well, but I was scared that we would have to open. We rode well today. I’m kicking myself in the head. I wish we’d had the speed and the focus last week. We are fighting and we are stronger now. There’s four days left. It’s the same part of the desert that helped me last year. Hopefully somewhere we can pull out time. There’s four days and a lot of things will change. Everyone has used tyres. Tyre cuts are going to be a factor. Bike fatigue. Rider fatigue. Everything is going to start playing in. The finish is really close. It’s not that close in kilometres. There’s four days left. Let’s try and keep the focus and push. 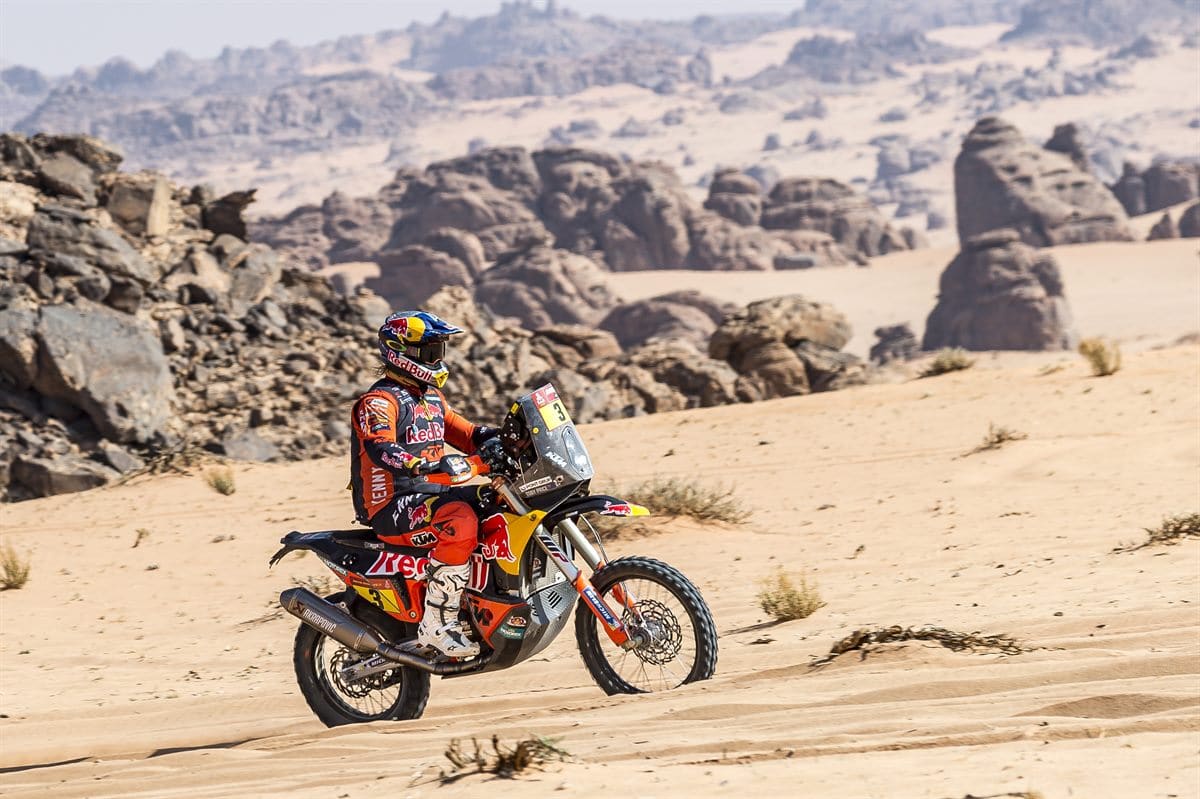 Toby Price: “It’s been a really tough couple of days for me. I damaged my tire yesterday and of course, not being allowed to change it, I had to repair it as best I could for today and hope it held up. I rode a good stage, but all the while I was trying to be as smooth as possible – not accelerate too hard in case the issue got worse. Second on the day is not bad at all, I lost a little more time to the rally leader, but I’m just glad I got to the finish line.”

Skyler Howes: “We’re up in the north part of Saudi and I’m happy! Love the scenery up here. Today’s stage I started 3rd, and from the briefing it sounded like we were going to have some tricky navigation. I chose to ride a moderate pace and nail the navigation and wait for a mistake from the 2 in front of me. Well… I was wrong.. I just went too slow and they nailed it. Mad props to Nacho and Ricky for leading out today and crushing it. After Sam caught me I realized I just wasn’t going fast enough and latched on to the back of him for the rest of the stage, it was actually super fun, but by the end I had lost about 7 minutes to the lead. Happy to have made it through the marathon stages clean. The pace is incredibly high this Dakar (I’m sure you’ve heard that a lot) and I don’t think these dudes have any plan to back it down.