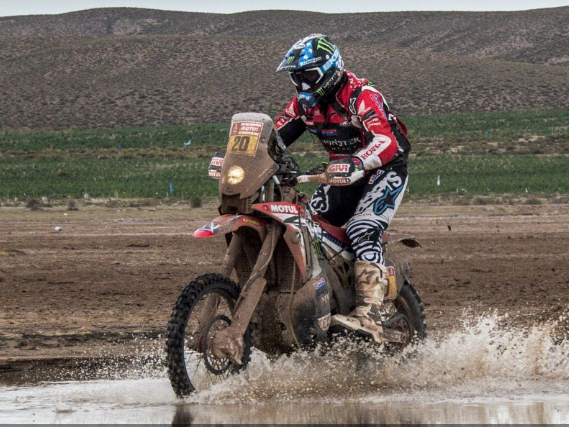 The stage finished after some 498 kilometres of special and 87 km of liaison section as the second half of the marathon stage came to its conclusion. Red Bull KTM’s Antoine Meo was the stage winner, moving him up to sixth in the standings. Overall, it’s still Yamaha’s Adrien Van Beveren on top, even though he was 8th today.

Only one minute behind the stage winner was American Ricky Brabec who finished second on the day. The Californian appeared at ease in terrain very similar to what he’s used to in the American Bajas, keeping a ferocious pace throughout the day. Brabec’s win allowed him to climb to eighth overall. “We have finished this second part of the marathon, in which we weren’t allowed to receive any assistance. The type of stage today was very similar to the races we have in California and I felt very comfortable, much more than yesterday, which was horrible for me, because I’m not a rider who likes mud. Today there were fast tracks and off-piste. The end of the special was good, battling with Antoine Méo. We will continue fighting over the next five days. Every year of the three in which I’ve taken part in the Dakar, stages have been cancelled, which is nothing new. If it’s for our safety, that’s good.”

The other Americans had good days as well. Shane Esposito was 17, one place ahead of Andrew Short. Mark Samuels was 21st. Overall, it’s Short in 23rd, Samuels in 32nd and Espo in 34th.