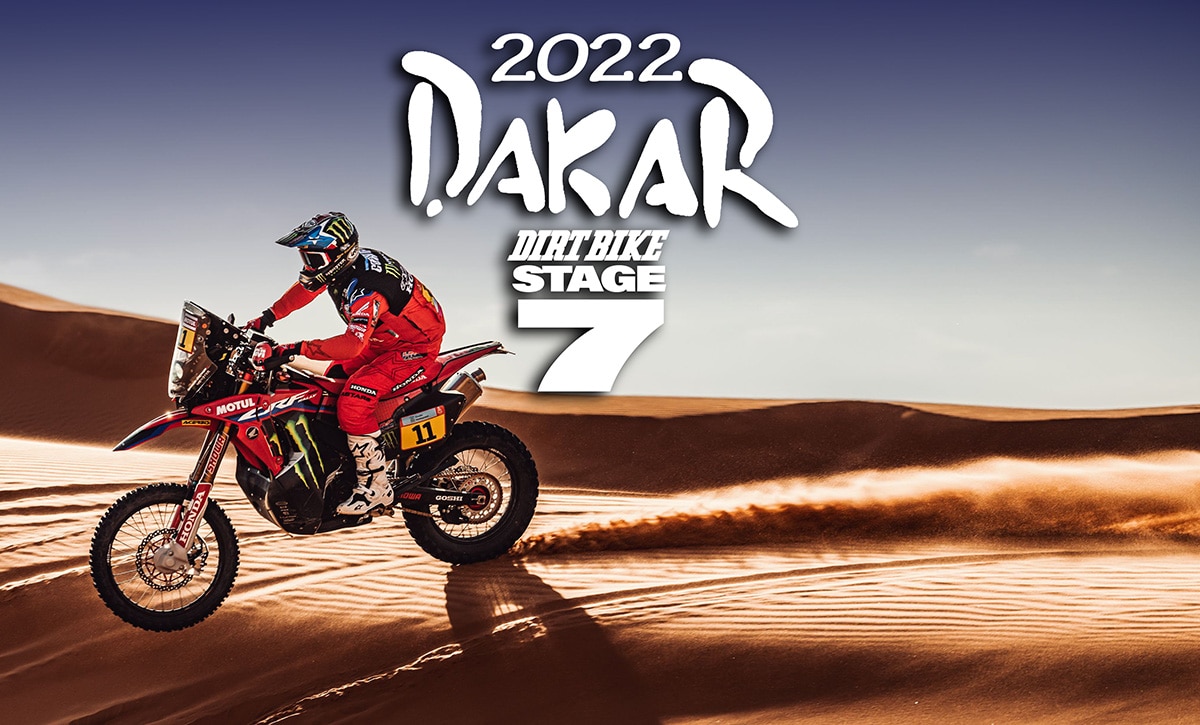 The start of the second week of racing in the 2022 Dakar rally saw another swing in fortunes. The Monster Energy Yamaha team, which failed to even reach the finish in last year’s rally, is now in front, while the charmed run of the GasGas factory team has suffered setbacks.   Chilean ‘Nacho’ Cornejo won today’s stage for Honda, but it was the 10th-place performance of Yamaha’s Adrien Van Beveren that was the most significant. That was enough to give him the provisional lead, while Sam Sunderland and his GasGas struggled in to a 28th place finish, losing 25 minutes to the leader. Even worse for the GasGas team, Danial Sanders crashed, fracturing his arm and is out of the race. Sanders and Sunderland were forced to open the course after their 1-2 performances in stage 6, and navigation was particularly difficult after heavy rain. The Americans all had good days, led by 2020 champion Ricky Brabec in seventh and Andrew Short in eighth. The fantastic run of 20-year Mason Klein continues, with a 13-place finish. He now sits in 12th overall and has a commanding lead in the Rally2 class for privateers.

Jose Ignacio Cornejo: “Today was a good day. I started from a nice position, so I hoped to take the opportunity to attack, make up some time in the general classification and maybe even the stage victory. In the end, I achieved both of them. I tried to stay calm, to keep my concentration and not get lost with the navigation and that’s the way it worked out. I’m happy for my fourth victory in the Dakar, the first of this 2022. The bitter taste of the first days is behind us and we are highly motivated for the week to come. We will fight until the end.”

Ricky Brabec: “It was a good day for the team. It was long and rocky, but it was good. Some mistakes by other drivers allowed Pablo and I to open the last part of the special. It was a good team effort. We made up a good amount of time and we just have to keep pushing. The results are crazy, there are five days left and hopefully we can stay this strong and make it to the finish line. I’m outside the top ten, but I’m keeping my fingers crossed that I can get on the podium in Jeddah.”

Andrew Short: “It took a while to get going today after having a day off yesterday with the rest day, but I started getting back into the swing of it as the stage went on. There was a lot of tricky navigation today, especially with some valleys and canyons thrown in there as well as a lot of sand that had been washed into them. But overall, it’s great to tick another stage off and play a part in a positive day for the team with Adrien now leading and Ross back in the race as well.”