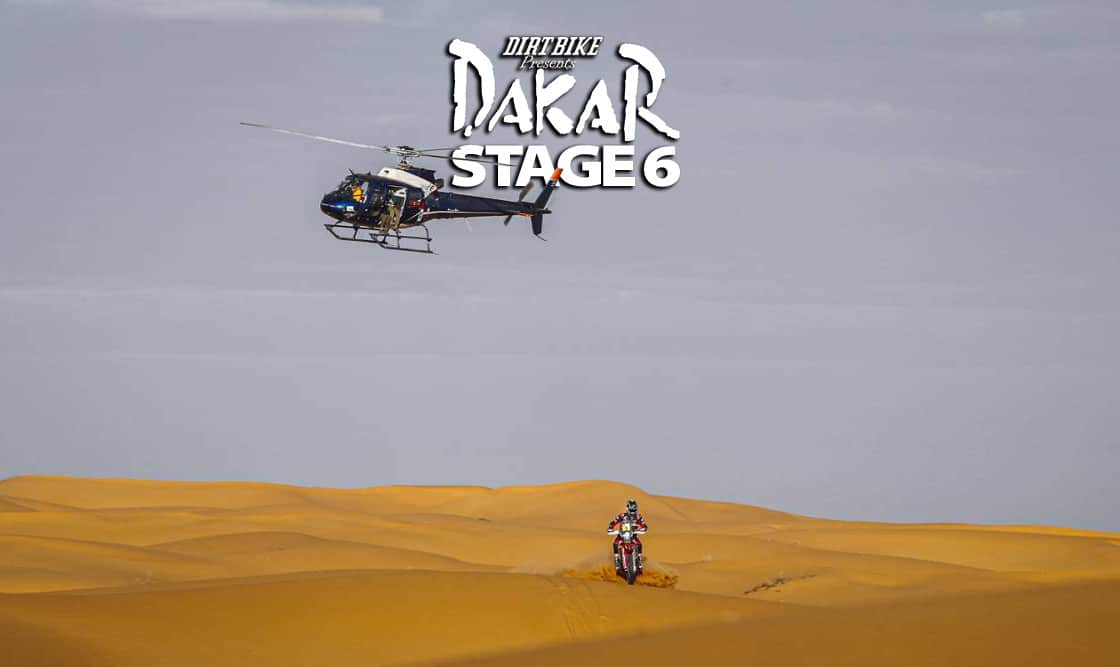 With half of the 2020 Dakar rally complete, American Ricky Brabec has run a near-perfect race so far. He won his second stage of the rally today, extending his overall lead to over 20 minutes going into the rest day. Misfortune hit several other riders on stage six, most notably Brabec’s Monster Energy Honda teammate Kevin Benevides. The Argentinean started the morning in third place in the general standings and has been ultra-consistent, achieving four finishes in the top four on five stages. However, his Honda suffered an engine failure forty kilometers before the finish.  Also on this misfortune list was Toby Price, winner of yesterday’s stage and second overall going into today. A technical problem sidelined him for almost 20 minutes, although the Aussie is still in the hunt.

The final leg of racing before the rest day featured a long 830-kilometer stage incorporating a 477-kilometer special ridden entirely in sand. Riders had to conserve their fuel, their machines as well as their energy on what many are calling the toughest stage of the rally so far.

Andrew Short also put in an excellent performance on the grueling special. Andrew chose to stop and assist his friend Toby Price. Andrew completed the stage in 24th position, just 35 minutes down on the day’s winner. Placing 12th overall at the rally’s halfway point, the American, who already has two Dakar finishes under his belt, remains focused on successfully completing the 2020 Dakar Rally.

Andrew Short: “It was certainly a very different day for me today. I was really fast at the beginning of the stage – I started third and was able to push right away to try and catch my teammate in front of me. Things were going really good, the sand was a lot of fun to ride. About 50 kilometers from the end I stopped to help Toby. In situations like today you have to think quickly, I figured I was an hour down already in the overall after a tough couple of stages early on, so I helped my friend. Overall, I’m happy because I rode really well today and was able to mix it with the top guys. Some rest tomorrow will be good, and then it’s all systems go for the second half of the race.”

With Andrew’s hopes of winning the rally gone, his main task is to assist his teammate Pablo Quintanilla, who now runs second overall.

Pablo Quintanilla: “I’m really happy with my performance today and with my position in the standings before the rest day. The stage was really tough for the guys at the front as we knew we would be finding the line for the whole way. We were able to set a solid pace and I didn’t lose so much time, which was good. The stage was really fast with long caps between camel grass and dunes. Towards the final 50 kilometers my body was really starting to feel tired. I’m looking forward to the rest day now and then hopefully I can have a good second half to the rally.”

Day five winner Toby Price had the unenviable task of leading the motorcycle class out into the longest timed special of the rally so far. With the best part of the stage complete, a technical issue forced the Australian to stop. Price lost around 10 minutes and finished 11th fastest on the stage. However, with six days of racing remaining, Price still lies in a provisional third overall and is fully focused on regaining the lead of the rally.

Toby Price: “It’s been a long stage today with long liaisons, definitely one of the toughest so far. Leading out was going really well for most of the day – I was navigating good, my pace was good, but then at about 390 kilometers I had an issue and had no choice but to stop. Luckily another rider was able to help me out and I got going again. I lost some time, which is frustrating but we’re only at the halfway point now and there’s a long way to go.”

Skyler Howes keeps plugging away, working his way closer and closer to the front. With a 10th place finish only 15 minutes behind Brabec, he’s now in eighth overall.

Sklyer Howes: “Needed a Hyabusa for today’s special! Had a solid day, caught up to Adrien Metge first thing and we paced each other the entire way putting in a decent ride! Had a little tip over right in front of a camera man so chances are that will make the program. Ended the day with 10th on the special and up to 8th in general ranks! Now time for rest day.”

JAMES STEWART BREAKS DOWN A1, JUST AHEAD OF THE 2020 ST LOUIS SUPERCROSS