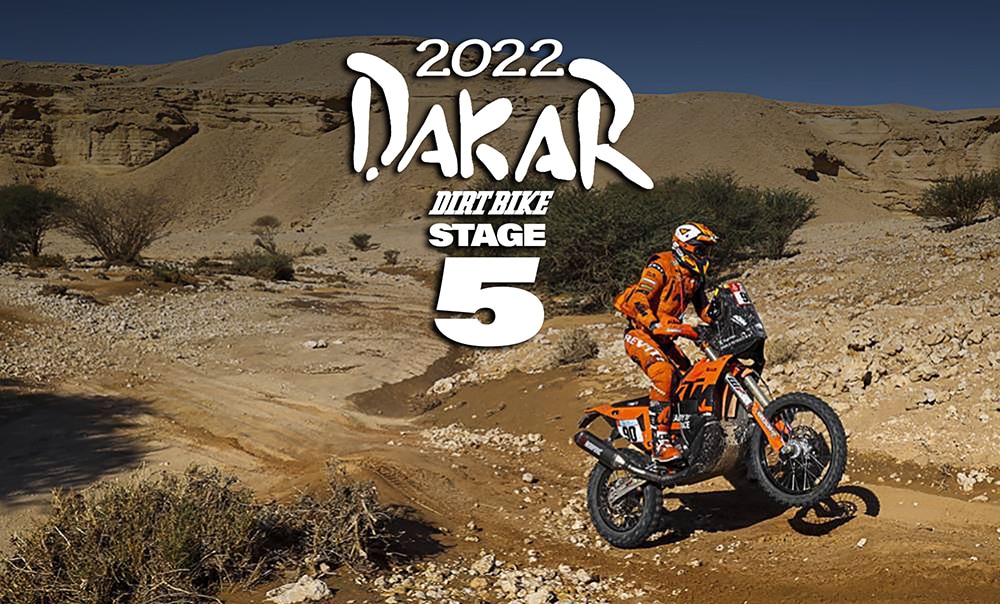 Stage 5 was a day of mixed fortunes, particularly for the American riders. Skyler Howes suffered a crash towards the end of the 346-kilometer special. Although able to finish as the ninth fastest rider, he was then taken to hospital for medical checks. Reportedly, he didn’t even remember the crash, so medical officials decided not to let him continue. Ricky Brabec, on the other hand, had a great day, finishing fourth on time and moving up the overall standings. Likewise Mason Klein and Andrew Short had excellent days.

The fastest man at the finish seemed to be Toby Price. He was subsequently penalized 6 minutes for speeding, which gave the stage win to Danilo Petrucci, the MotoGP star who is in his rookie Dakar Rally. Petrucci suffered a fuel pump failure earlier in the rally, and incurred a massive penalty, which took him out of the overall standings. Sam Sunderland continues to run a tactically brilliant race, finishing outside the top 10 but remaining in the lead overall.

Today was the first of the two looping routes in Riyadh where – for the first time in Dakar history – the motorcycle riders rode the entire stage completely autonomously from the car and truck categories. The fifth stage of the rally was battled out over a 346-kilometer special stage, covering hard and stony ground and including, towards the end of the day, a 50-kilometer stretch of dunes.

Ricky Brabec: “One day before the rest day. It was a good day. We started off a little bit slow this morning. We were a little bit cold. The navigation was really tricky in the morning. Not super tricky as far as technical goes, but a lot of quick notes and a lot of quick turns. We really didn’t start picking up the speed until kilometer 60. For me, to get going this morning was a little bit tough but I managed OK and made it to refueling. After refueling it started to open back up. There was a sandstorm. It was wild; you couldn’t see much. One more day to rest day. We’ll keep on fighting to the end.”

Andrew Short: “Stage five was pretty good for me although it took a while for me to really get going. The early part of the stage was tricky, some roads and rocky sections, but when it opened out into sand dunes it was pretty awesome. I felt better as the stage progressed and overall, I’m really enjoying my time here. The bike is running great so if I can continue like I am throughout the rest of the rally with these good results then I’ll be happy.”

Mason Klein: “I finished kind of right where I wanted to today still in the top ten but not on the podium. Trying to figure out these Dakar games and get out of the Yo-Yo everyone always talks about. I want to finish top ten every day not on the podium 1 day and the next day
not. Can’t wait for tomorrow.”

JEREMY MCGRATH’S YZ250: BEHIND THE BUILD