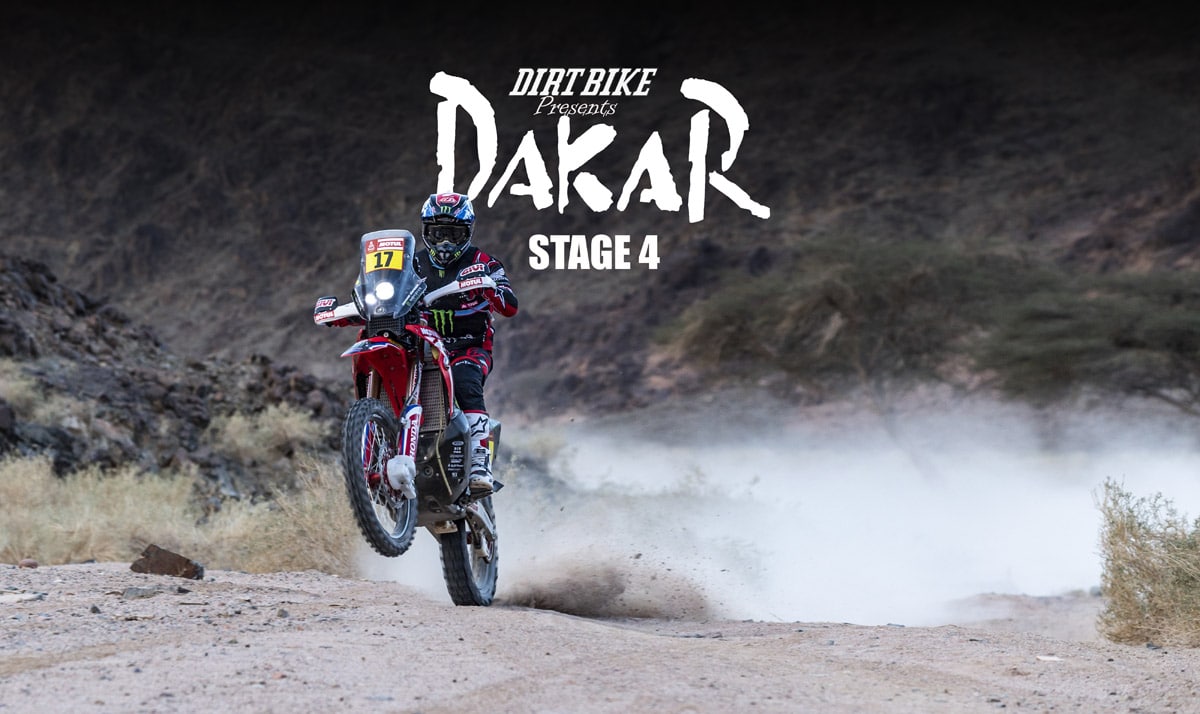 On stage four of the 2020 Dakar Rally, American Ricky Brabec survived the thing that most Dakar competitors dread most: starting up front. After winning stage three, it was up to him to open the course. With elite riders starting in 3-minute intervals this year, it’s entirely possible to ride a stage without seeing anyone else. His Honda teammate Jose Ignacio Cornejo eventually caught him and the two rode together to the finish, with Cornejo collecting the stage win and Brabec maintaining the overall. 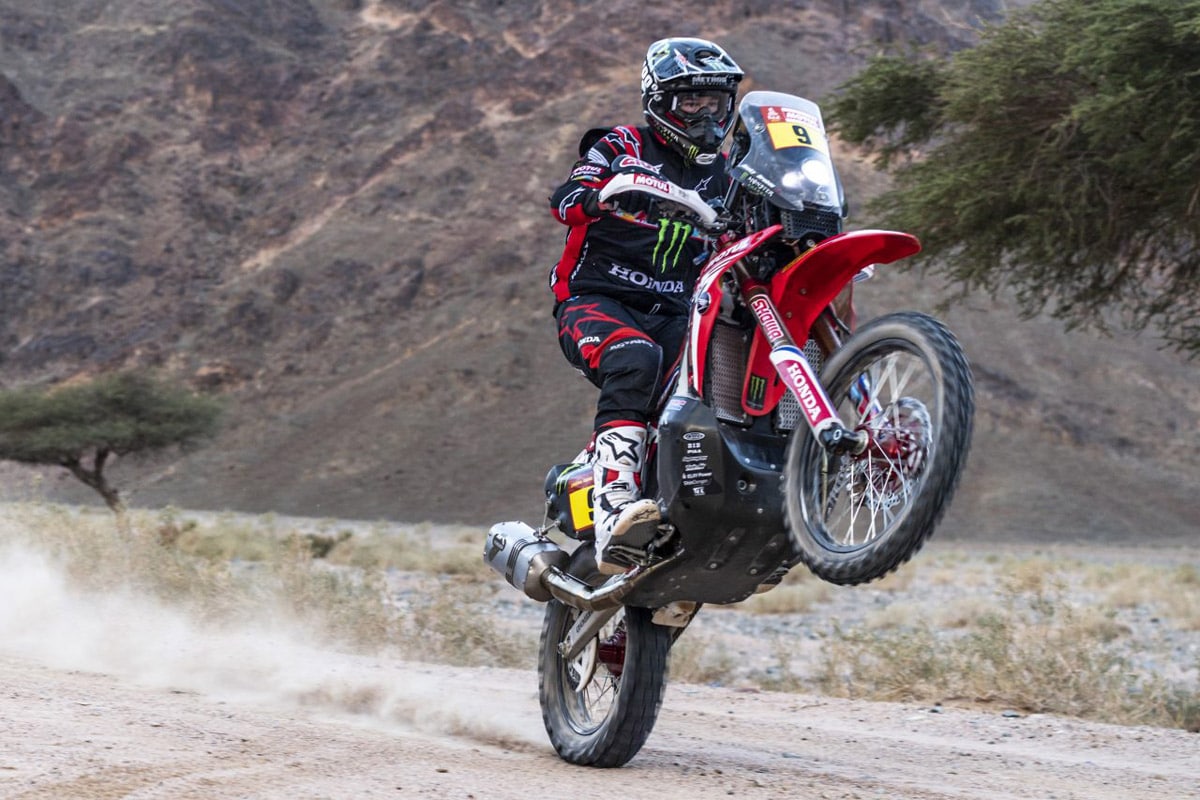 Ricky Brabec: “The day was good. I didn’t have the best starting position. I started first. I was kind of nervous and I thought that I would lose a lot of time today. I’m very happy. I rode in front all day long. Then eventually my team-mate Nacho Cornejo caught up with me. We rode together from maybe kilometer 250 to the finish. We did really well. It was a really long and tiring day for the mind and the body. We are still healthy and the bikes are good and all the riders are still here. We have a couple of days left. We are going to rest and suit up for tomorrow.” 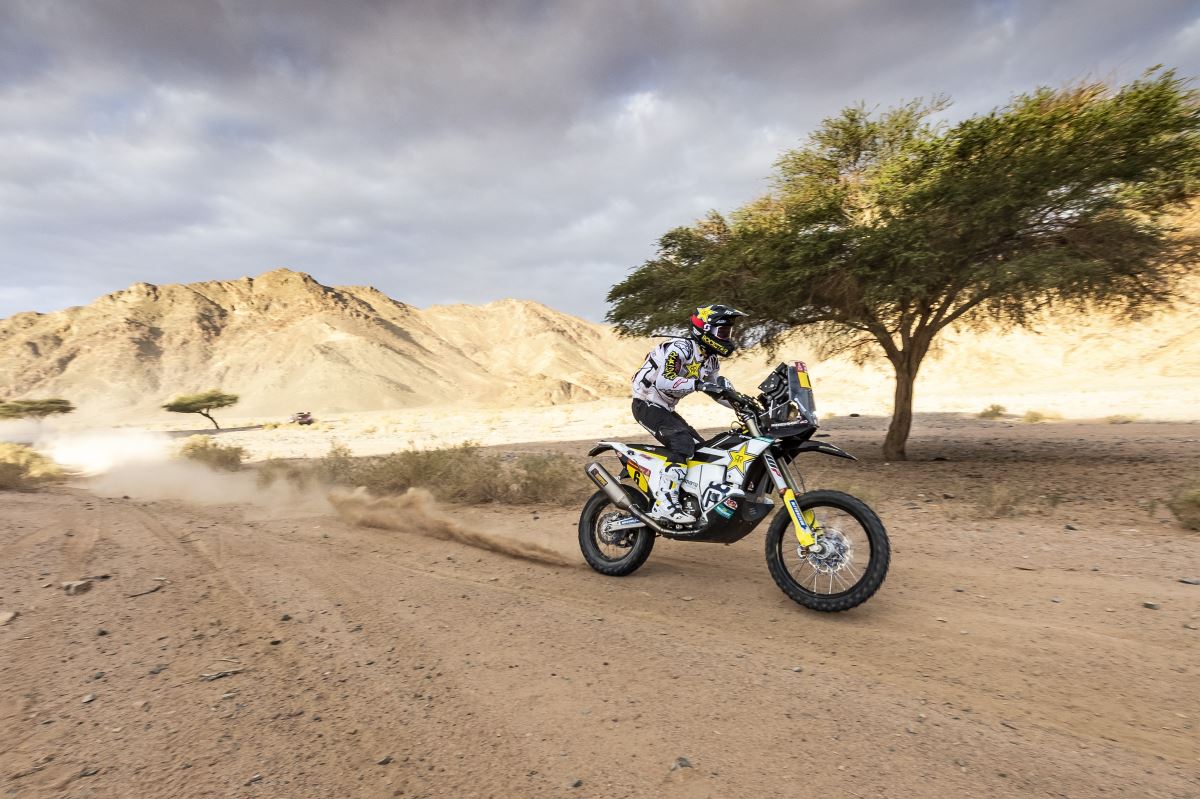 With Andrew Short collecting a 30-minute peanlty yesterday, his chanced at a top finish are thin. He rode at a safe pace to catch many of the riders up front. A couple of mistakes later in the stage ended up costing the American some time, but he was able to bring his Husqvarna home safely in 13th place, less than 10 minutes down on the eventual stage winner.

Andrew Short: “I think that has been one of the most difficult stages to navigate in my career. The terrain made it so that every time I tried to go fast I either got lost or had a crash. Thankfully, I only had one big crash during the day but there were a few times when I just slid out on the turns because of the stones. About halfway through the day I broke the switch that controls the fuel tanks, so that made things even more difficult. It’s frustrating and really tricky to find the right speed – if you ease off you can see the dust ahead of you disappearing, if you push too hard you get excited and make a mistake. Overall, I know I have the pace, I’m just finding it hard to get the right rhythm. It’s another day tomorrow and my body is feeling better than it was so I’ll try to do my best as always.”

The American with the second best score  is now Skyler Howes, who finished the day in ninth and sits in 10th overall.

Skyler Howes: “Today was tough, I was not feeling the rocks so I just rode my pace. Fortunately, this gave the front of the pack time to figure out the tricky navigation spots and allow me to not lose much time on the stage. I’m definitely looking forward to the sand dunes tomorrow.”

Garrett Poucher: “Today had some really tricky navigation. I ended up getting lost with a couple other riders, but was able to sneak away and find the correct route without anyone noticing. This gave me a slight advantage that I will need heading into tomorrow’s stage. We have a lot of dunes tomorrow and I am not that fast in them.”